Mr. Ericksen Goes to (the Other) Washington 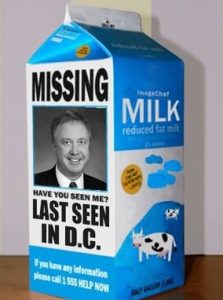 A storm of opprobrium has greeted state Sen. Doug Ericksen after taking a temporary job with the Environmental Protection Agency’s transition team while leaving his neglected 42nd District constituents without representation in Olympia. And it seems that the unspoken goal of this Trump toady is to collar a lucrative job assignment heading the regional Environmental Protection Agency (EPA) office in Seattle.

On Monday, Jan. 23, 2017, three days after the inauguration, news broke that Ericksen and former state Sen. Don Benton of Washington’s 17th District had been tabbed by administration forces to serve on a “beachhead team” taking over the EPA reins. Not surprisingly, the two had headed the state campaign for Trump, organizing rallies in Spokane, Lynden and Everett and directing other state affairs for him.(1) It was obvious payback for their early support.

Within days, Ericksen found himself in the national-media crossfire as the communications director for the EPA transition team. On Tuesday, Jan. 24, 2017, the Associated Press reported about a “media blackout” at the agency, which was also barred from awarding new contracts or grants. “We’re just trying to get a handle on everything and make sure what goes out reflects the priorities of the new administration,” explained Ericksen from the murky waters of “the swamp.”(2)

But veteran EPA observers were not fooled by the doublespeak. “We’re watching the dark cloud of Mordor extend over the federal service,” said Jeff Ruch, executive director of Public Employees for Environmental Responsibility. Sierra Club climate-policy director Liz Perera warned that these attempts to freeze EPA communications and contracts should serve as “a major red flag for all Americans.”

By Tuesday, it seemed that the political tampering would extend even to the scientific information on the EPA website, including that about climate change. The Associated Press and New York Times quoted Ericken as saying the review would extend to “all existing content on the federal agency’s website, including details of scientific evidence showing that the Earth’s climate is warming and man-made carbon emissions are to blame.”(3)

“We’re taking a look at everything on a case-by-case basis, including the web page and whether climate stuff will be taken down,” added Ericksen. Asked whether that included routine data collected by agency scientists, such as on air and water pollution, he replied, “Everything is subject to review.”

William K. Reilly, who served as EPA Administrator under the first President Bush, had a dim view of this behind-the-scenes manipulation, saying the agency was “going down a very dark road” regarding its scientific output.

Jared Blumenfeld, who had served as regional EPA Administrator for California, compared what was happening to a hostile corporate takeover. “Ericksen and these other folks … have basically put a hold on everything,” he observed. “The level of mismanagement being exercised during this transition is startling and the impact to the public is alarming.”

But on Wednesday, Jan. 25, 2017, Ericksen began walking it back. Under the new administration, he wavered, the agency would focus on “its core mission, which is to protect the environment and public health.”(4) And he backpedaled even further on the EPA website. “We’re looking at scrubbing it a bit, putting a little freshener on it, and getting it back up to the public.”(5)

It had been a bruising baptism of fire for our fair-haired local boy during his first week in the Other Washington.

When Ericksen returned to Olympia on Feb. 1, 2017, having been missing in action for over a week, he faced another political firestorm. “If Ericksen’s priority is in Olympia, he should be there full time,” read a Seattle Times editorial.(6) “If not, quit the Senate and let a replacement be appointed.”

The Republican-controlled Senate had scheduled a floor vote on its education bill that same day, but the vote had to be hastily rescheduled after Ericksen’s flight from Reagan Airport was cancelled — as was a press conference that morning and afternoon committee meetings.(7)

The floor vote came late that afternoon, with a 25-24 margin in favor and no Democrats supporting the bill. Without Ericksen present, it would have been tied, leaving Lieutenant Governor Cyrus Habib able to break the tie and reject it.

At his rescheduled press conference Thursday morning, the AWOL senator was all smiles and excuses, blaming Democrats for trying to take partisan advantage of his double dipping. “People in my district say they like what’s happening now,” he claimed (but see below).(8)

Questioned about his EPA activities, Ericksen replied that the Trump forces “want to expand the science at EPA to give voice to other views on climate,” which implied that these (likely unscientific) views had somehow been suppressed by the Obama administration.

Washington state Democrats wasted little time in reacting to his statements. “It’s outrageous for Doug Ericksen to claim that he can responsibly serve the people of Washington state and the people of the 42nd legislative district while also working in Washington, D.C., for Donald Trump,” objected party chairwoman Tina Podlodowski in a press release.(9) “He has missed a myriad of votes, is inaccessible to the people who live in his district and is not attending to critical issues here in Washington state, especially solving the education funding crisis.”

Sen. Kevin Ranker of Orcas Island and the 40th legislative district, a long-time member of the Energy, Environment and Telecommunications Committee, chimed in, saying, “I actually believe that government is supposed to govern.”

Ericksen’s chair was conspicuously empty at a Feb. 7, 2017, Committee hearing at which a climate-change denier he had invited, Tony Heller, was testifying — though he called in briefly to introduce the speaker. An electrical engineer with no special training or expertise in climate science or history, Heller had claimed that “global warming is the biggest fraud in science history.”(11) He argued that “fraudsters at NOAA and NASA” had been tampering with temperature data, thus making it only seem that global warming was happening. Perhaps this was one of the “other views” that the Oracle of Ferndale thinks will now be heard at EPA.(12)

Ericksen has long trafficked in such “alternative facts,” as Sen. Ranker characterized Heller’s statements. (Others would call them “lies.”) Starting in 2013 and perhaps earlier, Ericksen has abused his committee chairmanship to publicize the fringe views of such climate-change deniers.

Harsh Criticism in Whatcom County
But Ericksen’s constituents are beginning to get tired of his truancy — and of having to endure his antics on behalf of right-wing think thanks and their wealthy, oil-soaked financiers.

On Jan. 29, 2017, Dr. Michael Shepard of Bellingham filed a formal complaint to the Legislative Ethics Board. “The people of the 42nd District elected Sen. Ericksen to represent the needs of our district and state,” it read.(13) “This is a significant job that requires his full attention.” The Board is evaluating this complaint.

Letters to the editor have begun pouring in to the Bellingham Herald, Cascadia Weekly and even the Lynden Tribune, asking Ericksen to halt his double dipping and get back to Washington state to do the job he was elected for. “From where I sit, here in the 42nd, it feels like the people of Whatcom County are being ignored while you advance your career,” wrote Brian Sibley of Bellingham.(14)

And a Twitter account Where’s Doug? (@wheresdoug42) established in late January already has nearly 400 followers. “The Transportation Committee met again with no Sen. Ericksen,” reads a Feb. 6, 2017, entry. “He has been to one hearing and missed 11.” And a petition on the Change.org website demanding that Ericksen resign his senate seat or refund half his salary has received more than 1,800 signatures.

That same day Shepard and others submitted a recall petition from “concerned citizens of the 42nd District” to the Whatcom County auditor. “Our senator prides himself on being a fiscal conservative,” said Shepard afterwards, “and yet we’re seeing him get paid a full salary not to be doing the work of the district.”(15)

Indeed, Ericksen has a history of using taxpayer funds to further his personal political agenda and career. Last year’s Lynden rally, for example, had cost local city and county agencies nearly $129,000 — and a total of over $302,000 state wide — to cover the extraordinary security costs for that highly charged event.(16) This total comes to five or six annual teacher salaries, which should be considered taxpayer subsidies of Ericksen’s job search.

In a unanimous resolution on 26 September 2016, the Whatcom County Council approved a letter to the Trump campaign organization, Benton, Ericksen and others requesting reimbursement of $53,000 the county spent for rally security. But as of Feb. 10, 2017, no reply to this letter, and no payment of these burdensome costs — which could have been much better spent on pressing educational needs — had been received by the County Council or County Executive.(17)

Ericksen has obviously gotten where he is today, with an influential Trump administration job, by riding on the backs of local, county, and state taxpayers. This is ironic, given his advertised fiscal prudence, as Washington voters favored Hillary Clinton overwhelmingly in the general election — by margins of 52 to 36 percent statewide and 55 to 37 percent in the county. Even in Doug’s more conservative political redoubt, the 42nd District, she beat Trump handily, by 48 to 44 percent.(18)

It’s therefore difficult to avoid concluding that Whatcom County has an alien political presence representing it (or not representing it), espousing environmental policies completely at odds with the solidly green preferences of a large majority of its citizenry. And he has just gained a national pulpit from which to broadcast right-wing climate opinions with little if any basis in scientific evidence.

An EPA Regional Administrator?
What makes this especially worrisome are recent reports that Ericksen’s immediate goal is to take over as Administrator of EPA’s Region 10 office in Seattle, coordinating agency activities in Alaska, Idaho, Oregon and Washington state.(19) With a staff of over 500 and a budget exceeding $300 million, this office coordinates support for such projects and groups as the Puget Sound Partnership and Northwest Indian Fisheries Commission. It works closely with Environment Canada on efforts to restore the ecological health of the Salish Sea.

Ericksen’s “beachhead” assignment is part of tear-it-down administration plans to gut the agency, led by its nominee for EPA Administrator, Scott Pruitt, who was narrowly confirmed by the U.S. Senate on Feb. 17, 2017. As Oklahoma attorney general, prodded by fossil-fuel industries, he repeatedly sued the agency over its mandates — most notably President Obama’s Clean Power Plan to reduce carbon-dioxide emissions from power plants.

Benton, Ericksen and Pruitt are key players in a secretive plan hatched by the EPA transition team to undermine the scientific basis for its environmental policies and to reduce or eliminate its funding for scientific research.(20) In Ericksen they probably think they have found their mouthpiece. But he obviously has little understanding of evidence-based science, given his promotion of climate-change deniers to speak at length in his committee hearings — another abuse of taxpayer funds.

Ericksen sports one of the worst ratings on the Washington Conservation Voters website: only 6 percent over his tenure in office. Is this oileaginous politician the person that we of the Evergreen State and the rest of the Pacific Northwest want to see in charge of EPA’s Region 10 Office?

16. Michael Riordan, “Behind the Veil at the Lynden Rally,” Whatcom Watch (October/November 2016), pp. 6-7, esp. table of costs on p. 6. http://whatcomwatch.org/index.php/article/behind-the-veil-at-the-lynden-rally/