Behind the Veil at the Lynden Rally

At first, state Senator Doug Ericksen seemed happy to take credit for bringing the Trump rally to Lynden last May (see September 2016 Whatcom Watch, page 1). But that was before the mounting costs of the massive police presence at the event, which eventually ballooned to hundreds of thousands of dollars, began to roll in. What follows is an account of how it all came together behind the scenes, based in part on emails, text messages and other documents uncovered by Amy Glasser and Sandy Robson.

Early in the evening of May 4, 2016, Whatcom County Sheriff Bill Elfo took a phone call from Ericksen, who told him that a political rally for the real-estate mogul might occur in Lynden on Saturday, May 7, a mere three days away. Plans for holding the rally at Seattle’s Boeing Field had fallen through because the required permits could not be obtained. So Ericksen had contacted political allies in Lynden to determine whether it could be moved to the Northwest Fair and Event Center in that town, which for some reason did not require any permits for such a major event, likely to attract thousands. Contract negotiations were under way.(1)

Elfo quickly relayed the information to Whatcom County Executive Jack Louws and Lynden Police Chief Jack Foster, among others, saying the “decision on whether the campaign will proceed with this plan will be made tomorrow morning.” Given the ultrashort notice, he added, “planning will be challenging and will likely require the assistance of the WSP [Washington State Patrol] and all county agencies.” (2)

Early next morning, Ericksen notified Lynden Mayor Scott Korthuis about the rally in a text message and then a phone call giving more details. At 2:19 pm that Thursday, Ericksen again texted the mayor, saying the rally would indeed occur. “Thanks for putting Lynden on the map!” Korthius later replied. “This will be great.”(3)

Elfo got official word from campaign staff about an hour later. He emailed Louws, Foster and others that “the Lynden event WILL occur” on Saturday afternoon, only about 48 hours away, advising them that “I do remain concerned about our ability to appropriately prepare at this late date and time.”(4)

After confirming it would indeed happen with Secret Service Special Agent Dan Robinson, he swung into action that evening to get the necessary police and other security services into play.(5)

These communications set in motion a frantic series of actions and events that were to consume the attention of local and state law enforcement officers over the next three days and end up costing Whatcom County agencies and governments over $128,000 in direct expenses. Additional expenses incurred by police departments and other agencies in Western Washington pushed the total direct costs of the rally above $302,000 (see table).(6)

Direct Costs of the Rally

And these figures don’t include the indirect costs of government officials and staff members like Korthuis and Louws — nor those of the FBI, Secret Service and other federal agencies involved in planning and implementing the extensive security for the rally. All told, the bill to local, state and U.S. taxpayers probably came close to half a million dollars, or about $1,000 each for the estimated 5,000 rally attendees (including many from outside the county).

But Mayor Korthuis did not seem worried about the frantic preparations then underway, nor the likely costs to city and county governments. He appeared much more concerned about getting tickets to the rally. “Tickets: need 2 for me, 13 for the city council and 20 for family and friends,” he texted Ericksen that Thursday evening.(7)

Sheriff Elfo could not afford to be so cavalier, for he knew that violence had erupted recently at other Trump rallies, especially one in California. It could easily happen in Lynden, too, given the animosities on both sides. “I am not going to stand by, shirk my responsibility, ignore risks to public safety and allow the situation to devolve into violence, disorder, property damage and the hampering of free speech rights that have occurred at other campaign events across the country,” he later wrote.(8)

With the approval of Louws, Elfo decided to take “a proactive approach” that would require hundreds of off-duty police officers and deputies from jurisdictions throughout Western Washington — including from Bellevue, Everett, Seattle and the Washington State Patrol.(9) To invoke that extensive support, he had to call upon the interagency Allied Law Enforcement Response Team (ALERT), which trains together to be able to respond to major events requiring such a large-scale police response.(10)

Bellingham police and fire departments, as well as the Port of Bellingham, were responsible for security at Bellingham Airport, where Trump’s jet landed Saturday afternoon a half-hour before the rally. The approximately 80 officers there included Bellingham and Everett SWAT teams. An emergency operations center near the airport coordinated event security.(11)

A State Patrol SWAT team accompanied the motorcade from airport to the Lynden fairgrounds. And two SWAT teams, from the Whatcom County and Skagit County sheriff’s offices, were stationed near the rally. Bike units from Seattle and Bellevue police departments patrolled the streets outside the fairground gates, keeping the supporters and opponents apart. In all, there were about 200 police officers present at the rally.(12) This impressive show of force was assembled essentially overnight.

Elfo had even considered declaring an official emergency. He drafted and signed an emergency proclamation stating that “recent campaign rallies have had a history of being politically charged events with protests and counter protests, civil disobedience and violence …”(13) But upon review by the prosecuting attorney’s office, it was apparently deemed extralegal or irrelevant, for such declarations of emergencies usually apply to natural disasters like earthquakes or floods. Louws reviewed but never signed the document, nor was any emergency declared.

With the many armed patrolmen on display, the rally turned out to be peaceful, although supporters and protesters still shouted epithets across Kok Road leading to the fairgrounds. The only arrests were of three demonstrators who attempted to block Guide Meridian shortly before the rally began.(14)

Inside the fairgrounds, Korthuis and his wife stood in the stands right behind Trump, sharing the camera frame and applauding. Thanking Ericksen for organizing the rally, Trump launched into a rambling rant attacking his opponents, both Democrat and Republican. It was largely devoid of serious political substance. 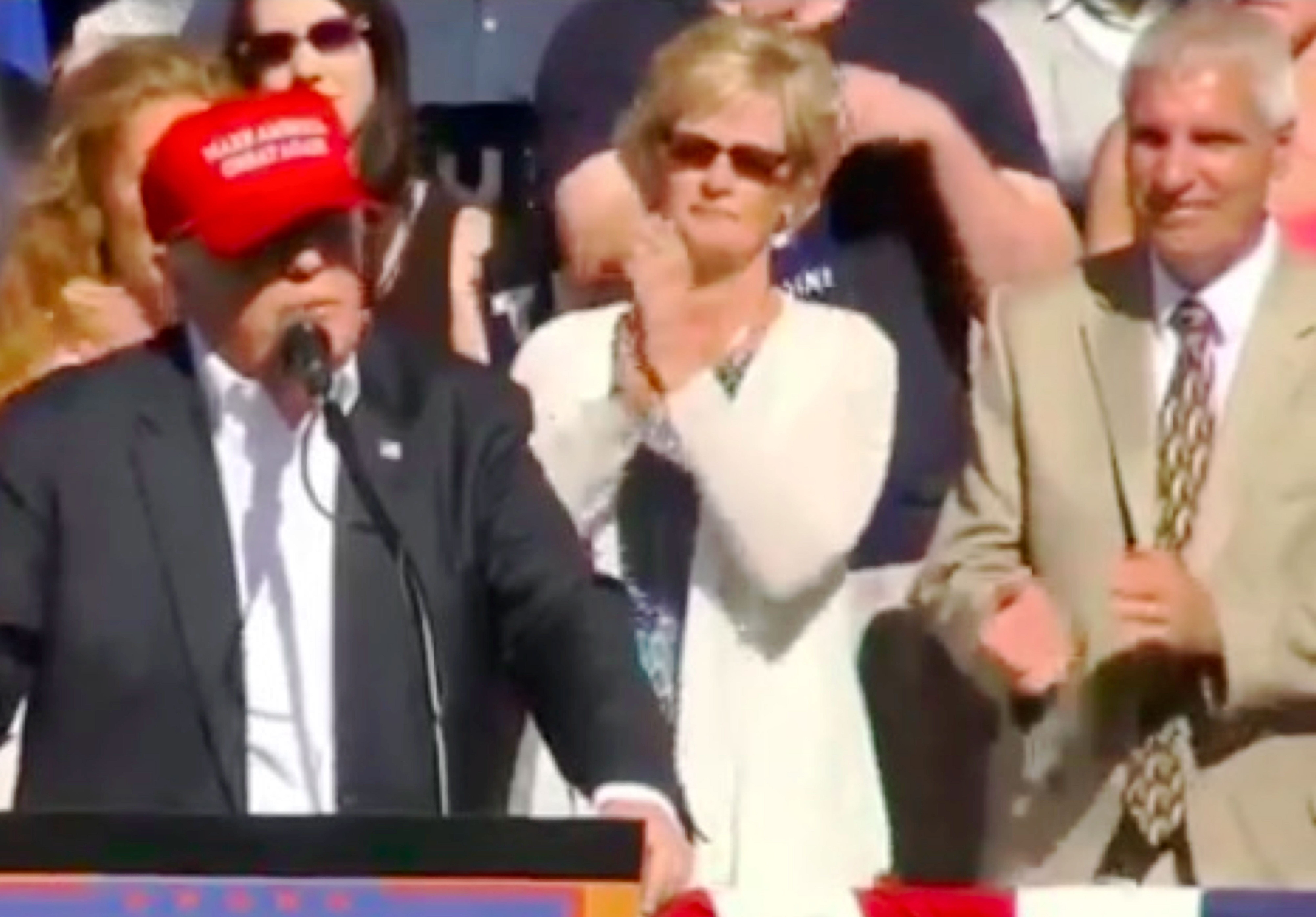 Donald Trump speaking, Lynden Mayor Scott Korthuis on the right and his wife between them.      (from YouTube video of rally, ref. 15)

“We will build the wall,” he proclaimed to raucous applause and sign-waving about halfway through. “It will be a nice high wall; it will be a beautiful wall.”(15) At the end, he shook hands with Korthuis and glad-handed a grinning, grateful Ericksen before departing to rejoin his motorcade. A photograph of that iconic handshake adorns the senator’s Facebook page.

“THANK YOU to law enforcement,” bragged Ericksen on Facebook later that evening. “You were amazing. We showed the country how to do it.”(16)

But that was before the cost figures began to trickle in from the police departments and other agencies involved. By late May, the Whatcom County total had stabilized at about $129,000, as reported by The Bellingham Herald on May 27. Additional direct costs, averaging over $1,100 per officer involved (generally at overtime wages) and including almost $94,000 for the State Patrol, brought the total above $300,000.(17) And there could easily be more such unaccounted expenses, plus indirect costs.

When contacted by citizen journalist Robson about his role in bringing the rally to Lynden, Ericksen curiously did not seem eager to take credit for it. In response to a direct question whether he had had any involvement in the affair, he replied that he was “not instrumental.”(18)

But Ericksen’s denial blatantly contradicts the documented public record and his own words and actions. What seems clear from this record of events surrounding the rally is that he and Korthuis overlooked or ignored the likely burdens on law-enforcement officials and the resulting costs to local taxpayers of bringing the event to Lynden seemingly to further their own personal political agendas.

Michael Riordan, coauthor of “Crystal Fire” and “Tunnel Visions,” writes about science, technology and public policy from his home on Orcas Island where he lives and kayaks.