The Bromance Between the Mogul and the Senator 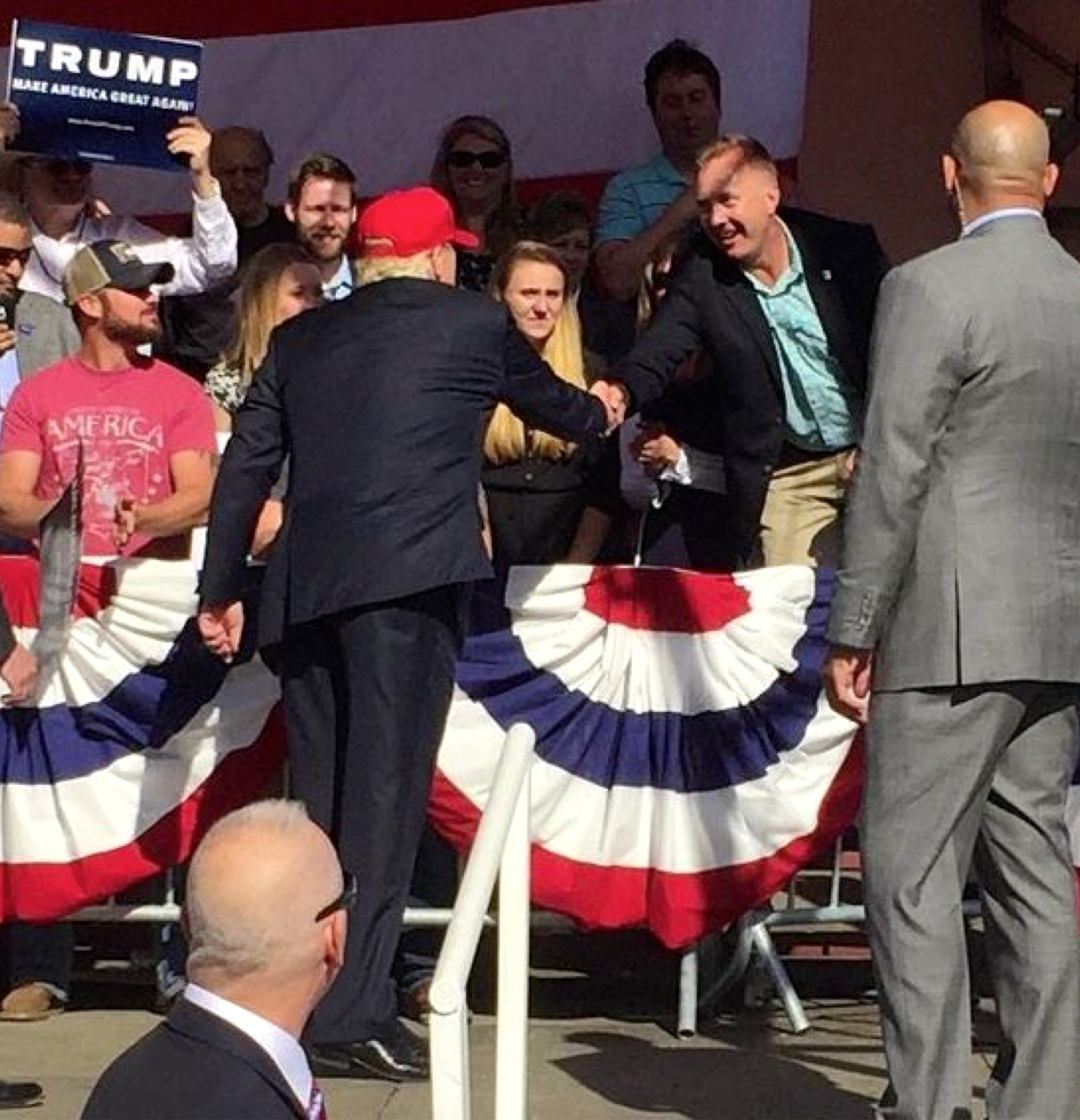 Wake up, Whatcom County friends. Our future livelihoods may be imperiled by an unprincipled, opportunistic local politician.

Your state senator, Doug Ericksen, leads the Washington presidential campaign of a fraud, bigot, fascist and bankrupt — Donald Trump, a man The Washington Post declared “a unique threat to American democracy” whose “presidency would be dangerous for the nation and the world.”(1) The previous week, Republican Jeb Bush called him “a candidate who continues to grotesquely manipulate the deeply felt anger of many Americans.”(2) Former New York City Mayor Michael Bloomberg, an independent, said he is a “dangerous demagogue” and con artist in a nationally televised speech.(3)

This bombastic, narcissistic real-estate mogul, who has no public-service or government experience, once blurted that women should be punished for having abortions. He wants millions of immigrants to be rounded up and deported. He claims he’ll make Mexico pay for building a wall along our southern border to keep out the criminals and rapists he imagines are sneaking across it. He admires Russia’s president, Vladimir Putin, and encourages its cyberburglars to illegally hack the emails of former Secretary of State Hillary Clinton. And he makes explicit or veiled threats advocating use of violence against hecklers and political opponents.

Yet Ericksen thinks this guy, whose strength seems to lie in making schoolyard taunts, would make a good president in these challenging times! In a May 16 Seattle Times editorial, he and fellow state Sen. Don Benton of Vancouver argued that “people are angry, and they are really not interested in more lies and hollow promises from the establishment.”(4) These voters would instead supposedly endorse a ruthless, all-powerful strongman to clean up the U.S. government — an American Caesar, as political analyst Jeff Greenfield dubbed him in Politico.

Ericksen has even gone so far as to use your hard-earned tax dollars to support this mogul’s appearance in the county. When a permit could not be obtained to hold a rally for him last May at Seattle’s Boeing Field, your obliging senator managed to have it staged instead at the Northwest Washington Fairgrounds in Lynden.(5) The expenses for police, fire and other security services tallied more than $155,000 — not including the cost of about 50 officers from the Bellevue and Seattle police departments, plus another 80 State Patrol officers. The total cost to all state and local taxpayers was probably double that figure.(6)

And over $129,000 came from Whatcom County — including $42,217 from the Bellingham police and fire departments and $56,967 from county coffers.(7) In all, that’s enough to pay the annual salaries of two schoolteachers. But when a woman asked Ericksen on his Facebook page who was going to foot this bill, he suggested it should be sent to the liberal groups protesting the event.

A quick glance at photographs of these demonstrations found mostly women and the elderly holding placards, exercising their constitutional First Amendment rights. Hardly a threat. But other photos revealed supporters waving a Confederate flag or sporting T-shirts that read “Trump the Bitch” and “Build a Wall.” Glancing at these angry white men, I began to understand the mogul’s political base — frustrated blue-collar workers fed up with their loss of jobs and status in a globalizing world economy.

This pattern of political recklessness has often characterized Ericksen’s activities in Olympia, where he has chaired the Senate Committee on Energy, Environment and Telecommunications. An avowed climate-change skeptic, he has used this position to block or stall meaningful state legislation on renewable energy and reduction of carbon-dioxide emissions. In a 2013 Senate hearing, he trotted out a retired Western Washington University geologist who questioned well-established conclusions of climate science. Conveniently, no reputable climate scientist was on hand to refute these specious claims or to present the scientific consensus that human-induced climate change is in fact happening.

But we shouldn’t be surprised, given the financial support showered on Ericksen by the fossil-fuel industry, which has contributed tens of thousands of dollars to his election campaigns.(8) He ranks among the state’s top legislators receiving its funds. And in the most recent election year, 2014, he accepted free meals and other perks from industry lobbyists at least four dozen times, according to a Bellingham Herald analysis.(9)
The Republican candidate Ericksen is promoting has denigrated women with less-than-perfect bodies, handicapped individuals, a famous Vietnam War veteran, Gold Star parents and Latinos — including a Mexican-American judge adjudicating a lawsuit against his real-estate “university.” What kind of message does that send to all of us, especially to the nearly 20,000 Whatcom County citizens of Latino heritage?

And what about African-Americans, Asians and Native Americans?

I wonder what the mouthy mogul might have to say about our courageous Lummi friends who finally defeated the Gateway Pacific Terminal project. Despite all of its likely adverse environmental impacts, that controversial project would indeed have generated county jobs — a standard Ericksen position. The mogul, a climate-change denier like the senator, has come out vociferously in favor of reviving the dying coal industry for similar reasons.
Given his staunch support of this man, we have to assume that Ericksen shares his opinions and positions. They’re all part of one package, Doug, you don’t get to pick and choose. A presidential election is not a supermarket. If you get in bed with an 800-pound orangutan, you have to enjoy the close contact. And what does your fealty to him say about your ability to represent your constituents’ interests in Olympia?

The 2016 presidential election offers a stark choice — between reason, tolerance and science on the one hand, and fear, anger and hatred on the other. As Seattle writer Timothy Egan succinctly put it in his weekly New York Times column, this dangerous demagogue is trying to “make America hate again.”(10)

But we don’t have to accept this divisive ruse. For reasonable individuals, who I hope will make up the majority of voters this November, the choice is crystal clear: Hillary Clinton and Tim Kaine, both champions of diversity.

And after this ugly election is over, we need to start organizing for the 2018 state elections with the long-range goal of evicting this erratic politician from office. If we can send packing such industry titans as Goldman Sachs, Peabody Energy and SSA Marine, Doug Ericksen should prove easy fare.

As former Massachusetts congressman and House Speaker Tip O’Neill famously said, “All politics is local.” Having worked together so successfully in opposing the planned coal terminal, let’s begin another vigorous Northwest Washington campaign that will ultimately have similar national ramifications.

4. Don Benton and Doug Ericksen, “State Campaign Chiefs: Why We Are Supporting Donald Trump,” The Seattle Times, May 16, 2016, http://www.seattletimes.com/opinion/why-we-are-supporting-donald-trump-for-president/.

Michaael Riordan, coauthor of “Crystal Fire” and “Tunnel Visions,” writes about science, technology and public policy from his home on Orcas Island.