This Year We Could Really Use Ranked Choice Voting

And here is a chance to try it out! 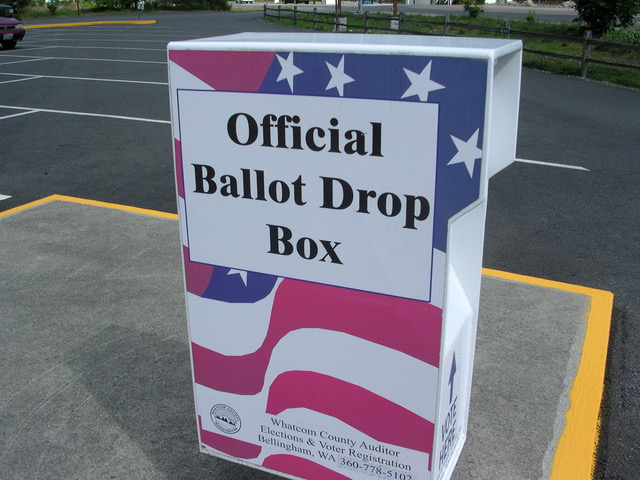 Since 2005, ballots have been mailed to the homes of all Whatcom County registered voters.           photo: Sally Hewitt

This year Bellinghamsters and their neighbors have a huge array of contested elections and the candidates to go with them. Of nine elections total, we have eight — yes, eight! — in which there are three or more candidates. In a year like this, we voters need ranked choice voting and its multi-winner form (proportional representation) more than ever.

What I’ll do in this article is show why ranked choice voting produces more representative results than our current system of winner-take-all elections coupled with a primary. Then, and this is the bonus, you’ll be invited to participate in parallel ranked choice elections for some of these races. You’ll be able to experience both how easy ranked choice voting is from a voter’s point of view and how it avoids wasted votes, the split vote problem and gerrymandering, and, as a result, yields results more reflective of the views of the voters. The parallel elections will of course be nonbinding.

If you want to go straight to the ranked choice elections just go here: www.fairvotewa.org/parallel. In the meantime, let’s see why we would want to switch away from the winner-take-all system.

Winner-Take-All Problems
The next step in the official election process this year will be the primary held on August 6. Primaries were first devised during the Progressive Era. The aim was to put the voters in charge of selecting the candidates of each party instead of leaving it to Democratic and Republican party bosses. When instituted a hundred years ago primaries were a great step forward. Now they are behind the times, especially in Washington’s “top-two” form. They unnecessarily restrict voters’ choices — and can really skew the results — as we will see.

Washington’s “top-two” primary sets all candidates for a given position against one another, no matter what their political leanings, to see which two will go through to the general election in November. It’s a primary just for the sake of having a primary. There’s actually no good reason to cut down the field in this way — or to incur the public expense — and a lot of good reasons not to.

If Independents had been allowed to join in the primaries in 2016, according to polling data, Bernie would have been one of the candidates, and probably would have won. How different things would be now! This is not sour grapes. It’s just about whether primaries yield results that reflect the views of the voters.

The “top-two” primary exacerbates one of the worst tendencies of winner-take-all elections: to restrict elections to two parties. It’s demonstrably false that the 7.7 million people living in Washington state have only two political points of view, not to speak of the 330 million people living in the United States. Yet, because of the spoiler effect and the artificial constraint of “top-two-ism,” voters have to shoehorn themselves into Party A or Party B. No wonder they often say that the government doesn’t represent them. We’ll put aside for now the question as to whether the two establishment parties are different in their essentials.

Skewing the Results
Let’s look at how the primary this year might have turned the results of this year’s elections upside down. We’ll illustrate it with one example, but the same “top-two” tricks could work over each of the eight where there are more than two candidates, depending on the alignment of political forces. Of the eight elections before us, the one where the partisan inclinations of the candidates are clearest is the one for State Senate in the 40th Legislative District. In this race, at least until two of the candidates withdrew, there were six candidates, four of whom considered themselves Democrats. The remaining two preferred the Republican Party. We’ll use that constellation of candidates in this example, because it’s a clear indication of how the “top-two” primary can warp election results.

Let’s suppose the four original Democratic candidates this year split that 60 percent vote, each getting 15 percent. Let’s imagine further that the two original Republicans received the Republicans’ customary 40 percent, and divided it evenly, each getting 20 percent. The voters in this securely Democratic district would have had two Republicans to choose from in November! Without taking sides between parties, it’s pretty easy to see that the potential for a really unrepresentative result was there. (With the withdrawal of one of the Democrats and one of the Republicans, this particular miscarriage won’t happen this year, but why would we continue with a dilapidated election system that allows the possibility?)

These two examples show the Democrats losing by vote splitting. We shouldn’t be too sorry for them. The same thing could happen to Republicans in a district like the 42nd — which the bipartisan Redistricting Commission has handed to the Republicans and where Republicans almost always win.

The vote-splitting problem is an inherent feature of winner-take-all elections, and it’s bad for the integrity of our political system. It inhibits candidates from running. It deters voters from voting the way they really want to vote. And, as we see, the results can be pretty kooky. It’s not the way we should be conducting our elections.

So, we see that Washington state’s very odd “top-two” primary a) doesn’t select a given party’s candidate (the original purpose of primaries), b) unnecessarily limits the field that the voters can choose from, c) has the potential to produce a really unrepresentative result, d) leaves out the younger (and older) voters at an important early stage of the election process, and e) takes a chunk out of the public treasure in order to achieve these curious aims.

It removes the spoiler effect from the general election, but only by artificially moving that defect inherent in winner-take-all elections to an earlier stage in the process.

And, it does nothing to reduce the blight of gerrymandering that has long corrupted our elections across the country, and that is also an inherent feature of winner-take-all elections.

Gerrymandering: Office for Life
People are pretty much aware of the epidemic of partisan gerrymandering that is wrecking American politics. This is the practice by which Democratic and Republican party hierarchies select the voters to preserve themselves in office, rather than the voters selecting their representatives. In Washington state, the two establishment parties get together every 10 years for a lovefest of bipartisan gerrymandering: they just divide up the districts between one another. This in a state where the largest segment of voters consider themselves independent, yet have to vote for establishment party candidates, and have no voice whatsoever in the redistricting process.

What people are not so aware of is that with winner-take-all elections, gerrymandering is inherent. The minute you draw boundaries around a district – with or without partisan intent — you have enclosed a certain composition of voters, and that composition of voters will largely determine the results of elections into the indefinite future. So, even if the politicos are not manipulating elections to keep themselves in office, the structure of winner-take-all elections in and of itself takes matters out of the hands of the voters.

Lisa Ayrault, the volunteer chair of FairVote Washington, tells the story of how, when she was a middle school math teacher 30 years ago, she and her young charges walked through all the various methods for conducting elections. Those seventh graders got it: they unanimously agreed that the winner-take-all system was the worst we could have.

As Maine Goes, So Goes the Nation
For over a hundred years, democracies in the rest of the world have understood the defects in winner-take-all elections and have been switching to ranked choice voting and its form called proportional representation that is best used when electing a legislative body. Beginning with Belgium in 1900, these methods were adopted across nearly all of northern Europe in the first two decades of the 20th century. Since then, the system has spread across the world.

In the United States, ranked choice voting has recently been adopted by Minneapolis, by several cities in California, and by the state of Maine. The city of Cambridge, Massachusetts, has been using it since the 1940s. In 2018, the state of Utah passed legislation allowing cities to adopt it in their local elections. In Maine, it was Democrats who fought for ranked choice voting — in Utah, it was the Republicans.

One of the virtues of ranked choice voting in its proportional representation form is that significant minorities of all kinds (political, regional, race, religion, class, gender) can get representation in proportion to their numbers. The legislative body becomes a reflection of the electorate. As founding father John Adams said of any representative body: “It should be in miniature, an exact portrait of the people at large. It should think, feel, reason, and act like them. That it may be the interest of this Assembly to do strict justice at all times, it should be an equal representation, or in other words equal interest among the people should have equal interest in it.”

With proportional representation, you would not get results like what we saw in the 2013 Whatcom County Council elections, in which 53 percent of the voters won 100 percent of the four seats that were in play.

Another virtue is that the spoiler effect disappears. You can give your first choice to the candidate that you really like without fear that your vote will throw the election to someone you really don’t like.

Ranked Choice Voting: The Basics
The core of ranked choice voting is simple: voters vote for as many candidates as they like and they rank their choices. And here’s the magic: each ballot only counts once even though someone votes for several candidates. In the Appendix to this article, you can see how the vote counting system accomplishes this..

The result is stellar. You can vote without having to dance around the vote-splitting problem. In legislative bodies, gerrymandering is no longer possible. You can dispense with primaries, and with all of their problems of partisan turnout and artificial and potentially skewed reduction of choices for the voters. Candidates are more likely to conduct themselves civilly, focusing on the issues. They can’t trash their opponents; they will be motivated not to alienate voters whose first choice may be one of those opponents.

Try It — You’ll Like It
So that voters can experience what it’s like to vote in a ranked choice election, and so that you can see how it will almost certainly reflect the views of the voters more closely, we’ve set up online parallel elections for three of the races that people in this part of the state will be voting on this year. The races we’ve selected are for State Senate in the 40th Legislative District, for Whatcom County Executive, and for Bellingham Mayor.

To participate in the parallel elections, just go here: www.fairvotewa.org/parallel.

We’ve asked the candidates in the nine local races whether they favor adopting ranked choice voting for our official elections. See the table below. 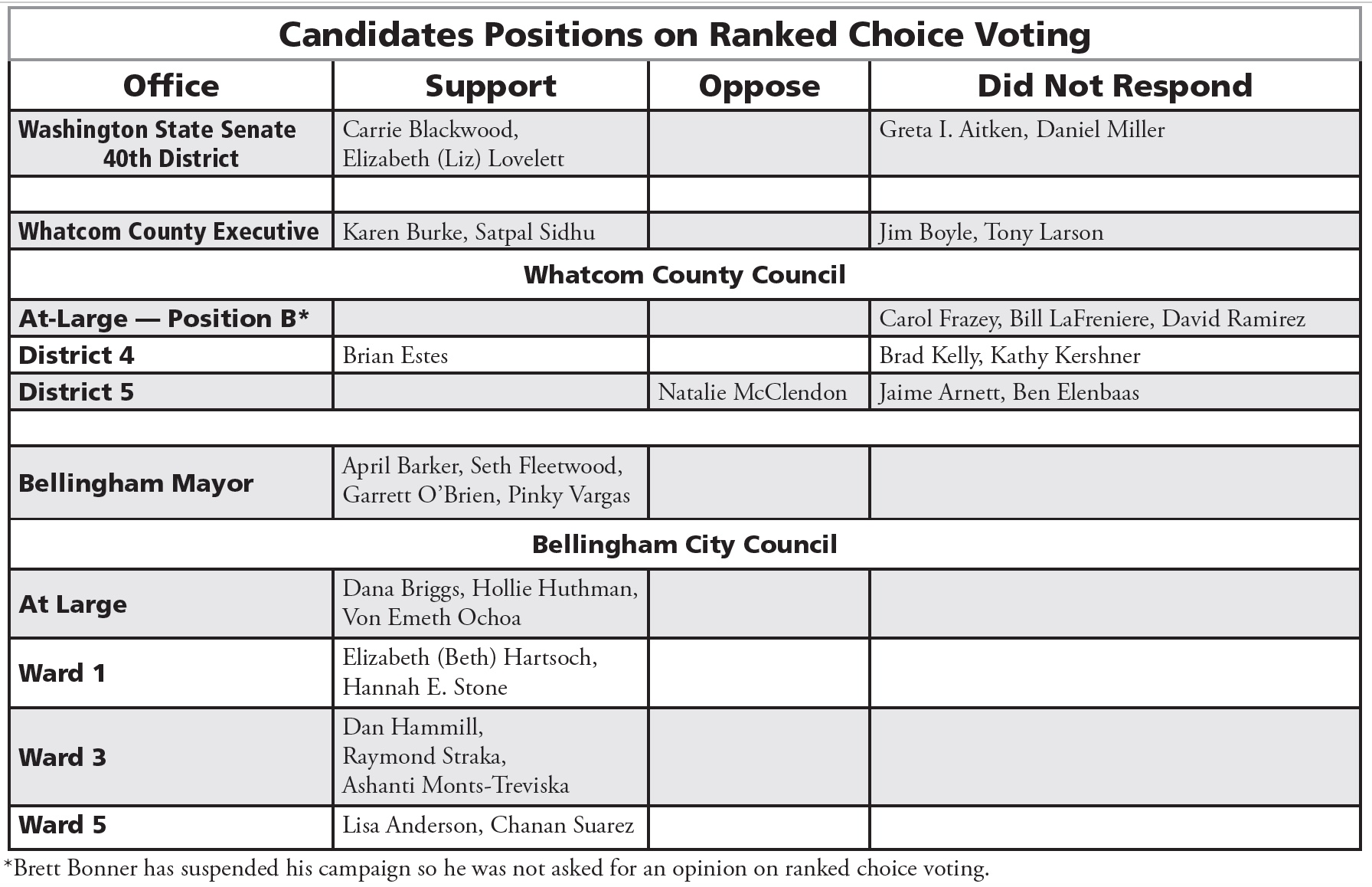 Stoney Bird is a member of FairVote Whatcom. When the Whatcom Charter Review Commission was meeting in 2015, he advocated for proportional representation in electing the Whatcom County Council. The proposal came within one vote of getting on the ballot for the voters to vote on.