How Ranked-Choice Votes Are Counted 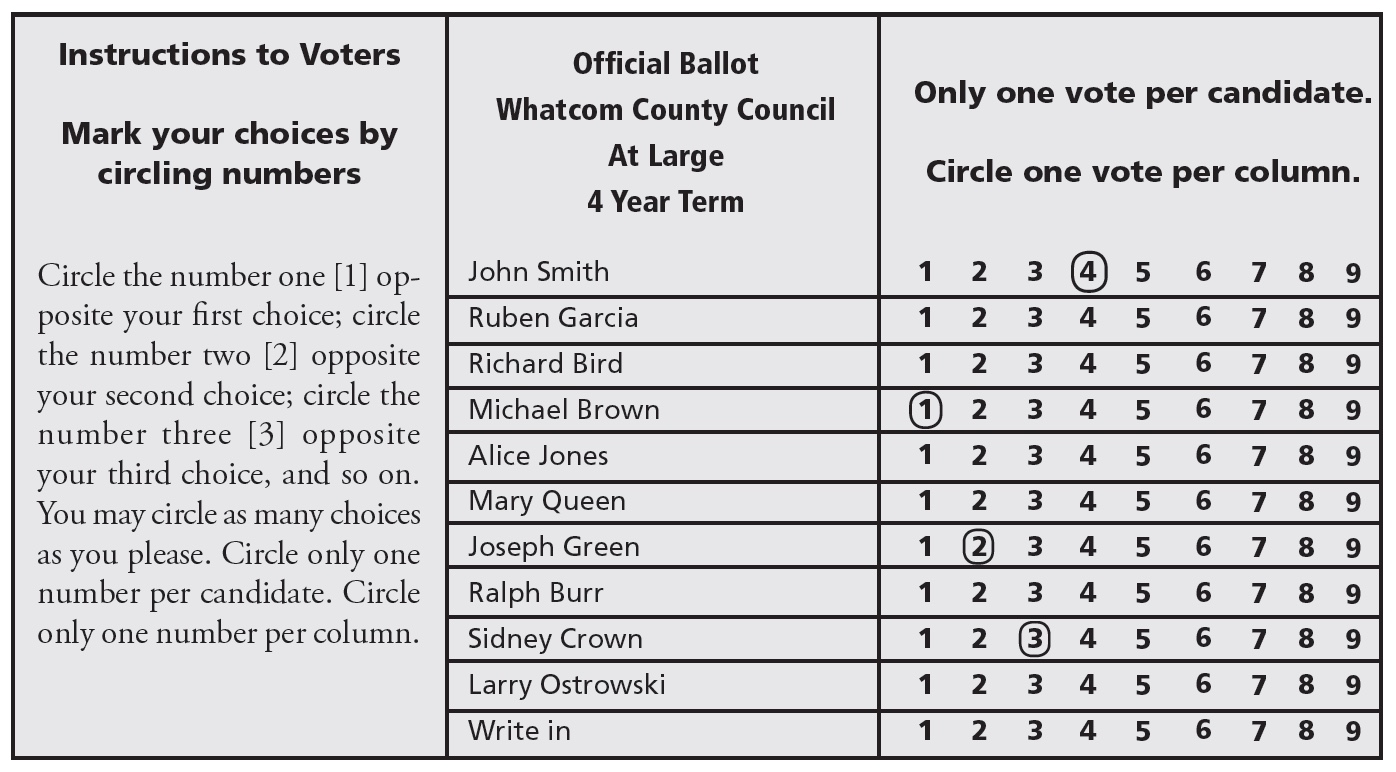 If the election is for a single-winner office, and, if a candidate has a majority after the first round of counting, that person is elected. If no one has a majority, the candidate with the fewest votes is eliminated and ballots that gave that candidate first choice are transferred to the voter’s next choice on the ballot. The votes are counted again, and so it goes until someone has a majority. Truth be told, ranked choice voting may sometimes not produce a majority winner, but it does so much more often that winner-take-all elections do (barring devices like Washington’s artificial “top-two” primary).

If it’s a multi-winner election, there are a couple of other wrinkles. The first step is calculating the threshold for election, which depends on how many seats are being filled in the same election. For example, three seats are up for election on the Whatcom County Council this year. If they were being filled by proportional representation, a candidate would need one-quarter of the vote plus one to get elected.

If we were electing all of the County Council at once (seven seats), the threshold would be one-eighth of the vote plus one.

When people first hear about this way of tallying the votes, it can sound complicated, but I’ll make a few observations. Democracies all over the world have somehow been managing the complexity for over a century. For somewhat less time, the U.S. cities and the state of Maine (mentioned in the main ranked-choice voting article under the subhead “As Maine Goes, So Goes the Nation”) have figured it out, too. Where it has been adopted, voters say they prefer it, feel that their votes count, and feel that the government represents them, all to a greater extent than with winner-take-all elections.

We presently have computers that automatically do the grunt work. All the software vendors are adapting their systems, and the software that the Whatcom County Elections Office purchased about a year ago is capable of being adapted to handling elections of this type. Of course, we will need to make sure that the counting system is secure — just as we do now.

Most of all, the advantages of avoiding wasted votes, overcoming gerrymandering and the spoiler effect, and getting election results that more closely reflect the array of views in the electorate vastly outweigh the slight complexity in counting the votes — at least if we really do want a system of representative government.