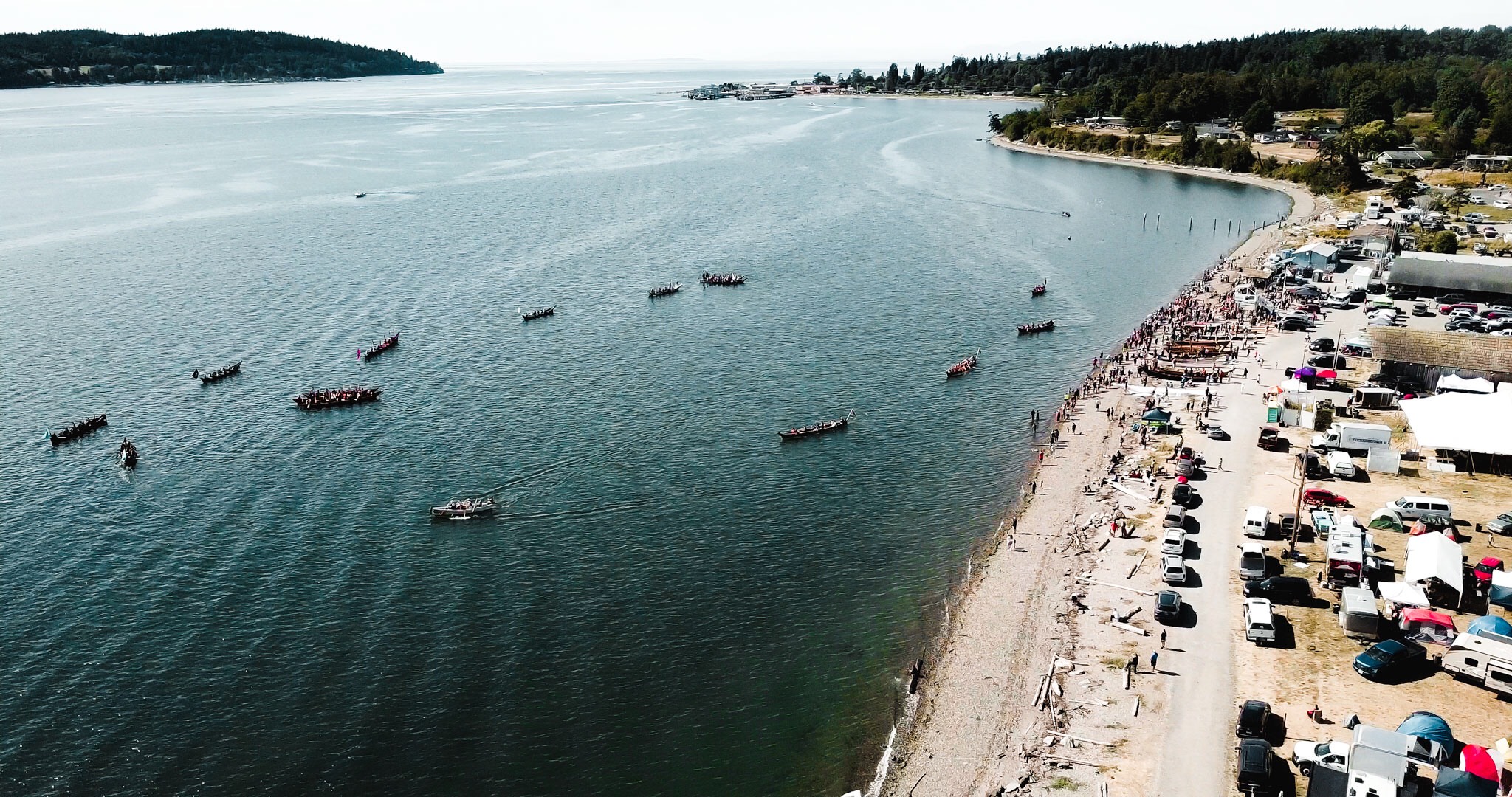 Imagine a young person telling you they have no direction, purpose, or sense of belonging within their own community. It’s something that’s been heard repeatedly and it’s exactly the kind of thing Paddle to Lummi Tribal Canoe Journey was designed to address.

Providing a way to disconnect from modern life and reconnect with cultural traditions is the idea behind tribal canoe journeys, said Paddle to Lummi project coordinator Becky Kinley. It’s also a way to honor tribal communities’ unique relationship with the land, the water and each other.

Each year since 1989, canoe families traveling from up and down the Washington coast, Oregon and lower British Columbia, Canada, meet and gather with guests from around the world. The event is hosted by different native nations each year.

This year’s event is set for the ancestral Lummi Stommish Grounds July 24-28. The event is called “Sqweshenet Tse Schelangen / Honoring Our Way Of Life,” and will bring together more than 100 traditional canoes from various tribes and an estimated 10,000 peoples from up and down the West Coast. On arrival, visiting canoe families ask permission to land, often in their Native languages. Protocol — the sharing of songs, dances, food and gifts — lasts for several days.

Kinley said being introduced to the canoe journey became an opportunity to work hard, learn the discipline of her people, and earn the privilege of participating. She sat down with me earlier in June to talk about what the canoe journey personally means to her.

Tara Nelson: Tell us a little about yourself and how you got involved in the canoe journey.
My name is Rebecca Kinley — I’m the special projects coordinator for the Paddle to Lummi project. I’ve been honored with the privilege of sitting in this role because of my almost 10-plus years working for the Lummi Indian Business Council. Before that I was youth leadership manager for Behavioral Health, where I worked alongside the late Justin Finkbonner to codevelop and cofound the Lummi Youth Canoe Family.

Over the past seven years, we have mentored and were able to take about 180 youth on the canoe journey, which was 100 percent youth-led. It was a philosophy that we were really trying to practice, which is to have youth-led, family guided, and culturally competent decisions for community-led activities. For canoe journey, we’re able to teach youth all the disciplines to participating in events, not just a small component of it. I believe the youth valued the learning and the challenges they have had. Today they are very successful and I am very proud of them.

It was a real eye-opener regarding some of the climate impacts and the disparities that our people are facing — especially with the coal terminal being the biggest. (The youth) were really angry and upset. They said, how are we supposed to care about our future if we don’t even have one? That’s where the international travels came into play and we were able to start doing cultural exchanges around the world.

We ended up attending the UN COP21 /Climate Change Conference in 2015 in France and being the largest youth delegation to influence leaders from all around the world to advocate for world leaders to sign the climate change agreement. And it was right after the terrorist attack, too, so it was scary, but those kids were convincing our leadership that they’re willing to die for their sovereignty cause that was going to be a statement about how we were going to take back control of who are in our cultural life ways. That provided our elders assurance that they were always going to fight for the Lummi people.

What was your first canoe paddle like for you personally?
Rebecca Kinley: My first time on the water was in June of 2013, right before Stommish, and right after losing my best friend. It was really hard because I didn’t want to be on the water, but I was forced to be there because I was the leader and I had to show that it was cool. I really didn’t want to be present and I freaked out because the first time we were in the canoe we weren’t all pulling together and the canoe kinda wobbled and we just ended up pulling into the cove and back.

But it was really the best half of mile I’ve ever pulled because the elders who were on that canoe just sat there and reminded us why we were pulling. They said every single time you’re pulling, you’re praying and what are you praying for, and it really forces you to start looking inside.

Lummi Nation hosted the canoe journey in 2007. How will this year be different?
Rebecca Kinley: They are calling it a mini journey, but really it’s just a smaller time frame. In 2007, we had about 75 canoes, and this year, as of June 1, we have 98 canoe families confirmed. Lummi is very centralized for a lot of the First Nations from Canada and also many tribal communities from down south who want to participate. Some of the canoes that are coming, this will be their first time back on the water since 2007. And, I think they really appreciate the hospitality that Lummi practices — so they’re really excited to come back and find that level of hope, healing and happiness.

The theme for this year is “Sqweshenet Tse Schelangen” or Honoring Our Way Of Life. Can you talk a little bit about what that means?
Rebecca Kinley: We chose that to be our theme because, I could sit there and talk about our shortfalls and the disparities of our people, but why focus on our weaknesses when we have so many strengths. And really, we want to take this time to honor our women and our children, our traditional life ways of gathering and hunting, and promoting prevention. The canoe journey has really become a movement of tribal communities all over the coast of the North American continent. I’ve seen people moved because there are so many outside influences, like social media and modern culture, and just the modern world that’s trying to define who we are. Canoe journey really makes us go back to our original life ways and our practices and our teachings. I think that’s what’s so powerful about it. I think people have a lot to look forward to when they come to Lummi.

So similar to the youth paddle you organized, this is really about helping people connect to their own cultural identity and working out other problems through that?
Rebecca Kinley: Of course, I think when you have that level of connection you are going to start taking care of the things around you — the fish, the trees, our land, and protecting our sacred sea. Water is life isn’t just a Lummi proclamation; it’s a global one.

I understand the canoe journey happens every year and is hosted by other nations. How did it get started?
Rebecca Kinley: It started in 1989 and there was a discussion between tribes and the state of Washington about their water rights, and the state was probably interested in taking away their water rights back then. They said, “You don’t even use your water, what’s the point of protecting it.” So the tribes were like “Oh, fishing is not enough? Gathering off our water is not enough?” So, they started a movement of getting canoes back on the water. A lot of the tribes at least in Washington and Canada do war canoes, which is a fun pulling, but they also do the traveling canoe journeys, so they decided to bring that back so it would be a continual movement. Ever since then, it’s been an annual event hosted by tribes as far south as Oregon and as far north as Alaska.

Can you talk about protocol and what that involves?
Rebecca Kinley: When they get to our land after the canoe landing on July 24, it will be about a six-hour event where we’ll be inviting people ashore, and we’ll have our chief and our language speaker introduce that with our canoe families and give them a warm, traditional welcome. Protocol and the potlatch will start at 9 p.m. and go around the clock. That’s when they’ll be sharing their songs, their dances, their testimonies and the handcrafts they’ve been working on all year.

Anyone can show up and attend. How many people do you expect will attend?
Rebecca Kinley: We have 98 canoe families signed up at the moment and we are still getting messages about more. So, if we get two more canoes, we will have 100 canoes. And each family has about 50-100 people, and that doesn’t even include their delegations that travel up or down from their land to ours. And then we have all the community guests that we’ve invited. So we’re in for a whirl (laughs). This Lummi tribal canoe journey event was organized by the Lhaq’temish Foundation. For more information about “Sqweshenet Tse Schelangen/Honoring Our Way Of Life,” visit: https://paddletolummi.org.
________________________________

Tara Nelson is a freelance writer, designer and communications consultant who lives near Edison with her house rabbit “Lil’ Bitey.” She earned her Bachelor’s degree from WWU in journalism (‘06), and a second degree in visual communications from WCC in 2017. She owns and operates Taradactyl, her graphic design and media communications business.