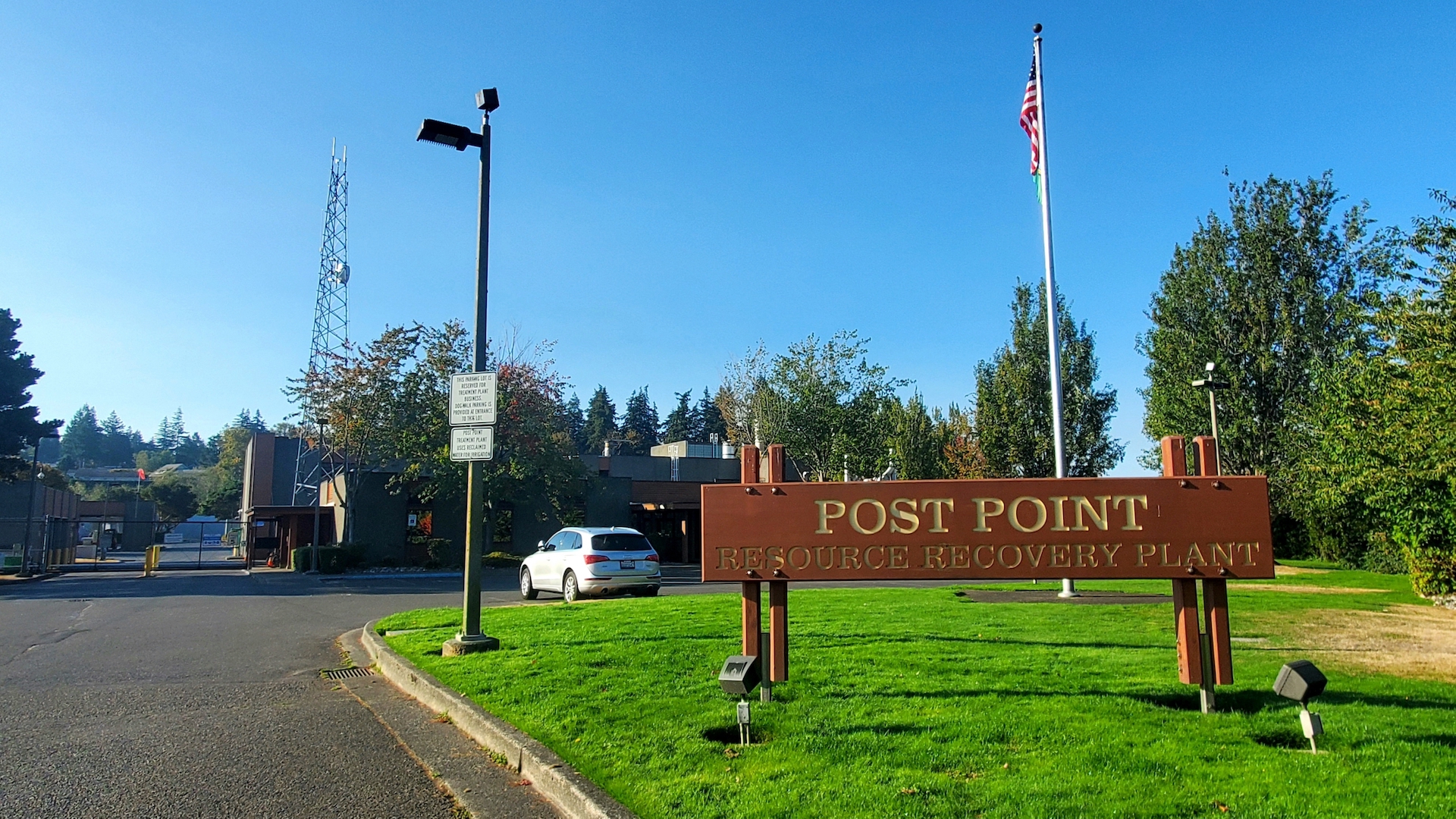 In the fall of 2021, the Post Point Resource Recovery Project team tested a sample of incinerated solids and a sample of treated liquid (which is discharged into Bellingham Bay) to assess emerging contaminants-of -concern levels (12). Post Point’s treated waste had the lowest levels of PFAS out of 14 other plants in Washington. During the meeting on Sept. 26, Fleetwood announced that Post Point received the 2021 Outstanding Performance award from the Department of Ecology.
photo: Luisa Loi

After five years of study, discussion and planning, the Bellingham City Council abandoned its Post Point project in light of new cost projections — more than $1.1 billion to fund the project over the span of 15 years, which would have increased service fees dramatically (1).

The unanimous decision, made on Sept. 26, followed Mayor Seth Fleetwood’s proposal submitted to the council a month earlier (2).

This staggering sum would have covered replacing the old incinerators with thermophilic anaerobic digesters, upgrading the plant’s other old components and removing nutrients from the wastewater that is directly discharged into Bellingham Bay.

During the Sept. 26 meeting, the council approved Councilmember Michael Lilliquist’s motions to approve the mayor’s proposal, amend any related policies — including those within the Climate Action Plan — to reflect the new decision, and look into alternative technologies, such as pyrolysis and gasification.

Financial Relief for Community
Installing the digesters, a process that in 2017 was expected to amount to $220 million, would have now cost $430 million. Fleetwood said the dramatic increase was caused by different challenges related to the pandemic: supply chain disruptions, increased construction costs, new environmental regulations, inflation and skilled labor shortages.

“That is a public capital project cost that is unprecedented in the history of Bellingham,” the mayor wrote in a staff report presented to the council on Sept. 12 (3).

“The responsible approach to estimating and funding a project of this size results in monthly utility costs that are going to be unaffordable to many Bellingham residents and businesses,” Fleetwood wrote. “This threat to affordability is going to be particularly pointed for our most vulnerable community members.”

According to the data, maintaining the incinerators would cost approximately $541 million over 15 years.

Fleetwood said the city will use the sewer fund reserves — estimated to be about $60 million in 2022 — and current sewage utility rates, with more details to be included in the 2023-24 budget proposal (5).

“As much as this was a surprise to me when the mayor wrote a foreword not too long ago, I’m prepared to follow his lead,” Lilliquist said during the Sept. 26 meeting. “I was growing increasingly uncomfortable, not just over the last few months, but over the last few years with the estimated costs.”

Lilliquist, chair of the council’s Public Works and Natural Resources Committee, has also expressed concerns about the project’s environmental impacts in past council meetings.

Environmental Concerns
PFAS, or per- and polyfluoroalkyl substances, are a group of chemicals found in a wide variety of artificial products. According to the Centers for Disease Control and Prevention, PFAS don’t break down in the environment. Instead, they accumulate in organisms through exposure. Studies suggest these compounds can have negative impacts on human health by affecting development and the immune system, for example (6).

According to Public Works Director Eric Johnston, it’s unknown if the current incinerators can break down all of the 9,500 known PFAS compounds. However, many studies indicate that digesters are incapable of eliminating all of them from human waste.

While the Washington Department of Ecology and the U.S. Environmental Protection Agency regulate biosolids for land use, many scientists and activists argue this technology can do more harm than good. Some concerned community members, like Rick Eggerth and Kirsten McDade, said they were happy to hear about the mayor’s proposal to stop the project.

Eggerth is a member of The Citizens Group, a group of people who have met with the administration several times to oppose spreading biosolids on the soil.

Following the mayor’s proposal, he spoke with Whatcom Watch. “The mayor’s proposal suggests that we continue with the old incinerators and refurbish them and fix them up,” he said. “Which sounds good, but that’s exactly what we’ve been told for two-plus years by the public works department couldn’t be done.”

McDade is a scientist with 30 years of experience in pollution. She works for RE Sources, a Bellingham-based environmental nonprofit.

“We’re really excited about the idea that we can have some more time to think about the best solutions to replacing these incinerators,” she said.

Over the past years, RE Sources has discussed their concerns about the project with the city, explaining that digesters are no better than incinerators.

High Levels of Nitrogen
While incinerators release greenhouse gasses into the atmosphere, anaerobic digesters produce high levels of nitrogen. Once this nutrient reaches a body of water, it causes excessive algal growth. As the algae die and decompose, they take oxygen from their environment and release high quantities of CO2, killing the surrounding marine life, according to the Washington Department of Ecology (8).

Human waste is far from being natural. According to McDade, these biosolids contain contaminants that an anaerobic digester would fail to break down. These contaminants include pharmaceuticals, detergents, flame retardants, microplastics and, as previously mentioned, PFAS.

Without a Clean Soil Act in place, anaerobic digestion would harm the health of our soil and the Salish Sea, McDade said.

“[While] we are filtering all that water, those contaminants are being left behind in the solids,” McDade said. “Why would we want to put them back into our environment where they can just wash right back out to the Salish Sea?”

Since 2022, the Washington Department of Ecology has been requiring wastewater treatment plants to reduce the amount of nutrients discharged into Puget Sound (9). Since the byproduct of biodigestion is a cocktail of contaminants, compliance would entail significant investments.

“Anaerobic digestion would cost the city more because it increases the amount of nitrogen,” McDade said. “The more nitrogen you have in the wastewater, the more expensive it is to remove it.”

The Post Point Resource Recovery Project, according to a memo submitted in 2021 by Johnston of public works, would have helped the community reduce emissions from sewage incineration by 60 to 80 percent. That would be the same as removing the emissions of about 1,450 cars every year. It was also expected to produce the equivalent of 45,000 50-pound bags of commercial fertilizer per year (10).

On the other hand, it would have also represented an unprecedented effort to address a relatively small issue, according to Fleetwood.

“Less than 1 percent of total community emissions are from incinerators at Post Point,” Fleetwood wrote in the staff report. “When compared to the whole community, the reduction in carbon emissions with [the] Resource Recovery Project is very small but very expensive.”

Next Steps
According to Johnston, the city is using a preventive maintenance model to “replace things before they fail” — which he said is how the city runs most of its utility systems — with future restoration efforts estimated to occur after 15 or 20 years. At the same time, the components that are more challenging to maintain will be replaced (11).

The city expects to start the process of planning for future facility capacity, which could take two years according to Johnston.

In response to public concerns surrounding the decision, Fleetwood said the city will look into other options, like pyrolysis and gasification, while maintaining the current incinerators.

According to Lilliquist, the city council received many emails from the community stating that thermal technologies like gasification and pyrolysis are a better solution to incineration. However, he said, they need to be thoroughly investigated first.

Johnston said city staff is working on the following actions, which will be reflected in the mayor’s budget proposal:

• Conducting an engineering study to determine which types of maintenance activities need to be done over the next several years. Replacing the storage tank is a priority.

• Conducting an engineering study to understand which project comes in the priority list. “We’ll be working on that very, very soon,” he said.

• Replacing the systems that control the entire solids’ system.

• Contracts to do that work on the liquids’ control system are already in place, Johnston said.

• Hiring a consultant to decide future steps pertaining to emission controls, which will be done in 2023.

• Conducting more studies and engineering consulting on nutrient removal. “However, with the digesters being changed to the incineration, that impact will be lower and we’ll have more flexibility and time,” Johnston said.

Luisa Loi is a reporter based in Bellingham, with an interest in covering local environ- mental issues. You can learn more about Luisa through her LinkedIn (Luisa Loi) account, or by contacting her at luisaloi@live.com.