The impacts of Whatcom County refineries stretch beyond local waters …

Western Whatcom County is nuzzled by the Salish Sea at the broad intersection of the Strait of Georgia and Strait of Juan de Fuca. It is centrally located in the Salish Sea watershed, and is home to two of Washington state’s major refineries: the Phillips 66 refinery and the BP Cherry Point Refineries, (1) which is the largest in the state. (14) Although southern resident orcas don’t visit Whatcom County’s waters often, the refineries still affect the orca population.

Meet the Whales
Southern resident orcas are a genetically distinct ecotype of killer whale that live in the waters stretching from northern Vancouver, B.C., all the way down to central California. (2) They get their name from residing in the inland waters of southern Vancouver Island and Washington. (6) They differ from other populations of orca in their size, diet, vocalizations, social structure, and, most prominently, their numbers.

The southern residents were listed as an endangered species in the United States in 2005, and in Canada in 2001. (3) As of June 2021, there were only 75 southern residents (20) across three pods, named J, K, and L pods. For comparison, the northern resident orcas, which are the southern residents’ neighbors residing primarily in Canada, contain more than 200 individuals. (5) Bigg’s orcas, also known as transient orcas who eat mammals such as seals, had a population of 349 in 2018 and have continued to grow since then. (7)

The reason the southern resident orcas have done so poorly can be narrowed down to three elements: lack of food, toxins, and vessel disturbance.

Threat One: Lack of Food
Southern resident orcas eat almost exclusively Chinook salmon and depend on the rivers that flow into the Salish Sea to deliver their food. Their population is closely correlated with the number of salmon that return to these rivers. (9) Salmon populations have slipped dangerously low due to destroyed and disappearing habitat, warming waters, contamination, and poor management of fisheries. (8)

Threat Two: Toxins
All orca populations and almost all marine life are affected by contaminants in marine waters. These toxins include pesticides such as PCBs and DDT (8) along with other pollutants like flame retardants (9) that seep into the tissue of marine mammals and are carried through the food chain by bioaccumulation and biomagnification. 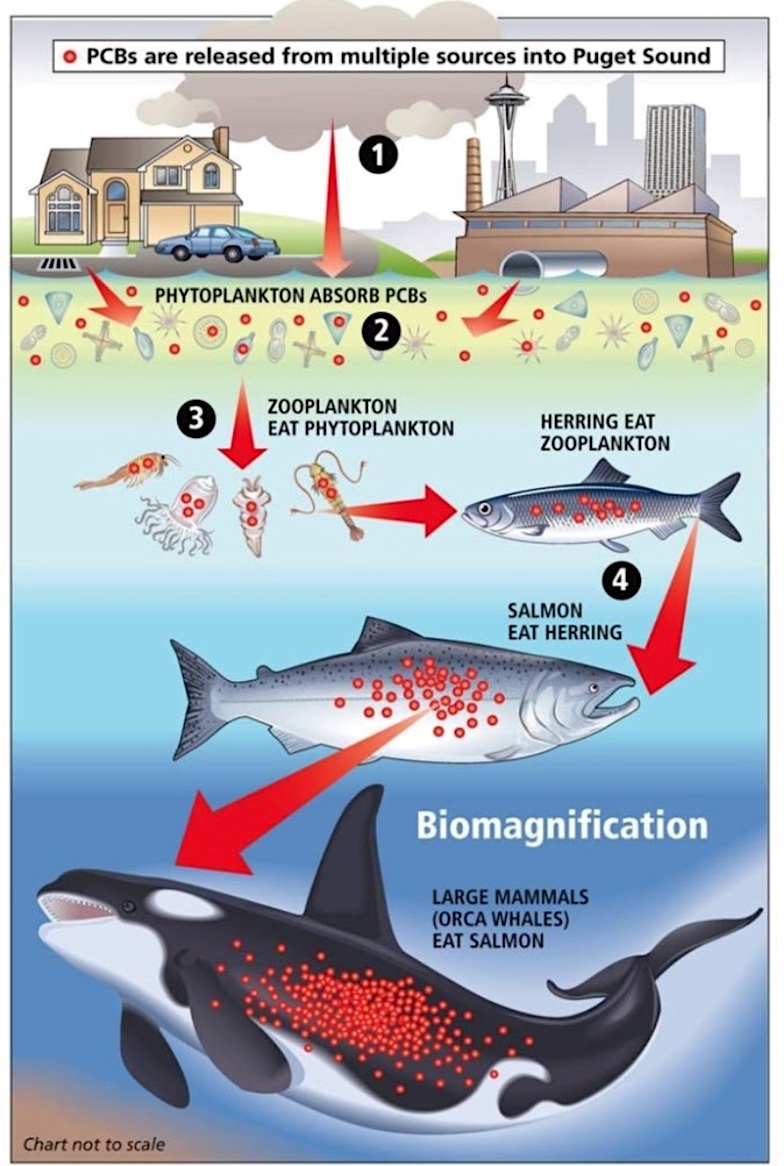 In whales, the toxins simply stored in blubber don’t have much effect. (9) However, since the southern residents are often starving, their bodies use fat reserves in the blubber to create energy, which releases those stored toxins into their system. This can lead to pregnancy failure and poor immune systems. (9)

Threat Three: Vessel Disturbance
Oil and vessel traffic have been a growing economic source for the Salish Sea region. An increase in refineries has led to an increase in barge and tanker traffic, causing the Salish Sea to be a high-traffic body of water with 10,000 large cargo vessels traversing the waters annually. (11) There are multiple impacts that continue to be detrimental to the southern resident population including oil spills, ship strikes, inability to communicate, emissions, and hunting ability. (12) Unless urgent action is taken, these situations will only become more frequent. 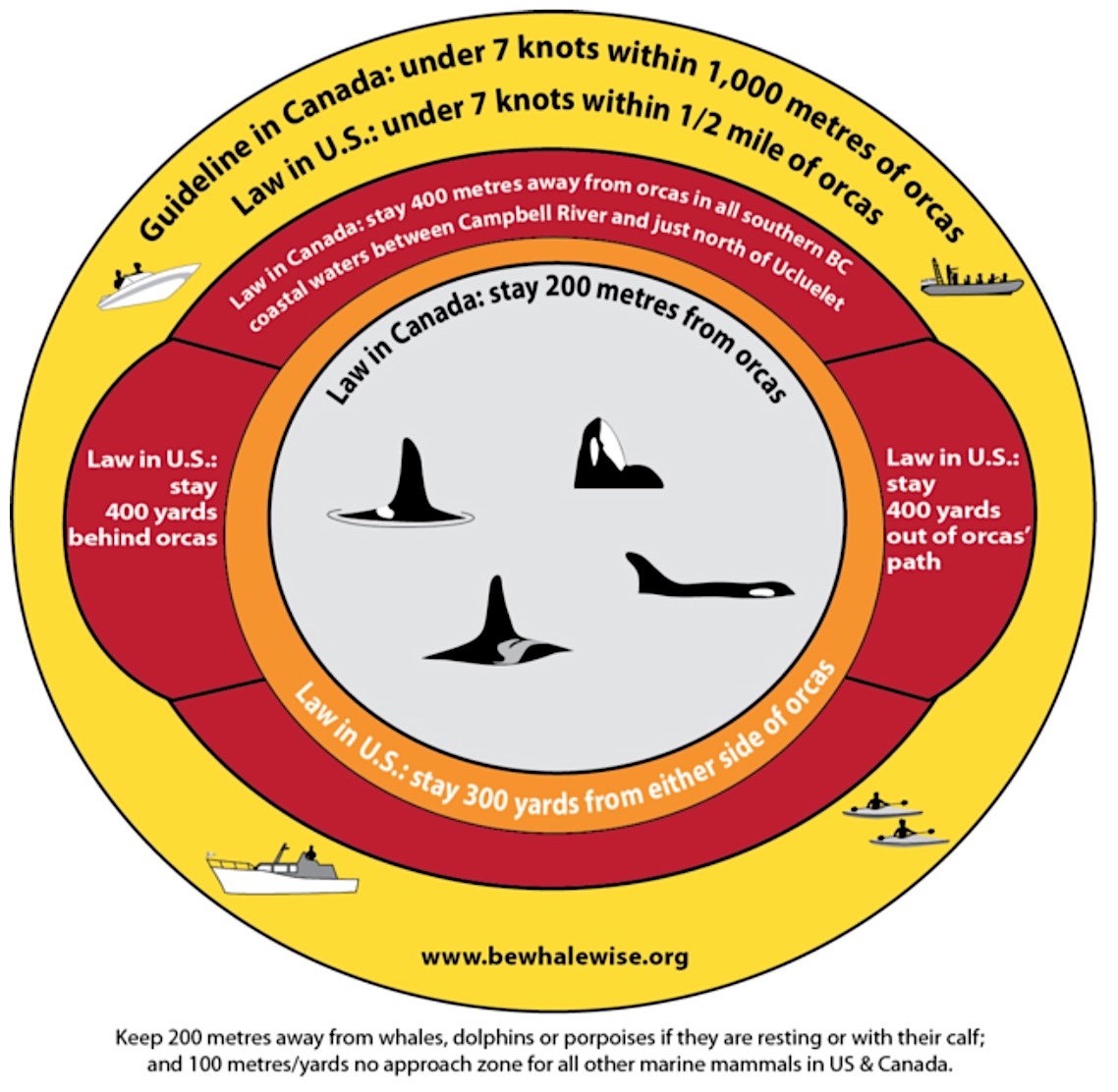 An oil spill could decimate the southern resident population, according to Amanda Colbert, the education and events assistant with Orca Network. (20) Colbert compared the situation to the Chugach Bigg’s orcas in Prince William Sound. These orcas were in Bligh Reef in 1989 when a tanker spilled 10.8 million gallons of crude oil into the water.

“Members of the Chugach population died shortly after this event, and its population’s remaining members never successfully produced a calf following this disaster,” Colbert said. “Today, there are seven left, meaning this population is already functionally extinct, with no way to continue on the population. Our fear is that with one catastrophic event, we could be looking at the same scenario for the southern resident orcas.”

Noise, especially man-made noise such as vessel noise, is amplified and travels farther underwater, which can disrupt orcas’ echolocation ability. They need more energy to communicate louder, which they may not have because they don’t have the food they need to be in good health. Vessel noise can also lead orcas to abandon a hunt. (13)

According to San Juan Islanders for Safe Shipping, four out of five refineries in Washington state are located in southern resident habitat. Two of these refineries are located in Whatcom County. (12) Getting resources that are landlocked in Western Washington to foreign countries involves going through the Salish Sea, which is critical habitat for the southern residents. (13) According to Georgia Strait Alliance, initial research showed that vessel traffic causes a 23 percent decrease in southern residents’ ability to hunt, and two-thirds of that decrease is caused by commercial ships. Whale watching and recreational vessels account for the remaining third. (13)

What Is Being Done Locally?
On August 29, 2019, Friends of the San Juan Islands appealed Whatcom County’s approval of an external floating bank that would hold 300,000 barrels of oil for Ferndale’s Phillips 66 refinery. This is equivalent to 12,600,000 gallons of oil. The approval also allowed permits for an 80,000-barrel external floating bank at the same location. (15) Friends of the San Juan Islands said in their appeal that the project fails to take the health of the southern residents into consideration for multiple reasons, including the high risk of a large oil spill .(15)

On June 2, 2020, the Whatcom County Council voted 4-3 to maintain a moratorium on permits that would increase through-shipments of unrefined fossil fuels at Cherry Point. This ensured existing terminals won’t reconfigure to ship more crude oil, tar sands, and fracked gas. (14)

How Can You Help?
“The ocean is dying the death of a thousand cuts …” said Brian Skerry, a National Geographic wildlife photographer and documentary producer. “For the very first time, we humans understand many of these environmental problems, we understand the solutions, and we know what we need to do to fix them. The real question is, will we simply bear witness to the destruction that’s happening around us, or will we move in that direction? Will we have that collective will to move forward?” (16)

Things You Can Do:
• The community and the government must work hand-in-hand for progress to be made for the southern residents. Contact your elected officials by phone or mail and ask them to oppose bills and changes to documents that provide protection for marine populations, such as the Endangered Species Act or Marine Mammal Protection Act.

• Writing letters and signing petitions for action groups, both local, statewide, and nationwide, can have a large impact on the many facets of southern resident conservation.

• Be Whale Wise: the United States and Canada have differing laws on distance and speed around orcas in the water. (19)

• Get involved in local projects such as restoring salmon habitat and beach cleanups to contribute to a healthier watershed.

Skerry said in an interview that good science combined with good visuals will resonate with viewers. (16)

“Photography and videography are extremely empowering and powerful to the equation of getting people to care,” Skerry said. “It’s because we are visual, and they can invoke emotions and a visceral response.” (16)

Bart Rulon, a professional wildlife photographer, has been photographing the southern residents since 2000. (17) Since then, the sight of southern residents while out on the water has diminished greatly due to declining numbers. He emphasized it is a group effort to help save their population.

“I think it’s a combination of government work and advocacy from the public because it all starts with educating one person at a time, helping them understand that we need improvements,” Rulon said.

The orcas are both culturally and spiritually important to the Coast Salish people and other indigenous tribes of the Salish Sea. The southern resident orcas are a keystone species of the Salish Sea, meaning that, if they were to go extinct, it would affect the entire ecosystem. (13) As an indicator species, the orcas’ health reflects the overall health of the watershed — meaning, if their health is in decline, the health of the watershed’s entire ecosystem is soon to be in decline, if not already.

13. RE Sources – The epicenter of Salish Sea protection: https://www.resources.org/2020/06/the-epicenter-of-salish-sea-protection/