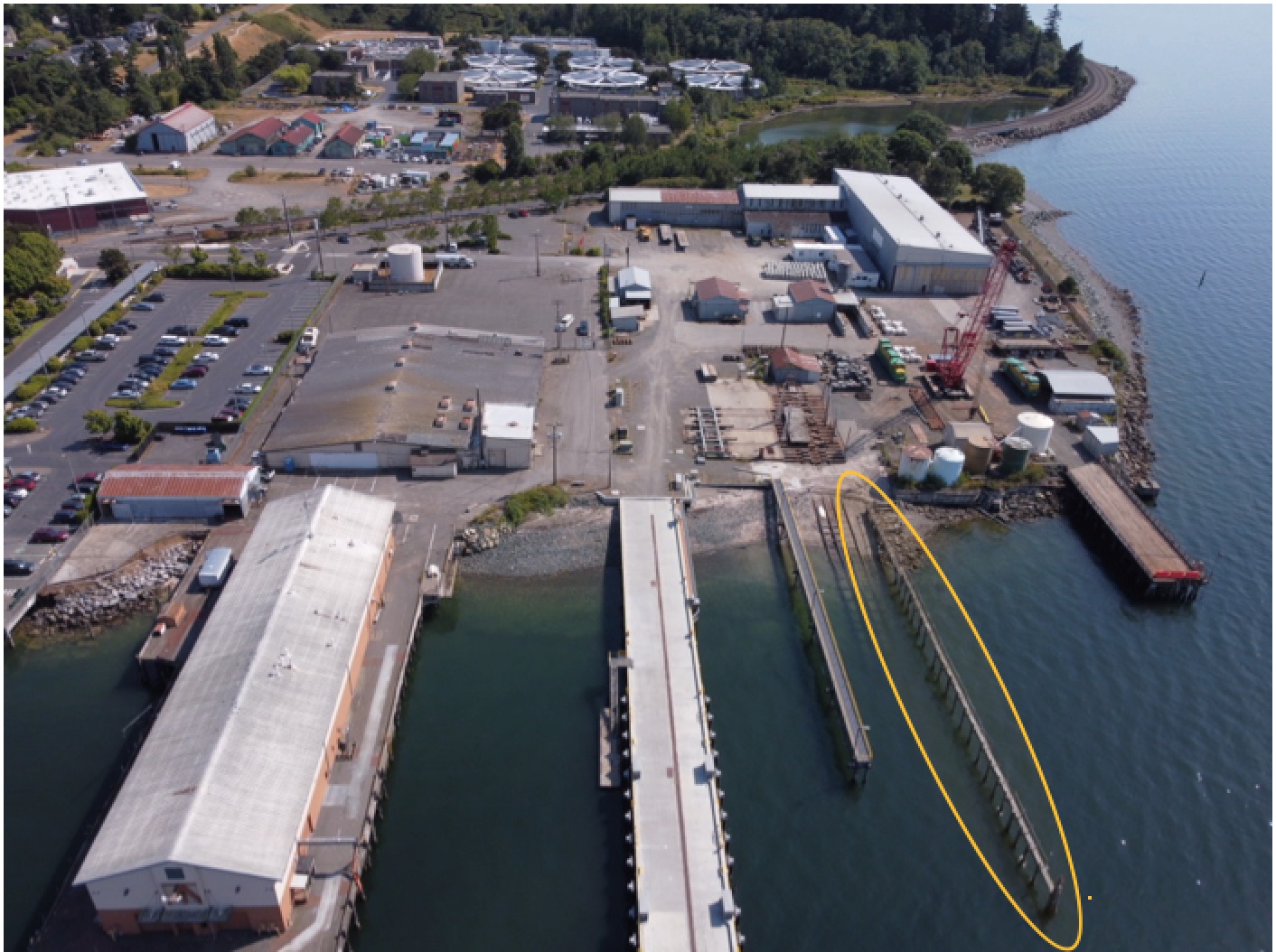 Aerial view of the shipyard facing south. Brian Gouran said about 18,000 cubic yards of contaminated sediment will be removed in the cleanup. The West Marine Walkway (circled) will be removed to allow for dredging. Photo: John Guenther

The Port of Bellingham and the Washington state Department of Ecology are working together to clean up the Harris Avenue Shipyard, located at the foot of Harris Avenue in Fairhaven. The shipyard is one of 12 cleanup sites that are part of the Bellingham Bay Demonstration Pilot, a partnership of different agencies — including the port and Ecology — with the goal to clean historical pollution, restore habitats and “stop ongoing sources of pollution” in Bellingham Bay. (1) In 2000, Ecology declared the Harris Avenue shipyard as a site of high priority.

Ecology found Univar Solutions USA Inc., successor of Pacific American Fisheries Inc., liable for the cleanup, along with the Port of Bellingham. In 1915, Pacific American Fisheries turned it into a shipyard, which was purchased by the port in 1966 and leased to different companies throughout the years. It’s currently owned by the port and the state of Washington. (2)

In total, cleaning up the Harris Avenue site will cost about $30.82 million. (3) According to a release and settlement agreement signed by the port and Univar, Univar had to pay the port $12,013,472. The state will reimburse the port for about 50 percent of the total cost through Ecology’s Remedial Action Grant program. The cleanup will cost the port approximately $3 million (after using the Univar money and being reimbursed by the state). (4)

In May, the port announced a new tenant for the site, Jeff Hamiltoni, who will occupy the property as Fairhaven Industrial Marine Repair Facility. According to the 10-year lease (which includes a 5-year renewal option), Hamilton is the tenant of 16.2 acres of property, including 12.5 acres of Department of Natural Resources property managed by the port and 3.7 acres owned by the port. (5)

The site — which has been vacant since Puglia Engineering left in 2019 — will be used for a variety of purposes, such as manufacturing and repairing boats, processing fish, and mooring. There will be a heavy civil construction and manufacturing center, a marine terminal for barges — with some limitations to barge and freight activities to avoid competition with the Bellingham Shipping Terminal— administrative offices, a fabrication and machine shop, a boatyard and a shipyard. (6)

Hamilton, who also owns businesses like Hamilton Construction, Hamilton Manufacturing, and Skagway Commercial Company, said he will not be responsible for the cleanup costs.

Historical Pollution
Historical pollution has led to the presence of contaminants, many of which have carcinogenic potential, said Pollution Prevention Specialist Kirsten McDade. McDade works with RE Sources — a Bellingham-based environmental nonprofit involved with the cleanup.

“The remedial investigation and feasibility study — studies carried out by consultants overseen by the Department of Ecology — have shown that there are levels of arsenic, copper, zinc, and petroleum hydrocarbons in the soil and groundwater that are above health standards set by the state,” she said. “And then the sediment has arsenic, copper, zinc, cadmium, polychlorinated biphenyls and semi-volatile organic compounds. Those are also above our standards.” McDade however specified that not all polycyclic aromatic carbons — which are also present in sediments — and petroleum hydrocarbons are carcinogenic.

According to McDade, copper and zinc are essential nutrients to humans; however, they can be harmful if their levels are excessive.

Marine organisms are far more sensitive to copper and zinc, she said, particularly coho salmon. Other species that are native to the area include clams, eelgrass beds, snails, herring and candle fish. (7)

McDade said that one of the reasons why there are high levels of copper and zinc is because they are used to make antifouling paint, usually a blue paint used to prevent aquatic organisms from attaching on the bottom of boats and ships. (8) Among other sources of contamination, there’s sandblasting, fuel spills from aboveground storage tanks, and operations on the marine railway area (where the most contamination occurred). (9)

McDade said that direct exposure to the contaminants can cause skin rashes, eye irritation, lung damage, nausea and vomiting. “Generally, the levels aren’t so big that those are the types of effects we see,” she said. “I am concerned about chronic conditions caused by small amounts of exposure to toxic chemicals over time, such as cancer or autoimmune disorders, and, because it happens over time, it’s really hard to trace. There [are] so many toxic compounds in our environment that are known to be carcinogenic, but how do we know it was that one at this time versus another chemical at another time that somebody was exposed to?”

Most Contamination Is in the Sediment
Brian Gouran, director of Environmental Programs at the Port of Bellingham, said that being an industrial area makes the site less dangerous to humans. In fact, he said, exposure for people is very limited because the majority of the contamination is in the sediment.

Between 2017 and 2018, the port cleaned part of the site, overseen by Ecology. The operation consisted of removing wood structures, including those covered in creosote — an oil used to preserve wood — and replaced those with concrete and steel piers, dredged and disposed of contaminated sediment, excavated and re-filled with clean sediment, and placed a cap where it was not possible to remove all the contaminated soil and sediment. (10) The interim action cost $14.12 million. (11) Gouran said that about a third of the site has already been cleaned up in the interim action. 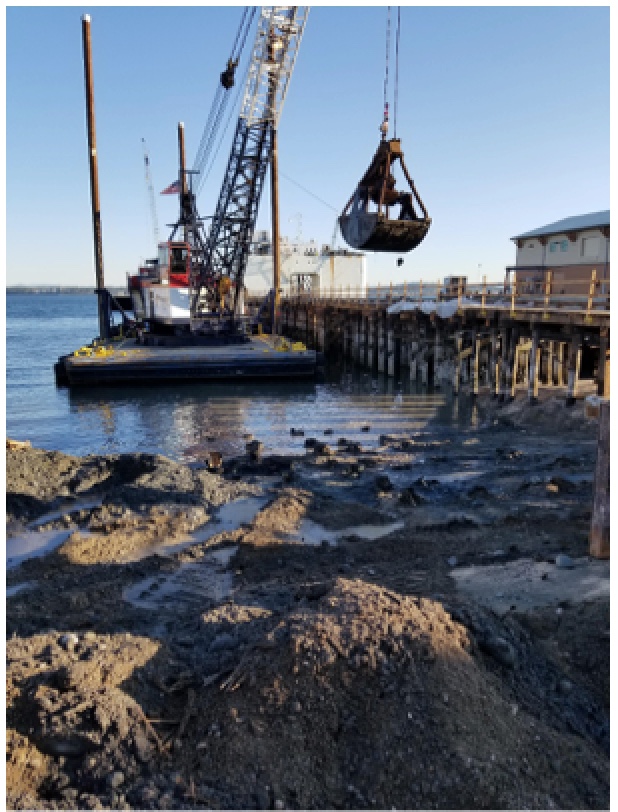 A machine dredging the contaminated sediment during the interim action in 2018.
Photo: John Guenther

The remaining cleanup work, which is estimated to cost $16.7 million (12) and to begin between 2023 and 2024, (13) will consist of dredging contaminated soils — 2 to 4 feet below the mudline — where accessible. The open intertidal areas will be excavated about 3 feet and refilled. The extracted materials will be taken to a landfill or get recycled. (14)

“Approximately 18,000 cubic yards of contaminated sediment will be removed and disposed of offsite — that’s about 180 dump trucks’ worth of material,” Gouran said. 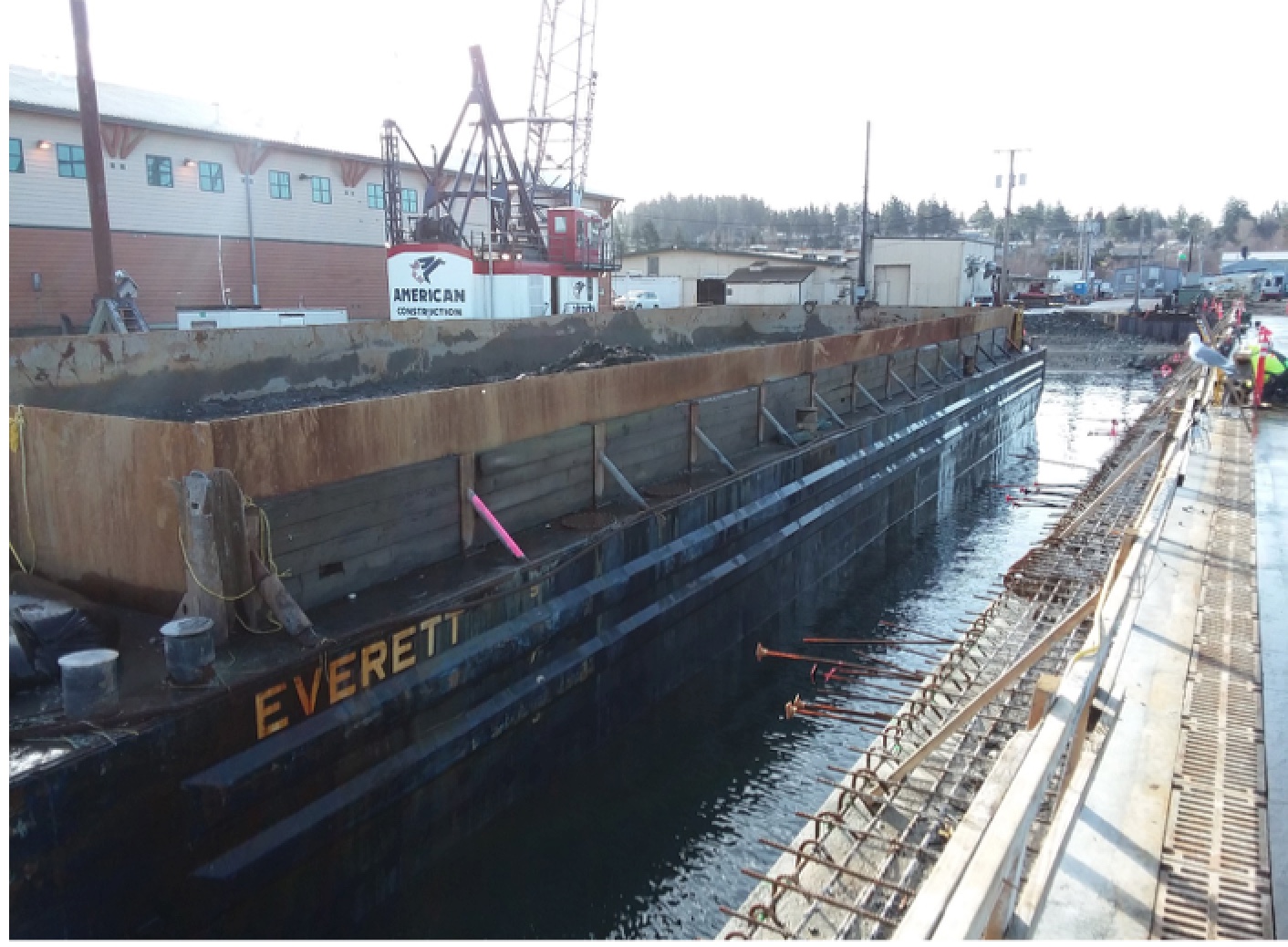 In order to facilitate dredging, the West Marine Walkway will be demolished. The Harris Avenue Pier, the west dock and the marine railway will remain. Beneath them, a 1-3 feet layer of granular capping material will contain the remaining contaminated sediment where full removal is not possible.

According to McDade, in some areas it won’t be feasible to fully remove the contaminated sediment because it would stir up the floor and increase exposure to contaminants.

The caps will remain in perpetuity, requiring maintenance and monitoring. “The cap will prevent people from coming into direct contact with the contaminated soil below the cap by getting it into their shoes, or hands and take it home,” Gouran said. The caps can be either made of asphalt, gravel or soil, he added.

They may install a “stormwater conveyance system to reduce infiltration of stormwater and reduce leaching of metals into groundwater sitewide.” (15)

Guenther said Anchor QEA is preparing a pre-remedial plan that Ecology will review later this summer. The cleanup plan has not seen changes, however, Gouran said, “depending on what comes from the investigation and more detailed design, there may be some changes, but none anticipated at this time.” 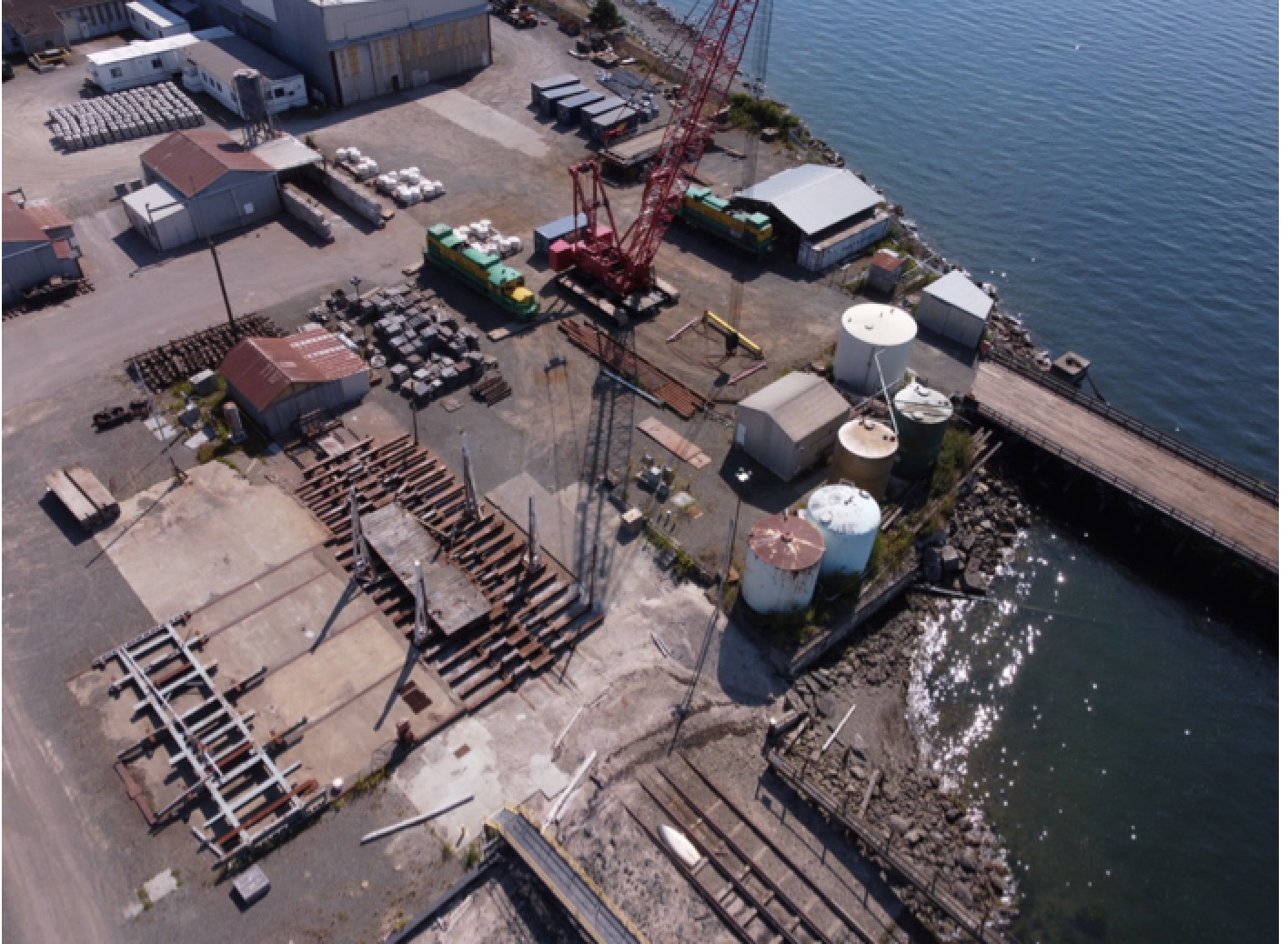 The remaining two thirds of the site to be cleaned up starting in 2023 or 2024.
Photo: John Guenther

The next step is to obtain permits for in-water work, including dredging, shoreline excavation and armoring. Guenther said that the Model Toxics Control Act  requires cleanup projects to satisfy less permit requirements than other projects.

According to Gouran and Guenther, they are waiting for a permit from the U.S. Army Corps of Engineers, known as Nationwide 38, which would require monitoring water quality as dredging occurs, and working in specific periods of the year to minimize impact on juvenile salmon. “Depending on the project, there may be other conditions that the USACOE (U.S. Army Corps of Engineers) will require, but it is too early to know what those might be for this project,” Gouran said.

3. https://www.portofbellingham.com/DocumentCenter/View/9836/2 under “agreement,” section 1 (“settlement amount and payment”) and section 2 (“Port Will Conduct All Reauired Remedial Actions Without Additional Cost to Upjvar”)

Luisa Loi is a freelance reporter and journalism student at Western Washington University whose work focuses on the environment. You can find more about Luisa and her work at luisaloi.journoportfolio.com, or email her at luisaloi@live.com.