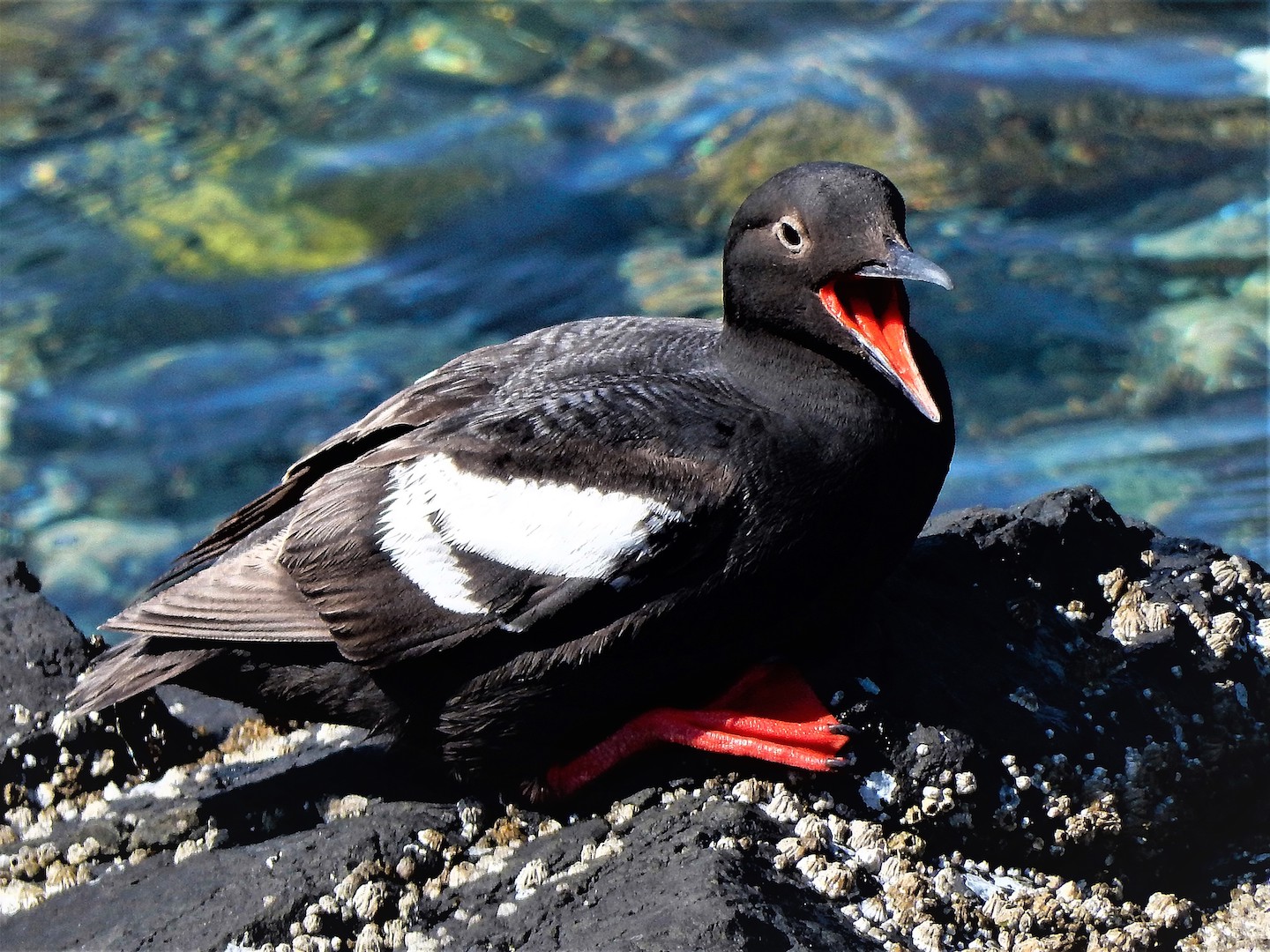 Before we get too far along, I should say that summer is my least favorite season and the Fourth of July/Independence Day is my least favorite holiday. If I felt that everyone was thinking about the significance of the holiday rather than using it as an excuse to make unnecessary noise, I might reconsider. In the past, we’ve retreated across the border to get away from the chaotic scene that usually plays out, despite ongoing fireworks bans. I can block it out in any number of ways, but I really empathize with domestic pets and wildlife that have to endure.

This year, as with last, Covid-19 kept the border closed so I tried to find a place that would be quieter and maybe even a bit cooler. We settled for a place that had potential to offer everything we needed, like fewer people, sunshine with cooler temps, and even a few good birds. That place turned out to be Keystone, the Whidbey Island terminus for the Coupeville-Port Townsend ferry. This extension of the Fort Casey State Park was perfect. Aside from the spectacular views across Admiralty Inlet and the Strait of Juan de Fuca, this destination has a lot to offer for a day or even for extended stays.

If you’re a fan, Fort Casey is an interesting piece of Washington state history. The U.S. government purchased 10 acres of land at the site in 1858 to build the Admiralty Head Lighthouse. Near the turn of the century and with the growing interest in modernizing coastal fortifications, the army took over the site and construction began in 1897. The original lighthouse was moved to its current location to make way for a coast artillery battery. Fort Casey, along with Fort Flagler and Fort Worden, became the Triangle of Fire to protect the entrance to Puget Sound.

The armament at these forts consisted of large guns mounted on disappearing carriages, so the guns would be exposed only for the time it took to fire, and then retracted to reload. As impressive as this weaponry was at the time, the guns and the forts became obsolete before construction was completed. The invention of the airplane and the increased use of military aircraft made the forts vulnerable to attacks from above. In addition, the development of battleships with accurate weaponry changed military strategies to embrace the more mobile systems of the 20th century.

Most of the guns at Fort Casey were removed for use elsewhere during World War I and returned or scrapped during World War II, as they were superseded by larger, more accurate weapons. A walking tour through the park is a walk into the history of this part of Washington state and the world at the time. Gun emplacements and two of the 10-inch guns are currently positioned for viewing along with old ammunition bunkers, while old parade grounds, quarters for officers and enlisted personnel make for an entertaining stroll on a sunny day. Views across the expanse of Admiralty Inlet offer a look into the concept of the three forts protecting the straits. Having taken the history tour before, our focus was on our quiet getaway with food and drink and maybe a few good birds.

When it comes to birds and whenever I’m on Whidbey Island, my thoughts automatically go to the inimitable pigeon guillemot. Since Keystone is a reliable place to spend up-close and personal time with these birds, they figured in to the choice of our destination for the day. Guillemots are members of the family of birds known as Alcids. These are oceanic birds that come to land only to nest, and include auklets and puffins. While the majority of this family is less common and harder to find, pigeon guillemots are quite common in northern Puget Sound. They dig burrows to nest in the sandy bluffs that are especially prominent on Whidbey Island. 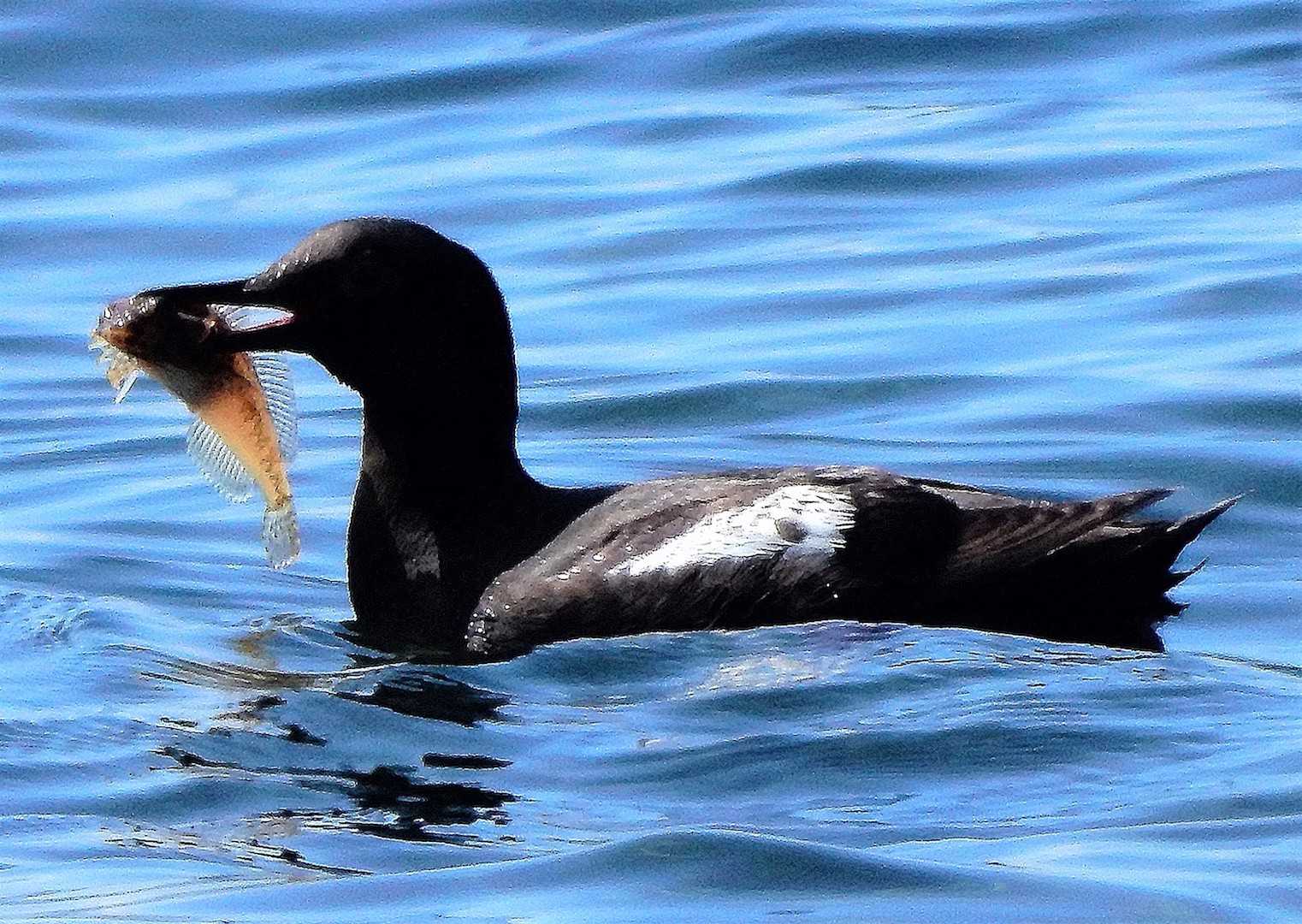 They are also one of the most entertaining birds to observe and the Keystone ferry landing is one of the best places to spend time with them. During the day, they frequent the breakwater jetty that extends from the boat launch area 100 yards out to protect the ferry as it comes and goes on its regular run to Port Townsend. With a little patience, you can sit on the rocks to observe the guillemots in close proximity as they fish just off the breakwater. When they’re on the rocks communing, you’ll have a good look at their bright orange feet that perfectly match the inner lining of their mouths. It’s one of the bird world’s intriguing features. You’ll be enchanted by their high-pitched vocalizations as well.

On this particular day, we left the guillemots behind and hiked up to Admiralty Head to enjoy the views across the inlet and into the Strait of Juan de Fuca. Even on the Fourth of July, the chill wind made for a short stint on the higher ground. On the way down, we noticed large white birds on the edge of Crockett Lake, just across the main road from the ferry landing. Closer looks revealed that we were seeing a foraging flock of American white pelicans. This was more than likely the same flock that had been frequenting Deer Lagoon, farther down the island. Watching a white pelican feeding frenzy is a delightful experience … the kind that turns regular folks into birdwatchers. It was another addition to a spectacular day away from home.

Though this particular location gets quiet in the winter months, it’s one of the best places to see winter raptors such as short-eared owls, northern harriers, red-tailed hawks, and bald eagles. Crockett Lake hosts large flocks of waterfowl and shorebirds throughout the colder months. You can walk the entire spit parallel to the road for over a mile, sampling raptors and saltwater species simultaneously. If you have the time, an easy hike up Admiralty Head to the historic lighthouse will open a wonderful woodland habitat for forest species like woodpeckers and an opportunity to visit with great horned owls that nest there.

Even though our focus on this trip was to find a quieter place for a noisy holiday, Keystone is a place that I recommend for all seasons. It’s always going to be quieter and generally cooler in the summer months. The birds of winter will always be enough to keep you warm as you try to keep up with the variety of diurnal raptors. Along the way, to and from Keystone, there are several birding hot spots to check, and they’re all accessible to everyone. From March Point and Fidalgo Bay to West Beach at Deception Pass, the drive alone is worth the price of admission. Actually, the price of admission is the Discover Pass that helps to fund the places you visit. It’s an annual pass that pays for itself in the long run and the best bang for your buck in these crazy times.