Springtime turns a mycologist’s attention to morels, one of the most desirable of edible fungi. If you want lots of morels, go east of the mountains (see below). Our choices in the western part of the county are limited and more sparsely distributed. First a bit on the biology of these fungi.

Morels are members of the Phylum Ascomycota, the large phylum of higher fungi that produce spores inside tiny cells called asci. This in contrast to the Phylum Basidiomycota which contains the gilled mushrooms and other relatives. However, I use the term mushroom for all large fungi, including morels. Although both these groups produce large “fruiting bodies” from invisible mycelia (networks of microscopic tubes — see Whatcom Watch, October 2019), around here most Basidiomycota “fruit” in the fall and most Ascomycota fruit in the spring.

The ecological roles of the morels are not fully worked out and they are likely more complex than for many other fungi and may very well vary between different species of morels. Some seem to function as decomposers, but may also at times form complexes (mycorrhizae) with plant roots. This topic of mycorrhizae is a big one and one I’ll get into in another article sometime. Suffice it to say here that the plants provide the mushroom mycelium with carbohydrates in exchange for the mycelium providing the plant with, essentially, an extended root system by which minerals and water can more efficiently be obtained.

Discussions of the biology of morels in scientific journals are just about as confusing as what I have just written, so don’t be disheartened. The time will come when biologists uncover the true nature of these fungi and it is bound to be interesting. The caps of morels contain sunken pits in which the spore-producing cells are arranged. There is a spongy network of ridges surrounding these pits that do not produce spores.

The caps are attached to the stem directly at their bases, although one species from the east side of the mountains has the cap attached halfway up to the stem. The insides of cap and stem are hollow. Morels are most commonly confused with early morels (see below) and with members of the genus, Gyromitra, commonly known as brain mushrooms. Gyromitra usually have brown caps which are more smoothly folded than ridged and the entire surface of the cap is fertile with spores. Many Gyromitra are quite poisonous, even when cooked.

In many cases, morels seem to show themselves where there is an influx of nutrients during a relatively short time and an increase in temperature. These factors induce the mycelium, or storage parts formed by the mycelium, to rapidly fruit and form the morels we see. Habitats commonly regarded as good for morels include river valley bottoms, burned forest areas, open east-side forests with melting snow, landscaped areas and orchards.

Despite the fact that the mycelium may sometimes be a decomposer (which are more easy to artificially propagate), it has been very difficult to cultivate morels for on-demand production. A method for cultivation has been worked out, but it doesn’t reliably scale well (like the methods used for button mushrooms and shiitake), and it has been developed for a southwestern morel species that isn’t particularly tasty.

So, the morels you see for sale in stores are wild-harvested. Hence, they are expensive. But they have a uniquely crisp texture and a distinctive, nutty-earthy taste that makes them extremely desirable wild foods. And, since they are hollow, they lend themselves to interesting stuffed preparations. All gourmet cooks show their prowess with the dishes they can assemble with morels. A considerable quantity of wild morels are harvested annually from areas east of the mountains in Washington state making them an important economic resource.

A note of caution in regards to eating: All morels are quite poisonous if eaten raw. They should be thoroughly cooked and cooked in an open, ventilated kitchen in order to eliminate the volatile toxin. Even dried morels, once they are rehydrated need to be cooked.

The scientific naming of our species, like for a great many wild organisms in the United States, is in great flux. For many years, European names have been used for our morels and those are the ones you will likely see in older books. In the last decade, considerable work has uncovered the true nature of many (but not all) of our morels and we now have new scientific names to learn. The names below are the most recently approved ones for some of the morels you might run across nearby. 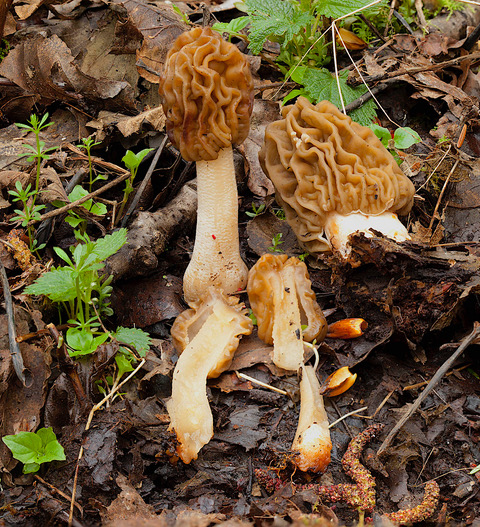 Early morel, Verpa bohemica
This species is not a true morel. It is quite common in Whatcom County and always occurs on the ground under black cottonwood (Populus trichocarpa). It may form mycorrhizae with that tree or it may decompose some particular substance in that tree’s parts. As the name suggests, Verpa bohemica occurs earlier than the other species described here, from late March into early May, depending on the timing of springtime warming. As you can see in the photo, they usually occur when the wild nettles are about hand high and the buds of the cottonwoods are breaking (note the bud scales in the photo). Two features can be used to separate these from true morels in the genus, Morchella (the species below). The cap is attached only at the very top of the stem and the stem is stuffed with a cottony growth (true morels are hollow). Although early morels are edible, they are so only for some people, causing “stomach upset” for others. It may be that certain strains of these mushrooms are toxic; they are toxic at certain times in their development or for certain people. I have gotten quite sick on Verpa bohemica in Oregon, but I have eaten them here (once) without a problem. In any case, I think the texture and taste are not worth the risk.

True morels (Genus Morchella) In our area, true morels occur from mid-April into June and even into July or later in some years, depending on the warming of the air and soil and the elevation of the habitat. As the season progresses, fruitings occur at higher and higher altitudes (and latitudes up the West Coast). The best places to find true morels are east of the Cascade mountains in year-old burned forests and in the open, non-burned ponderosa pine forests.

All our common morels (the ones I am covering here) are black morels, related to the European species, Morchella elata, which does not grow here. Black morels generally have blackened ridges around the pits and the pits are arranged in ladder-like rows. 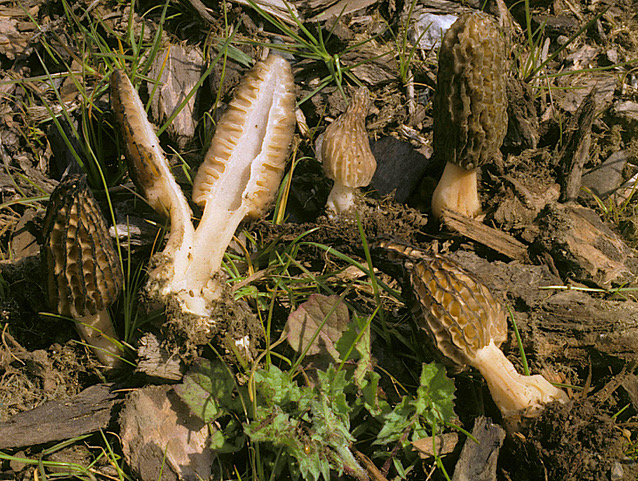 Landscape morel, Morchella importuna
The most common morel on the west side of the Cascades is this species. As the name suggests, it commonly occurs in wood chips and bark mulch, usually the year after new mulch has been added. Because of this habitat, it seems unlikely that they ever have a mycorrhizal role. They can be quite common in Whatcom County. If you are so lucky to have these in a landscaped bed, adding additional bark or wood chip mulch each year at the end of the summer may encourage them to stay around. 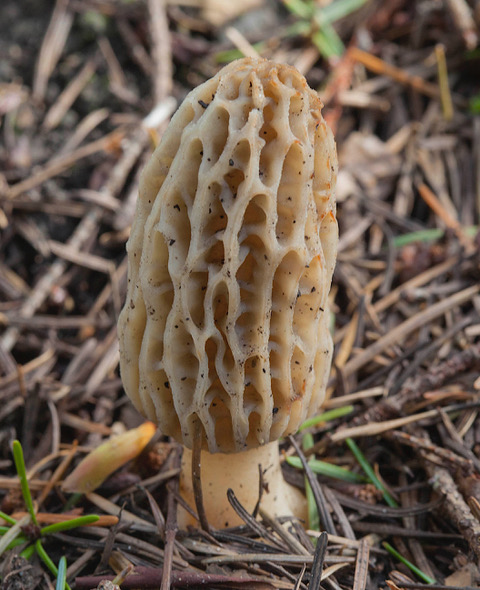 Mountain blond morel, Morchella tridentata
This is an interesting species that had been found throughout our region and recognized early on as a separate species. But for years it did not have an official scientific name. Although it is a black morel, it is light in color and the ridges stay light. In the 1990s, a group of mushroom enthusiasts in Seattle had separated this out in their collections, but were vexed as to its true identity. Finally in 2008, one of our finest amateur mycologists, Michael Kuo from Chicago, published a name, Morchella frustrata, nicely indicating the taxonomic confusion surrounding the species. Unknown to Kuo, another name had been previously coined for this species, and so, that name, Morchella tridentina, unfortunately, has priority. This species seems to occur fairly frequently in conifer woods, not necessarily high in the mountains. It is found sporadically in areas surrounding and close to the Salish Sea, but it also occurs up and over into the east side. It is never very abundant. 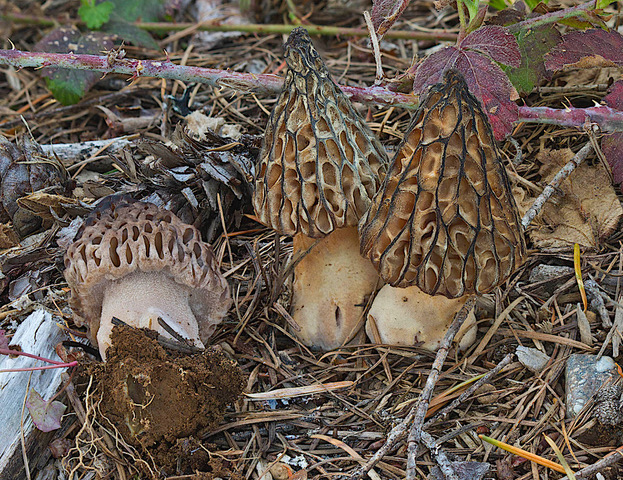 East-side forest morel, Morchella snyderi
The diversity of morels on the east side of the Cascades is considerably higher than on the west side. Because eastern Whatcom County is so high, most of the these species don’t occur in our county. However, morels are quite common if you continue over into Okanogan and Chelan counties. The illustrated “forest” morel is found scattered in the open ground under ponderosa pine. It is distinguished by its habitat, the deeply sunken margin of cap with stem and the tendency of the stem to be folded or pitted.

Elsewhere in burned forest areas (usually most abundant the spring after a widespread fire the year before), one will find a great diversity of “burn” morels. At least five species of black morels occur in burns, most of which are quite difficult to tell from one another. 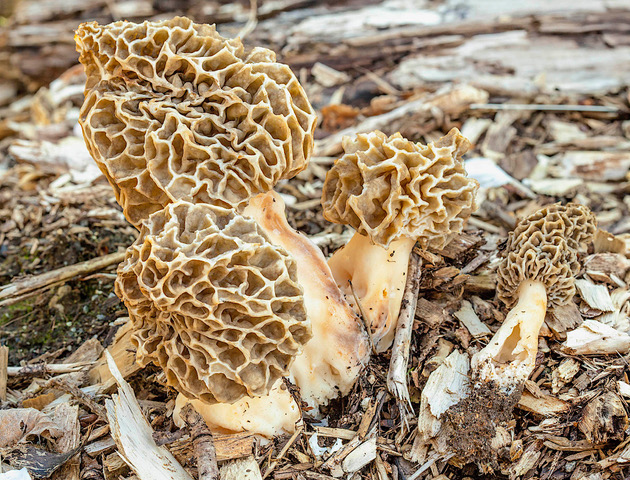 A garden morel, Morchella americana?
The identity of this morel is in question. It appeared in a local garden the year after the owner “seeded” the soil with water used to rehydrate dried morels purchased from a grocery. This morel is in the Morchella esculenta group, the yellow morels, separated from the black morels (all of the above) by having pits more randomly arranged (not in ladder-like rows) and in having a lighter coloration without dark edges to the pits (in all black morels but Morchella tridentina). If the dried morels were harvested in this country, they may be the eastern U.S. species, Morchella americana, or one of the other eastern species in the Morchella esculenta group.

In any case, the success of this “seeding” experiment, at least for whatever species this is, suggests a method you might try to produce morels in your garden. And, again for this species, it suggests that these were functioning strictly as decomposers since there were no trees in the garden and not enough time to establish a mycorrhizal association.
_________________________