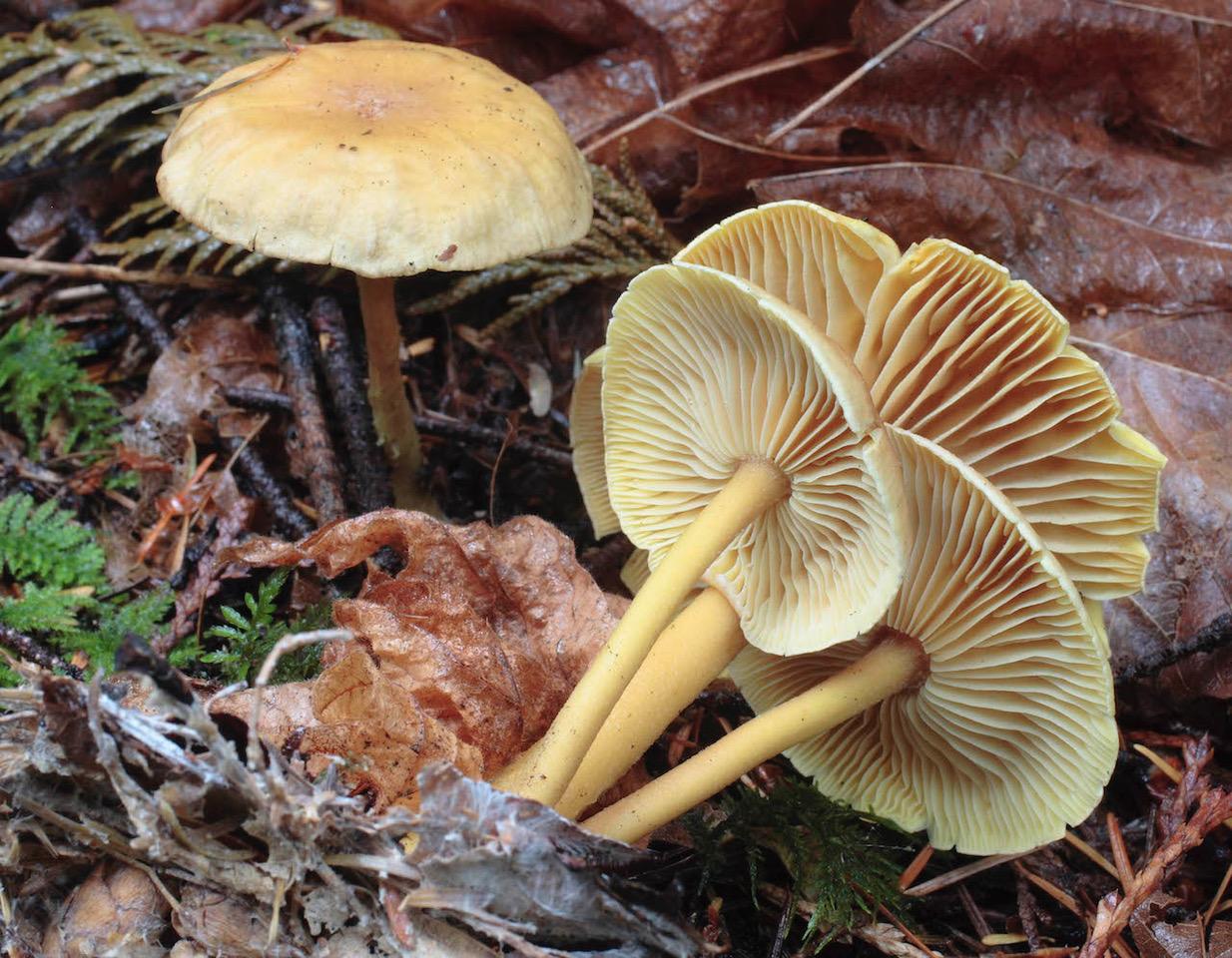 The subject of this column is a common local mushroom that hasn’t always been in Whatcom County. This mushroom has roundish (convex) yellow to light-brown caps, yellowish gills producing cream-colored spores and a tough, dense, yellowish stem that is fuzzy at the base. We have records from the Stimpson Family Nature Preserve (and earlier areas that became this county park) that show that this species began its invasion in the early 1990s.

Its presence was first noted in 1993, although it was undoubtedly here earlier. Pretty much every year thereafter, it has appeared, and, by far, it is now the species most often brought to me and others for identification. To answer a common question first thing: This is not an edible species! A final character is that it tastes quite bitter, and, although it may not be poisonous, you wouldn’t want to eat it. More on this at the end. Mushrooms are also cryptogams (like the lichen discussed in my last column). They are the visible, reproductive organs of a mycelium, the true body of the mushroom fungus. (A bit of this can be seen at the base of the mushrooms in the photo above and around the mushrooms in photo 1.) There are several ways this mycelium can relate to its surroundings. 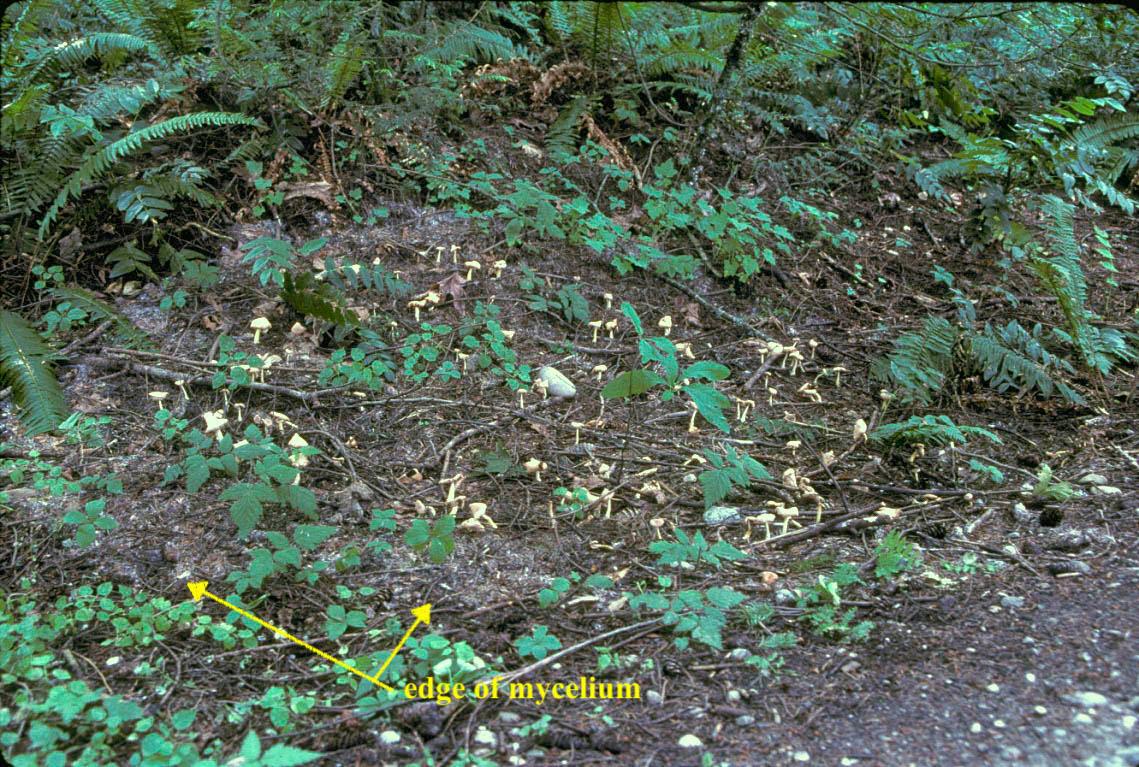 In the case of the fuzzy foot, which is a litter decomposer, the mycelium is a below-ground, “feeding net,” an interconnected web of tiny tubes (hyphae). The tubes grow into their environment, and, with the aid of enzymes that are released, digest larger food items. The smaller, digested products flow back into the mycelium. The mycelium exists from year to year and grows annually. When the time is right, the mycelium forms mushrooms by forming arrangements of hyphae that build the structures and expand, ultimately producing one-celled spores that carry the genes away on the wind to another place. The right time for this species is whenever there is moisture and cooling temperatures, usually in late August to October.

Fruitings Observed Early This Year
This year we began seeing new “fruitings” of these in July and early August. We say the mushrooms “fruit” and mycologists (fungus experts) call them “fruiting bodies,” although these organisms are not at all related to the plants that produce true fruits. In fact, mushrooms are more related to humans than they are to the plants they hang out with. But that is another story. The spores are like seeds, but are much smaller and otherwise differ in form and function.

In 1998, I spied a “fruiting” along the edge of a trail in Lake Padden Park (photo 1). It is difficult to see in the photo, but the limits of the mycelium are visible as a grayer background “oval” in the needles and leaves around the mushrooms. If there is anything good about this species, it is that, from the standpoint of one who teaches about fungi, you can actually see the mycelium around the mushrooms it produces. When you pull a mushroom up away from the ground, you will often pull some of the mycelium with it (see “fuzzy foot” photo above).

I returned to the same location at Lake Padden Park in 2004 and took photo 2 . This fruiting is from exactly the same mycelium that was in this position in 1998 (the broader area in the center, below the ferns is the same area). The scale of that photo is about half that of that taken in 1998. Thus, the size of the mycelium has increased in length by about five times! And, in area by perhaps 10 or more times, although the exact limits of the mycelium cannot be seen.

One final photo in this Lake Padden series is photo 3. This one was taken in 2013 in the general area of the first two, but back into the Douglas fir woods off to the right, and it only shows part of the entire fruiting. The area covered by Marasmiellus peronatus mushrooms is much, much greater than in 2004; whether or not all the mushrooms are coming from the same mycelium is impossible to verify. Suffice it to say there are a lot of Marasmiellus peronatus in this area, and at least some of them likely come from the mycelium that has been there since 1998, 15 years before. 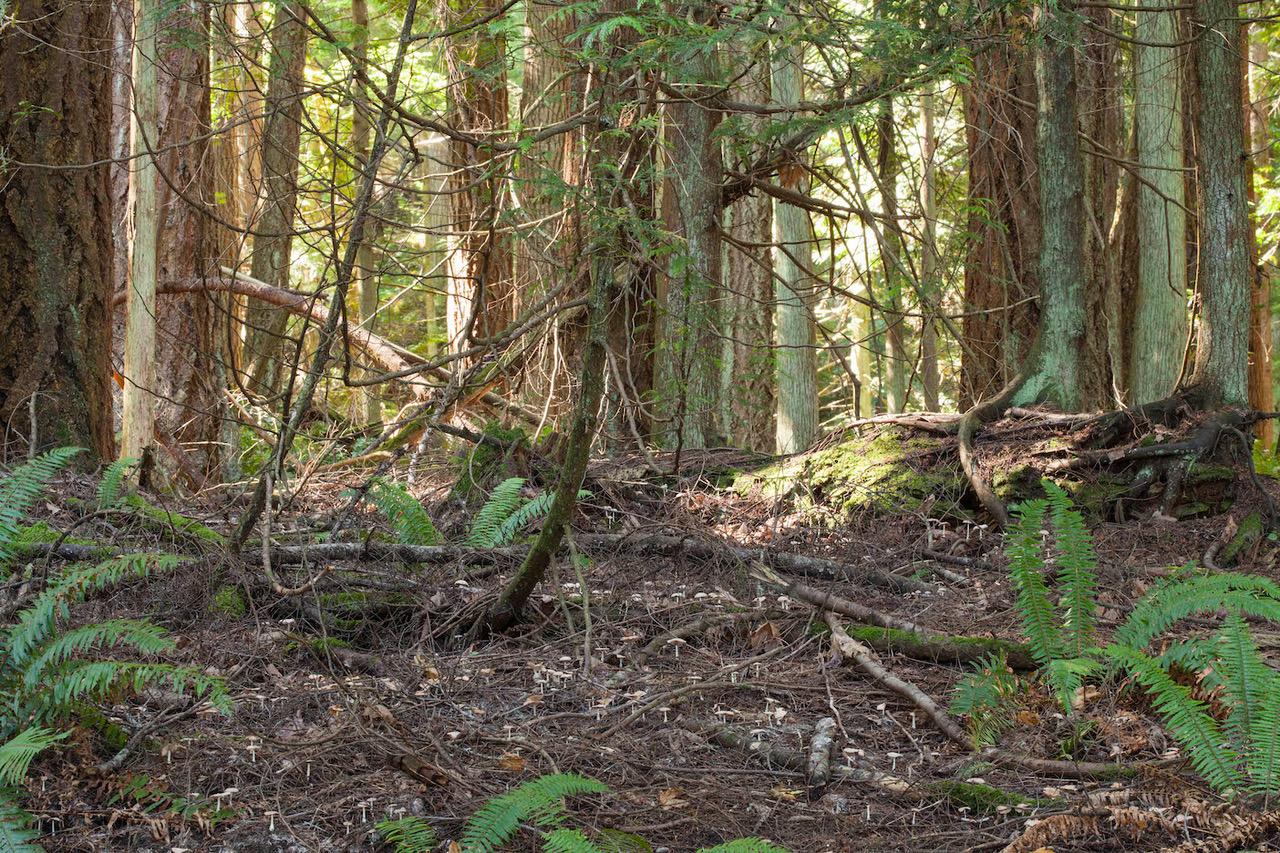 Naming Mushrooms
How do we identify this mushroom to give it its proper name? Mycologists have devised a system that is fairly easy to learn to get a person to the right area and then there are identification tools to get to the species. Briefly, the features that are important in mushroom identification are size and shape of the cap, color of spores in deposit (sporeprint), the way the gills are attached to the stem, presence and type of any rings or scales on the stem, and habitat.

Best to join the local mushroom club (Northwest Mushroomers Association — https://www.northwestmushroomers.org) and hang out with folks who know the ins and outs. The club’s annual mushroom show (this year: noon-5 p.m., October 20 at Bloedel-Donovan Park in Bellingham) is a good place to get a quick introduction. So how does this organism work? Its mycelium is very good at breaking down the substance of dead leaves and needles. Each year, a new supply of this litterfall is provided in the fall, which slowly builds up on the ground. The mycelium, which is already there (or a new one grows from spores), grows up into this food source and keeps doing so year after year. 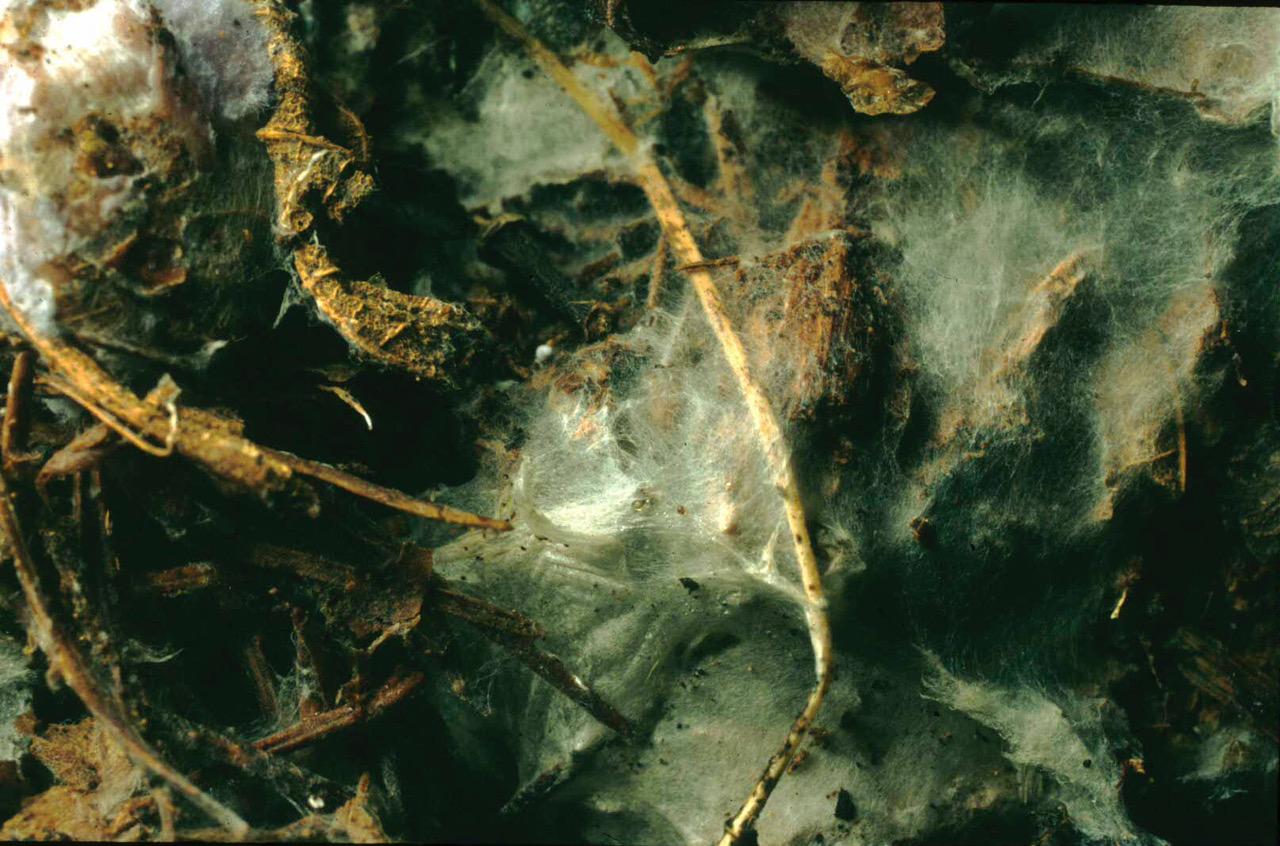 Other species in this and other, related genera are known to have enzymes that break down the principal components of leaves and needles: cellulose and lignin. The chemical units that make up these large molecules are relatively simple sugars like glucose, and related molecules. These are important energy-providing molecules that all organisms need to live and grow. In addition, when these structures are broken down, other molecules (minerals, fats and proteins) are also released or digested, and these can also be taken up by the mycelium.

Scientific Name Debated for Years
The proper scientific name for the fuzzy foot has been debated for many years. This species was first recognized in Europe in 1788, and was named Agaricus peronatus by the English naturalist, James Bolten. At that time, all mushrooms took the genus name Agaricus. For another 30-40 years, others interested in mushrooms referred to it by many scientific names (both genus and species), and placed this mushroom in the genera Gymnopus, Collybia, and Marasmius. I won’t bore you with all the details — Google “Gymnopus peronatus” for the full story.

The Swedish mycologist Elias Fries in his seminal works on mushrooms in the 1830s called it Marasmius peronatus. Fries felt that the mushroom was best regarded as a Marasmius, which he defined (among other criteria) as having very dense, tough stems that revived after drying and rewetting. In 1997, a detailed study by Antonin, Halling and Noordel looked at all manner of esoteric features (mostly visible under a microscope), and published a detailed splitting up of all the mushrooms that had been classified in all these genera. The fuzzy foot was found to best fit in the resurrected genus name Gymnopus. Thus, Gymnopus peronatus was the proper scientific name used for the last two decades.

Now (finally?), earlier this year, a group of mycologists headed by J. S. Oliveira have looked critically at the relationships of all these fungi and decided, based on relationships seen in several DNA molecular sequences, that the fuzzy foot is a Marasmiellus, Marasmiellus peronatus (Bolton: Fr.) J.S. Oliveira (the full, official name includes abbreviation of the history of the authors of its name at the end, the “author citation”). Until someone with more arguments against this name offers reasons against it, this is what we will call it. Or you could just use the common name, “fuzzy foot.” Just an aside: there is another Marasmiellus that occurs fairly commonly locally: Marasmiellus candidus (photo 4). It doesn’t look at all like the fuzzy foot and is an inhabitant of small twigs and stumps. 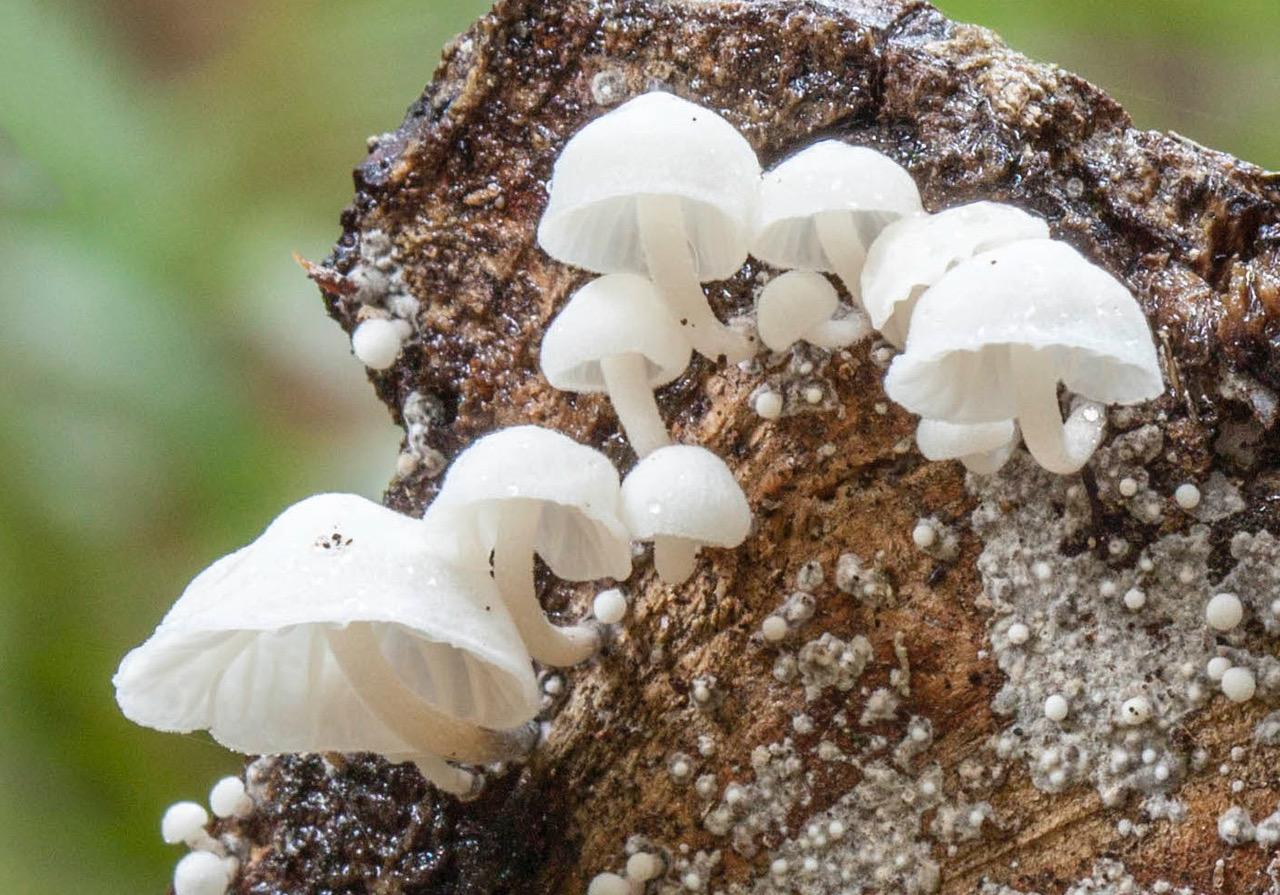 How did Marasmiellus peronatus get here? And why is it so successful? Without a detailed molecular study of examples here and from other places where it is found, both in North America and in Europe, it is anyone’s guess where our invader came from. Likely spores came into our area from somewhere else where it is well established and started a few (one?) mycelia here. The rest is history.

Fuzzy Foot Is Well Adapted Here
Why is it successful? This species seems to be very well adapted to our lowland, mixed forests that provide it with a diet of plant litter that it has the enzymes with which to attack. More importantly, and more dangerously, local species that use the same habitat, do not seem to be able to compete with this species. This is a serious consequence because it means, ultimately, unless these local species themselves can adapt (through microevolution) to use the habitat just as well (or better), these local species are doomed to extinction. Unfortunately, the future for the fuzzy foot seems very good, and, for other species, more dire. Given the structure and biology of this organism and its great prevalence, there is little that we can do but watch.

Finally, a bit about edibility. A final taste test (put a small bit on your tongue tip, test, then spit it out and wash out your mouth) for Marasmiellus peronatus produces an extremely bitter result. To my knowledge, this has inhibited everyone from experimenting further with potential edibility. True, most mushrooms are harmless or at least won’t kill. Most poisonous species (if Marasmiellus peronatus fits here then it) will just make you sick to your stomach for a few days. However, some species can kill and there are some very poisonous species that, though they will make a human quite sick, they won’t kill the human but they will kill their dogs (especially small ones).

These are species that contain muscarine: most species in the common genus Inocybe, a few Clitocybe species, particularly the lawn-inhabiting Clitocybe dealbata. The mycelium of Inocybe grows in a relationship (mycorrhizae) with tree roots but can fruit in lawns. Dogs have died in Bellingham after eating Inocybes. Some (but not all) Amanitas and some Galerina species contain deadly amanitin toxins and will also kill (humans and dogs). Amanita phalloides has been found in several locations in Bellingham and is particularly dangerous. It seems to prefer associations with cultivated hazelnut and non-native oaks, but may be becoming naturalized with native tree species. All Amanitas, like Inocybes, are mycorrhizal (I’ll talk about that relationship in a future article).