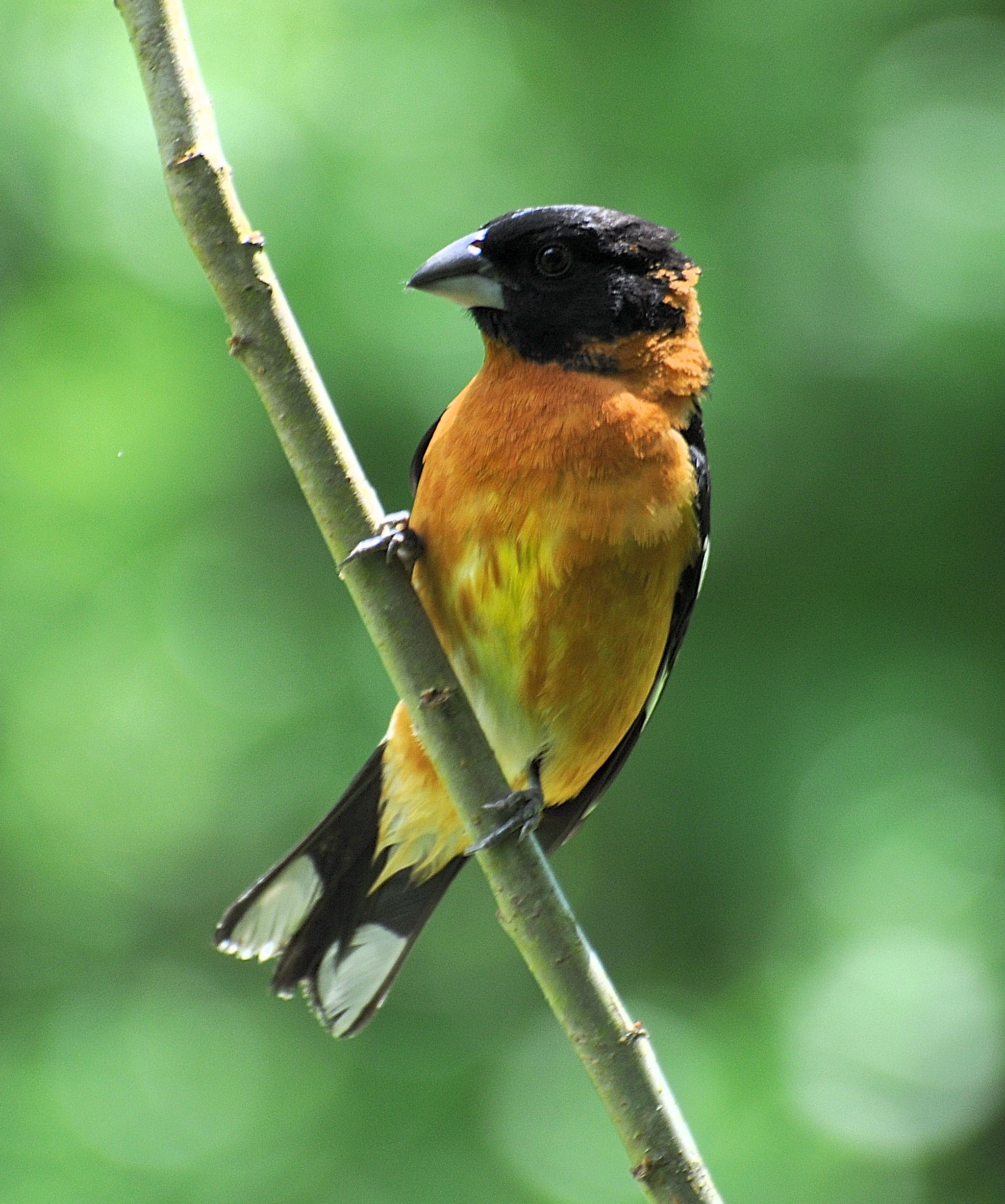 The Birds
During this time of year the seasonal transition is mostly complete. Many of our wintering birds have left and made room for the species that are coming in to spend the spring and summer with us. What this means is that our resident birds will have to share nesting space with the Neotropical migrants that began arriving as early as mid-February. Tree swallows were the first to arrive, followed closely by their violet-green cousins. Even though robins are the proverbial harbingers of spring, it’s the swallows that herald the seasonal change here in the Northwest. Fact is, we have robins in our backyards the year round.

The sounds of winter have transitioned from the varied and not-so-tuneful calls of waterfowl to the melodious songs of courting passerine species. Needless to say, spring is the best time of year to hone your skills at identifying birds by their songs and calls. The quiet of winter mornings has been replaced by the sounds that have often been referred to as the dawn chorus. Swallows might be the first arrivals but they’re not known for their songs, so the first singers always seem to be the red-winged blackbirds. I grew up with these vociferous birds as permanent fixtures in the rice fields surrounding my hometown. Their song is pure nostalgia for me and is one of the most recognizable sounds in nature. 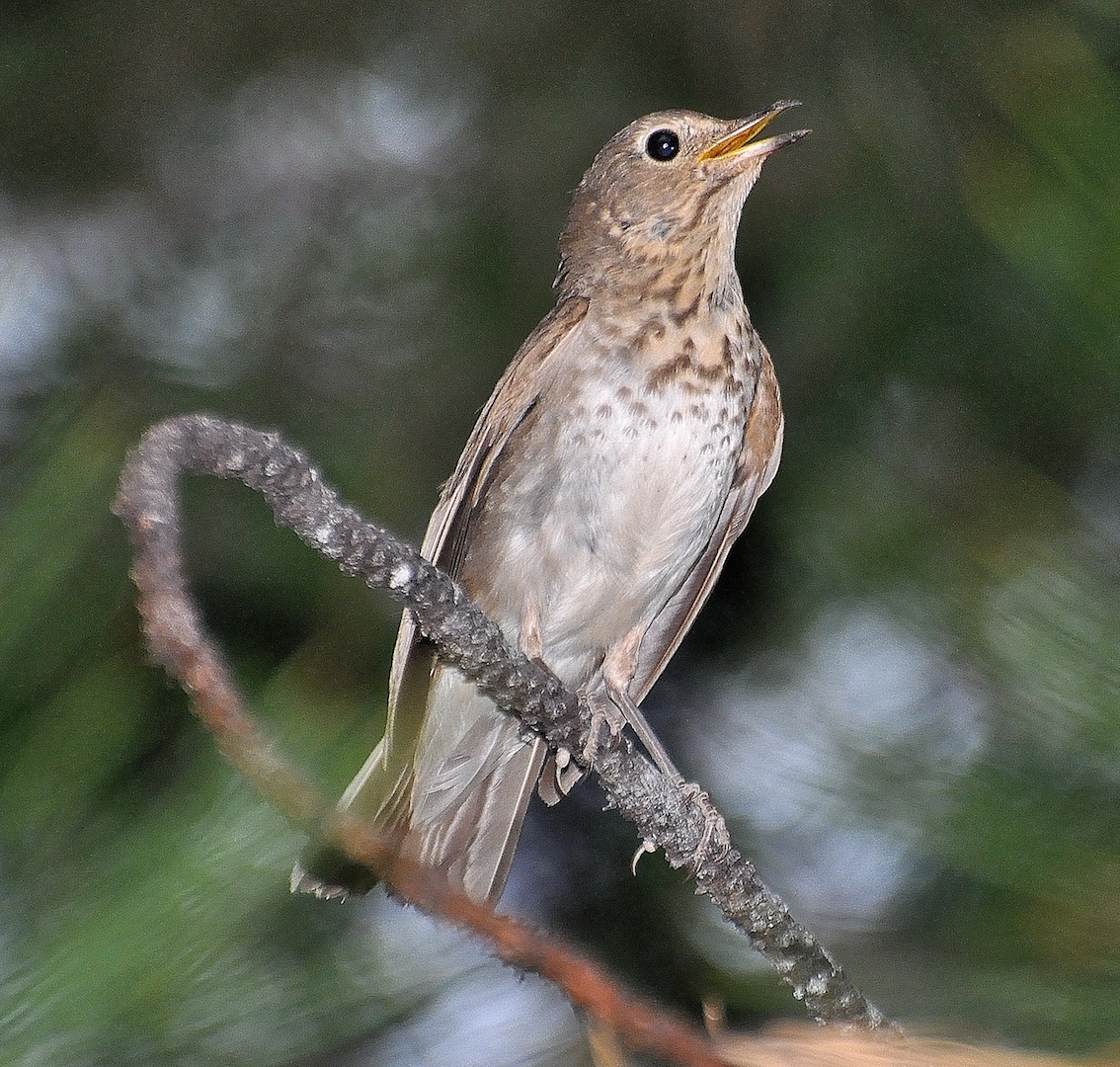 Black-headed grosbeaks and Swainson’s thrushes offer two of the most easily recognized songs of our local birds. The grosbeak’s song is similar in tone to that of robins, but with eccentric musical tangents that are often amusing to the ear and let you know that what you’re hearing is certainly different. The descending spiral tones of the Swainson’s create an ethereal sound that is a comfort to our ears on long summer evenings.

As May arrives and segues into June, the quiet and gray winter woodlands and backyards will once again be replaced by riots of seasonal sounds and color. Wilson’s warblers and western tanagers will present their breeding finery and songs that are difficult to imagine. Spring birds and better weather go hand in hand to lift our winter-weary spirits. Take a walk, breathe deeply, and enjoy the music.

The Nests
Of the many impressive adaptations in the avian world, quite possibly the most remarkable is the ability of birds to build nests to lay their eggs and raise the young of the year. Not all the nests are the same and many are engineering marvels. To know that they create them without hands only adds to the nest-building mystique. Some birds, like eagles, return to the same nests year after year, adding to the original creation until it becomes enormous and almost like a landmark to birdwatchers. Bird nests vary and are perfectly suited to the basic requirements and habitat preferences of the particular species. The nests of our local birds can be divided into the following categories:

• Scrape. This is the least creative or time-consuming form of nesting since, as the name implies, it consists merely of a scrape in the sand or gravel at a nesting site. The parent bird creates a rounded or cup shape in the surface that is substantial for holding the eggs in place. This type of nest is favored by birds like killdeer and other shorebirds, as well as Caspian terns. No nesting material is required, and any open area with loose substrate will serve the purpose. Many shorebirds and terns nest in sizable colonies to protect the young from predators.

• Burrows fill the need for birds like belted kingfishers and pigeon guillemots. All that’s needed is a sandy bank or bluff in which the birds can excavate to the desired depth and interior dimensions to accommodate their young until they fledge. Northern rough-winged swallows also create burrows, often in sizable colonies.

• Cavities are preferred by a large number of birds and are often the handiwork of the previous builder/occupants … woodpeckers. Some of the smaller waterfowl species, along with owls and smaller perching birds, utilize tree cavities for nesting.

• Cup nests are the standard nesting shapes that we imagine when we think of bird nests. No matter the nest, there is usually a cup-shaped receptacle involved. n Platforms, whether natural or manmade, have become the preferred sites for many ospreys.

• Pendant, or hanging nests, are quite possibly the epitome of avian engineering. Our most common builders of this type of nest are the bushtits. One of their nests is the combined effort of two of our smallest birds that spend entire days constructing an impressive, hanging structure that resembles a dirty sock hanging from a branch.

While all of these nest types are different in the specifics of overall construction, the essential part of the construction is the provision of a receptacle for the eggs. From the small nests of hummingbirds to the often massive structures built by eagles, the eggs are laid in a structure that holds them securely and provides space for the parent birds during the incubation period.

Nesting Boxes
At one point when the numbers of certain species were in decline, it became obvious that many of the smaller cavity-nesting birds like chickadees, wrens, and nuthatches were having a difficult time finding suitable nesting sites. It was determined that they were competing for sites with introduced European starlings and house sparrows. In addition to the avian competition, clear-cutting and indiscriminate land-clearing practices were taking away a lot of their traditional nesting trees.

Even though the stereotypical birdhouses had been around for years, they weren’t built with the proper species-specific dimensions in mind. The plight of this particular group of birds came into a sharper focus through the efforts of the National Audubon Society and other conservation organizations. Concerned professionals and citizens began widespread distribution of printed materials that served as guides for building boxes that were suited to individual species. Nesting box plans were geared to accommodate everything from wood ducks and barn owls to chickadees. The nationwide effort resulted in improved census numbers for cavity nesters.

On the local level, Rae Edwards, then Education Chair of the North Cascades Audubon Society, learned of a grant program the state office was offering for conservation-related projects. She and I put our heads together to start the nesting-box program that picked up speed almost immediately. The interest from the public created a cash flow that allowed us to keep the program going for several years. The original grant provided the seed money that kept the nesting boxes moving. It was very pleasing to put these nesting boxes into the hands of people who embraced the idea that we could make a difference, and in part resolve the dilemma facing our cavity-nesting birds.

To a great extent our nesting box program followed the lead of the late George Garlick, who introduced me to a unique design specifically created for violet-green swallows. Instead of the traditional vertical-shaped box, George’s boxes were horizontal with a diamond-shaped opening. In open areas where violet-greens are active, these boxes provide perfect accommodations for these beautiful birds that offer natural control of flying insects. When you’re out and about looking for birds and see one of these unique boxes, think of George.
____________________________________