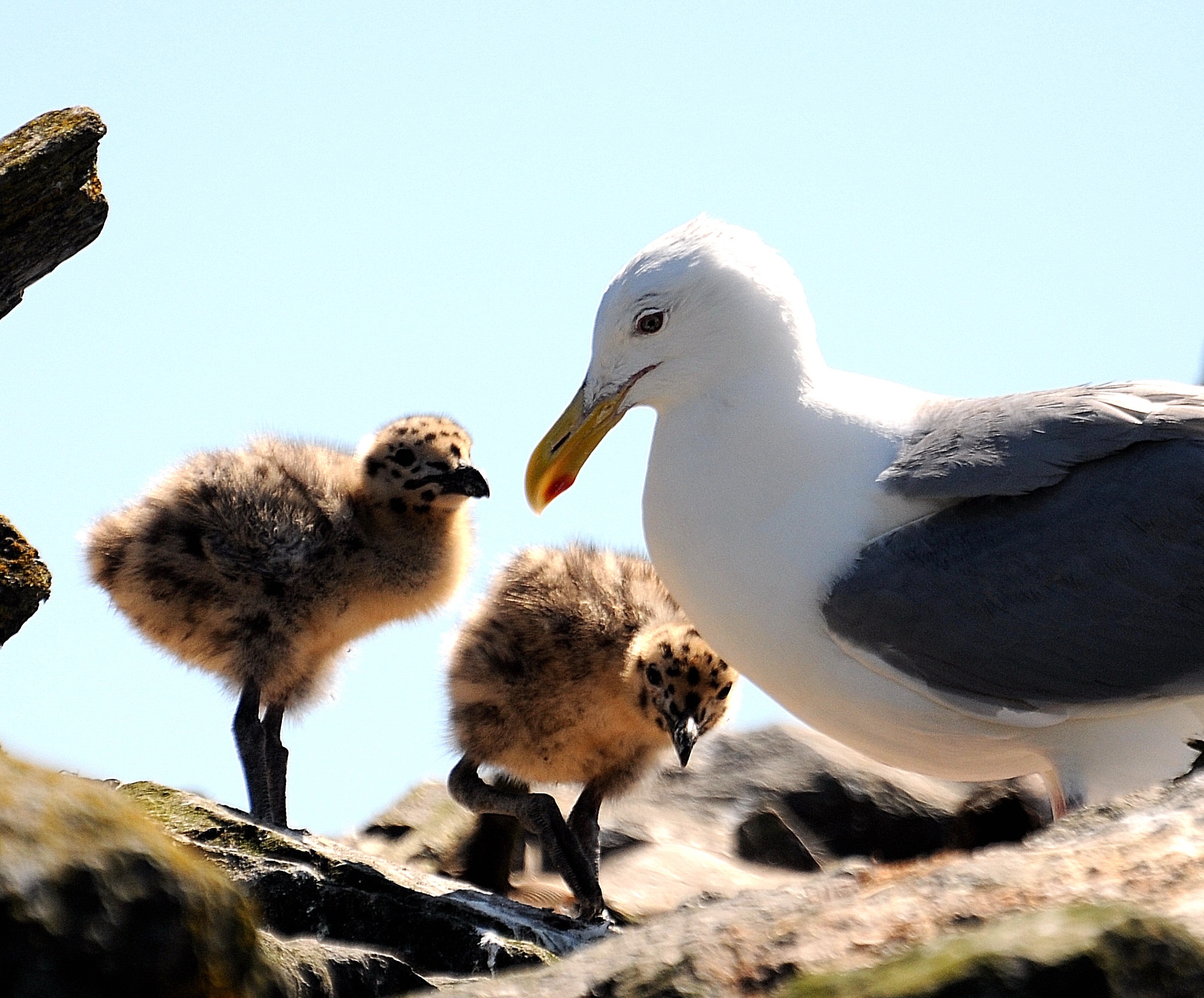 By early June, our winter birds have left for their traditional breeding grounds to the north and east. When you consider the thousands of birds that wintered here, you might think their departure leaves us without any significant birds to nest here. That couldn’t be further from the truth. When you combine our year-round residents with the seasonal influx of migrants from the Neotropics, the balance is complete and we have more than our share of nesting birds and their offspring to enjoy well into the warmer months.

In spring and into early summer, numerous species are involved in the seasonal rituals of courtship, nest building, and breeding throughout Whatcom County. With the county’s varied habitats that cover approximately 2,180 square miles from sea level to the 10,778-foot summit of Mount Baker, nesting sites and opportunities abound. We have birds nesting in marine and terrestrial habitats that include urban and suburban woodlots, lakes, agricultural lands, forests, and mountain slopes. This varied terrain, from glaciers to salt water, was one of the things that drew me here 43 years ago.

When I look at the numerous species that nest locally, there are far too many to list individually, so let’s look at groups of birds and maybe take even closer looks at a few that we’re more likely to see than others. Reaching back to previous columns, I’ll utilize the steadfast and logical Peterson system of identifying birds, which transposes perfectly to keep some sense of order to anything relating to birds in general. To help keep track of the who’s who in this short list, I’ve printed the group names in bold type.

In our first group of birds, we have the Swimmers, which are ducks and duck-like birds that are quite common throughout the year. As far as our nesting species, it’s difficult to go anywhere these days without seeing a female mallard and a trailing file of ducklings. The same is true of Canada geese and their goslings. On the other hand, more exciting species like wood ducks and hooded mergansers nest in manmade nesting boxes and inhabit places like Scudder Pond and Lake Terrell. Harlequin ducks spend most of the year on salt water, but fly up rivers like the Nooksack to nest. I once found a female with six ducklings on the river upstream from the town of Glacier. 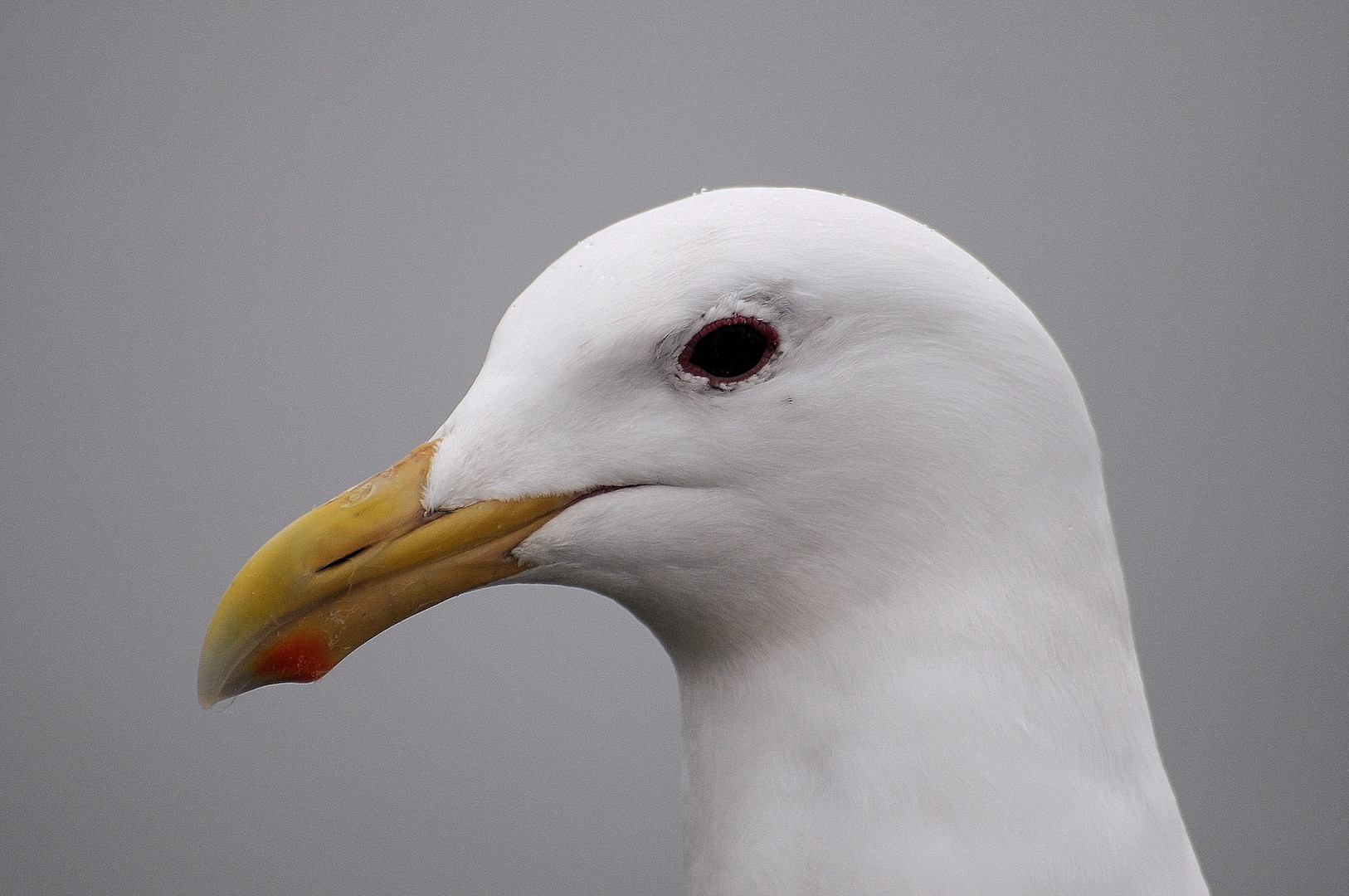 My favorites of the eight groups are the Aerialists, which are well represented locally. Our common glaucous-winged gulls nest in so many places that they can certainly be called opportunistic nesters. From rooftops in the downtown area to the breakwaters at Bellingham and Blaine, these reliable gulls continue to add to their local numbers. Also notable are the Caspian terns that you might have heard about when a large colony nested on the old Georgia-Pacific paper mill site. They are still in the area and, since their nesting colony was evicted from the waterfront, their new nesting sites remain undisclosed. 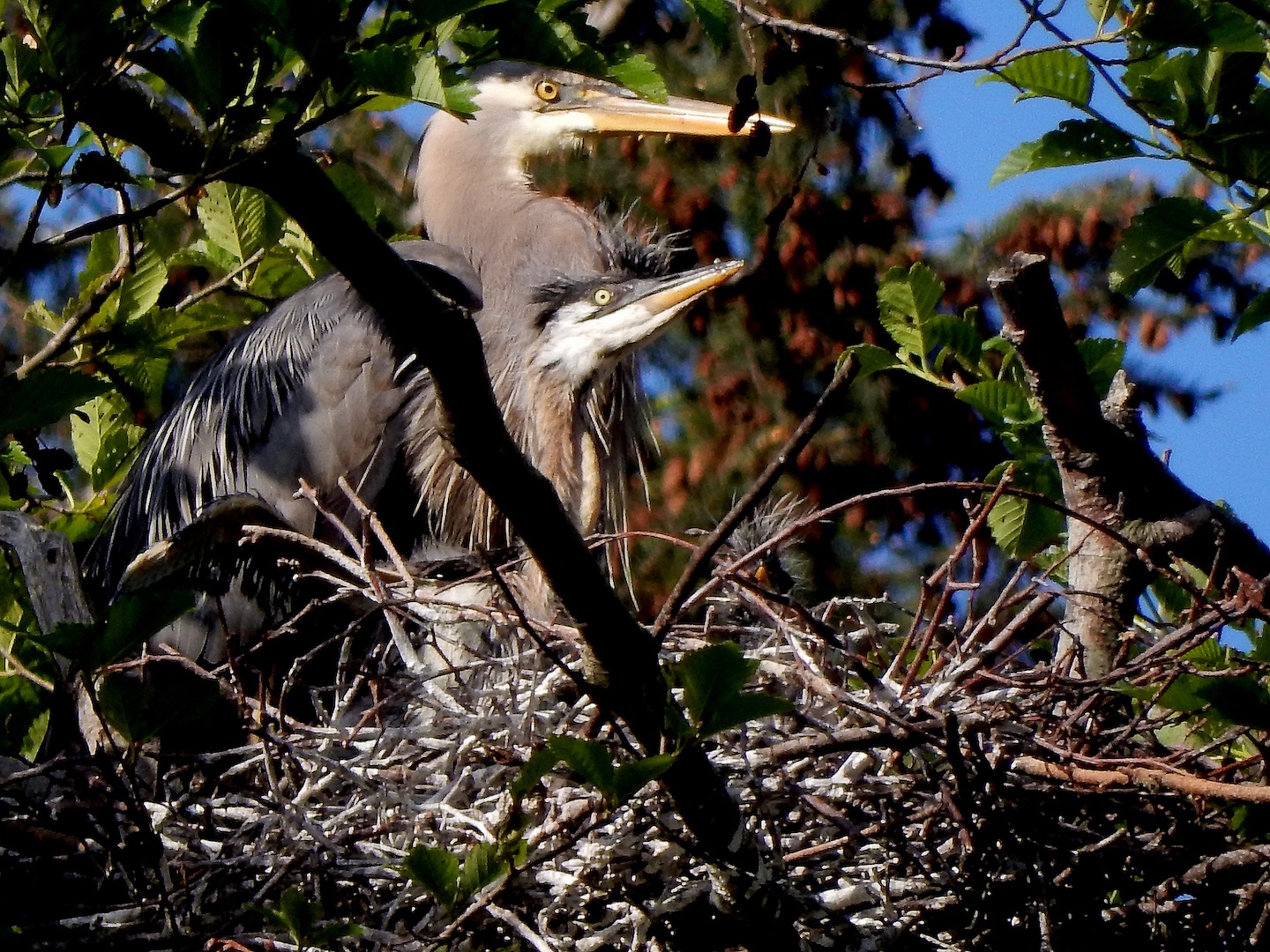 The predominant species in the Long-Legged Wading Bird category is the inimitable great blue heron. They are year-round residents that nest in large colonies known as heronries or rookeries. There have been large heronries that were abandoned due to predation by bald eagles, but there are still a few of note. The most accessible one locally is the Post Point heronry behind the city’s wastewater treatment plant on Southside. This is a unique location that enables us to view every phase of the lives of these magnificent birds, from courtship and nest building to raising the young of the year. Last year’s count had 46 nests on the site.

The large numbers of Smaller Wading Birds have migrated, but we do have representatives like killdeer, black oystercatchers, Wilson’s snipe, Virginia rails, and soras. While the latter three are secretive birds of wetlands, killdeer and oystercatchers let you know they’re around with their highly recognizable calls. I’ve monitored nesting pairs of oystercatchers along the Chuckanut shoreline for several years and found new nesting pairs on the breakwater at Blaine harbor. Killdeer are typical plovers and it always surprises me when I find their nests … a simple scrape in loose gravel or sand in wide open areas. Their distraction display is almost comical, but it seems to work to keep predators away from their eggs.

When it comes to Fowl-Like Birds our choices are somewhat limited in the lowlands, so that’s where the high country habitats come into play. When hiking trails become snow-free, we find opportunities to hear and observe sooty and ruffed grouse, as well as white-tailed ptarmigan if you go high enough. Ring-necked pheasants, northern bobwhite, and wild turkeys are introduced species, but have established small breeding populations of their own around the county.

Most avid bird-watchers are keen on the Birds of Prey that nest locally. Everyone knows where at least one bald eagle nest is, and there are numerous pairs of eagles that remain here throughout the year. Most of their impressive aeries are found in the lowland areas of the county, usually close to water. Those that nest close to water are often in competition with the migratory ospreys whose diets consist primarily of fish. Lake Padden has always been a good location to observe this competition firsthand. Merlins also nest locally and the first pair on South Hill seems to have spawned several generations in the process.

Whatcom County has numerous owl species that nest locally, from great horned to the smaller saw-whet and western screech owls. Northern pygmy owls nest in the Chuckanut Mountains above Larrabee State Park, while barred owls nest in Cornwall and Whatcom Falls parks and along the Interurban Trail. Barred owls have become notorious with their “attacks” on humans. It’s territorial behavior that happens primarily during the nesting season.

The Nonpasserine Land Birds consist of a variety of desirable species like hummingbirds, woodpeckers, and kingfishers. Anna’s hummingbirds are year-round residents and compete with the migratory rufous hummingbirds for favored feeding and nesting locations. Ranging in size from the large pileated to the almost diminutive downy, the family of woodpeckers is well represented among our local birds.

The most numerous species when it comes to local nesting birds are the Passerines or perching birds. They include some of the most common birds, as well as the migrants that we often use to set our calendars every year upon their arrival. No matter when you started to develop an interest in birding, you knew American robins before anything else. Robins are widespread and nest throughout the county, sometimes in unique locations atop light fixtures and other such niches that tend to stay dry.

Swallows are nature’s gift to us in so many ways. They arrive as the number of flying insects begins to build, and they play an effective role in controlling their numbers throughout the warmer months. Along with the job they do on pest control, their exuberant and seemingly endless aerobatics are a joy to behold. In the county, we have seven species that nest locally and when you combine them with our Vaux’s swifts, our insects are under control. Along with robins and swallows, other nesting passerines in Whatcom County are vireos, grosbeaks, sparrows, finches, chickadees, and more species than this column has room to list.

If you can get your hands on the Checklist of Whatcom County Birds that I compiled for North Cascades Audubon almost 10years ago, you’ll have a clear view of our veritable wealth of nesting birds. I know from personal experience of over four decades of birding in Whatcom County that we can spend endless days in the field observing every phase of this seasonal phenomenon … without going far from home. These days I practice social distancing from fellow humans, but I get close to birds every chance I get.