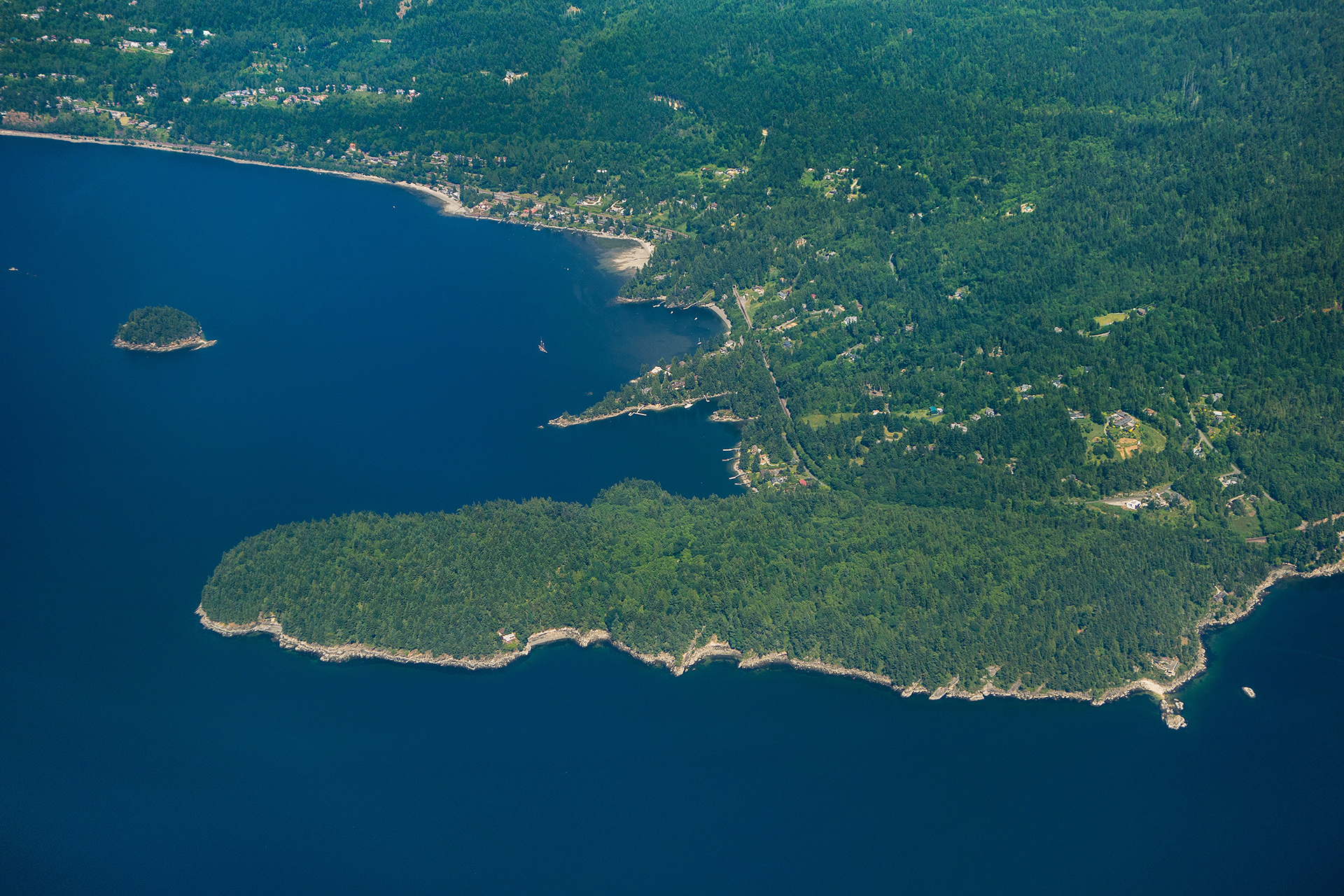 Shortly after purchasing the property, Bishop sought out the WLT, and serious conversations began. Early on, he said he felt privileged to own such a magnificent property, and would respect both the community and the environment when making his proposal. We have heard such proclamations from other developers, but Randy Bishop has proven true to his words and beyond what we ever expected.

Rather than telling us what he might be willing to do, Bishop asked, “What does the Land Trust want on Governors Point?” The question started a conversation about a nature reserve with significant conservation and public access values, and led to a visit to the Stimpson Family Nature Reserve. A walk in the woods is worth a thousand words.

Sixteen Clustered Homes
Rather than the allowed 25 residences, Bishop will build 16 custom-designed homes, one at a time. He describes his plans for “a limited number of architecturally rich, small footprint homes” clustered on the west side of the peninsula: “I envision that the homes would be limited in size to under 2,900 square feet, not visible in any way from Chuckanut Drive, and would be sited with respect to limit their visual interruption of the beautiful natural landscape. Natural materials, green roofs and site nestling would all be maximized in service of this idea. Each of the homes would be designed by our architecture studio, Omer Arbel Office in Vancouver, and built-out over many years. Part of the architecture brief would be quality over size, site respect over ego and sublime over flashy. The idea is to consider architecture and landscape as one and the same thing … not as opposed to each other.” Each year, the public will be allowed an architectural tour of the homes.

When told that it sounded like he saw the property as a canvas for his artistic expression, Bishop responded, “Yes, that’s about right.”

Two-Thirds to Be Nature Reserve
As a complement to the residential development, Bishop has committed to donating at least two-thirds of Governors Point to Whatcom Land Trust for a nature reserve. The nature reserve will include a two-plus-mile loop foot trail providing public access to the prime beach on the east and west side of Governors Point and to the far northern point of the peninsula. The east and west beaches will also be accessed by self-propelled watercraft such as kayaks, canoes and paddleboards.

Cooperation and mutuality has marked progress at Governors Point. When WLT expressed a desire that the public have trail access to the views at the tip of the property, Bishop readily shifted the residential lot line bisecting the tip so that the public trail could skirt the whole end of the peninsula. This change also confirmed Bishop’s commitment that no residences be visible from Chuckanut Drive. Bishop’s aesthetic sensibilities will permeate the nature reserve as well as the residential development. He has reserved the right to design any built features in the nature reserve such as signs, handrails and bridges. When we said that we probably could not afford those designs, Bishop agreed to pay anything above the normal cost of the feature.

Bishop’s original commitment to the nature-reserve property donation was contingent on Bellingham providing city water to the homes on Governors Point and Whatcom County’s grant of necessary development permits. The most uncertain of these contingencies was the provision of city water. Under a Bellingham ordinance, the City Council has the authority to supply city water beyond the city limits and urban growth boundaries if the council determines that to do so is in the best interest of Bellingham. This is strictly a political decision. 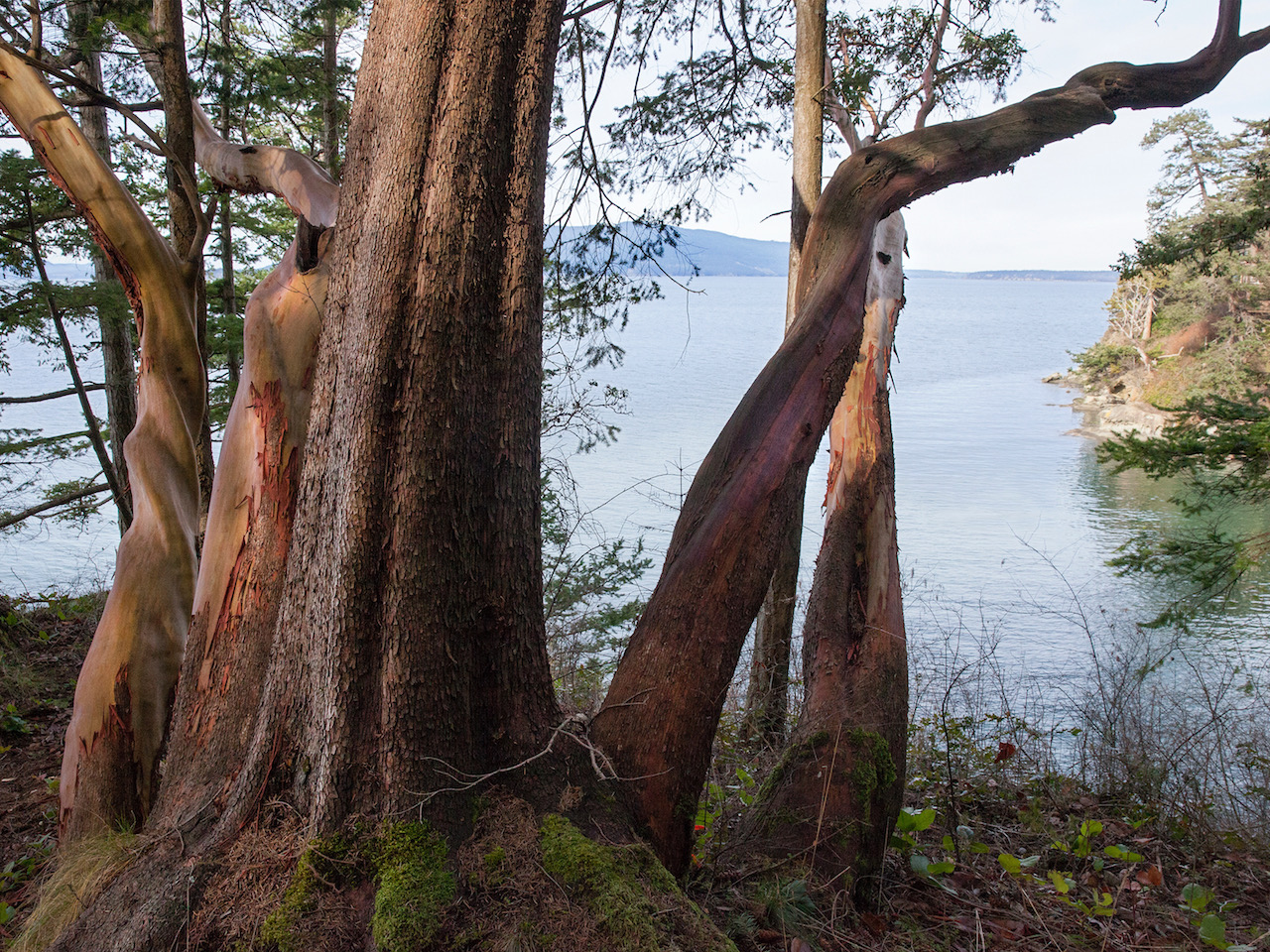 Conservation of Forest and Shoreline
Because Bishop’s proposal for Governors Point created very substantial public benefits, including conservation of a mature coastal forest and the last opportunity in Whatcom County for quality saltwater shoreline public access, WLT decided to actively support Bishop’s application for city water. On August 20, 2018, with the mayor’s support, the Bellingham City Council unanimously approved provision of city water to 16 homes and two supplemental locations on Governors Point. Because of Bellingham’s population density and proximity to the property, the plans for Governors Point would largely benefit Bellingham’s citizens.

Though Bishop and WLT have a signed agreement detailing the future of Governors Point, donation of the nature reserve will not occur for another year and a half because of the administrative process for obtaining residential development approvals from Whatcom County Planning and Developments Services.

Our relationship with Randy Bishop has not been one of the developer pushing for development and the Whatcom Land Trust pushing for conservation and public access. Instead, we have worked together as partners toward a shared vision for the future of Governors Point. We have appreciated Bishop’s respect for the environment and community and his architectural vision for modest homes compatible with this special landscape. He has been enthusiastic about the nature reserve, both the conservation of a mature coastal forest and extensive public access, and his firm’s design of the built elements is sure to marry the two sides of Governors Point into a cohesive and special relationship.
___________________________

Rand Jack is a founding board member of Whatcom Land Trust and for 35 years has negotiated conservation land deals for the organization. He taught at WWU for 35 years and practices law irregularly. Rand carves birds, travels and claims to have three nearly perfect grandchildren.