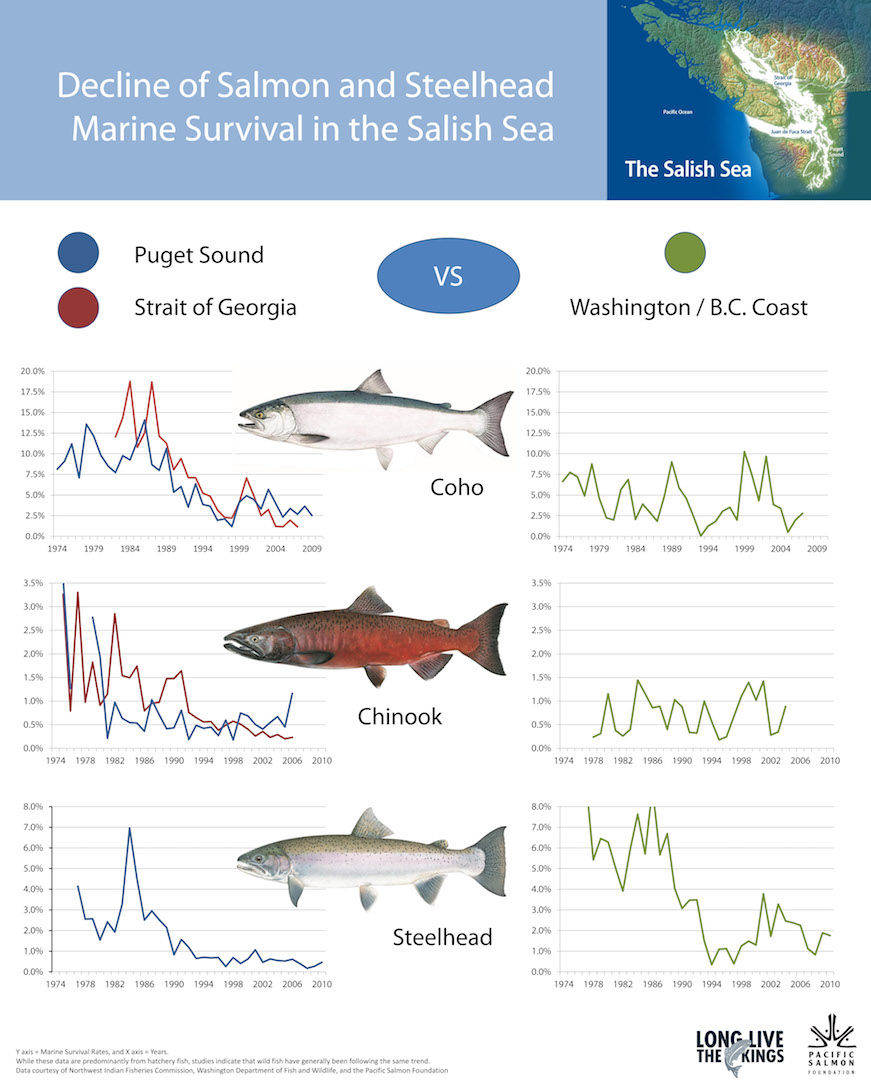 An intensive research program in the U.S. and Canada is studying why so few salmon in the Salish Sea are returning home to spawn. Studies by more than 200 scientists on both sides of the border have revealed a tangled food web involving a multitude of predators and prey surrounding their primary species of study: Chinook and coho salmon and steelhead trout. To survive, these salmonids must not only become capable predators, but they must also remain vigilant to avoid larger predators trying to eat them. Christopher Dunagan has written a four-part series on the Salish Sea Marine Survival Project, including new findings presented at the 2018 Salish Sea Ecosystem Conference last spring in Seattle.

Part 1: What’s Killing Puget Sound’s Salmon and Steelhead?
“Ocean conditions.” In years past, those two words were given as the only explanation for why coho or Chinook salmon failed to return to Puget Sound in numbers predicted by salmon forecasters.

Even in good years, when large numbers of salmon would leave the streams, there was always a great deal of uncertainty about how many would make it back home. Mystery surrounded what the fish were doing out in the saltwater. Were they starving or were they thriving?

“It was a black box,” says Dave Beauchamp, chief of the Ecology Section at the U.S. Geological Survey in Seattle. “If the fish didn’t show up as expected, then we would say it was poor marine survival caused by ocean conditions.”

Studies by more than 200 scientists on both sides of the border have revealed a tangled food web involving a multitude of predators and prey surrounding their primary species of study: Chinook and coho salmon and steelhead trout. To survive, these salmonids must not only become capable predators, but they must also remain vigilant to avoid larger predators trying to eat them.

In some years, finding enough of the right food can be a problem. In Puget Sound, disease and toxic chemicals can further weaken fish and make them vulnerable to being eaten. And when nature produces an abundance of larger predators — from big fish to birds and marine mammals — such conditions can tip the balance against young salmon trying to survive.

Life or Death?
The percentage of young Chinook and coho salmon that survive to become spawning adults varies from one stream to another. In general, their survival rates in Puget Sound have declined dramatically over the past 35 years.

During the 1970s and early ‘80s, one out of 10 coho would frequently make it back to spawn, whereas since 1990 rarely have more than one in 20 survived. For Chinook, the survival rate has dropped from roughly three in 100 during the 1970s to no more than one in 100 since about 1989. Puget Sound Chinook were listed as threatened in 1995. In contrast, Chinook and coho returning to streams along the Washington coast never experienced the ongoing downward trends seen among Puget Sound populations.

For steelhead, survival went through a downward trajectory along the coast as well as in Puget Sound. But coastal steelhead have generally fared better than those in Puget Sound, where — except for a recent uptick — survival has held below one in 100 since the early 1990s. Steelhead were listed as threatened in 2007.

International Research Effort
The Salish Sea Marine Survival Project, coordinated by Long Live the Kings in the U.S., has helped identify many threats to the survival of Puget Sound Chinook, coho and steelhead. Each species has its unique life history and thereby faces its own set of problems. Smaller groups of salmon, such as populations within a species, often share similar problems. But, since no two estuaries are alike, Chinook in one estuary may face different threats from Chinook in another estuary.

Meanwhile, for the most part, chum, pink and sockeye salmon have not undergone such dramatic declines. The reasons are tied to ecological processes that ripple through the food web, according to scientists, but exact differences have not been identified.

Because of ecological connections, researchers must study not only what the salmon are eating in various locations, but also how the salmon’s prey manage to survive. Such interactions must be considered through all life stages of salmon — from their first days after hatching to their final days of spawning. The Salish Sea Marine Survival Project has focused on the early stages in saltwater, when studies have revealed especially high rates of mortality.

Dominant Species of Plankton Changing
Dominant species of plankton, which support the entire food web, appear to be changing within Puget Sound — to the detriment of not just salmon but many other marine organisms, according to marine biologists.

One key to the survival of salmon and steelhead can be their size at certain life stages, according to Beauchamp. A rule of thumb is that a fish can eat another fish up to nearly half its size. If a fish can grow rapidly — thanks to conditions in the stream or estuary — the number of predators capable of eating them will be smaller. With growth, their swimming speed is likely to increase, giving them a better chance to get away from predators.

Competition is another issue, Beauchamp said. In Puget Sound, coho and Chinook salmon as well as herring may be eating the same things at times.

“In the Strait of Georgia (in Canada), herring stocks hatch at a later point in the growing season,” Beauchamp said, “so they are smaller, and juvenile salmon can feed on them directly.”

Predator–Prey Connection
Seals and sea lions, whose numbers have grown since the 1970s, have been identified as a potential predatory threat to Chinook, coho and steelhead. But researchers recently learned that a simple cause-and-effect relationship might not exist. Perhaps (and this speculation is undergoing careful review) harbor seals may actually prefer fish other than salmon — but they are forced to consume what they can find.

With respect to the place of salmon in the food web, predatory threats are often characterized as “top down,” while the food issues are called “bottom up.” Other problems, such as toxic chemicals and disease, seem to come in from the side, often with the greatest effects on young fish passing through the estuaries.

All of these issues are being studied by researchers in both the U.S. and Canada. In April, more than 30 researchers involved in the Salish Sea Marine Survival Project presented their findings during the three-day Salish Sea Ecosystem Conference in Seattle.

“When we started this project, we had very little information about what happens as the fish wander through the Puget Sound marine environment,” said Michael Schmidt, deputy director of Long Live the Kings and co-founder of the Salish Sea Marine Survival Project. “This project has really changed our knowledge of the problem.”

More than 80 studies have been launched, with more than 20 scientific articles published in peer-reviewed journals. Partners include some 60 federal, state, tribal, nonprofit, academic and private entities. In Canada, the project is coordinated by the Pacific Salmon Foundation, a nonprofit group headed by President and CEO Brian Riddell.

Bookends to Marine Survival
Most of the studies support the notion that the greatest mortality for salmon and steelhead occurs after the fish leave the streams but before they depart from the inland waters of the Salish Sea. That does not discount the importance of freshwater streams, where the fish hatch and spend at least the early part of their lives. Some will spend a year or more in freshwater before heading out to sea.

Whenever they enter saltwater, the condition and fitness they have achieved in freshwater no doubt plays an important role in their long-term survival, according to Beauchamp and others. The second challenge comes during the transition to the open waters of Puget Sound, followed by the ongoing challenge of finding food and avoiding predators in the open ocean.

Studies by Gregory T. Ruggerone of Natural Resources Consultants in Seattle and other researchers have raised the prospect that the North Pacific Ocean, where many of the fish end up, may be at or near carrying capacity for some species of salmon, with potential adverse effects on others.

Decreasing Number of Chinook
Thanks in part to large hatchery production, the total number of pink, chum and sockeye salmon in the North Pacific is now at a record high, based on reports dating back to 1925, according to an article by Gregory T. Ruggerone and James R. Irvine in the April 2018 issue of Marine and Coastal Fisheries journal. Nearly 70 percent of those are pinks. In contrast to the large numbers of pink salmon, Chinook, coho and steelhead together make up just 4 percent of the total salmon catch, Ruggerone and Irvine write.

The total number of pink, chum and sockeye averaged 721 million salmon per year for the period from 2005 to 2015, according to the report. That’s about 36 percent more salmon than during the previous peak in the late 1930s.

With ocean conditions favoring pink, chum and sockeye, the number of wild salmon of those species is higher than at any time since the early 1940s. Many of those salmon are coming back to near-pristine streams in Alaska and northern British Columbia, Ruggerone said. Together with near-record numbers of hatchery fish, all those salmon could be exhausting the available food supply, he said.

Prey Species Overlap
Pink salmon and Chinook salmon don’t normally eat the same thing, Ruggerone said, but during the second year of a pink salmon’s life, their prey species can overlap with those of Chinook. With both going after fish and squid, the competition could mean a shortage of food and lower survival for Chinook and other species in the North Pacific. Populations of wild Alaskan Chinook, for example, are at extremely low levels, even though their spawning habitat remains in good shape, he noted.

Furthermore, a new study based in Alaska’s Aleutian Islands reveals that certain plankton populations shift dramatically up and down on two-year cycles. Those cycles have been linked to heavy predation by large numbers of pink salmon, which grow to adult size and spawn in odd-numbered years. In even-numbered years, when the pink populations are low, an entirely different group of plankton tends to dominate.

Chinook salmon from the Salish Sea are believed to swim along the continental shelf with some reaching Alaskan waters, but nobody has studied how much effect large numbers of pink salmon are having on the survival of Puget Sound Chinook, Ruggerone said.

“Most scientists are focused on the early marine life stages,” he said, “but people shouldn’t lose sight of the ocean. A lot happens out in the ocean.”

View this article at: https://www.eopugetsound.org/magazine/ssec2018/marine-survival

Next Month:  Part 2
A look at what helps salmon grow and prepare for life in the open ocean.

This series was originally published in the Encyclopedia of Puget Sound at the University of Washington Puget Sound Institute. www.eopugetsound.org.