Yes, physicians are fallible. They are human, just like you and me. And the intense pressure of their profession often flaws and distracts their thinking despite their best efforts to be clinical.

In fact, half of all physicians are below average (and half are above average of course). Dr. Jan Poloniecki observed that “… even if all surgeons are equally good, half of them will have below average results; one will have the worst results and those results will be a long way below average,” according to the British Medical Journal.

So, is there a solution? Yes — one a 1,000 years old, and you won’t be surprised to know that medical technology has not kept up.

An early critique of statistical methods in medicine was published in 1835. Until recently, the process by which research results were incorporated in medical decisions was highly subjective. “Called ‘clinical judgment’ and ‘the art of medicine,’ the traditional approach to making decisions about individual patients depended on having each individual physician determine what research evidence, if any, to consider, and how to merge that evidence with personal beliefs and other factors,” said software developer Alejandro Harb in his November 2016 LinkedIn Pulse article, “The Subtle and Remarkable Power of Medical Algorithms.”

Four years ago, the U.S. edition of the British newspaper The Guardian warned,
“In the U.S, we know we will not have enough GP doctors in 15 years, as not enough are being trained. But algorithms can replace many of their tasks. Pharmacists are already seeing some of their prescribing tasks replaced by algorithms. Algorithms might actually start to create new, mundane jobs for humans. For example, algorithms will still need a human to collect blood and urine samples for them to analyze. ”How Algorithms Rule the World,” The Guardian, July 1, 2013

Al-go-rithms?
Algorithms have a long history, and the word can be traced back to the 9th century to Persian scientist, astronomer and mathematician Abdullah Muhammad bin Musa al-Khwarizmi, often cited as the Father of Algebra.

“Today, an algorithm is defined as a finite and organized set of instructions intended to provide the solution to a problem and which must satisfy certain conditions,” according to “A History of Algorithms: From the Pebble to the Microchip,” a 1999 Springer publication edited by Jean-Luc Chabert.

For computers, an algorithm is a sequence of coding instructions telling the computer what to do. By combining many such operations, the computer can carry out very elaborate chains of logical reasoning.

To visualize an algorithm, think of a common checklist or flowchart of numbered steps to greatly reduce the chance of mistakes. In his book “The Checklist Manifesto: How to Get Things Right,” Atul Gawande, physician and author, documented the powerful impact of a simple algorithm which prevented missing key steps in emergency room treatment. (Gawamde’s book was the topic of a Western Washington University end-of-life workshop Feb. 7, 2014.) 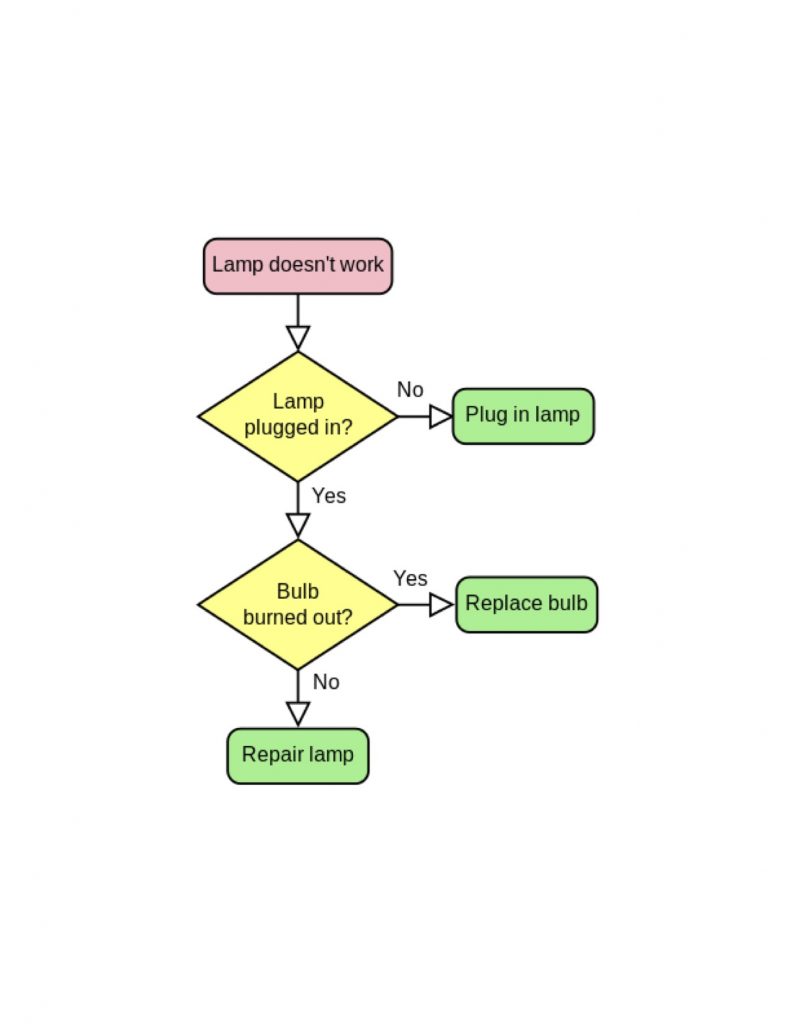 The above flowchart is a series of information boxes connected by lines and arrows.
This flowchart diagram represents an algorithm as a workflow or process, showing (in the case of healthcare) diagnostic steps and their order by connecting them with lines to treatments. The example illustrates a solution to a problem, and can be translated in, for example, treatment of a diseased gall bladder, cancer and any number of medical conditions.

Algorithms Quicken Help
An algorithm cast in mathematical terms and uploaded to a computer with access to a lot of data enables the computer to rapidly find and lay out the data in the boxes of the flowchart and show their connectivity, which points the reader (computer or human) to a solution. In the case of healthcare, the solution could be a quick, almost instant, diagnosis plus best treatment options from many expert sources. That could be the future. But today, multiple tests and endless consultations with doctors can take months for diagnosis and treatment recommendations.

Here’s the rub: the excellence of healthcare algorithms depends on whether enough healthcare data are available to compute. A large enough base of data algorithms could greatly improve healthcare diagnosis and treatment, customizable for every individual patient. If! As we’ll see in Part 2 of this article next month, that is the big question.

In statistics, the larger the sample of data, the better the result. That means the average result will be improved, and a below average quantity in the data sample will have a higher value than the average yielded by a smaller data sample. This is the Law of Large Numbers which, “… in statistics, is the theorem that, as the number of identically distributed, randomly generated variables increases, their sample mean (average) approaches their theoretical mean.” Swiss mathematician Jakob Bernoulli first proved the Law of Large Numbers in 1713, according to the Encyclopedia Britannica.

At least that’s how I interpret it as a non-mathematically trained person, so let’s get to what it means in healthcare to patients and physicians alike, the point of this essay.

Algorithms in Healthcare
Unfortunately, misunderstanding the role of algorithms in our lives can make algorithms as unpopular with the general public as gluten and GMOs. I’ve always resented algorithms and their cousins, especially when they are used by Amazon and other merchants to decide who I am, based on what I like in the way of books, music and movies. But I realize algorithms are simply tools, and disliking them is like disliking a hammer and blaming it on nails.

“The aversion to algorithms making decisions on what affects humans is rooted in the strong preference that many people have for the natural over the synthetic or artificial,” says physician Atul Gawande, in “A Checklist Manifesto: How To Get Things Right.”
Opposing the vain and Luddite side of me is the objective and inquisitive me, which convinced me to check out algorithms thoroughly before totally boycotting them.

In 1970, I worked as a technical writer for the mathematical programming firm of Bonner and Moore Associates in Houston, Texas. I was in the linear programming business of writing software for managing the operation and maintenance of process plants such as petroleum refineries. I was surrounded by mathematicians, programming geniuses and various specialists. I was writing about this staff’s consulting and software inventions for the technicians and managers who would use these mathematical tools.

Given such a background, I felt a duty to take algorithms seriously, especially since the science and technology of mathematical programming has had 45 years to improve and perfect itself. I was most optimistic about what they could do for reforming healthcare, to make it more efficient and accurate, so I read a lot of books.

Physicians Dislike Algorithms
We already live in an age of algorithms. Only a generation or two ago, mentioning the word algorithm would have drawn a blank from most people. Today, algorithms are in every nook and cranny of civilization, except everyday healthcare.

But proof of the utility of even the simplest algorithms abounds. An algorithm that is constructed on the back of an envelope is often good enough to compete with an optimally weighted formula, and certainly good enough to outdo expert judgment, according to Kahneman.

“A classic application of this approach is a simple algorithm that has saved the lives of hundreds of thousands of infants,” Kahneman wrote. “Obstetricians had always known that an infant who is not breathing normally within a few minutes of birth is at high risk of brain damage or death. Physicians and midwives used their clinical judgment to determine whether a baby was in distress. Different practitioners focused on different cues. Without standardized procedures, danger signs were often missed, and many newborn infants died.
“In 1953, an anesthesiologist was asked how to make a systematic assessment of newborns and she replied, ‘That’s easy. You would check heart rate, respiration, reflex, muscle tone and color scoring each 0, 1 and 2. Using this checklist to check babies one minute after birth lowered the mortality rate.’ The test is still in use.”

Doctors! Patients! Perhaps it’s time — way past time — to surrender our biases about algorithms, chase the Persians and make up for lost time by adopting them for healthcare as quickly as possible. With apologies to Stanley Kubrick and the cast of 1964’s “Dr. Strangelove or: How I Learned to Stop Worrying and Love the Bomb,” maybe it’s time we Learn to Stop Worrying and Love the Algorithm.