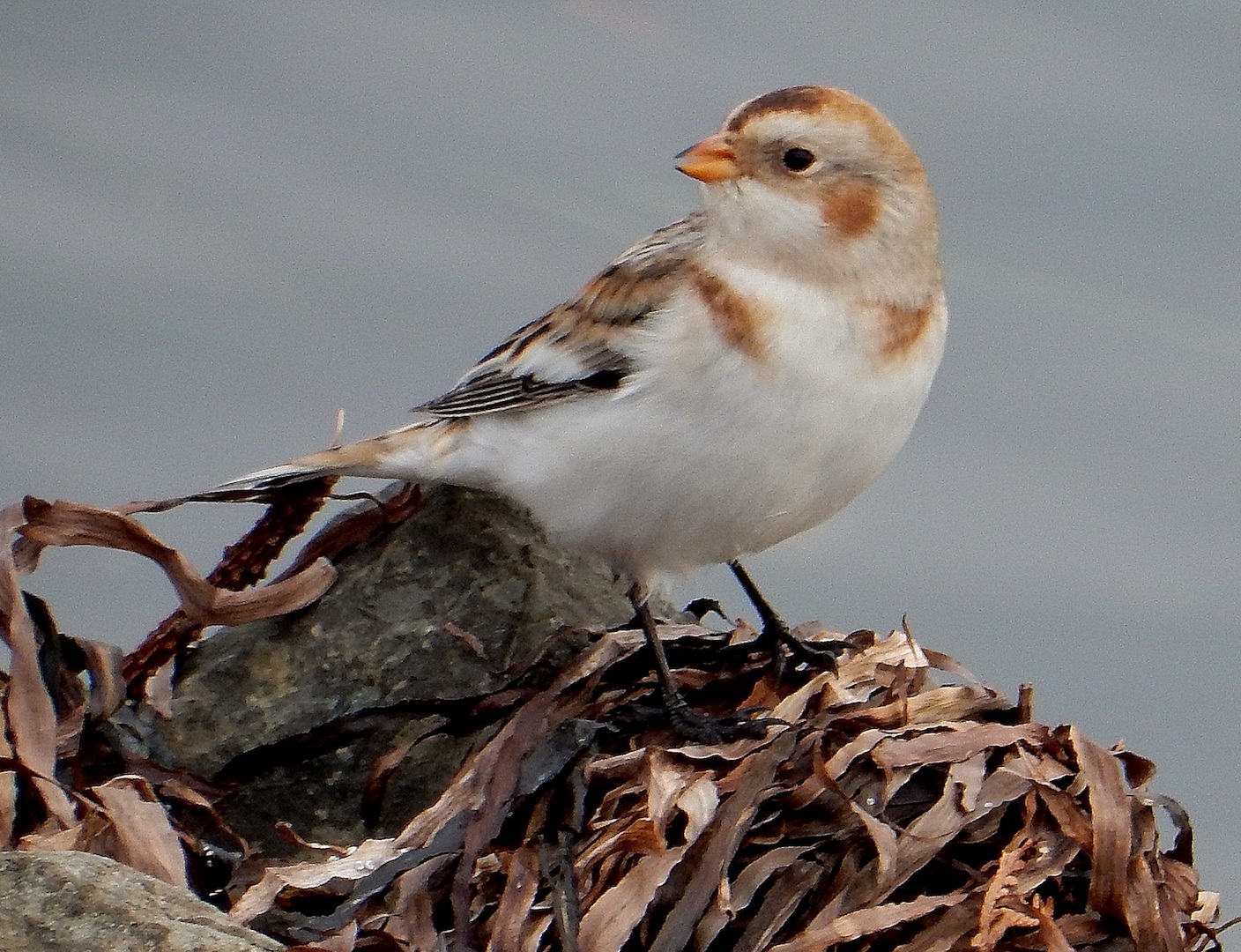 After what seemed like an abrupt transition from fall to winter, we suddenly find ourselves facing a few months of birding wearing multiple layers. Migratory birds have either passed through on the way to warmer climes or flown in to spend the winter with us. A significant snowfall in early November brought varied thrushes down from the mountains, along with an uncommon species for this side of the Cascades ­— a mountain chickadee. And then one of the most anticipated species of all, a snowy owl showed up at Sandy Point in early November.

Our moderate marine climate and rich estuarine habitats provide ideal conditions for many of the birds that breed farther north and add excitement to our winter outings. The biggest selling point to include Whatcom County in both the Important Bird Areas Program and the Great Washington State Birding Trail was the spectacular number of winter birds. Some of the waterfowl numbers from past surveys are a bit mind boggling. In fact, the overall total of birds in the county during the colder months is enough to warm a birdwatcher’s heart. The annual Christmas Bird Count, along with other studies that have been done over the years, bears out the acclaim that has come to western Whatcom County.

A systematic approach to the Peterson System of classifying birds points out the wealth of birds that we find here during the colder months. This system, which has been detailed here in a previous column, offers eight categories to assist in field identification. Peterson generally followed the guidelines established by the American Ornithologists’ Union (AOU). Since 1886 the AOU checklist has been the guide that everyone follows for everything about birds and their respective places in the overall pecking order. The taxonomic sequence established by the AOU is one of the most useful tools you’ll ever utilize when learning about birds.

All eight of the Peterson categories are represented locally and what better group of birds to start with than the most visible — the waterfowl. The greater family of waterfowl includes all of our ducks and geese, as well as bay and sea ducks. Lump these in with all the loons and grebes and you’re looking at the mother lode of winter birding in the Pacific Northwest. Freshwater waterfowl species are easily accessed as long as we don’t have a prolonged freeze that moves everything to salt water. In that case, the birds will always adapt, and the birders will follow the flocks.

The entire saltwater shoreline of Whatcom County is generally free of ice and is laced with numerous estuaries and pocket estuaries that provide essential food and protection from adverse weather for the dabbling ducks. The deep water diving species seem unaffected by a wider range of weather so they’re always easy to find. Agricultural fields throughout the county are good places to view both trumpeter and tundra swans, as well as the occasional flock of snow geese.

The Semiahmoo Spit is an ideal and highly accessible location to view the divers as they feed actively in the channel that separates the spit from the Blaine harbor area. This same channel is the passage for tidal flows into and out of Drayton Harbor, one of the premier sites for winter waterfowl. Loons, grebes, and long-tailed ducks are frequent visitors to the inner harbor. As winter progresses, Pacific black brant will begin to arrive at Semiahmoo and Birch Bay.

While many people turn up their noses when it comes to gulls, winter gulls provide a unique learning opportunity to those who take the time to study the flocks. Gulls in winter plumage are quite a bit different from those in breeding plumage and a four-year gull like the glaucous-winged encourages the observer to pay attention to details. Mew, ring-billed, and California gulls are also regular sightings in suitable habitats.

The beaches and breakwaters along county shorelines provide feeding and resting places for shorebirds that spend their winters here. Dunlin, sanderlings, and black turnstones are common throughout the winter. Black-bellied plovers are less common but the reliable killdeer is always around to add to your checklist. Immense flocks of dunlin, sometimes in excess of 10,000 individuals, provide a visual stimulant for birdwatchers.

The best viewing locations for shorebirds are areas that have extensive mud flats where they probe for worms and invertebrates with the changing tides. Some shorebirds prefer rocky shorelines where they mingle freely with the larger black oystercatchers.

Shorebirds play an important role in winter, for both birdwatchers and raptors like peregrine falcons, merlins, and Cooper’s hawks. Bald eagles become quite numerous in December as salmon ascend the Nooksack River and other tributaries to spawn. As the salmon runs come to an end, the eagles move down to the lowlands for the rest of the winter, joining red-tailed and rough-legged hawks and northern harrier in pursuit of prey. Some of the same habitats that support harriers are also suitable for short-eared owls, especially at dawn and dusk.

Passerine species have their own followers in the band of birders and provide entertaining identification challenges. Those species that might be in winter plumage are often accompanied by first year juveniles to further add to the challenge. A good case in point would be the white- and golden-crowned sparrows. Adults lack the distinctive coloration of the breeding season and frequently blend in with the juvenile. Chickadees, nuthatches, bushtits, song sparrows and spotted towhees are resident species throughout the county.

Within all of the eight categories, winter offers the unexpected when uncommon and even rare birds drop in for a visit. Among the most prized of these is the snowy owl along with the snow bunting, both of which have been observed at Sandy Point in November.

Large flocks of American wigeons always have potential for the occasional Eurasian wigeon. Experienced observers will scan entire flocks of Americans to check off one Eurasian. New birders are always eager to see their first long-tailed duck, an Arctic species that winters here.

From the Canadian border at Blaine to Larrabee State Park and right up to the foothills, numerous viewing locations are available and highly accessible to everyone. With shorter daylight hours, it’s wise to plan ahead on which of the locations you want to visit. And even though you’ve heard it more times than you can count, it is of utmost importance to prepare yourself and anyone else in your group for whatever the weather conditions might be. Winter is very unforgiving of even the slightest mistake in choosing the right clothing, especially footwear. Cold, wet feet will make you miserable and no fun to be around.