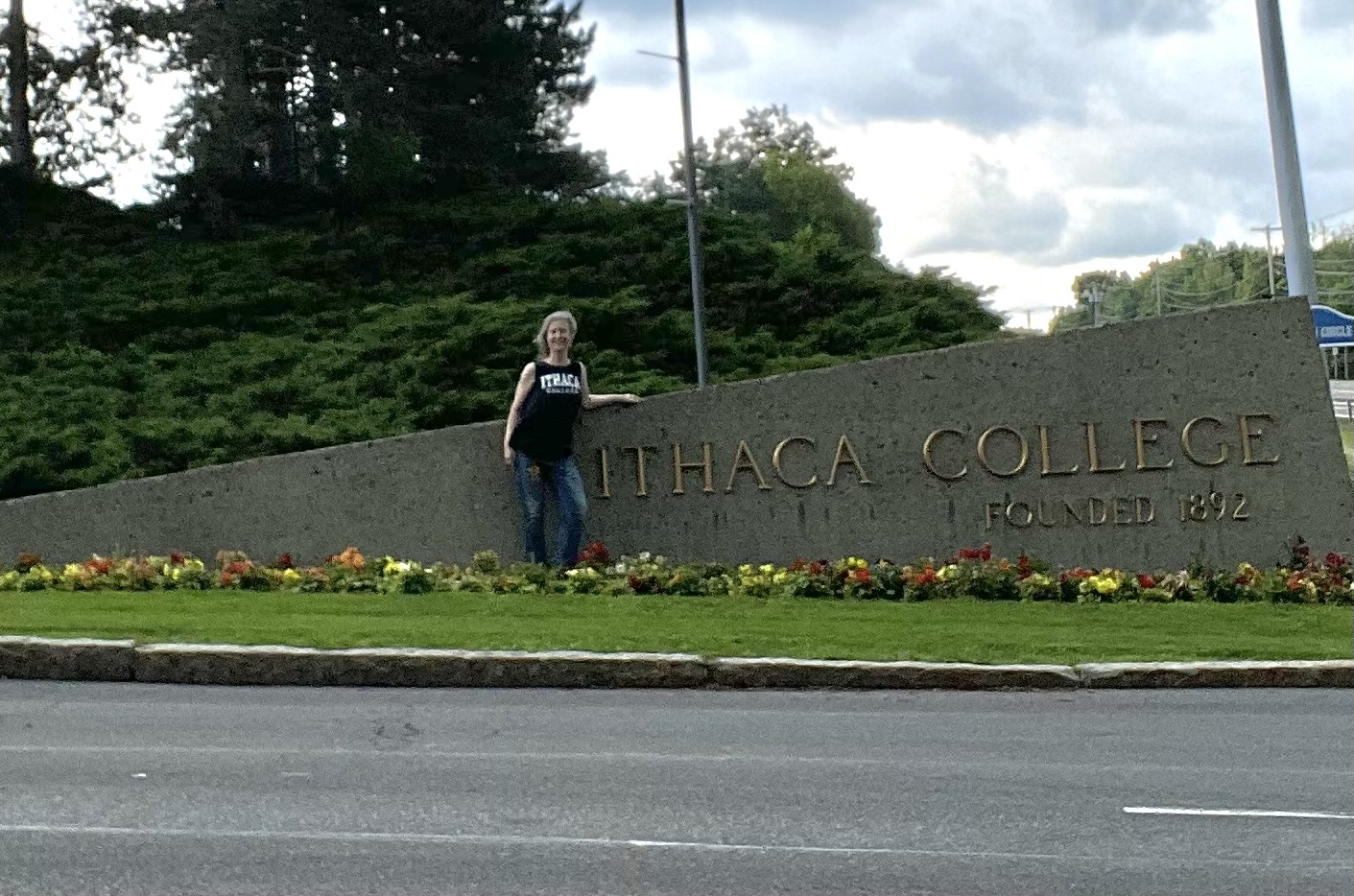 Jennifer Karchmer returned to Ithaca, New York to further her freedom of the press advocacy. Ithaca is a City of Asylum for journalists and writers in exile. Jennifer is a 1991 graduate of Ithaca College.
Photo courtesy: Jennifer Karchmer

Hello from Ithaca, New York. In May, I drove cross-country from Washington and landed in central New York’s Finger Lakes region. You may be wondering, why Ithaca? It’s my college town and I celebrate my 30-year college reunion this year. I am a member of the Ithaca College Alumni Board of Directors and recently have become very involved with my alma mater, so it’s sort of a coming home feeling. I mentor and support student journalists, from all colleges, with a soft spot in my heart for those attending IC. There are many other reasons for my 3,000-mile trek back to the East Coast, which I will touch on, but first some exciting news about Whatcom Watch.

The Society of Professional Journalists (SPJ) recognized a series of articles I wrote in 2020 for Whatcom Watch. I won SPJ’s Second Place for Column Writing Award in the Northwest Excellence in Journalism Contest. 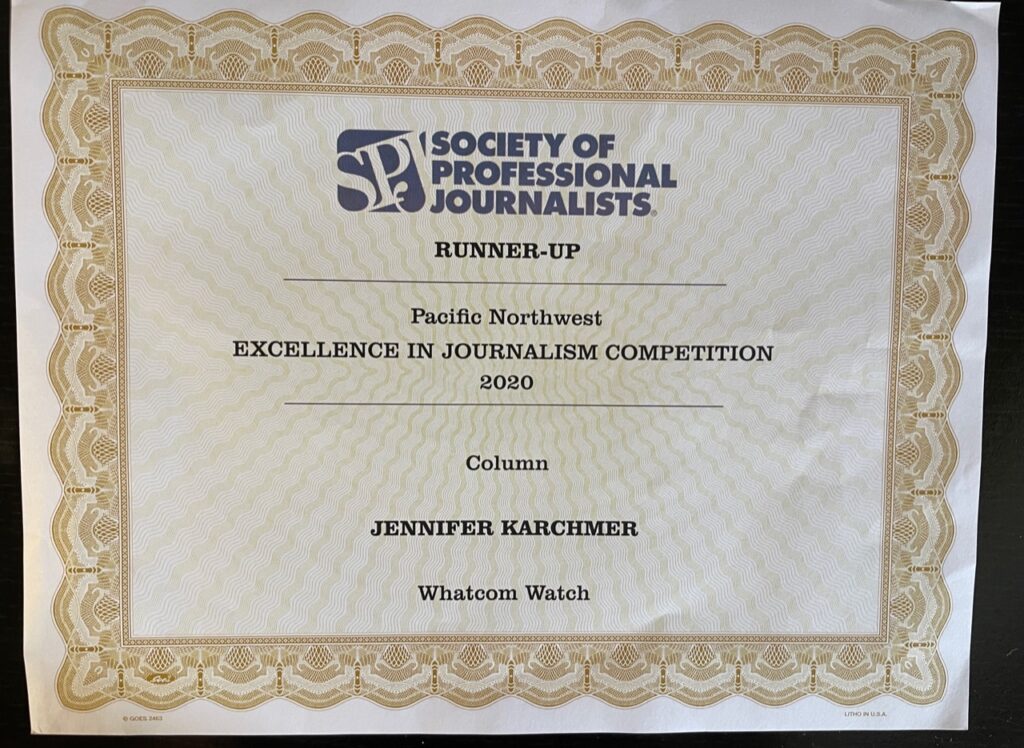 The three articles start with the one I wrote in the May 2020 edition about NPR affiliate KUOW’s decision to stop airing then-President Trump’s Covid-19 White House briefings. The station contended that it was best for its audience not to run Trump’s conferences live because they felt misinformation was getting through to the public.

The second article, which ran in the August 2020 edition, covered a major freedom of the press issue right here in our backyard — the subpoena fight between the Seattle Police Department and five Seattle news stations. The Seattle PD was trying to force the news outlets, which included The Seattle Times, to hand over video footage and photographs reporters took on May 30, 2020, in downtown Seattle amid the George Floyd demonstrations. King County Superior Court Judge Nelson Lee had initially sided with the police, but the news outlets appealed.

For the third article, which you recalI, I reported in the October/November 2020 issue of Whatcom Watch, the Seattle PD dropped the subpoena — a huge win for press freedom. I submitted those three articles to the contest, which recognizes the best in journalism from SPJ’s Region 10 (Washington, Oregon, Idaho, Montana and Alaska) so it’s a pretty competitive citation. It’s nice to see Whatcom Watch on the list of winners, which includes Crosscut, High Country News, the Yakima Herald-Republic, The Spokesman-Review, The Seattle Times, Kitsap Sun, KUOW, the Herald in Everett, InvestigateWest, among others.

Another Journalism Award
It’s not the first time Whatcom Watch has won a journalism award. Years ago, my Whatcom Watch article from 2012, “Take a Look At Iceland: Internet Freedom During Election Season” showcasing press freedom in Iceland, was awarded First Place in the Arts Reporting & Criticism Non-Daily Publication category. In January 2012, I had taken a break from teaching at Western Washington University to pursue a six-week self-funded research project studying freedom of the press in Reykjavik, the capital of Iceland (ironically, Bellingham was having a huge snowstorm that winter). I interviewed more than a dozen Icelandic print, TV and radio journalists with the hope of learning how journalism operates in what is deemed a “safe” place, unlike Syria, Cuba, Pakistan or China, countries that, at the time, were deemed dangerous for journalists.

For several years, Iceland has rated highly on the Reporters Without Borders Annual Press Freedom Index, so my question was, “What does Iceland’s relative freedom mean for the quality of journalism?” It had been a lifelong dream of mine to visit Iceland and I was accepted by the Icelandic media with open arms. I am in contact with many of those reporters still today. To further my research about press freedom, I spent three weeks in South Africa in 2015 as a guest editor with the Limpopo Mirror and the folks at Zoutnet News. These international trips studying press freedom have informed me deeply about how journalism works outside of the United States and have enriched my understanding and appreciation of our First Amendment and freedom of the press.

I’m grateful for these professional accolades from SPJ over the years and also very appreciative to you as editor, putting a keen eye up against my reporting, research and writing. Thank you to Whatcom Watch and the readers for supporting my work covering the journalism industry and press freedom.

On that front, I’ve reconnected with Ithaca, the small town in the center of New York state where I attended college in the late 1980s. I’m furthering my passion to assist journalists and writers in peril. Recently, I learned that Ithaca is one of just two American cities that has a City of Asylum chapter (Pittsburgh, Penn., is the other). Ithaca City of Asylum (ICOA) is part of ICORN, the International Cities of Refuge Network, promoting freedom of expression by finding shelter for journalists, writers, artists, musicians, and political cartoonists who have been threatened in their country for speaking out against authority and exposing corruption. In many cases, these artists and writers are forced to flee, after repeated physical threats and intimidation on themselves and their families. Where do they go?

Take Pakistani journalist Raza Rumi, for instance. His independent reporting had made him a target of violent extremists and he fled his home country to the United States after an assassination attempt in March 2014. ICOA hosted Rumi as a guest writer for two years, and, in 2018, he was named the director of the Ithaca College Park Center for Independent Media.

Interestingly, Rumi succeeds media pundit and journalist Jeff Cohen, the founding director of the Park Center for Independent Media. Some readers may recall that in 2007, while teaching communication at WWU, I had invited Cohen to Bellingham as a guest speaker, and, on May 1, he presented a lecture to a packed house at Fairhaven College’s auditorium. You can watch his lecture, and my two-minute introduction, on YouTube here: https://www.youtube.com/watch?v=AhORioe6UAA.

Metamorphosis
When I talk about my career in news, I like to say it’s a metamorphosis: I started as a reporter, developed into a journalist and today, I am a writer. Those may seem like the same things but for someone in the news profession, they all carry nuance.

During the early days, in the 1990s, I raced to breaking news, a five-alarm fire, a mayoral election or press conference, a steno pad in one hand and a camera slung around my neck. After years working in mainstream media — CNN, the Associated Press, McClatchy, Gannett, the New York Post, I developed my writing and interviewing skills, and more importantly, my appreciation for how the press works, the art of storytelling, being objective and getting all sides of story. Thirty years later, I call myself an independent, not just freelance, but independent journalist and press freedom has new meaning, as I learn of comrades around the globe being threatened, attacked and killed for doing their jobs. It’s my goal, if not responsibility, to stand up and defend fellow press, not just for reporters’ sakes, but for everyone’s freedom of speech and expression.

Not for a second do I take it for granted that I am enjoying writing to you now from my new office in the loft of my two-bedroom cottage in the rural outskirts of Tompkins County, New York, surrounded by rolling hills, farmland and bucolic countryside. As I mentioned, Rumi, the Pakistani writer, is safe here in the United States, but there are others, around the globe. The least I can do is assist a fellow writer from a faraway land who is under threat, being harassed or attacked for publishing his or her words.

Ithaca is now my safe haven.

Jennifer Karchmer is an independent journalist who covers reporter safety, press freedom and First Amendment news. A contributor to Whatcom Watch since 2007, Jennifer has also served as Editor in Chief. She monitors press freedom violations in the United States and internationally and has reported from Iceland, South Africa, Morocco and France. Jennifer is a 1991 graduate of Ithaca College’s Roy H. Park School of Communications.