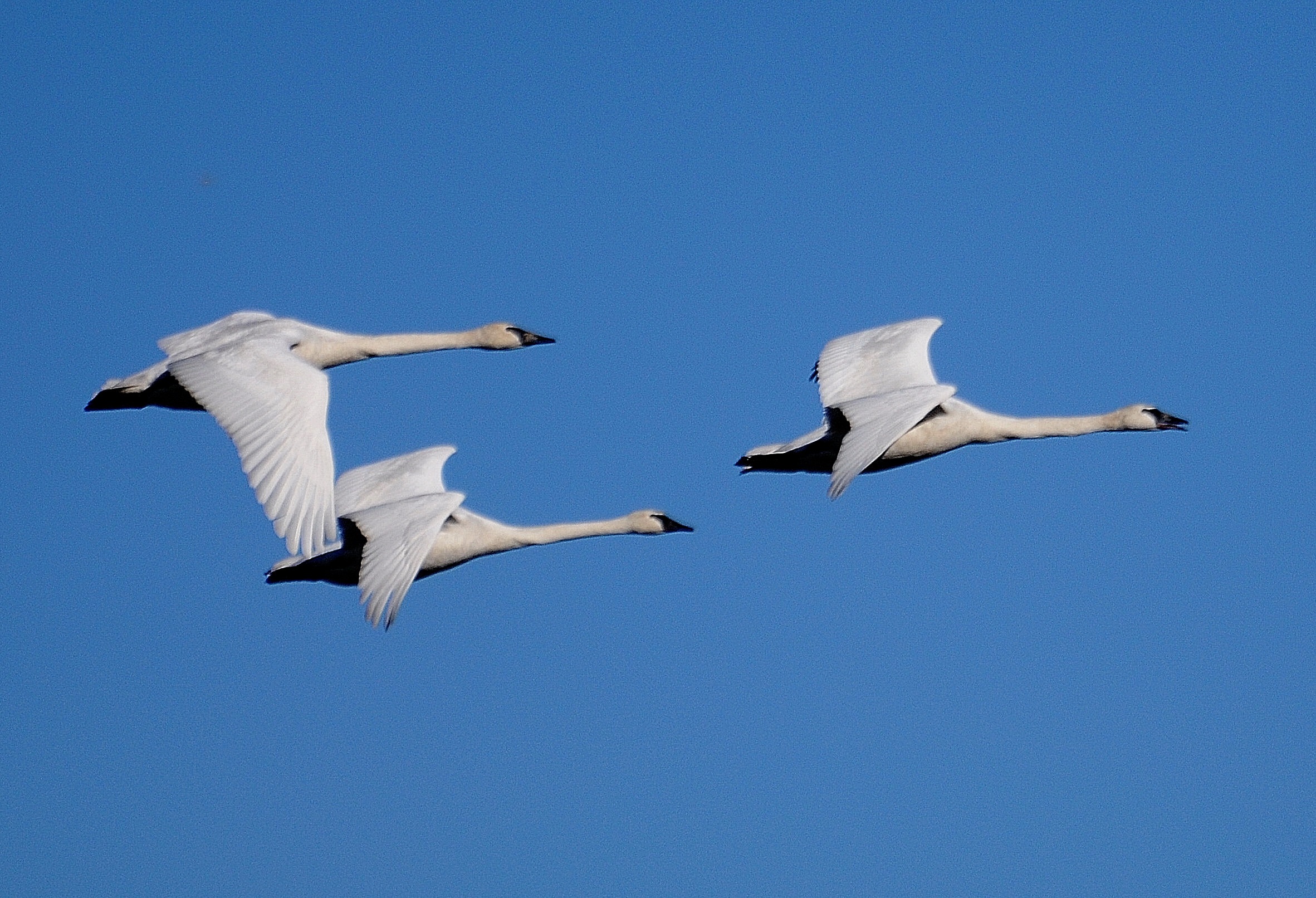 Looking back over past columns since 2002, it seems I’ve always been drawn to writing about waterfowl this time of year. I guess I shouldn’t be surprised, given the feelings I’ve harbored since growing up in the waterfowl-rich prairies of southwest Louisiana. From early childhood until I left home in my late teens, the sights and sounds of migratory waterfowl during fall and winter remain firmly etched in my mind. And, as fate would have it, for almost forty-three years I’ve lived in place that offers similar sights and sounds … and even more variety.

In our little corner of the Pacific Northwest we are graced with a variety of fresh and saltwater habitats and a moderate marine climate. These ingredients are complemented by abundant ice-free sources of food in protected lakes, ponds, bays, and inlets to attract numerous waterfowl species. Quite a few of the birds you see in winter are permanent residents. Others are the much-anticipated visitors that nest in the far north and spend their winters with us. An often overlooked factor for birdwatchers is the ease of accessibility to most of these species during their visit.

Swans were not a part of the waterfowl hordes that seemed to flood the rice fields that surrounded my hometown, but they’re part of the rich winter tapestry here. Of the two species that we see locally, the tundra is the most numerous and widespread swan in North America, while the trumpeter is more common here. Though less affected by human activity than the trumpeter swan, both have altered their feeding habits due to destruction of wetlands. They now rely on agricultural fields for their primary food sources. Both of our swans are protected species.

Stepping down in size from our largest waterfowl takes us into the sometimes controversial realm of geese. Whatcom County is well represented in this category. The greater white-fronted goose is an uncommon migrant but observers are reporting them mixed in with larger flocks of more common species. Snow goose numbers vary and most occur in the north county in the same fields where we find swans. Thousands of snow geese that breed in the Arctic have a winter range that extends along the Pacific Coast from the Fraser delta in BC to northern New Mexico. Their numbers are increasing to the point where they are out of control and considered by many to become a potential ecological disaster. Man-made ‘solutions’ might include increased hunting along the entire flyway.

The mallard-sized Pacific black brant is not only our smallest goose, but also our least resilient. They are a hardy species that breeds farther north than any other and migrates long distances over open expanses of ocean. Despite their stamina they are sensitive to destruction of foraging and resting habitats, which are cause for concern for this unique goose. A classic example close to home was the dredging at Semiahmoo Spit to create space for the marina. The gravel beaches and eelgrass beds were essential elements for wintering flocks. They continue to utilize the remaining beaches as well as those at Birch and Lummi Bays.

Whenever geese enter the conversation eyes roll and the focus shifts to the ubiquitous Canada goose. This goose is a perfect example of the resiliency of some species to adapt to manmade changes in the environment, as proven by the dramatic increase in population over the past few decades. In the late 60s, there were virtually no Canada geese on the Bellingham Christmas Bird Count (CBC). By 1992 the CBC numbers had increased to over 1,800. They breed locally in numerous locations and are common sightings throughout the year, and considered “pests” by many. They love our parks and golf courses and always leave their calling cards behind.

Ducks have always held a special appeal for me and it seems I’ve always had them close at hand. When I was growing up, several neighbors had ducks and my maternal grandparents had a veritable zoo of critters in a large fenced-in area behind their house. My grandfather created a small pond in one corner and told me that it was “for the ducks.” I spent a lot of time just sitting and watching as they seemed to be in their own little world when they were in the water. I still watch ducks in much the same way and find them to be endlessly entertaining.

Ducks are generally divided into two groups depending primarily on their chosen methods of feeding. The dabblers are those species that feed on the surface or tip their heads underwater to grab food that’s below the surface but within reach. Everyone’s familiar with the butts-in-the-air technique utilized by many dabblers. The other group includes the divers which have an entertainment value that is unique and delightful to observe.

Leading the list of dabblers is the inimitable Wood Duck, considered by many as one of the world’s most beautiful ducks. Fortunately for birdwatchers, we usually have these ducks around throughout the year and, as cavity nesters, wood ducks take well to man-made nesting boxes in suitable habitats. Of the three teal species that have been reported in the county, the green-winged teal is the only reliable sighting in winter and, like the blue-winged and cinnamon teal, they rarely breed locally.

Possibly the most common and recognizable of our ducks is the mallard. Every beginning birder learns about mallards before any other species and its size is often used to compare the size of other ducks. Mallards have been domesticated for many years and are known to provide us with interesting variations, frequently known as barnyard ducks. A case in point is the duck many of us know as “Blondie” in Whatcom Falls Park. She apparently breeds with wild mallards and produces a few offspring every year.

Two of our most numerous ducks in winter are the elegant northern pintail and the American wigeon. Concentrations of several thousand of these two species are not uncommon on Drayton Harbor. Observers should always scan flocks of wigeons to pick out the occasional Eurasian wigeon, which seems to be more frequent than ever. When you see a large flock of wigeons, utilize the old lesson of finding one thing that’s not like the others. Other species to look for, primarily in freshwater habitats, are northern shoveler, gadwall, canvasback, redhead, and ring-necked duck.

Sea and bay ducks were not common to me in south Louisiana, given that I grew up inland surrounded by fresh water habitats. Needless to say, I’m in waterfowl heaven here with the wealth of wintering waterfowl that frequent saltwater shorelines. Again, the accessibility factor is a key ingredient for birders since all of the habitats frequented by many of these species are easy to get to and most are on public property. From Blaine and Semiahmoo to Larrabee State Park, the birds are waiting.

The one place I always recommend for birders wishing to spend time with good birds is one of the premier sites for wintering birding in the Pacific Northwest … the Semiahmoo Spit. If you’re on foot or a bicycle and even in a wheelchair, this natural sand spit is an ideal place to hone your field identification skills while enjoying the scenic vistas of the North Cascades and the British Columbia Coastal Range. I’ve been a Semiahmoo regular for over forty years and I still look forward to my next trip. Despite the glut of development on the spit, the surrounding waters are still appealing to wintering birds.

From numerous locations along the spit, you can spend time with two of the most sought-after species, the spectacular harlequin duck and the Arctic breeding long-tailed duck. Common and Barrow’s goldeneye, red-breasted mergansers, three species of scoter, ruddy ducks, and the diminutive bufflehead offer a veritable who’s who of waterfowl throughout the winter. When spring arrives, most of these species will return to their respective breeding grounds so pack a lunch, dress for the winter weather, and spend the day at the Moo. Get to know our waterfowl over the winter months and you might get hooked, too.
_______________________________