Two national newspapers sounded alarms in early November. The Washington Post ran a story about a South Dakota farmer who committed suicide because he was going broke, and The New York Times published an op-ed on how scientists got climate change all wrong — they grossly underestimated its speed and severity. These topics seem unrelated at first glance, but they both speak to a Whatcom problem — how can our farms and our farmers survive and thrive in the next few decades, as our climate gets warmer, our summers drier, our winters soggier, and our snowpack smaller?

Agriculture is an important part of Whatcom County economy, society, and culture. It’s a fact of our county politics that urbanites from Bellingham and rural people from the north county are often at odds over a variety of issues, including environmental ones. But, we are all in this together, and, in that spirit, the Whatcom County Climate Impact Advisory Committee asked me to compile the Agriculture and Food Security section of the Committee’s Community Research Project. 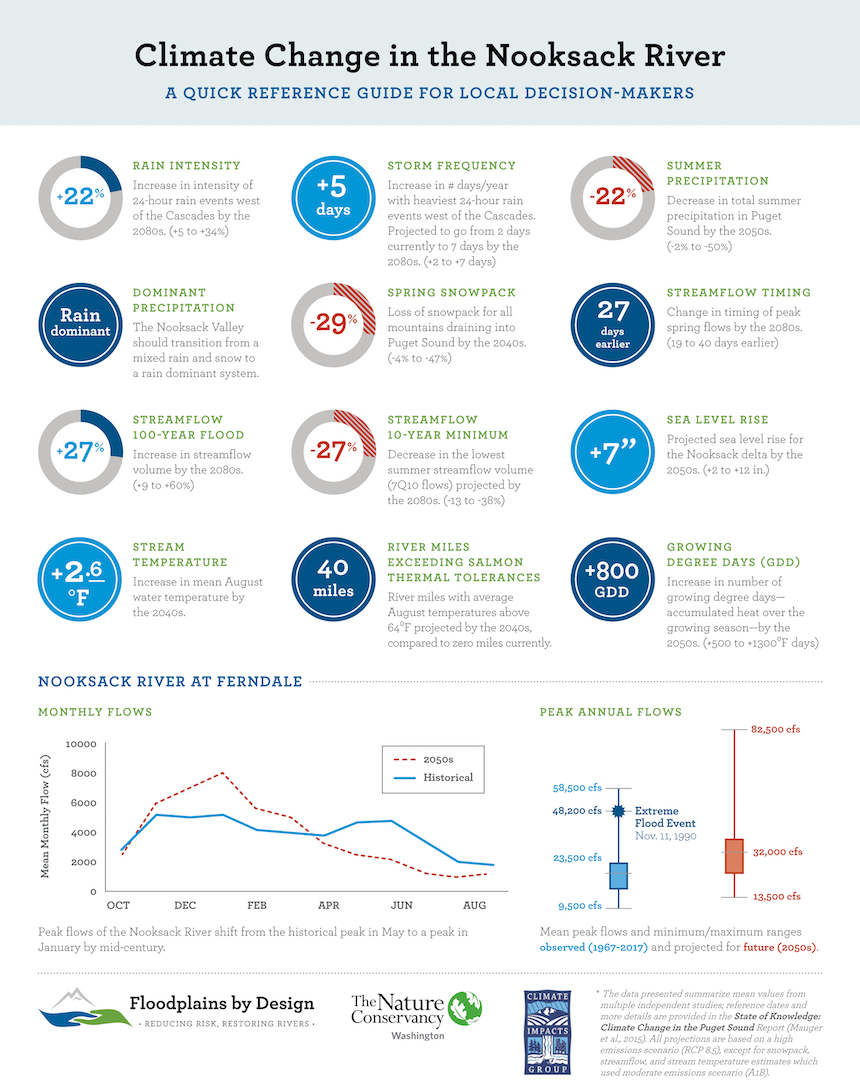 I interviewed over 20 farmers, fishers, and scientists, some of them old friends and some new acquaintances, and learned a huge amount — you can read my full summary in the project and even access edited summaries of all the interviews in the Project Appendices. In a subsequent post, I hope to address issues of concern to tribal and non-tribal fishers and how they can react to climate threats. For now, let’s talk about farms. What will happen to them and how can farmers, in a Serenity Prayer kind of way, hope to mitigate the changes they can mitigate and adapt to those they can’t? If we want to know how to act on agriculture and climate change, it’s important to know what Whatcom County agriculture is and isn’t. Here are some quick facts:

The USDA Census of Agriculture counted 1,712 farms in Whatcom County in 2017, operating about 102,000 acres (that’s about 160 square miles) of farmland, about three-quarters of it in crops.

Our farms generate over a third of a billion dollars of value, $218 million from animal agriculture (mostly dairies) and $154 million from crops (mostly berries). Almost all of our farms are family owned, many of them passed down for three or four generations, some of them small, innovative start-ups.

Farms have gotten bigger in the past half-century: there were about 800 dairy farms in the county in 1960, and now there are about 95, but there are the same number of cows.

Crop farming used to be more diverse than it is now: local farmers grew peas and carrots, for example, and other kinds of vegetables, but now raspberries, blueberries, seed potatoes, and dairy forages are the primary crops. As a contrast, Skagit County, which has slightly less farmland than we do, has a much greater variety.

Concentration on a few crops, dependence on irrigation, high costs of farming, a strict regulatory environment, and a broken system of water rights all render farms vulnerable to climate change. The challenges begin with water. As our climate warms, more of our winter precipitation will fall as rain, and less as snow. This means less snowpack runoff in spring and early summer, so there will be less water available for irrigation in summer months. It also means that flood danger in the winter will increase. At the same time, if, as predicted, our summers are going to get drier, farmers will need to irrigate more, but there will be less water available, and there will inevitably be more competition from growing towns in the north county and from the need for fish passage on our rivers and streams, which is crucial to our tribal and non-tribal fishing communities.

System of Water Rights Is Broken
Facing this potential water crisis, the system of water rights in Western Washington is completely broken. It has been estimated that up to half of the irrigation in Whatcom County is done without legal rights, and the state Department of Ecology, admittedly very busy with other things, is doing nothing to rectify the situation — applications for water rights filed in the 90s have still not been acted on. Innovative ideas like metering water use, water banking, and water spreading have been topics of discussion in the farming community for years, but there has been no agreement on what can work legally, ecologically and economically, so they have not been tried (a future Whatcom Watch article will explain water issues and climate change more fully).

Water is not the only thing. Warmer temperatures will make the county friendlier to new organisms, and this is both bad and good. On the bad side, plant pests may increase; already several pests, including the Drosophila suzukii spotted-winged fruit fly, the Botrytis gray mold, and the Monilinia mummy berry, have affected our berry and grape crops. Animal diseases, such as pigeon fever, which has recently begun to infect horses in the county, may spread to dairy and beef cattle, which would be a disaster.

On the positive side, warmer temperatures may mean we can grow a greater diversity of crops and have a longer growing season in spring and fall. Already, varieties of wine grapes that used to have to be imported from Eastern Washington now flourish here. But since all our major commodity crops are perennials, new crops take time to produce — so, unlike Midwestern farmers who can switch from corn to wheat to soybeans from year to year, Whatcom farmers need to plan ahead and invest and may not see any income from a new crop or new variety for several years.

Human Health Hazards
There are also human health hazards. Although our relatively mild climate protects farm workers from the worst effects of working long hours in the sun (unlike their counterparts in Texas or California, for example), this may change if temperatures rise too much. More immediately, there are the fires. Bellinghamsters may complain (rightly so) about the health effects of smoke from BC fires in 2017 and 2018, but they didn’t have to do manual labor out there in the smoke for hours at a time. This could get worse if we have more drought- and fire-plagued summers.

Sea levels are now predicted to rise more than scientists previously thought, and the most immediate effects will be on our tribal and non-tribal fishers, but they may also affect agriculture: a two-to-three-foot rise could inundate as much as 5,000 acres, much of it cropland, in the Ferndale area.

Finally, there are the economic effects. Since most of our crops are commodities shipped outside the county, changes in the economies of regions or countries where we sell our products may have unpredictable effects on our farmers’ abilities to sell their milk or their berries. And even more predictably, our tradition of family-owned farms may be at risk. If the corporate giants who own most of California’s farms begin to see that it’s just getting too damn hot there, they may look at Western Oregon and Washington as profitable fields for shifting their investment. As The Seattle Times has recently pointed out, Wall Street investors are already buying water rights in other parts of Washington. How will our multigenerational family farms or our diverse agroecological startups compete with the capital that these agribusiness firms can bring to our region? We simply don’t know.

A strong sense of stewardship of the land, the high cost of farming in a populated region, and the strict regulations in place here, all mean that farmers have already done much of what they could to mitigate the effects of a changing climate — they use water efficiently, dispose of nutrients (that’s cow poop in plain language) responsibly, and some of them implement greenhouse gas-reducing technologies. The five anaerobic digesters in the county, beginning with the Vander Haak Dairy in 2005, convert the methane from manure and food-processing waste to electricity. The innovative three-stage system built by Regenis, a subsidiary of locally-owned Andgar, at Coldstream Farm LLC in Deming, both reduces needed storage capacity for manure and processes the remaining liquids to yield clean water that can now be emptied back into the Nooksack. Farmers also continue to upgrade the efficiency of their irrigation systems.

Practical Suggestions
But there is more that all of us could do; here are some practical suggestions:

Rationalize water rights. Make it possible for farmers to adopt creative solutions that not only reduce demand but also make sense economically. This probably begins with eliminating the “use it or lose it” provision that forces farmers to guard their rights jealously, and prevents many of them from supporting a metering system that would lead to greater efficiency. Also allow rights assigned to one parcel to be used on adjacent parcels, if use does not exceed the amount of the right. And explore more comprehensive solutions like a water bank that would allow farmers who have rights to more than they currently use to lease or trade their rights with farmers who need more water.

Explore ways to diversify our agriculture. Berries and milk make the most economic sense right now (though Trump tariffs are hurting dairy farmers), but they leave farmers much more vulnerable to the expected and unexpected results of a changing climate. What other crops could grow profitably here? How could we make it easier for small-scale, diverse and innovative farms to get access to land and markets? Where are prospective local markets? Diversification would not only reduce vulnerability; if there were local markets, this could reduce the greenhouse-gas emissions from transport agricultural products. The Food System Committee is now conducting a Community Research Project similar to ours, and we can expect more detailed recommendations from them.

Continue to encourage and support scientific and economic research. Current collaborations such as the Raspberry Research Program funded by farmers and carried out by WSU extension, and the Food Lab teaching and research kitchen at the County Fairgrounds in Lynden provide great examples. Even in areas where farmers may not be able to invest, researchers from WSU, WWU, USDA, and other agencies can anticipate ways to develop crops that are suited to warmer weather and drier summers.

Educate the public, particularly the urban public, about the challenges that the agricultural community faces. Bring urban environmentalists together with farmers so they can both realize their common ground. Local nonprofits such as Sustainable Connections have made great progress in this direction, but we need more.

Stevan Harrell retired in 2017 after 43 years at the University of Washington, teaching anthropology, environmental studies, and Chinese studies. He and his wife Barbara moved to Bellingham and are now happy ‘Hamsters. Steve hopes to continue writing about local environmental issues.