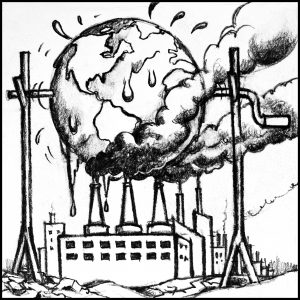 The city of Bellingham’s Climate Action Plan Task Force continues to barrel forward. Their monthly meetings typically include presentations on topics that pertain to lowering carbon emissions and updates from the task force’s work groups. Dear reader, please know that my articles touch on only a portion of the interesting information covered at these meetings. To know more, go to the city’s Climate Action Plan Task Force webpage where these presentations’ power point slides and videos are all posted: https://www.cob.org/gov/public/bc/climate.

This article covers both the monthly task force meetings and the actions the city has taken to reduce carbon emissions.

March 6 Meeting
The March 6 meeting focused on the transportation (1) and buildings (2) sectors, the two biggest emitters of greenhouse gases. Together they add up to almost 70 percent of all carbon emissions. Three presentations were made, two of them by city of Bellingham staff.

Kurt Nabbefeld, development services manager in the city’s Planning and Community Development Department, discussed the updates the city is making to their energy codes and the policy framework the city uses for land use and building decisions. He also provided fascinating information about the city’s seven urban villages (UVs). These high-density zones or areas of town are designed to include housing, employment and services. They will lower the need for transportation and are expected to absorb over 30 percent of the city’s future growth.

Next, Chris Comeau, transportation planner for Bellingham’s Public Works Department, covered the current status of the city’s multimodal approach to transportation planning. Bellingham’s long-term goal is to shift us away from single-occupancy vehicles. Towards that end, it has adopted three master plans: bicycle, pedestrian, and greenways. The goal is to make it as easy and enticing as possible for us citizens to walk and bike instead of drive. Mr. Comeau’s slides display a veritable spider’s web of interconnecting bike and pedestrian paths planned or already completed throughout the city.

One of Mr. Comeau’s points was interesting to me as a grandmother. They’ve been studying factors that affect transportation choice; personal safety turns out to be a big issue in dissuading people from switching to an alternative to cars. As one example, most parents do not permit their children to ride bikes or take the city bus to school due to safety concerns that are unsupported by reality.

My granddaughter is among a handful of kids who rides a bike to her school. Typically, hers is the only bike in the school’s bike rack. On those days when I do pick her up, I encounter the usual long line of parents waiting in their cars to retrieve their children. I am reluctant to raise the most time-worn of “back in my day” stories, but it is true that, for those of us of a certain age, being driven to and from school was unheard of both for us and, years later, for our children.

The third presenter was Amanda Sargent of Cascade Natural Gas (CNG), who gave an overview of the efficiency planning CNG is currently conducting. She also discussed their incentive programs. Some of their incentives can cover 50 percent of the cost of a project; they aim for 100 percent cost coverage in low-income households. I found myself musing, as she spoke, about the irony of these incentives. While they indeed provide rewards for energy efficiency, they also reinforce our use of fossil fuels rather than renewables.

April 10 Meeting
The city’s April 10 Climate Action Plan Task Force meeting was equally interesting. It was, as usual, a full house, with every chair in the mayor’s board room taken. The meeting began with a slide show on U.S. cities that have achieved 100 percent renewable energy, followed by a presentation on the inventory of Bellingham’s buildings conducted by Erin McDade of Architecture 2030. Ms. McDade is also a task force member.

City staff members Mark Gardner and Clare Fogelsong gave a slide presentation on seven U.S. cities that have achieved 100 percent renewable energy for their electrical supply. Their populations range from 1,318 (Rock Port, Mo.) to 103,000 (Georgetown, Texas). Note these two cities are not in blue states; indeed, four of these seven cities are in red states.

Two additional cities were discussed (Boulder, Colo., and Salt Lake City, Utah) as they have particularly robust policies and are doing innovative things to achieve their goals. What sets Bellingham apart is that we are shooting for being entirely carbon-free, not just in our energy supply, by 2035. As far as we can tell, we are setting the highest bar in the country. Again, you will find these slides on the city’s Climate Action Plan Task Force website.

Next, the Task Force’s Erin McDade made a fascinating presentation on the comprehensive analysis her organization, Architecture 2030, conducted on Bellingham’s building stock. This nonprofit is working with 13 cities in North America — Bellingham among them — to reduce building emissions via their Zero Cities Project. Architecture 2030’s stated mission is “… to rapidly transform the global built environment from the major contributor of greenhouse gas (GHG) emissions to a central part of the solution to the climate crisis.” (3)

Ms. McDade discussed how we can get to net-zero emissions both for new construction and with our current building stock. We will need to transition to adopting a carbon-free grid, zero net carbon policies in our new construction projects, and all-electric big buildings. This combination will reduce our carbon emissions by 72 percent.

What about the rest? If we add electrifying all single family homes, we achieve a 94 percent reduction. Currently, our city’s electricity supply is a carbon-intensive 50-60 percent mix of fossil fuels. This ratio is expected to come down as we move into compliance with the state’s passage of the 100 Percent Clean Energy Bill (SB 5116), which sets the timeline for achieving 100 percent renewable power by 2045.

In sum, we will achieve net zero through a combination of bringing down carbon emissions primarily in the building and transportation sectors through conservation and conversion to electric, and adding renewable energy sources such as solar and wind. Ms. McDade recommended that all new buildings should be built using zero-carbon construction methods and materials from here on out. “We don’t have a choice but to do something that is hard,” she added.

That’s the science on how to get from here to carbon-free. The good news is, the science of how to do this is already known. It can be done. Indeed, it is already being done elsewhere. Our biggest challenge is not the science; it’s the psychology. It’s getting the public — us — on board. It will cost money, and, more importantly, it will require shifts in the way we do things. While we citizens ponder this reality, know that the city is also thinking about how to strike the right balance between reducing GHGs and avoiding a public backlash. Soon we will need to start a community conversation about how to move forward together.

City Council Update
On April 22, Clare Fogelsong updated the City Council on the progress of the Climate Action Plan Task Force. I provide, below, a few among their many accomplishments to date. To learn more, watch Mr. Fogelsong’s presentation here: https://meetings.cob.org/Meetings/ViewMeeting?id=1986&doctype=2 (starts at 15:52).

• The city’s fleet has grown to 25 hybrids and EVs (electric vehicles);

• They co-sponsored the new fast charging station at Whole Foods;

• There are now 20 new projects in the permitting/construction process in the city’s urban villages (UVs), adding another 1,236 units to the existing 1,515 units;

• City facilities and streetlights are being converted to LED. To date, the city has reduced emissions by 136 metric tons of CO2;

• Solar panels have been placed on the water reservoir tanks at the water treatment plant;

• The city is developing a community outreach program to communicate their progress in implementing its Climate Action Plan to the citizenry.

Betsy Gross is a retired mental health professional. In 2003, she retired from the County of San Diego and moved to Bellingham with her family. She is a grandmother, outdoor enthusiast, and political activist. She has devoted her time to several local causes over the years, primarily to environmental activism.