Fall has arrived in the Pacific Northwest, and many people turn their attentions to searching for certain species of mushrooms that show up this time of year in our woods, fields and gardens. Mushrooms are just the visible indication “fruiting” from an invisible network (mycelium) of tiny filaments (hyphae) that make up the true fungal bodies that interact with their environment. The increase in moisture and decrease in temperature are two factors which tell these mycelia to produce their “fruiting bodies.”

A while ago (October/November 2019 issue of Whatcom Watch), I discussed the life and biology of one of these mushrooms, the fuzzy foot, aka Collybiopisis peronata (at the time I called it Marasmiellus peronatus, but it has just had another scientific name change — hopefully to its final, secure name). You can go read that article online to learn more about mycelia and how mushrooms get their names (http://whatcomwatch.org/index.php/article/bitter-invader/). Collybiopsis is a mushroom species that decomposes plant litter. This role is an important one for about half the mushrooms.

Today, I want to talk about the other major role that mushroom-producing fungi play, arguably even more important. This is as one of the partners with plant roots in a relationship called a mycorrhiza. The term mycorrhiza (plural mycorrhizae) literally means “fungus root.” This role is extremely important ecologically and extremely common. Some 95 percent of all plants form mycorrhizae with plants and some evolutionary biologists have said that the plants would not have moved onto land without the help of their fungal partners. Most plants form mycorrhizae with non-mushroom-producing fungi, but, among the mushroom producers, there are a great variety of different kinds. Many highly desirable edible mushrooms have mycelia that form mycorrhizae with local trees.

One group of such mushrooms, relatively easy to recognize, are members of the genus Russula and the genus Lactarius. Both these have an unusual texture (for mushrooms). When the mushrooms are fresh, their flesh brakes cleanly like a piece of chalk. Both have relatively light-colored spores, from pure white to light ochre. Lactarius species bleed a milky substance when broken or cut, while Russula species lack milk. There are many species in each genus and many are quite difficult to determine with certainty. Well over 100 species are known from the Pacific Northwest and many new species are currently being discovered and given new names. Only a few are edible and some are poisonous.

Edible Species
One good edible species of Russula is relatively easy to recognize: the shrimp mushroom, Russula xerampelina (Figure 1). It has several color versions (which may be different species), but its typical form is with a purple-to-red cap and white stipe (stem) that bruises brown and often has a pink blush on it. The gills are light ochre yellow (from the spores). When wet, R. xerampelina‘s cap is quite slimy (viscid). 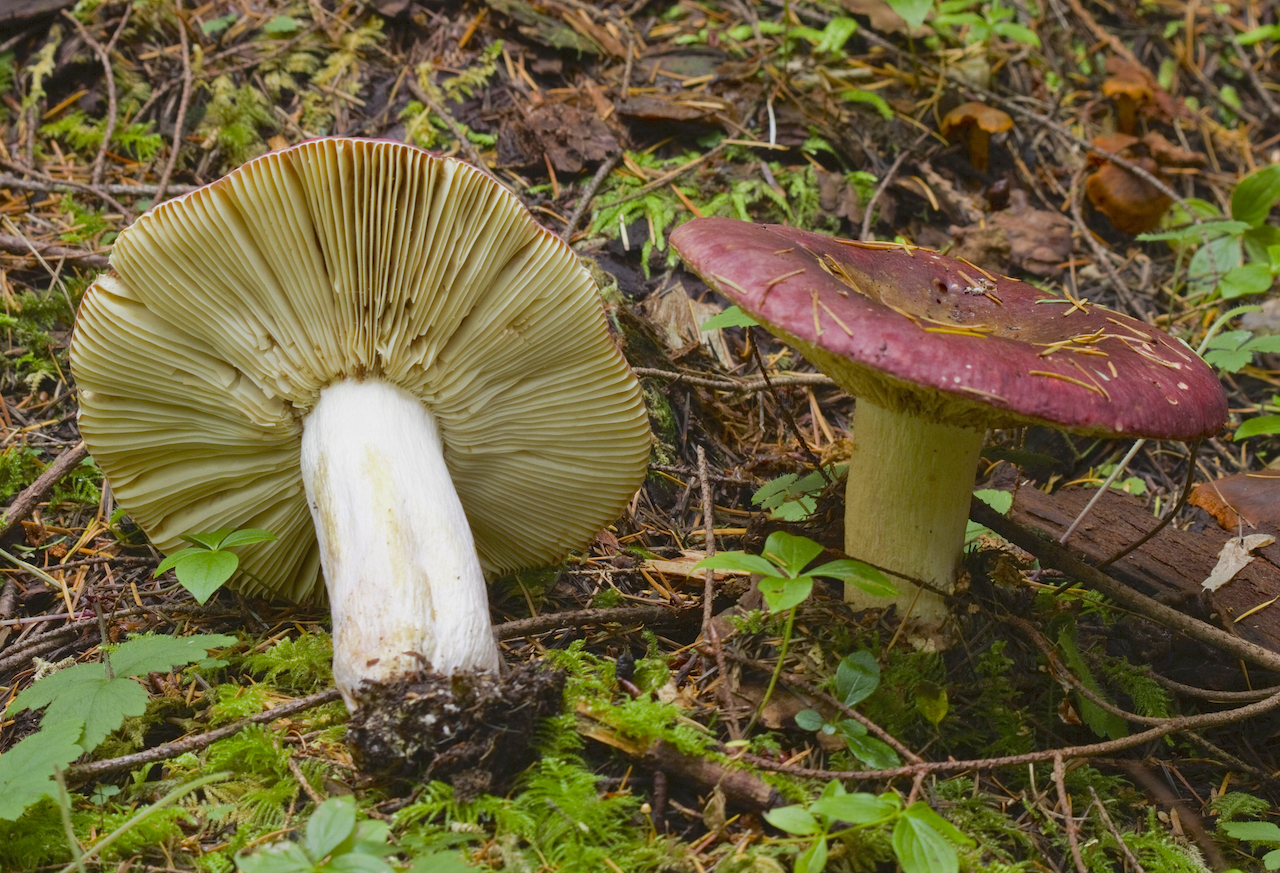 A most distinctive feature of this species is the slight odor of shellfish that is noticeable as the mushroom dries. This is a relatively large mushroom (up to 6 inches across the cap) in comparison to many other Russulas that rarely reach 3 inches across. R. xerampelina has a nutty flavor and crisp texture and this texture holds onto butter well.

Russulas are mycorrhizal with many different trees, but R. xerampelina is restricted to conifers and it is particularly common in second-growth western hemlock and Douglas fir forests. If one digs around in the duff under these mushrooms, one can often find the mycorrhizae formed by them. Refer to Figure 2 for the following discussion of how mycorrhizae of this group are constructed.

The left photo is of dug-up and washed Russula mycorrhizae. These are the fleshy, coral-like growths attached to the hemlock root in the background. If you cut a thin section of one of the coralloid branches and look at it under a microscope, you will see the center image (100 µm = 1/10 mm). The left-most part of this figure is seen at higher magnification at the right. In that image, M is the outer mushroom fungal coating (mantle) composed of a dense tangle of hyphae (H). The dark layer is the outer part of the plant root tissue and the open cells to the right are plant cortex cells (C). The areas labelled HN1 and HH2 (region called the Hartig net after an early German forester who first described this region) are the network of fungal hyphae that surround each cortex cell. This is the location in the mycorrhiza where the transfers of plant and fungal nutrients take place.

There are benefits to both partners in the relationship. Rather than decomposing dead plant matter to get their energy, the mycelia of these fungi provide a fine “root” extension that can obtain water and minerals much more efficiently than the plant’s roots can themselves. In exchange, the plant partner provides its mushroom with energy-providing carbohydrates. The sensitive, feeding areas of roots also get some protection from pests and diseases by the coatings of the mycorrhizal fungus.

Mycorrhizal relationships can be broad or very specific. Some mushroom fungi form mycorrhizae with a variety of plants and can thus link these plants together. Others can be very specific — one fungal species with one tree species, for instance. But even in this case, one mushroom mycelium can link several trees together. A given tree can usually form mycorrhizae with several different species of mushrooms. The plant-specific nature of these relationships can make searching for certain mushrooms much easier because to find them you need only look in woods that contain those trees. In the remainder of this article, I’ll describe a few of the other important mycorrhizal species of mushrooms that are excellent edibles.

True Chanterelles
The true chanterelles (genus Cantharellus) are highly desirable edible mushrooms. Some can be found as early as July in rain-soaked mountain woods, but mostly they are sought after just as the rains start in the fall. And they will continue to come up in cycles following repeated dry and wet periods from September through October and even into November. We used to think there was only one golden chanterelle in the Northwest and gave it the European name, Cantharellus cibarius. It is now known that there are three such species and that C. cibarius does not occur here. Figure 3 shows these three along with the white chanterelle.

All chanterelles are stocky mushrooms with dense flesh and a vaguely fruity odor that some say is like apricots. Rather than true gills, these mushrooms have blunt ridges on the undersides. They are delicious sautéed in butter and incorporated into sauces, stuffings or mixed with other foods. The best way to preserve chanterelles is by sautéing slices first in oil or butter and then freezing the result.

It is difficult to see the subtle color differences in the black and white images in Figure 3, but here are some clues to help identify these species. Cantharellus formosus, the Pacific golden chanterelle, is probably the most common species. It is mycorrhizal with a variety of conifers, but is most often found in lower elevation, second-growth Douglas fir forests. It is a uniform deep orange-yellow and tends to have thicker caps than the other golden chanterelles and evenly thick stipes. Cantharellus cascadensis, the Cascade golden chanterelle, tends to be lighter in color, particularly the stipe and undersurface of the cap, with the cap edge quite narrow and the stipe usually broadest at the base. It has a slightly higher distribution than C. formosus, but is also mycorrhizal with a range of conifers.

Cantharellus roseocanus, the rainbow chanterelle, is like C. formosus but darker in color, particularly the undersurface of the cap and the upper surface is dusted with a beautiful light pinkish frosting. These chanterelles are specifically mycorrhizal with spruce, pine and perhaps true fir. Finally, Cantharellus subalbidus, the white chanterelle is almost white in color (although it bruises and ages yellow in spots) and tends to be larger than the other species. It is also mycorrhizal with a variety of conifers at all but the highest elevations.

There are many other edible mushrooms that form mycorrhizae. I’ll mention two favorites.

Boletes and Matsutakes
In the late summer, Boletus edulis (Figure 4) occurs as a mycorrhizal associate with coast pine and spruce on the coast, cottonwood trees in the lowlands, and true fir at elevations above 2,000 feet in the mountains. It probably has more common names than any other species: king bolete, steinpiltz, porcini, cêpe and many others. 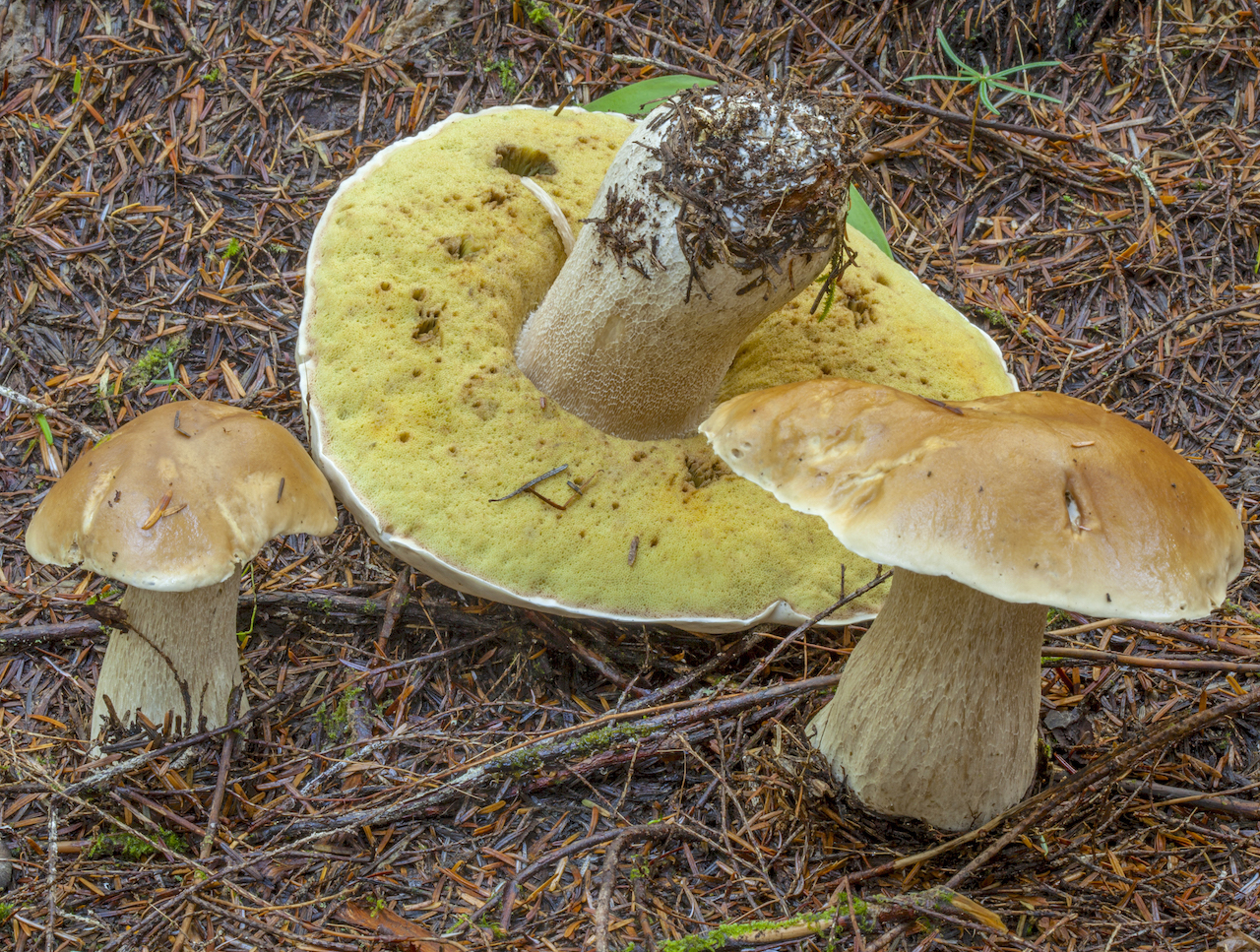 It is a “bolete” because it has fleshy tubes rather than gills that form a sponge on the underside. Aside from its mycorrhizal partners, one can recognize this species from the tan color of the cap, the often swollen stipe, and the white netlike ridges on the upper stipe. It may bruise very slightly blue, but not darkly blue. This species has a delicious nutty flavor and is best preserved by drying.

At the other end of the season, in late fall, one may find another highly desirable species, Tricholoma murrillianum, the western American matsutake. This is another species which forms mycorrhizae with a variety of western conifers at elevations from sea level to 3,000 feet, particularly in areas with well-drained soils. Tricholomas are hefty, late season mushrooms with white spores and notched gills (the gills around the stipe collectively form a notch as you can clearly see in Figure 5).

T. murrillianum is particularly dense in texture, has a ring, and is white with brown stains, particularly on the stipe below the ring. Its most distinguishing characteristic is its odor, which has been likened to a not unpleasant spicy, cinnamon odor with a tinge of old gym socks. In any case, it is very distinctive. A little of this mushroom goes a long way. It is enjoyed as a flavoring element in a variety of Asian dishes, such as stir fries and soups. One caution — this species can be easily confused with other, less desirable (even very poisonous) species. The odor and dense texture are the giveaways.

An interesting additional relation that T. murrillianum has is with the candystick, Allotropa virgata, a non-photosynthetic plant that gets its food from the matsutake mycelium (which in turn is getting its food from its mycorrhizally associated conifer). This three-way relationship is known as mycoheterotrophy (from the Allotropa‘s point of view) and is found among several other plant-mushroom fungus-tree associations. Exactly how the relationship with Allotropa benefits T. murrillianum is unknown, but it brings to mind two thoughts: firstly, if you want to find this mushroom, find Allotropa earlier in the summer and check back later. Secondly, no self-respecting fungus would allow itself to be taken advantage of like this. I think T. murrillianum gets something from the relationship. Only clever research will be able to show us how.

A word of caution: do not eat wild mushrooms unless you are absolutely sure of their identification. The descriptions in this article will help you get started, but always check with an expert.