Standing as an Orca in Boulevard Park 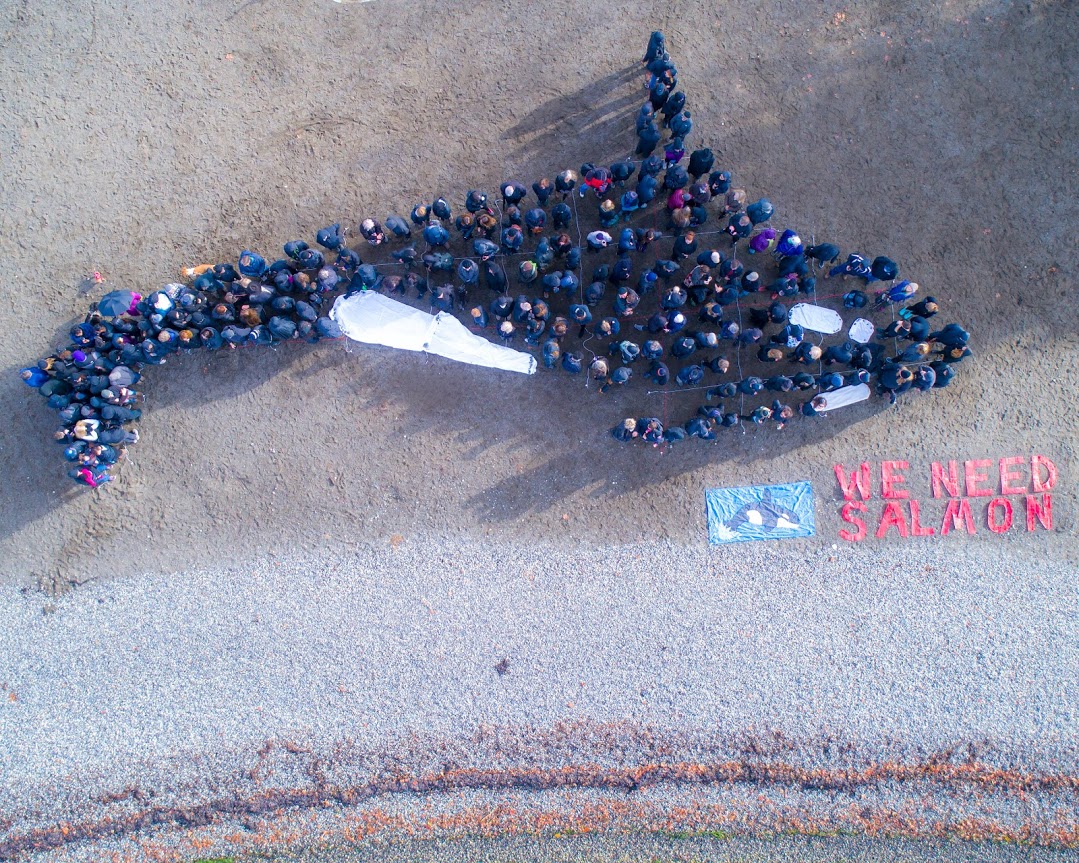 It is roughly three-and-a-half months since Tahlequah carried her unnamed calf (who died 30 minutes after birth) through the Salish Sea in a near mythic, 17-day vigil of grief. Soon after, Scarlet, a young female crucial to the regenerative hopes of the pod, succumbed to starvation and disappeared. For our southern resident orcas, the situation is grim. We either take drastic action now on their behalf, or watch, whale by whale, the tragic pageant of their extinction.

That is why, on November 10, more than 200 people from the region put on black and headed to Boulevard Park. There we gathered to stand not only for the orcas, but as an orca. Guided by volunteers of the Backbone Campaign and Occupy Bellingham, we assembled ourselves into a beautiful, arching, dorsal-finned orca, with the message, like a big orange SOS on the beach: WE NEED SALMON.

And our orcas do. More specifically, they need Chinook. The largest of the salmon, and the reason they are called King, Chinook are key to orca survival, as they require less hunting energy per meal. For thousands of years the southern resident orcas have found those Chinook in the once mighty runs converging on the Columbia River, roughly half of which were migrating toward the Columbia’s largest tributary, the Snake River. That is why scientific monitoring shows the orca swimming down the coast every winter toward the mouth of the Columbia and staying through spring. They are looking for the Snake’s wild Chinook runs.

Endangered Snake River Chinook
But they aren’t finding them, for the Snake River Chinook are also critically endangered, having mostly disappeared when, to create a lock system for barging wheat, the four lower Snake River dams were built through the 1960s and 70s. Over $10 billion have been spent since then trying to mitigate the impact of the dams, with demonstrably little success. Every winter the orca arrive to find mostly ghosts. They scavenge for what they can, but are wasting away.

If, from that spot on the beach, we could have lifted our gaze 750 feet and peered over Lower Granite Dam, the last dam in the four dam chain, we would have gazed outward toward a Chinook Valhalla. Over 5,500 miles of wilderness-protected streams and rivers feed the Snake River, as it dives down western Idaho, then circles northwest again, cupping the eastern bulge of the Rocky Mountains and gathering vast flows of cool, mineral-laden water. Those streams and rivers, and their empty spawning beds, also await their Chinoook. It’s slow extinction on both ends, with four dams in the middle.

The four dams are no longer needed for their original purpose, barging wheat, a job increasingly done by train. As for their minor contribution of hydroelectricity, that can be replaced with solar and wind.

So the question arises, why wouldn’t we breach these dams? What’s the holdup? Here we find the usual suspects: large economic interests, such as the Bonneville Power Administration (BPA) which operates and earns money from the dams. Today’s hostile politics, of which the natural world is often the victim, doesn’t make it any easier.

To be sure, real people with diverse livelihoods are directly connected to those dams, and will be affected when they are breached. That’s why any agreement needs to account for them, with compensation and retraining for those directly affected. But the cup that is emptied is also filled, by a globally significant restoration project which will bring students, researchers, fishers, nature lovers, hikers, kayakers, honeymooners, retirees, lone adventurers, vacationing families — and their pocketbooks, from around the world.

Breaching the dams themselves would actually be the easy part. The harder dams to breach are the ones inside us, set in ideology or indifference, erected by the outdated notion that this earth is our possession, a mere conglomeration of things put here for our indiscriminate use.

Tahlequah blew that cruel and convenient contrivance to Mars. In a sense she threw us a challenge. She said “our hearts are this big.”

Rob Lewis is a poet and house painter, and author of “The Silence of Vanishing Things.” He lives in Bow, Washington.