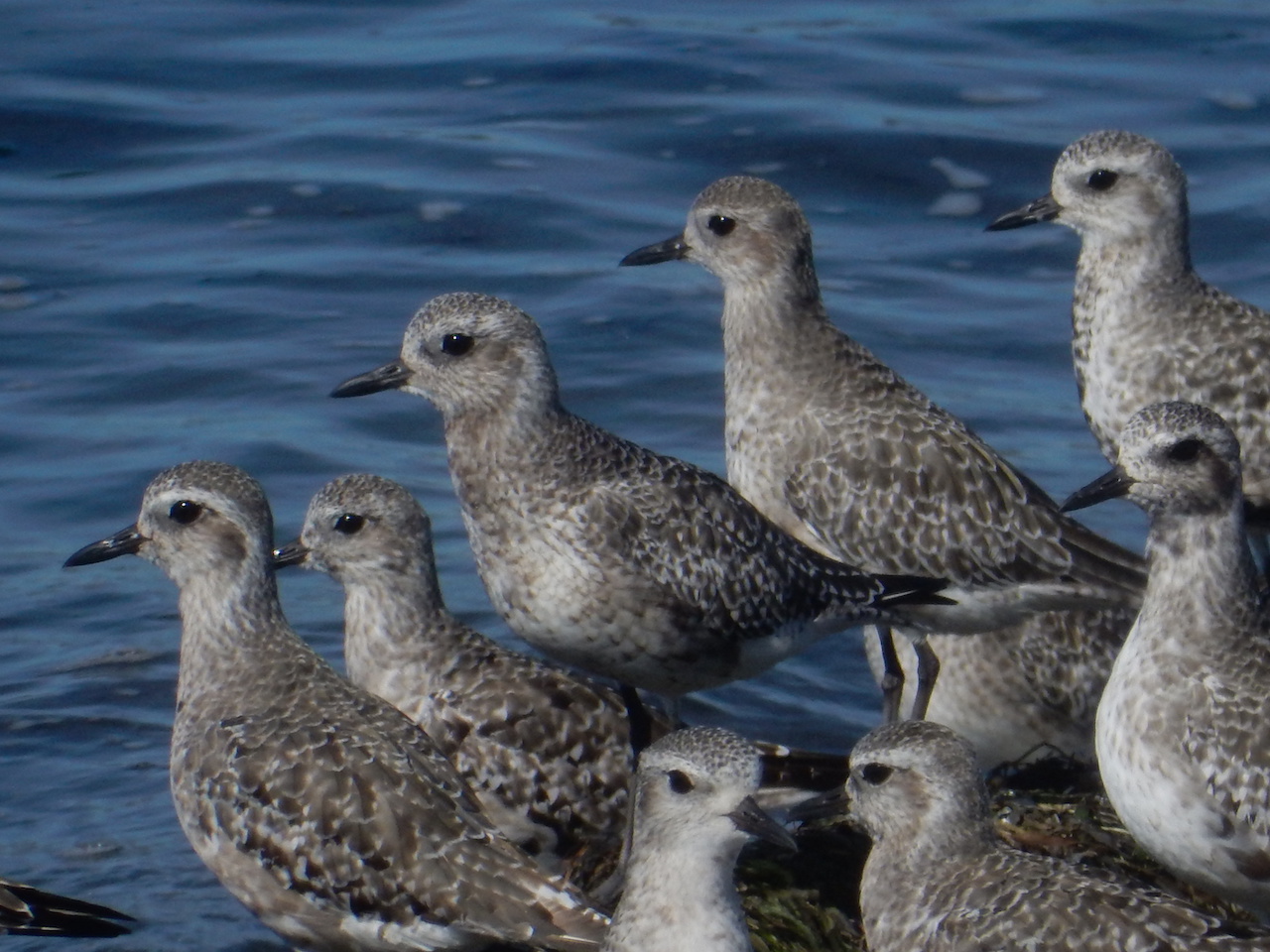 One of the most frequently asked questions I’ve heard from people who discover that I’m interested in birds is, “what’s your favorite bird?” Most of the birders I know have favorites or can at least narrow it down to a few groups of birds, rather than any one specific bird. Personally, I fall into the latter category. Groups of birds in this case transpose to flocks of birds and I can’t think of more entertaining flocks of birds than shorebirds. Spectacular and scenic coastal beaches and estuaries are enhanced significantly by these bundles of energy feeding frenetically with the changing tides.

In my September column, I offered a solution of sorts to the slow days of birding in late summer. If you recall, I recommended that the good birds are to be found along the saltwater shorelines and the cooler temperatures make for more comfortable birding. From early to mid-September my recommendation panned out when early sightings of surfbirds and black turnstones served as precursors of things to come. These early sightings eventually turned into a birder’s bonanza as large numbers of shorebirds began to trickle in on their annual stopover on their way south.

Not too long ago the northbound migration of shorebirds was the big news to birdwatchers everywhere. Just like birds, time flies, and in late August more reports of the southbound migration came in from numerous locations on the beaches of British Columbia and Whatcom County. Like clockwork, shorebirds began to show up in all the traditional locations. The movements of birds are so predictable that you don’t need to consult a calendar as the seasons change. And just like birds, birdwatchers flock to witness the spectacle of mass movements of birds. It often seems like shorebirds are the vanguard of the seasonal changes.

Local birders expect black-bellied plovers to show up in good numbers on the Semiahmoo Spit during spring and fall migrations. As exciting as the spectacle of more than one thousand black-bellied plovers was this September, there were four birds that stole the show and the plovers became a great supporting cast. Marbled godwits and willets are considered rare migrants while bar-tailed and Hudsonian godwits are considered very rare. On September 15, we had all four on the beach at high tide.

So what is it about shorebirds that make them so appealing? I’ve always felt that it has as much to do with where they are as it does with the birds themselves. Open areas of beaches and mudflats offer the birders and non-birders alike a wonderful natural experience with an abundance of fresh air and scenic vistas. Throw in active flocks of birds that often number in the thousands and a memorable experience is at hand.

In North America there are 62 species of shorebirds which range from rare to unusually abundant. Their sizes range considerably from the diminutive snowy plover to the aptly named long-billed curlew. Their choice of habitat varies according to species but most favor shorelines and wetlands where they probe in mud and sand for aquatic insects and worms. It’s not unusual to find shorebirds farther inland but you will see them connecting the dots, so to speak, between favored feeding areas on both northern and southern migration routes.

In Whatcom County we have recorded 31 species in a variety of locations ranging from Mt. Baker to tidewater. As a classic example of wide-range distribution, I’ve observed spotted sandpipers at Heather Meadows and along lower Whatcom Creek at the Maritime Heritage Park. This is a difference in elevation of almost a mile. True to the makeup of the area, it’s not unusual to see a Baird’s sandpiper on the snow at Artist Point and then on the beach at Marine Park on the same day. It sort of epitomizes our local Ski to Sea culture.

While so many of our shorebirds are migrants passing through in spring and fall, some of them stop to spend their winters here. The most common of these is the dunlin, whose numbers can reach staggering levels. It’s not unusual to see undulating flocks of 5-10,000 birds on the wing eluding the rapid pursuit of peregrine falcons. Many of these birds are part of the larger flocks that winter on Boundary Bay and fluctuate between there and Drayton Harbor throughout the winter. One high estimate on Drayton Harbor in January of 1994 listed 50,000 individuals. Often mixed in with the dunlin are much lesser numbers of sanderlings, western and least sandpipers, and the occasional black turnstones.

The most reliable shorebird species in the county, as well as much of North America, is the killdeer. This species is the most widespread member of the family of upland plovers. Its habitat choice runs the gamut across its entire range from farmland to wetland and any open area that satisfies its basic needs. Killdeer are most known for the distraction display they perform to keep potential predators away from their nests or chicks. Other birds do this, but none do it as well or as dramatically as killdeer.

Throughout the county we have a wealth of numerous, accessible locations to see most of the shorebirds that spend time here throughout the year. A good day’s search for shorebirds will certainly include stops at the Semiahmoo Spit and the tidal flats of Semiahmoo Bay. From the spit you can view birds on the bay side or on the Drayton Harbor side with ease. The covered shelters at Blaine’s Marine Park provide good opportunities regardless of the weather. I’ve personally experienced this luxury on numerous rainy-day outings.

One of the most productive sites to observe a few uncommon to rare shorebirds is the small undeveloped area at the end of Sandy Point. The point itself has been developed to excess, blocking most of the viewing sites from the general public. The ownership of the small undeveloped tract seems to be up in the air and would make a wonderful location for a small pocket park for the county to take under its wing.

One way to get better views of shorebirds is from the water. Whether you motor in close to shore or choose to try it at kayak level, the experience is well worth the effort. My personal favorite launching site for kayaking is Wildcat Cove on the north end of Larrabee State Park. From this location you can paddle the shoreline north toward Bellingham or south into Samish Bay. My choice is usually to head north to search for black turnstones and surfbirds on the numerous rocky outcrops along the shoreline. From this launching site, I’ve had great, up-close views of black oystercatchers nesting on the Gargoyle Rock and on Chuckanut Island.

The shorebirds are here now and the numbers will increase as cooler weather prevails so the opportunity is there. If you’d like to hone your skills on field identification of shorebirds, add Dennis Paulson’s “Shorebirds of the Pacific Northwest” (1993, University of Washington Press) to your library. On the jacket of this book, author and naturalist Peter Matthiessen put it very eloquently: “The restlessness of shorebirds, their kinship with the distance and swift seasons, the wistful signal of their voices down the coastlines of the world make them, for me, the most affecting of wild creatures.” I couldn’t have said it better myself.
_______________________
Joe Meche is a past president of the North Cascades Audubon Society and was a member of the board of directors for 20 years. He has been watching birds for more than 60 years and photographing birds and landscapes for more than 40 years. He has written over 160 columns for Whatcom Watch.