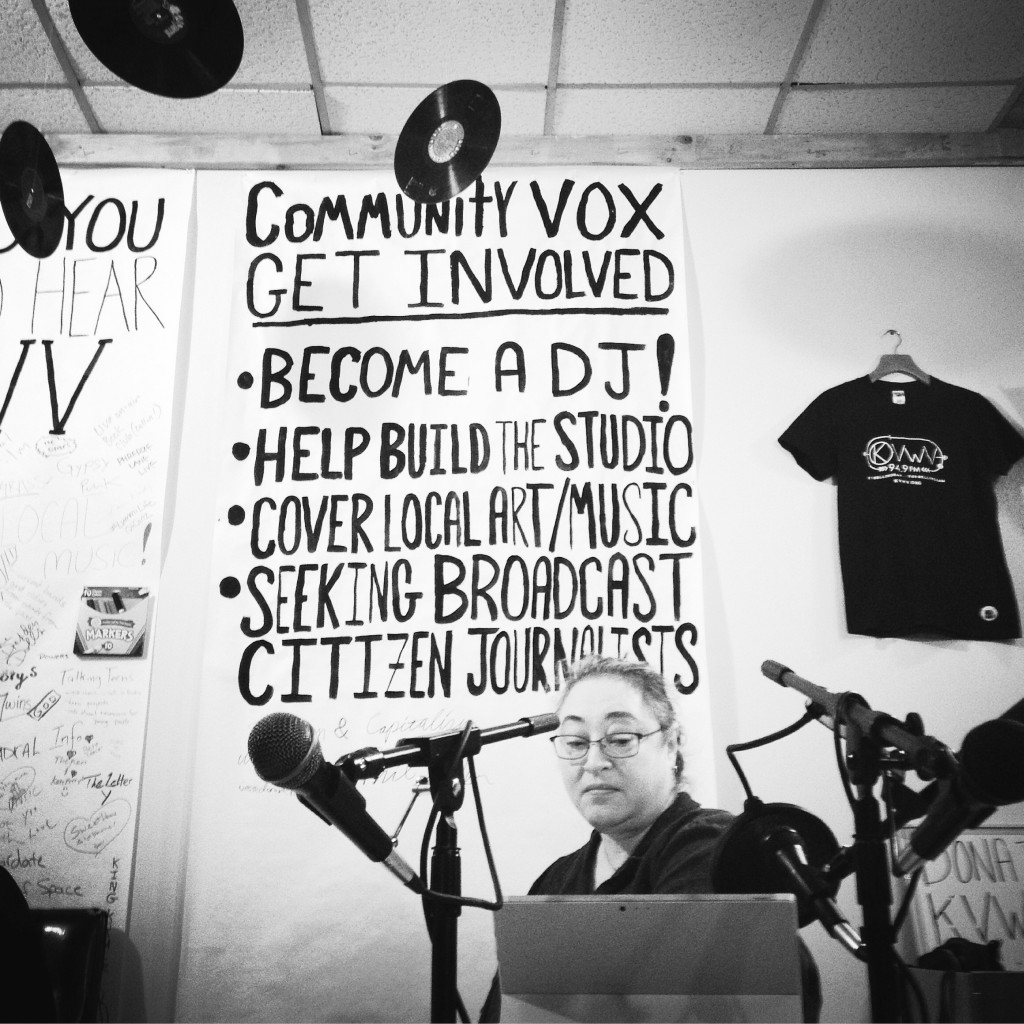 For more than a year, KVWV has been gathering strength as the newest com­munity radio station in downtown Bell­ingham. A year of Internet streaming laid the groundwork for the broadcast at 94.9 FM, which officially began on Feb. 1, 2016. Hundreds of volunteer hours went into building the broadcast facility on Sehome Hill and keeping on the lights in the Commercial Street studio, giving DJs (who also fuel the station’s operation) resources to develop their shows.

The station is committed to providing space on the FM dial for underrepresented news, views and culture. The station places a particular emphasis on organizations working on the frontlines to make Bell­ingham more sustainable, resilient and respectful of cultural diversity.

The weekly show “Lummi Live” pre­miered in May 2015. Hosts Candice Wilson and Freddy Lane provide airtime for people to educate about issues and invite participation in events affecting the Lummi Nation. During Stommish Water Festival, they hosted Native veterans, and on other episodes they have discussed the impact of marijuana laws on community health and shared the origins of the canoe journey.

On an early episode, House of Tears carver Jewell James talked about the need for access to radio in order to fight the power of cor­porations. Part of that is reaching people at home who are discon­nected from ways to fight back. For people seeking guidance, his people’s geomythology storytell­ing tradition gives answers for today’s battles, coming out of 14,000 years of living on this land. “Stories tell you how to re­late to the world around you,” he said. “Inside those stories are our values, ethics, ways of identifying and living with each other.”

People in Whatcom County are hungry for information about what’s going on in their commu­nity, says Edgar Franks, a host of “Community to Commu­nity Bilingual Radio Hour.” He points to shows like Lummi Live and Hour of the Wolf (a weekly talk show on local politics that Stephanie Kountouros hosted for nearly a year) as offering viewpoints and critical dialogue from the grassroots.

Franks grew up listening to the community radio station KSVR in Skagit County. “Every Spanish-speaker had it on all the time,” he says. He got involved with the station — “helping people push buttons and playing songs,” he said, and eventually began speaking on the radio, using it as an organizing tool within the Mexican farmworker community.

“We organized marches out of that. We helped do a general strike. We organized a soccer league through it,” he says. The youth league was a request from a farmworker who came to a march-planning meeting; Franks helped start it in 2006. Radio promotions on how to register led to the formation of eight teams initially; today there are 50.

“If there’s a base of people that want something, they should or­ganize and try to get it,” Franks says. “Community radio is a valuable tool to do outreach and educate people and let them know how they can get involved.” The bi-weekly show he hosts on KVWV with Rosalinda Guillen and Maru Mora Villalpando is a way to share information and analysis of the systems their work addresses, including immigrant rights, food, and racism.

The show is also a platform to amplify the voices of connected communities who are geographi­cally distant but affected by the same oppressive systems. They interviewed people at the Domes­tic Fair Trade Association meeting (held in Bellingham in January 2016) and aired recordings from direct actions at the Paris climate talks.

“Within movements, there’s the grassroots component that does the local work and organizing, lifting voices of marginalized voic­es locally,” says Franks. “Many times within social justice work, you feel really isolated from other communities and the community abroad, so we have to make those connections with other communi­ties in struggle and resistance. It builds community.” 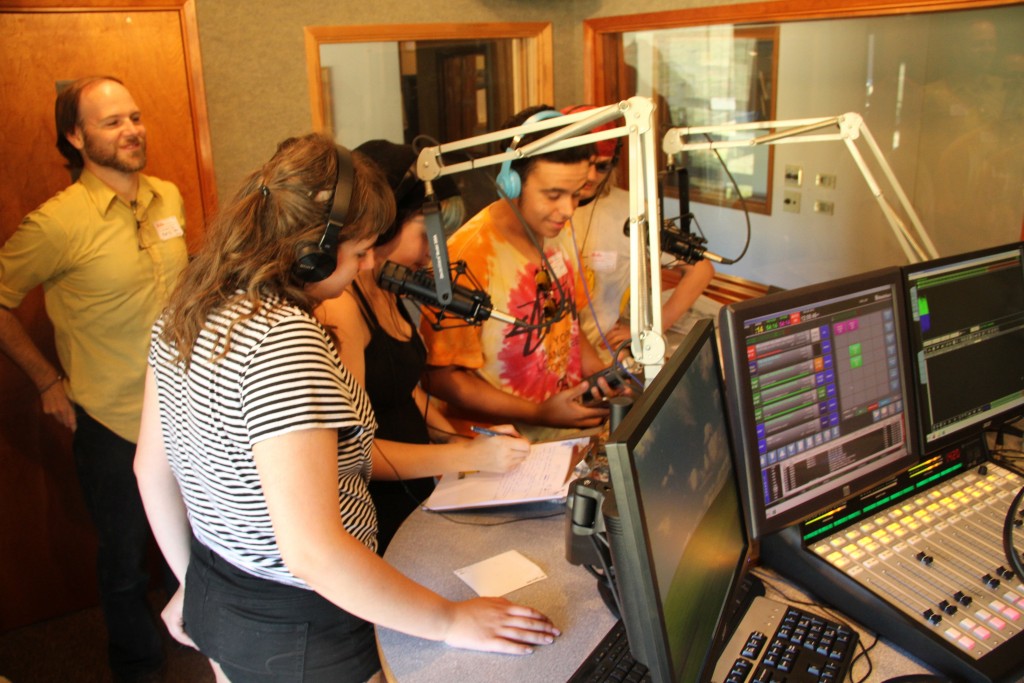 Participants in KVWV’s July radio camp were guests on The Joe Show on KBAI. Most of the week focused on skills and tools for producing a podcast. They also toured KUGS and experimented with broadcasting live.          Photo: Neah Monteiro

What is LP Radio?

Connecting and building power locally is inherent in the low-power (LP) radio medium. The Federal Communications Com­mission created the current class of LPFM licenses in 2000, in the wake of the 1996 Telecommu­nications Act that consolidated media ownership across the coun­try. The number of radio station owners dropped by 25 percent and 10,000 radio jobs were lost in the first five years of the act (1).

Then, a national movement pressured the federal government for over a decade and eventually won the Local Community Radio Act. President Obama signed it five years ago, opening the way for 3,000 new LPFM licenses. Bell­ingham’s Make.Shift Art Space applied for one and, with the as­sistance of radio advocacy group Common Frequency, obtained it. The license gave Make.Shift 18 months to build a station in downtown Bellingham. KVWV was born, joining the Spark Mu­seum’s KMRE 102.3 and Western Washington University’s KUGS 89.3 on the local independent airwaves.

The process of building the physical infrastructure for the sta­tion — and wading through the regulatory requirements — has also been a practice in coming together in community. Dozens of people are breaking out of usual routines to contribute time, skills, and energy to the possibility of a platform that is powered by and serves the community.

In 2015, KVWV raised more than $20,000 to fund the trans­mitter and antenna and cover costs of running the station; funds raised this year will support in-studio equipment. An engineer­ing study by Western student Dustin Sjoerdsma led to selecting the Sehome Hill location for the transmitter. But it took several months for the FCC and Canada to approve the location. Once they signed off this past January, the engineering team led by Bob Wilson quickly finished installing the antenna and transmitter.

Low-power FM stations oper­ate at a maximum of 100 watts. From the transmitter’s location on High Street, that amount of power creates a listening range of up to seven miles, depending on topography. With Internet ac­cess, anyone anywhere can stream KVWV’s programming at www. kvwv.org. Local hosts archive their shows on Mixcloud (go to: www. mixcloud.com/KVWV_Com­munityRadio) within a few days of the original broadcast. 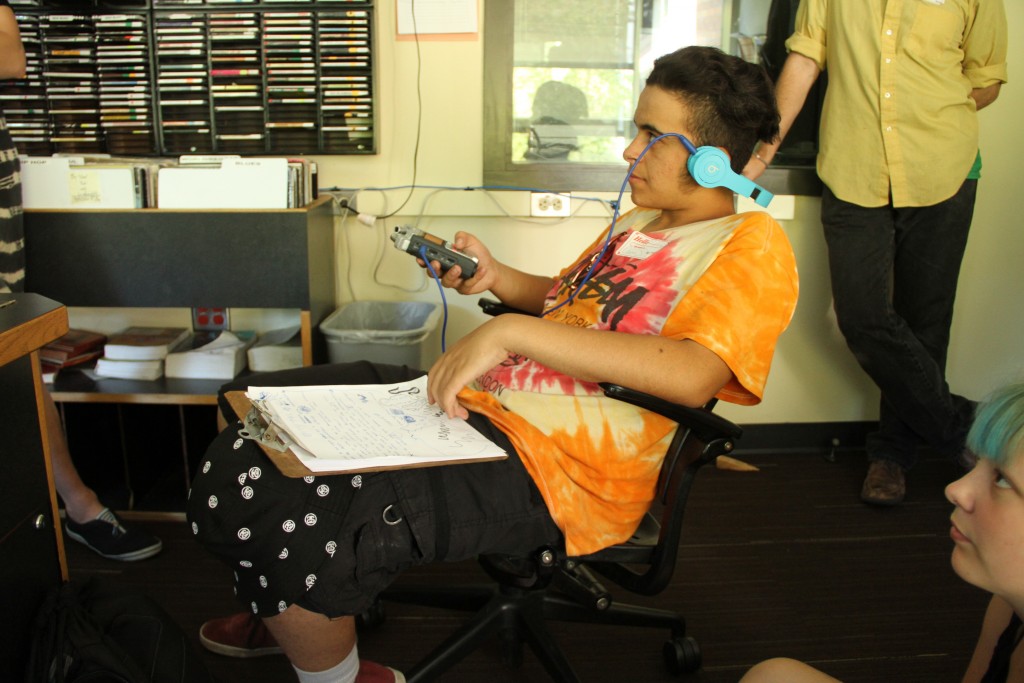 The ability to connect people lo­cally appeals to Emma Van Dinter so much that she named her local-music show “Your Neighbors.” She focuses on underplayed music from Washington and interviews artists in order to bring their ideas and work to the people who live around them. “I want to serve as a resource, so I can connect people,” she says.

Van Dinter is a recent Western graduate, who is stressed, very broke, and looking to do things that are beneficial to emotional wellbeing. Community radio was a big part of her teenage years in Spokane, where she helped host the “River City Mega Radical Show” with her middle school teacher after he got her hooked on radio. When she encountered KVWV at Make.Shift in 2015, she decided to propose a show, and started volunteering with the station doing outreach at the farmers market. This year, she began producing “Budd & Bloch,” a public affairs show that brings together Bellingham residents from different walks of life to discuss politics, marijuana and music.

She sees a danger in listen­ing to the media provided to us without a critical ear. “People are programmed to think certain things because of the media we are getting in our daily lives,” she says. “There is a problem with enjoying things and not realizing the potential power you are giv­ing [the creators]. There is some comfort in ‘us vs. them’ — there’s comfort in the ‘other,’ and in not being the ‘other.’”

As the station grows, Van Dint­er hopes more cultural communi­ties are represented, with their own shows. “KVWV can serve as a resource to open up the dialogue and spread ideas within our area,” she says. “It can help create a more conscious community that isn’t afraid to talk about tough topics.”

Neah Monteiro organizes the Grassroots Youth Radio Camp at KVWV. She spent 11 years away from Bellingham, studying and writing about social movements and student activism in Pennsylvania and Virginia. She moved back to Bellingham in 2015 to put energy into independent media that builds community power and accountability.