It’s 1988. A barge called Nestucca battles the stormy Pacific as it leaves Grey’s Harbor. A rescue tug comes to its aid.

A faulty towline snaps and the tug tears a gash in Nestucca’s bow, releasing its shipment of heavy bunker fuel.

Washington State Department of Ecology director Christine Gregoire had a decision to make. “Get me the binder on responding to oil spills,” she said. There was no binder. No instructions.

She decided to have the wreck towed out to sea so the oil would disperse, but the dense oil product sank and washed up on land. Over 5,000 barrels of oil soiled hundreds of miles of coastline in Washington and on Vancouver Island in Canada. 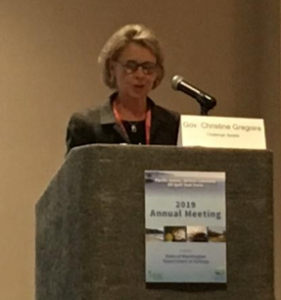 Fast-forward 31 years, and Gregoire, now former governor of Washington state and current CEO of Challenge Seattle, tells this story to the Pacific States/British Columbia Oil Spill Task Force. She kicked off their annual conference and 30th anniversary celebration at the Four Points by Sheraton Conference Center in Bellingham.

“This was totally preventable. We decided that we would never let this happen on our watch again. Thus, came the idea; hence the beginning of what you are all celebrating today,” announces Gregoire.

She founded the task force in response to the public outcry on both sides of the border in the wake of the Nestucca spill.  “I’ve come to believe that you take those tragic events and make sure they never happen again,” Gregoire says.

A year after the Nestucca accident, the Exxon Valdez oil spill dumped 260,000 barrels of oil into the pristine waters of Alaska, according to the task force. In response, a nonpartisan effort by Congress passed the Oil Pollution Act of 1990.

States Fulfill the Mandates
The task force brought together Washington, Oregon, California, Alaska, British Columbia and Hawaii to fulfill the mandates of the Oil Pollution Act of 1990 in their jurisdictions. Now, they have proactive spill response times, enhanced funding for equipment and training, geographic risk assessments, insurance requirements for oil shippers, emergency tug programs, and partnerships with the U.S. Coast Guard.

The involvement of all concerned parties on the West Coast are instrumental in facilitating this kind of progress, according to Dale Jenson, manager of the Washington State Department of Ecology Oil Spill Program.

As the meeting goes on, there are acknowledgements of the remaining work to accomplish the goal of keeping the West Coast safe from oil spills.

According to the 2019 Oil Spill Task Force Annual Report, over 15,000 spills of various severities have happened along the Pacific Coast over the past 17 years. Equipment failure was responsible for 54 percent of those incidents, and human error caused 30 percent of them.

Charlie Costanzo, representing the American Waterways Operators, challenged the task force to use landmark anniversaries like this one to set goals and improve methodology in the future.

“You look back at the good things you have done, and you continue to look forward on more ways you can improve,” says Costanzo.

For instance, Canada’s Trans Mountain Pipeline expansion project will send 34 tankers full of tar sands bitumen through the Salish Sea every month if it is built, a sevenfold increase in export vessels from Burnaby, B.C.

A spill in the Salish Sea would have dire implications for the critically endangered southern resident orca population.

Most oil spills are cleaned up using booms that contain it on the surface. Bitumen is a heavier crude that sinks like the bunker fuel on Nestucca, according to Linda Pilkey-Jarvis with the Washington State Department of Ecology.

“The technology really isn’t there to clean up petroleum once it sinks — so that makes it important to make sure it doesn’t get spilled in the first place,” says Pilkey-Jarvis.

California, which imports bitumen via tanker, has modified its oil spill response strategies to clean it up before it starts sinking, according to Tom Cullen, director of the California Department of Fish and Wildlife. Pilkey-Jarvis says that Washington is working on modifying its spill response procedures as well.

Gregoire has an optimistic outlook for Oil Spill Task Force in responding to future spills.

Jacob Pederson is a second-year student at Western Washington University from Mount Vernon, Wash. He is the Clean Energy Intern at RE Sources for Sustainable Communities in Bellingham.