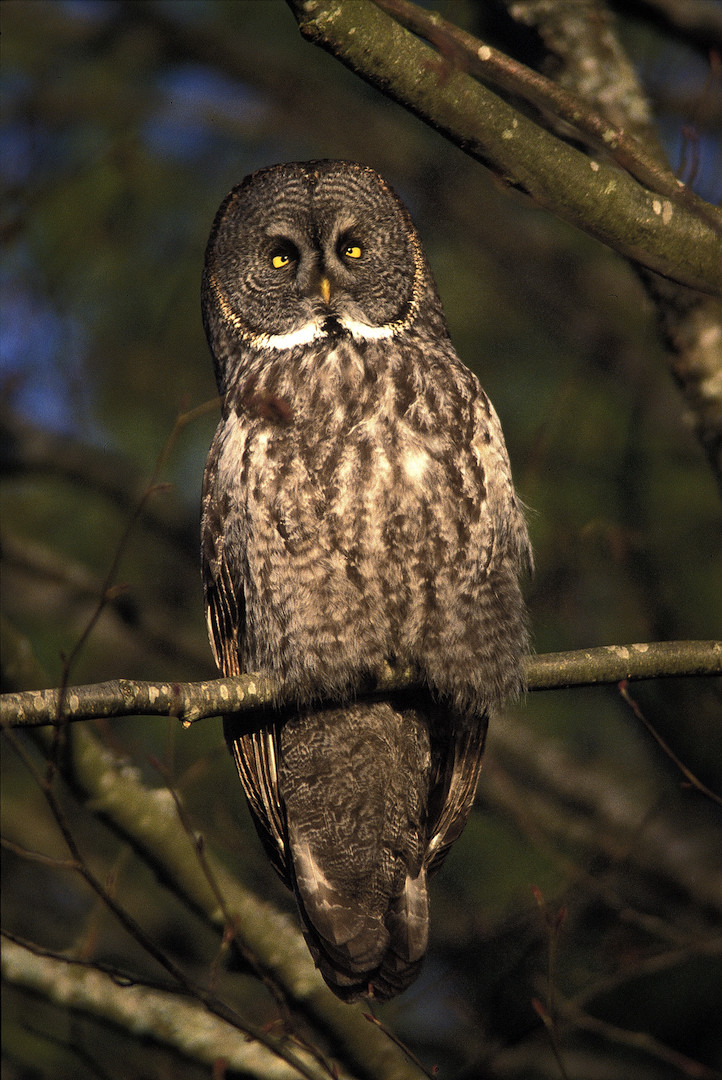 Whenever I think of birds and I’m pinned down to decide which of these remarkable creatures are the most fascinating, I always lean toward owls. I know from personal experience that I don’t just look at an owl and walk away….I spend time observing, making sure to keep my distance and not create a disturbance. Perhaps it’s the elusive and almost secretive nature of owls, or the fact that they’re just not as common as many other birds. Owls are members of the larger group of birds known as raptors and range in size from just under six inches to twenty-seven inches.

Owls are found on every continent except Antarctica. Of the nineteen species found in North America, thirteen have been recorded in Whatcom County. Their choice of habitat ranges from deep forests and deserts to grasslands and tundra. Individual plumage often reflects their habitat and allows them to blend in with their surroundings. Owls are carnivores and most are nocturnal feeders. The edges of their wings are designed for silent flight, which combine with their keen sense of hearing and excellent eyesight to make them efficient predators. They generally swallow their prey whole and regurgitate the inedible parts in perfectly formed pellets.

Owls have contributed more to cultural lore and literature than any other group of birds. They have been associated with sorcery and malicious witchcraft, probably because they were often active at night when humans felt less secure and more vulnerable to natural forces. On the other hand, owls were also seen as omens of good fortune and symbols of wisdom. Some myths still follow owls into contemporary times but this doesn’t distract from the element of fascination held by humans.

My first meaningful experience with owls came when I was on a camping trip with my cousins when I was about twelve years old. In those days our camping trips were primitive when compared with the latest in modern camping. Our idea of camping consisted of grabbing the basics and heading out….a ratty tent, a few blankets, the ever-popular pork and beans, and whatever else we could carry. A favorite destination for our treks happened to be across the road from a cemetery. As we huddled around our campfire, a pair of barred owls calling from the cemetery through the night made for a memorable and lasting impression on the campers. The calls between a mating pair of owls can be unsettling in the dark of night.

Since this is the time of year that owls are well into courtship, breeding, and nesting-site selection, it’s only appropriate to talk about the species we might see locally. While thirteen species of owls have been recorded in Whatcom County, some of these are considered residents and others fit into the uncommon to rare categories. The best way to introduce these owls here is to follow the taxonomic order established by the American Ornithologists Union. This is the same order that most of us have come to rely on ever since we decided to become active watchers. These are brief descriptions but more info on all species can be found at www.owlpages.com.

With the abundance of barns in Whatcom County, it should come as no surprise that barn owls are relatively common year-round residents. Their choice of nesting locations isn’t limited to barns, since they will establish themselves in practically any building that affords year-round access. The old barn at the Hovander Homestead near Ferndale regularly hosted a nesting pair of owls until the county parks department kicked them out. On the Bellingham waterfront there were young barn owls sitting in the rafters of the old Haley building every spring. The number one criterion for these owls is the availability of food, no matter where they nest.

The western screech owl is one species that seems to have fallen on hard times, to the point where they’ve become a rare sighting in the county. In the past, pairs were known to nest in a variety of locations in town, including Cornwall Park, Bayview Cemetery, and Sehome Hill. The consensus seems to point a finger at the pressure from larger owls like great horned and barred, which are known to kill the smaller owls. I had a pair nesting behind my place when I lived in the county and I always enjoyed their distinctive, bouncing-ball calls. 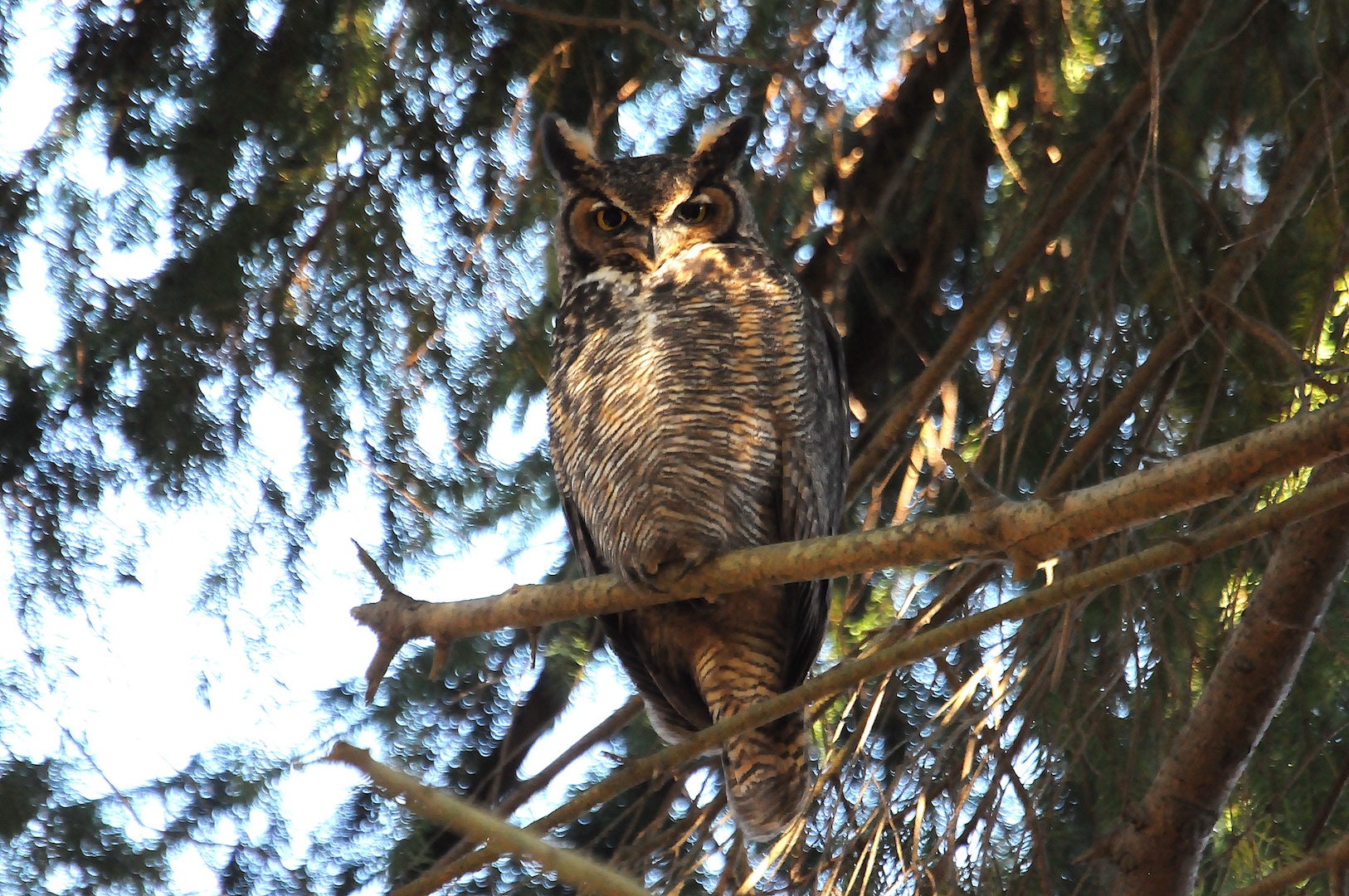 A true master of its domain, the great horned owl is considered by many to be the fiercest of all raptor species. They prefer woodland habitats and prey on mammals as large as rabbits. Neighborhood cats and small dogs are also easy marks. The great horned is a day sleeper that rules open spaces at night. They become alert around dusk and often leave their day roosts for perches on the forest edges.

There are very few birds that generate the excitement of snowy owls. The early November sighting of a lone individual at Sandy Point was proof positive that serious or even casual birdwatchers will travel to see a snowy. Every few years an irruption or mass movement of these magnificent birds across the Northern Tier states creates a sensation like no other bird. The snowy is the heaviest owl and perches in open areas that simulate their normal range on the treeless tundra.

If ever a name was an appropriate description for a bird, the northern pygmy owl fits the bill. This diminutive owl stands only seven inches tall, smaller than a robin. Their size often causes them to be overlooked in many cases. The Bayview Cemetery once had nesting birds but the best chance for seeing one now is on the slopes of Chuckanut Mountain and the east side of Lake Whatcom.

At the forefront in the news about clear cutting and forest conservation not long ago was the spotted owl. In addition to the problems created by deforestation, the process helped to expand the range of another species, the barred owl. Both are similar in appearance and have brown eyes, unlike the yellow eyes of most owls. Spotted owls prefer the quiet of old-growth forests while Barred Owls are comfortable in a range of habitats, including downtown Bellingham.

Great gray owls are almost mythical and spending time with one is an unforgettable experience. They are our largest owl species and often seem quite tame. They prefer forested habitats that border on open meadows, very much like the one southeast of Sumas, where I spent two days with one several years ago.

One of the big attractions for open spaces like the Lummi Flats is the short-eared owl, which often shares air space and prey preference with northern harriers. At dusk on the flats, it is pure joy to watch the short ears and harriers both displaying their incredible aerobatic skills. Like harriers, they also nest on the ground in areas that have little or no traffic from humans and other animals.

Another of our smaller owls is the northern saw-whet owl, which readily takes to nesting in manmade boxes designed for wood ducks. I had occasion a few years ago to view saw-whet owlets inside a wood duck nesting box at the Agate Pond Preserve. This is not an exercise I would recommend, but I can elaborate on that later.

Three other owl species have been recorded in the area. These are considered rare and would generate a lot of excitement in the birding community. They are the northern hawk owl, burrowing owl, and long-eared owl. I had the good fortune to see the hawk owl in the north county, and the long-eared owl on Whatcom Creek after a significant snowfall several years ago. The dry, east side of the Cascades is the place to see burrowing owls.

The allure of owls manifests itself in their elusive and sometimes secretive behavior. Along with all the preconceptions that come with them as bad omens, to be as wise as an owl is considered a compliment. If you go birding in suitable habitats, keep an eye out for dark shapes in trees and listen for scolding calls from smaller birds. They will lead the way.
______________________________________
Joe Meche is a past president of the North Cascades Audubon Society and was a member of the board of directors for 20 years. He has been watching birds for more than 60 years and photographing birds and landscapes for more than 40 years. He has written over 160 columns for Whatcom Watch.