by Fred Likkel and Brad Rader 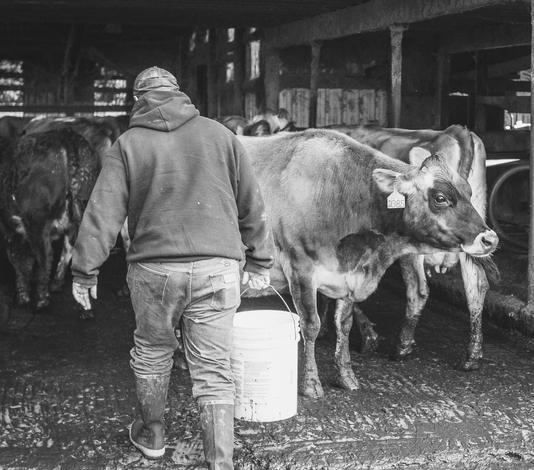 In the April 2017 issue of Whatcom Watch, one of the leaders of RE Sources effectively presented the environmental group’s position on dairy farming. Simply put, their position is that most of our 90-some dairy farmers represent industrial agriculture, which puts profits above the environment and are major polluters of our surface and groundwater, affecting “countless water bodies.” They conclude that major new regulations are required to stop the damage from our farms.

Specifically, they are asking the community to help support their demand that the Department of Ecology modify the new Concentrated Animal Feeding Operation permit to require synthetic lagoon liners as well as a number of other measures.

These accusations and the proposed solutions may sound reasonable to many, particularly those who strongly support RE Sources’ history of environmental activism. But what is at stake in this debate is nothing less than the future of our community and its environment. The solutions they propose would force almost all of our family dairy farmers out of business. We do not make such strong statements lightly, but we base them on solid facts.
Where did we get these facts and how do they differ from what was published in the article written by Lee First of RE Sources?

Lagoons
First, we must dispel the myth produced by the article that lagoons are an awful thing for the environment. Lagoons are now and have been for many years an extremely important part of keeping our environment clean. Bacteria and nitrate contamination can be caused by applying too much nutrient on farm fields or applying it at the wrong time. If applied in rain or to soaked fields, the organic fertilizer (that’s what cow manure is) can run off into our streams. Before lagoons, manure was applied year around because farmers were not aware of the contamination issues. Lagoons came in the 1970s (well before today’s regulations required them) to enable farmers to only apply at the right times, in the right places and with the right amounts. This is a far cry from the environmental mess told by RE Sources.

So, what about this demand for more stringent lagoon liners? Certainly the farming community can’t be against further protections of the environment! Certainly not, but the picture that has been painted about the level of discharge and the cost associated with it is far from reality. Almost all Whatcom lagoons are lined with the soil and cured manure liners specified by the science experts of the Natural Resources Conservation Service (NRCS) of the USDA. The Department of Ecology and Department of Agriculture in our state both accept the standards published by the NRCS as protective of water. Lagoons lined to these standards are proven to leak very little nitrate, and what does leak usually does not contaminate because of denitrification. For more on this, go to Whatcom Family Farmers, “Do Manure Lagoons Leak and Pollute?” (1)

All experts agree that today’s lagoons contribute very little to water contamination — even the experts at RE Sources agreed with that by stating in a meeting with farm leaders that they know lagoons contribute only three percent of estimated nitrate contamination at most. That’s more than what Ecology reports, and what science studies show. Even then wouldn’t the farming community be for an even greater level of protection? Why not install these synthetic lagoon liners?

Recently, a RE Sources staff member reported on a local radio program that these lagoon liners cost only several thousand dollars. This too is ridiculously incorrect. If RE Sources’ demand is met, the average dairy farmer in Whatcom County will have to shell out at minimum a quarter of a million dollars and most likely much more than that.

Costs of Doing Dairy
Most of our dairy farms are small — Whatcom dairies average about 450 cows compared to those in other parts of the state that average over 1,400 cows. Not only that, dairy is in a major market downturn, so that most farmers in the Northwest are annually losing money. According to the national accounting firm Frazer LLP, the average farm in Washington and Oregon lost $239 per cow in the first six months of 2016 — the second worst average loss in the western United States.

Whatcom Family Farmers surveyed Washington and Whatcom dairy farmers in Spring 2015 to evaluate impacts of possible regulations such as synthetic liners. Seventy-seven percent of Washington farmers said they would be forced to quit if their costs reached $500 per cow. The liners RE Sources calls for would cost almost that much, and the other regulations they are demanding would add considerably more. As Whatcom dairy farms are smaller, it is likely few, if any, local farms could survive.

(Survey results and a 20-page document detailing all these issues are available on the detailed rebuttal published on the Whatcom Family Farmers website.)
We hope you can understand why the reaction of most is to throw both hands in the air and say, “We give up.” Even more so if your farm is on the urban fringe, as many are. The high price offered by developers and potential homeowners gets very tempting in the face of these challenges.

But let’s go to the big question: Are our dairy farms causing major water pollution, including the contamination resulting in the shellfish bed closures? No, and the facts are available for anyone to see.

Stream Water Quality Details
Numerous water quality monitoring reports tell a story that has been happening for some time. Water flowing into our streams from Canada contains bacteria counts in the tens of thousands, when two hundred is the standard. On March 29, 2017, monitoring stations at the Double Ditch west of Pepin Brook station at the border showed counts of 55,200! That is many times higher than the water tested near our dairy farms. (Actual results of border station testing are included in our detailed rebuttal available on the Whatcom Family Farmers website.) Similarly, water flowing in the Fishtrap Creek through and out of Lynden is also much higher in bacteria than that near farms. This was noted in a report prepared for the Whatcom County Department of Public Works in 2009, which stated water quality improvement efforts should be focused on runoff in the Fishtrap Creek flowing through and out of Lynden.

Water flowing directly into Bellingham Bay from Ferndale and Bellingham also shows much higher counts of bacteria than near our farms. What about nitrate levels in groundwater? They have been on a decreasing trend for a number of years now as reported in an October 19, 2016, presentation by the Department of Ecology (also on the detailed rebuttal document). The disaster that RE Sources paints of our farmland water quality in Whatcom is a far cry from reality.

Farms are not perfect. But our dairy farms are very strictly regulated and enforced. These regulations specify “zero discharge,” which means even a drop of manure in a stream is illegal. To say, as RE Sources has said, that farmers dump manure directly into the streams and Nooksack River is an outright falsehood. Fines of $20,000 and more assessed against county dairy and berry farms for manure contamination shows this enforcement in action. These fines were reported in Capital Press against a Sumas berry farmer and a Birch Bay area small dairy farmer for manure management violations. (2,3) The call for more regulation makes as much sense as saying we need laws against traffic violations — we have those laws and they are being enforced. But going far beyond regulation and enforcement, our dairy farmers have invested multiple millions in proactive measures such as biogas digesters, making Whatcom County a national leader in such improvements.

The Portage Bay Partnership, signed by seven dairy farmers and the Lummi Nation, was put in place so that farmers and the Tribe can work together to address all sources of water contamination affecting the shellfish beds. It is now very clear, based on the accumulation of reports mentioned, that even if all dairy farms were to leave the county, it would not substantially change the bacteria levels affecting shellfish beds. We must all work together to address the very significant contamination from Canada, from urban runoff, from impervious surfaces, from on-site sewage systems, from pets, from hobby farms and all causes. We invite RE Sources to join in that effort rather than undermine the Partnership with highly questionable accusations against one of the partners.

Local, Not Industrial
Finally, let’s look at the underlying charge of RE Sources against our farmers. They say we are “large scale livestock” operators and are involved in “industrial agriculture.” Most important, they say our farmers put profits above the environment. More than 95 percent of farms in Washington are family owned and operated, and that percentage is likely even higher in Whatcom County. All of our dairy farms are family farms. Our farms are comparatively quite small, and we are seeing more producer-processors who are selling directly to retailers and consumers.

Profits? Unlike most businesses, almost all farmers want to pass their farm and legacy on to the next generation. While many businesses work to maximize shareholder return or look to sell out, our farmers want to continue on with an operation that was most often started by fathers, grandfathers or even great-grandfathers. Profits, if there are any, allow the bills to be paid so that goal of transition can be realized.

We know that many who are reading this have deep respect for RE Sources and its role in our community. Farmers have partnered with RE Sources to improve water quality monitoring and shown them what we are doing to be the best possible stewards. But with this unfortunate effort to impose massive new regulations and costs on farmers – regulations that would do little to nothing to improve the environment – RE Sources appears to be forcing a choice on its supporters and community members. The choice is about competing visions.

For RE Sources, it appears to be a vision without our dairy farms, as what they demand will most certainly spell an end for most if not all. With that loss, the transition to urban and suburban development will accelerate. Farms hosting our magnificent winter birds will disappear. The 100,000 acres of farmland now filtering our abundant rain will be gone. The DailyKos stated the problem in an article on the wildfowl in Skagit County:

“Farms are not natural habitat, but they provide many benefits over urban and residential development, which is what would happen here without ongoing efforts to preserve the farmland. Farms are getting paved over relentlessly in western Washington. 60 percent of the farmland in Puget Sound region has disappeared under development since 1950.” (4)

Family farmers of Whatcom County have a vision for the future that includes active, vital, successful farms of various types and sizes. Small farms alone aren’t viable without the support structure that the larger farms help provide. If what RE Sources’ leaders are saying is accurate, it may be worth it to lose our farms for the sake of the environment. If they are wrong, then we stand to lose our farms and the multiple environmental benefits they provide — without any substantial benefit to the environment. To secure the future of our farms and the environmental quality we want, we need to vigorously oppose actions that will result in losing our farms. We invite all those who share our vision for the best possible environmental future to join us in that effort.

For complete review of RE Sources’ accusations, proposed solutions and our detailed evaluation of these, please view the RE Sources’ Response Fact Sheet at www.whatcomfamilyfarmers.org.

Editor’s Note: Re Sources declined the Watch’s invitation to respond to this article.