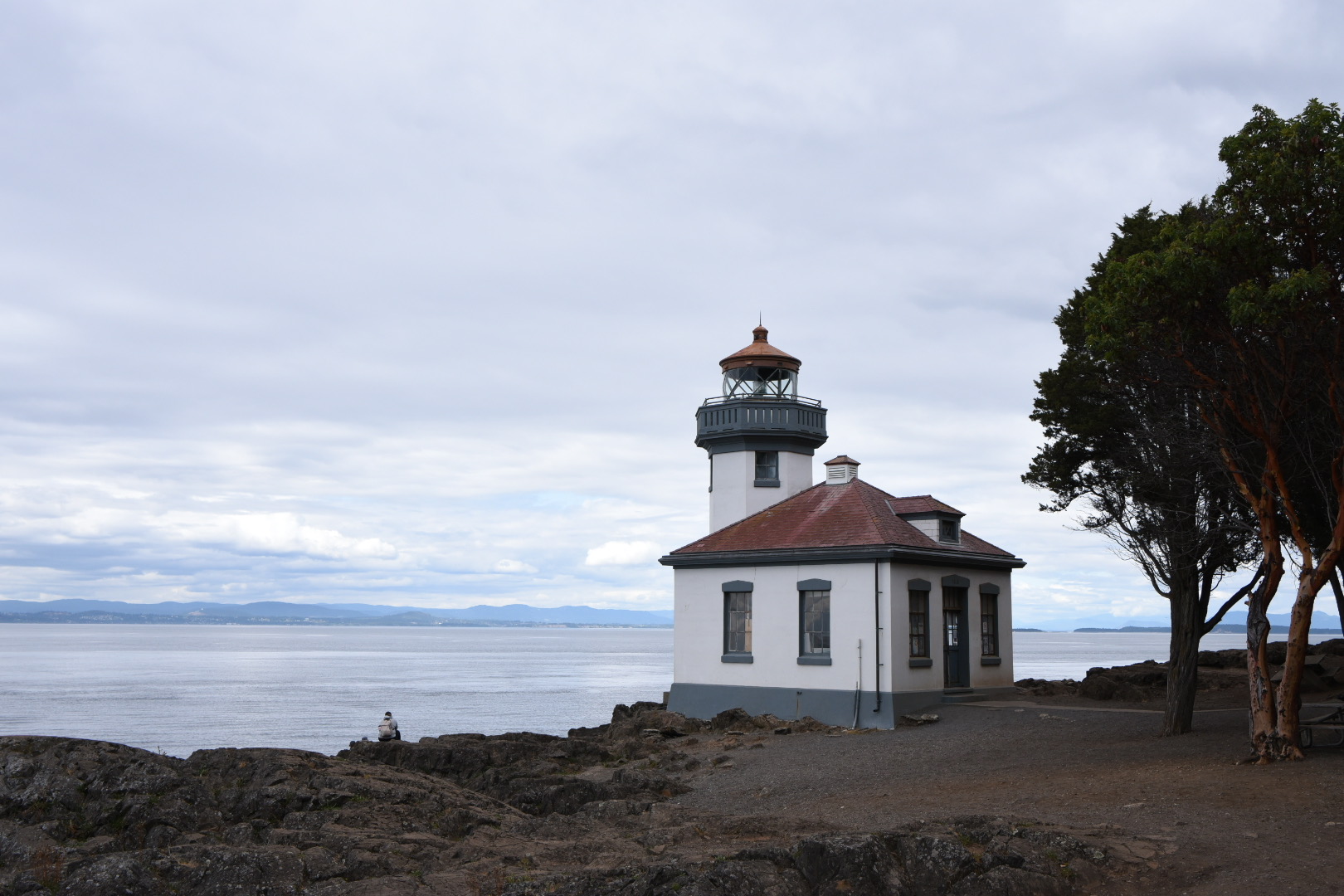 Lime Kiln Lighthouse on San Juan Island is known as one of the top spots in the world to view whales and other marine mammals from land.
photo: Faith Owens

Tucked into the west side of the central Salish Sea by several islands, Bellingham Bay is a rare destination for whales. However, several orcas decided to pay a visit on July 23. (1)

Four members of the Bigg’s orca population lingered at the southern entrance of Bellingham Bay between Lummi Island and Samish Island. (1) Salish Sea orcas are sighted in the bay only once a year or so.

The Salish Sea is home to three distinct ecotypes of orcas: the resident orcas, which are divided into the northern residents and southern residents, Bigg’s orcas, also known as transients, and offshore orcas. These populations exist separately due to speciation, which happens when an umbrella species slowly divides into individual ones that are culturally and biologically distinct. (2) They each have their own diet, social structure, genetics, morphology, dialect, and cultures. (3)

Bigg was also the first person to use photo identification to study whales — a method that is primarily used today. This method focuses on looking at the dorsal fins and saddle patches (the white marking behind the dorsal fin) to identify the orca.

These larger orcas often hunt in open straits in search of seals, sea lions, porpoises, and dolphins. In comparison to resident orcas, they travel in smaller pods and do not communicate while pursuing a meal. Instead, they rely on their stealth. (2) 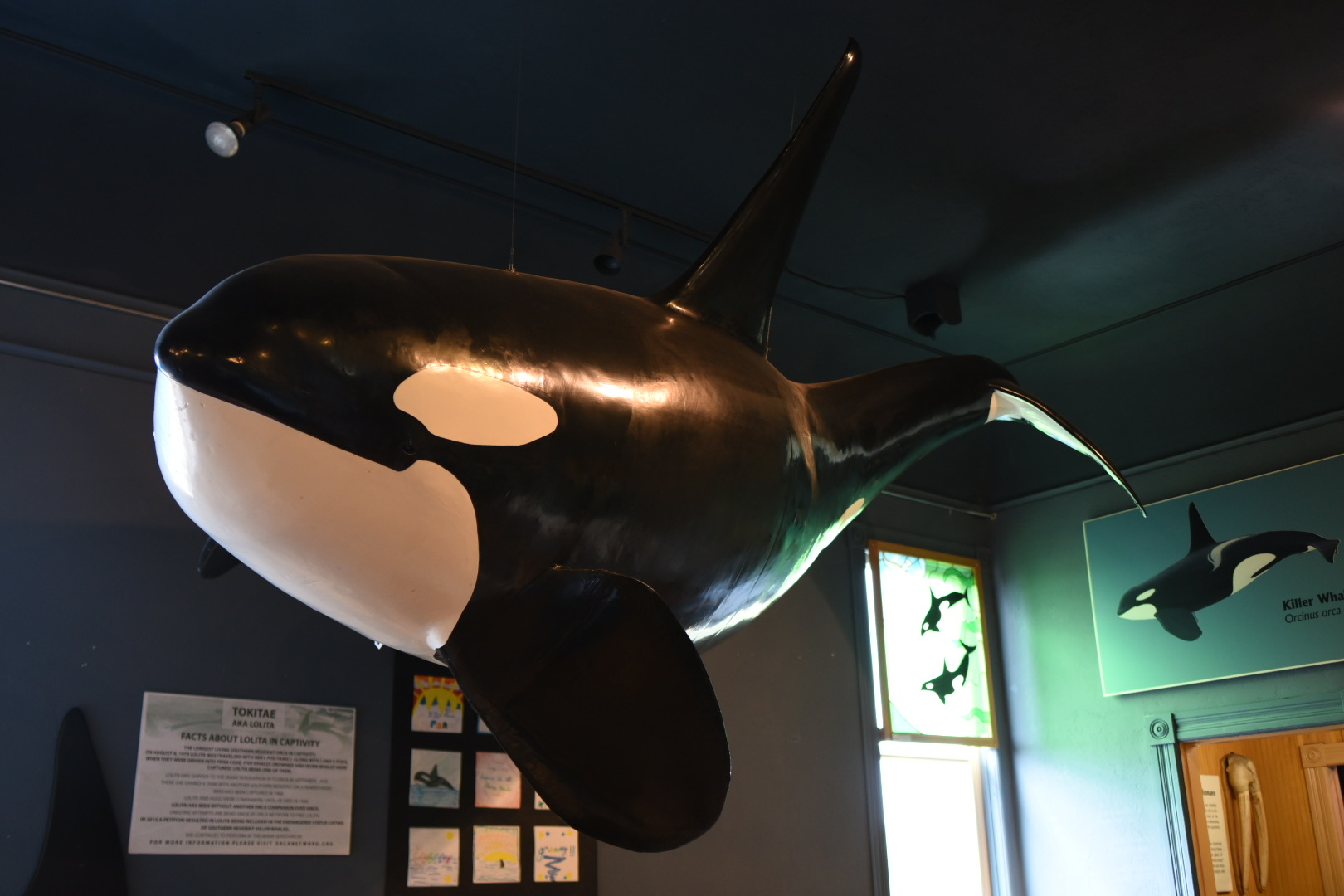 The Whale Museum at Friday Harbor on San Juan Island offers visitors an interactive experience when it comes to learning about whales of the Salish Sea.
Photo by Faith Owens.

Resident Orcas
Resident orcas are named for the fact that they have historically resided in the inland waters of the Salish Sea. Resident orcas are split into northern and southern residents, named for the U.S. or Canadian territory in which they primarily reside. Northern residents are broken down into A, G, and R clans, which are further divided into matrilines. Southern residents are made up of J, K, and L pods that are also further classified by matrilines. (2) Each individual whale has a number and a name depending on its pod and matriline, such as J-35, whose name is Tahlequah.

As a matriarchal society, all resident orcas spend their entire lives with their mother. The matriarchs are the ones to pass on survival knowledge to younger generations, help care for the young, and lead the way for food. (4) If a mother dies, the family unit continues to stay together. (3)

Resident orcas often hunt in shallow bays or rocky haulouts and are highly communicative while doing so. They eat primarily Chinook salmon due to its larger size, higher lipid content, and year-round availability. (2) They will often go out of their way and travel long distances to find Chinook even if another food source, such as chum, is more readily available. This happens because of the generational knowledge of fruitful prey sites and migrational salmon patterns that have been passed down. This predatory behavior has ultimately led to the decline of the southern residents because Chinook populations have drastically decreased and left the orcas starving before they feed on another type of salmon. (2)

Michael Bigg and orca researcher Ken Balcomb completed the first census of Salish Sea orcas in 1976, which showed the alarmingly low number of southern residents. Only 70 individuals belonged to the population at the time, compared to 300 Bigg’s. (2)

“If we lose the southern resident killer whales, it will be the first time in history where we lose a population of animals in which every individual is known,” said Alexandra Morton, who studies B.C.’s wild salmon populations. (3)

There are three main contributors to the fact that southern resident orcas are doing so poorly: lack of food supply, vessel traffic and noise, and toxins. The northern residents face similar threats, but on a much smaller scale because of cleaner, quieter waters in Canada. (2)

Salmon populations in the Salish Sea have plummeted due to factors such as dams, overfishing, and poor management of fisheries. Chinook salmon makes up 80 percent of southern resident diet, and, historically, 90 percent of that Chinook population would come from the Fraser River in British Columbia. One southern resident can eat about 1,500 pounds of salmon a day, fulfilling their daily calorie requirement, which is 10 percent of the body weight of an adult orca. (2)

The southern residents are currently starving, and the population will likely not survive if salmon populations are not soon replenished. As of 2015, more than 100 Pacific salmon runs were extinct and another 200 runs that make up half of the Pacific population are at risk of depletion. In the last six years, the situation has only gotten worse. The resident orcas are not the only ones requiring this meal — more than 137 other species in the Salish Sea region rely on the presence of salmon. (2)

Not only are salmon populations dropping, but their physical size is decreasing as well. Orcas evolved to consume salmon that could weigh up to 115 pounds, which is what they weighed around 100 years ago. Today, the average salmon weighs just 12.5 pounds. (3)

The construction of dams on the Columbia River began in the 1930s and on the Snake River in the 1960s. These dams, among many others, provide irrigation and navigation for barges that transport cheap goods to farmers. These dams also provide a barrier for salmon that need to return to their home waters to spawn and create a poor environment for the salmon that require cold, fast-moving water to survive. These primary factors have led to extinction for most salmon runs in the Salish Sea region. (2)

Vessels pose multiple threats to Salish Sea orcas. The noise that both commercial and recreational vessels emit can interfere with echolocation and pod communication. Since the southern residents are not getting the food they need, they do not have the energy to communicate over all of that noise. If they do expend that energy, they use fat reserves in their blubber, which hold toxins that are released into their system. (2)

The presence of all types of vessels, even ones without engines, such as kayaks, can obstruct the path of orcas and lead them to abandon a hunt. Some vessels, such as barges and oil cargo ships, can present an incredible pollution risk. Vessel traffic and its noise has increased as the human population of the Salish Sea area has grown. (2) The orcas share the impacts of more than six million people living in the region. (4)

Salish Sea Pollution
Orcas are one of the world’s most contaminated species. Persistent organic pollutants, also known as POPs, harm orcas through milk given to offspring and through starvation when fat reserves are burned and the toxins are released into the system. POPs remain in the sea’s food chain because they are stored in fat reserves. There are three types of POPs: PCBs, PDBEs, and dioxins and furans. (2)

PDBE, or polybrominated diphenyl ether, is a fire retardant used in many everyday objects such as clothes and furniture. PDBEs enter the water through urban runoff. (2)

Dioxins and furans come from the papermaking industry, diesel engines, coal-fired generators, and sewage. These toxins come from burning organic material in the presence of chlorine. (2)

“What is happening to the orcas that frequent Puget Sound is no natural disaster,” said Lynda V. Mapes, author of “Orca: Shared Waters, Shared Home” and reporter with The Seattle Times.

The southern residents are an indicator species, meaning that their health reflects the overall health of the region. If the orcas are not doing well, neither is the health of the Salish Sea. Afterall, orcas are historically apex predators of the sea, which means their chances of being killed or hunted hardly exist. However, we as humans have managed to create conditions that have ultimately led to their endangerment. (2)

Salish Sea orcas have ecotype-specific calls, meaning that the dialect of resident orcas can be distinguished from that of the Bigg’s orcas. Dr. John Ford was the first to study orca dialect, and found that it is broken down even further into pod-specific calls between J, K, and L pods of the southern residents. Researchers are able to tell which type and pod of whales is communicating and what they could be communicating about. (2)

Offshore Orcas
Little is known about offshore orcas because they live and travel in open waters off of the West Coast and are hard to study by boat. It is known, however, that they eat large marine animals such as sharks, rays, and other whales. Similar to Bigg’s orcas, they have strong teeth that are worn down from killing and ripping apart large, tough prey (unlike resident orcas, whose teeth are sharp and rigid from ripping apart fish). Offshore orcas have been observed traveling in groups of up to 300 individuals. (3)

“Everyone Loves a Pooping Whale”
Dr. Deborah Giles and Eba, “the whale dog,” lead studies that use orca feces to get a closer look into the life of these whales. (3)

Giles is a conservation biologist with the University of Washington Center for Conservation Biology. This program uses research and education paired with public outreach to inform others about the human impact on endangered species. (2)

The Conservation Canines program is a non-invasive method of research that conducts studies from the mouth of the Fraser River down to Admiralty Inlet, and out to Race Rocks and the San Juan Islands. The whale scat team is looking for funding to expand the study area, since southern residents have been living primarily outside of this area in recent years in search of food. (3)

Conservation Canines uses “last chance dogs” taken from shelters that have high energy and are highly play-motivated. Oftentimes, these dogs are surrendered to the shelter because the owners don’t have the time or energy to give them the lifestyle they need. The dogs are trained and rewarded with playtime for finding feces. (3)

Current research discovered through the finding of feces has shown that lack of Chinook leads to a 69 percent pregnancy failure rate in resident orcas. There has also been amplification of toxicant effects, increased stress hormone levels, disease, and early death. (3) A study done by the University of Washington in 2014 showed that orca stress levels are highest when they arrive in the Salish Sea in the spring and lowest in late August when they leave — this trend coincides with salmon abundance and availability. (2)

To save the iconic orcas of the Salish Sea, both government and community action is urgently needed. The plight of these whales is a crisis-oriented situation that lies in the hands of those who created the problem — the human species.

2. “Of Orcas and Men: What Killer Whales Can Teach Us” by David Neiwert.