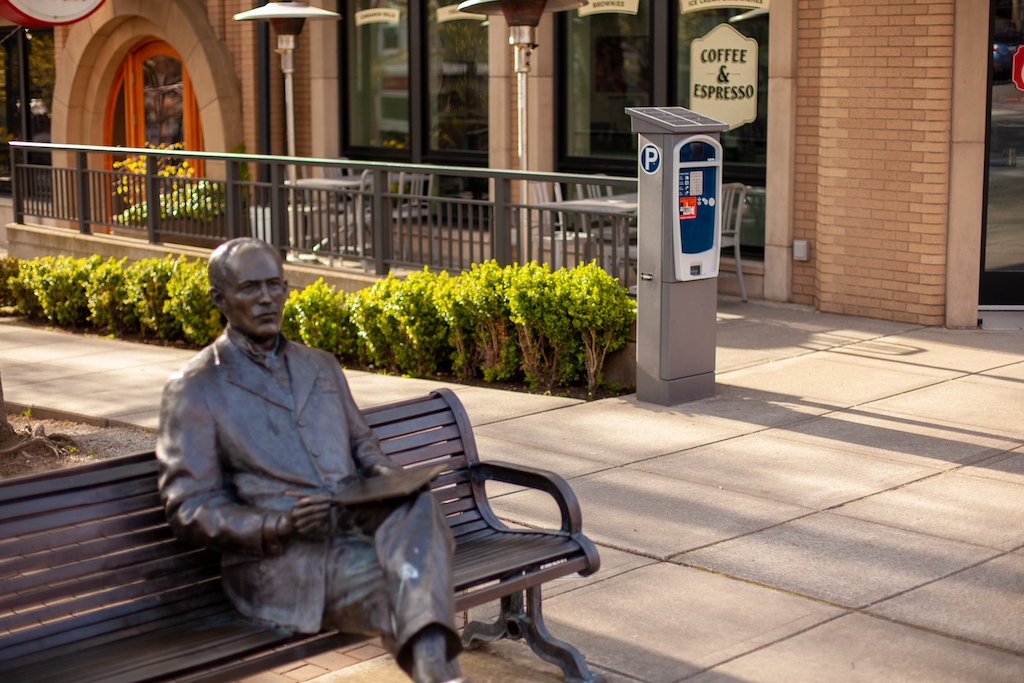 Overheard in early May at the intersection of 11th and Mckenzie Avenue in Fairhaven:
A white-haired couple steps out of their parked car to see a new sign posted on the street lamp reading, “Paid Parking Begins May 1” along with instructions on how to pay via the PayByPhone app. The wife turns to her husband and asks, “Since when does Fairhaven charge for parking?”

Parking meters have been around the Bellingham area since 1938, but last month saw significant changes that have been in the works for more than a decade.
Hourly parking on May 1 went from 75 cents to $1 per hour, a 33 percent change, and the penalty for an expired meter increased by 100 percent from $15 to $30.
The change also brought paid parking and a new permit parking lot in historic downtown Fairhaven.

Parking enforcement will also shift from 11 a.m. to 5 p.m. to 11 a.m. to 6 p.m., Monday through Saturday, adding both an additional hour of enforcement a day as well as Saturday enforcement.

To Stimulate Economic Growth
The parking enforcement department of Bellingham said in a press release that the decision to increase the cost to park in designated areas downtown and in the Fairhaven business district is intended to help small businesses and stimulate economic growth. The resolution was signed by City Council President, Hannah Stone, and approved by the City Council.

Amy Cloud, communications and outreach director for the city of Bellingham, said in an email to Whatcom Watch that the increase in parking cost will ultimately be beneficial to the city. It will fund the removal of graffiti, cleaning, landscaping, and support downtown businesses, she said.

Cloud said that parking rates have not increased since 2008, and that for many years the city has been assessing needs and potential with business owners and others in downtown Bellingham and Fairhaven.

Eric Johnston, public works director for Bellingham, said in an interview that the decision to delay parking cost increases for nearly 14 years has mostly been due to the economic hardship of the 2008 market crash. In 2009, the city commissioned a study for the Fairhaven Parking Task Force working with the business associations and planned for an increase to go into effect by 2020.

“You can guess what happened in 2020,” Johnston said. “Covid really impacted much of the decision-making process for us at that point.”

With the news of Covid-19 and the declaration of a global pandemic, the City Council decided to withhold any increases until the pandemic came under control.

Customers and Employees Struggle
Employees of Fairhaven businesses seem mostly frustrated with the implementation of paid parking, and some business owners feel that it has affected their daily traffic.
“My employees are having a hard time adjusting to the changes,” said Parul Bhathella, owner of Three French Hens in Fairhaven. “I just wonder where they are supposed to park when they come to work.”

Bhathella said she will ask city officials to address parking for workers.
“My customers are struggling as well,” she said, “some of which will have to leave the store halfway through trying on clothes in order to go feed the meter.”
Bhathella said her target audience is mostly seniors, and, in the first week of paid parking, she saw customer foot traffic slow noticeably.

“I just hope people will understand we don’t have a say in the paid parking,” Bhathella said.

Daylen Miller, an employee of Acme Valley Ice Cream Cafe, has heard similar comments.
“I feel like I’ve heard a lot of complaints from the general public since it’s gone into effect,” she said.

The Pit, a Gravel Parking Lot
“I’m lucky, because I take the bus to get to work, but I hear people saying all the time that there is nowhere to park for employees. There’s the pit, but it’s not ideal. There’s no maintenance being done to it, and I heard it just flooded a few months back.”

The pit is a gravel lot across the street from the Fairhaven Green between 10th and 11th streets and has been recommended as a temporary solution by city officials for employee parking until a better solution is found.

Johnston said negotiations are underway to secure off-site parking at another location in exchange for development approval between the city and the pit’s developer.
Though all of the new parking changes have taken effect, the city may have some difficulty enforcing them.

“At this time, we have one parking enforcement officer (PEO), but we are actively engaged in the hiring process to fill the three vacant PEO positions,” Cloud said in an email. “These vacancies were unplanned and were the result of either internal promotions or other job opportunities. It is important to know that there is — and will be — enforcement of the paid parking changes.”

Cloud said that though the parking enforcement officers’ positions have been open for some time, she denied rumors appearing on websites and apps like Nextdoor or Facebook that the reason for the shortages is because of mass firing or resignations.

Parking Citation Costs Increase
The decision to increase the cost of parking citations and metered parking comes at a time when the annual inflation rate for the United States is 8.5 percent over the past 12 months, the highest rate of inflation since December 1981 and after rising 7.9 percent previously, according to U.S. Labor Department data published April 12.

Food, gas and housing expenses have also increased, with the highest increase in cost in over 40 years, according to the U.S. Labor Statistics. The U.S. Department of Agriculture reports an expected increase in food prices to reach higher than 5 percent on average this year, marking the highest single-year surge since 2008.

In a poll obtained by NBC, 81 percent of Americans are expecting a recession by mid-2023. Economists are backing this claim, saying that there is evidence of stagflation, slow economic growth and relatively high unemployment — or economic stagnation — which is at the same time accompanied by rising prices, according to the U.S. Bureau of Labor Statistics.

Parking Strategies Not About Revenue
Cloud maintains that the decision to increase parking was not to increase revenue for the city so much as it was a motivation for shoppers to find places to park.

“We researched potential effects before we developed the changes adopted by council. Studies have shown that there is not a negative impact on the economy,” Cloud said in her email. “Most cities throughout the country use parking strategies ranging from paid parking to time-limited spaces.

“To be clear: this is not about fundraising for the city. Paid parking is not a moneymaker. It is about encouraging shoppers and visitors to come downtown and to Fairhaven, enhancing their experience by ensuring they will be able to find a place to park.”

David Finet, chair of the Bellingham Housing Authority’s board of commissioners, wrote a letter to the City Council expressing disappointment in the decision.

“An increase in parking rates is unlikely to harm residents with financial means,” Finet wrote. “It will, however, deeply challenge low-income individuals without the ability to pay for parking or walk, bike or easily utilize public transportation.”

In response, the council gave an 80 percent discount to subsidized-housing tenants on a $65-a-month permit, allowing them to park on McKenzie Avenue for $13 a month. Over 70 permits for the 50 spots available for McKenzie Avenue sold out almost immediately — before most eligible residents even knew they were available for sale, according to the City of Bellingham website.

Vehicle Numbers Increase
Johnston insists that the justification for the Fairhaven parking increase makes sense in light of a city study from 2018 that found that an increase of more than 1,000 more vehicles have been parked in Fairhaven on Saturdays since 2012.

According to statistics from the Bellingham Municipal Court, 6,595 metered parking violations were recorded in 2018, totaling $98,925. These numbers fell by around 13 percent in 2019 and even more by 2020, due mostly to the effects of the pandemic.
Michael Lilliquist, City Council member representing Ward 6 and Fairhaven, said in an official statement that the increase will not work in favor of the area’s lower income residents, and that the changes will ultimately do more harm for those who can’t afford it.
Residents sharing their opinions on social media such as Facebook and Nextdoor express mostly frustration with the changes.

Hayley Roosa, an employee in Fairhaven, said in a post on Nextdoor that the pit easily overflows by 10 a.m. and “has made parking frustrating for at least a handful of us.”
Eli Yakimyuk said he didn’t mind the changes and shared in a post on Nextdoor, “I would rather pay for parking than not find any at all to begin with.”

End Goal: Progressive Parking Rates
Lilliquist joined the conversation on Nextdoor saying, “the current technology only allows for a flat rate … the plan is to upgrade the technology and add sensors to the parking spaces in 2023, which allow some improvements.”

“Instead of getting a fine if you overstay, you would simply be charged the higher rate for the next hour,” Lilliquist said in his post. “Another one of the advantages is that the city will be able to publish real time availability data by location. You won’t need to guess where an open space is. If you have the app and a smart phone, you will be guided right to the spot.”

While local residents are getting used to the newest changes, they must also prepare for an additional 50-cent-an-hour increase to $1.50 an hour scheduled for next year. That would raise parking fees by 100 percent from pre-May 2022 rates.

Here’s a timeline of the major activities leading up to the May 1 changes:

• 2006: Downtown merchants complain about the early starting for enforcement, and the time changed to 9 a.m.

• 2008: 85 percent utilization reached, but rate changes put on hold due to recession

• 2022: City Council votes to add paid parking to Fairhaven, incrementally increase the cost to park at meters, extend parking enforcement to Monday-Saturday, 11 a.m. to 6 p.m., and increase the fine for expired meters

Resolution 2022-02
The following link is to the Bellingham City Council resolution that established the city’s new parking rate structure. https://iframe.cob.org/gov/council/abhistory/Lists/Log/Attachments/27840/202202.pdf

Tyler Brown is a senior at Western Washington University and an intern for Whatcom Watch, finalizing a bachelor’s degree in visual journalism with dreams of being a foreign correspondent someday.