Back to the Eastside 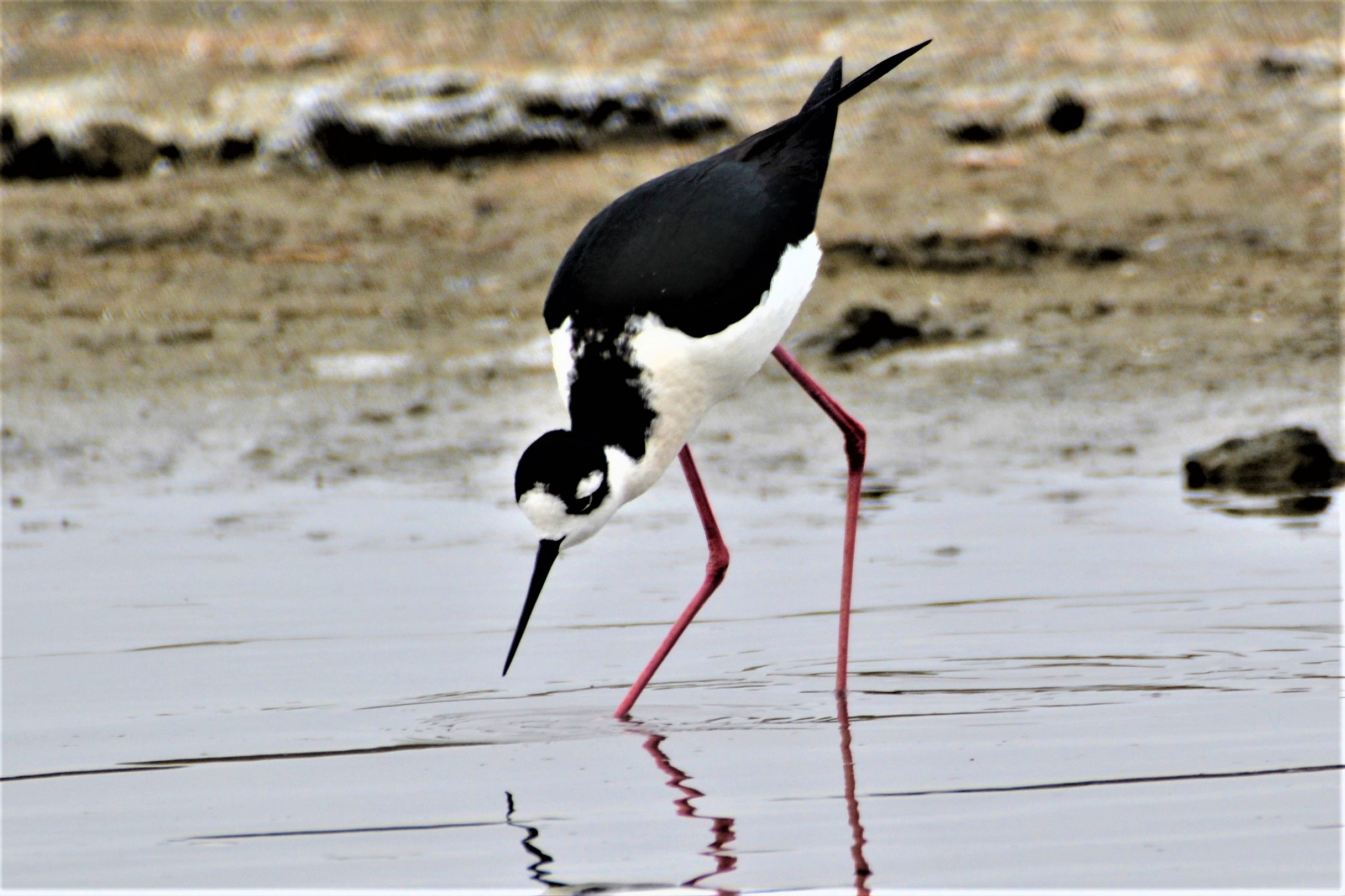 A traditional spring routine for me has been to spend time on the Washington coast from mid- to late April to sample the spring shorebird migration. I’ve always found adequate camping facilities on both the north and south sides of Grays Harbor to serve as a base camp. This allowed me to check the beaches and other suitable habitats from Tokeland to Ocean Shores and everything in between. This year, however, offered a different opportunity. Since I had just spent a week on the Oregon coast, I decided to head over the Cascades and go inland for a change. I certainly knew that it would be different, but I made a short list of places to go and things to see, so off I went.

I was quick to remind myself that Interstate 90 is the most expeditious way to cross the Cascades, but only if you’re in a hurry to get to the other side. I guess that was the deciding factor in choosing my crossing, along with the possibility of seasonal closures or slowdowns of both Snoqualmie and Stevens Passes. Snoqualmie is priority one for the snowplow crews, so I acquiesced. I always have to bite the bullet when I wade into and through Seattle traffic, but thought that an early Sunday departure would ease the pain a bit. I guess when it comes down to it, I’m a back roads kind of guy and the birding is tough at 70 miles per hour.

My target for Day One was Ellensburg, where I would leave the Interstate Highway System to other travelers and take the Canyon Road south toward Yakima. This proved to be a great idea because I immediately began to see birds and even pulled off the road a few times to have better looks at black-billed magpies and osprey nests along the Yakima River. This back road to Yakima is a marvelous drive if you ever have the time to enjoy all the side canyons that are classic examples of the powers of nature.

Of all the choices available, Umtanum Creek was on the top of my list of places to visit. Even though I didn’t have as much time as I needed for longer stay, I pulled into the parking lot to join a few other folks who had the same idea. Peripheral neuropathy is taking a toll these days, so most of my hikes are shorter than they used to be. With that in mind, I ventured into the canyon and was impressed with the soaring basalt cliffs and the subtle mix of shrub-steppe and coniferous forests. As I spoke to other birders on the trail, we agreed that we were a bit early for the best birding on the creek. Such is the life of a birdwatcher!

The colorful yellow-rumped warblers and ruby-crowned kinglets provided the only sightings but no one was heard to complain, given the extraordinary weather. It’s always remarkable to transition from the wetter west side of the Cascades to the dry climate just over the mountains. Rain shadow is not just a theory … it’s real. After a pleasant albeit late lunch in the canyon, the road beckoned and number one on my list was to find a campsite for the night. After stops for a great horned owl at the Wanapum Recreation Area and ice cream in Vantage, I crossed the mighty Columbia River and landed in the deserted Sand Hollow Campground, right on the river. As the lone camper, I was the only human around to enjoy the typical evening flight of tree, violet-green, and barn swallows.

Despite the morning chill, I stuck to my routine and was on the road with a freshly brewed cup of coffee and an energy bar in time for sunrise and the full day ahead. My plan included the potholes and sagebrush flats of the Columbia Basin and the back roads around Othello. This small town is best known in birding circles as the home of the annual Othello Sandhill Crane Festival. This festival began as a celebration of the return of nearly 35,000 of these magnificent birds. They stop over in the area around Othello and the Columbia National Wildlife Refuge during migration in March and early April. Though I was late for the peak numbers, I did see small flocks in flight and foraging in cornfields. The Scooteney Reservoir is southeast of Othello and its shallow water shorelines attract many of the cranes that use the reservoir as a night roost. I enjoyed the wonderful morning chorus of a western meadowlark that allowed me to listen from 20 feet away.

After more back roads searching for cranes and burrowing owls, I pushed northward toward Ephrata and Soap Lake. As it turned out, Soap Lake proved to be one of the best stops of this four-day adventure. The city park was devoid of humans, but the shoreline had good avian activity, including two of my target species … American avocets and black-necked stilts. In the large family of shorebirds, these are two of the most graceful and charismatic. I wanted to stay longer, but the mountains were calling as I headed west. 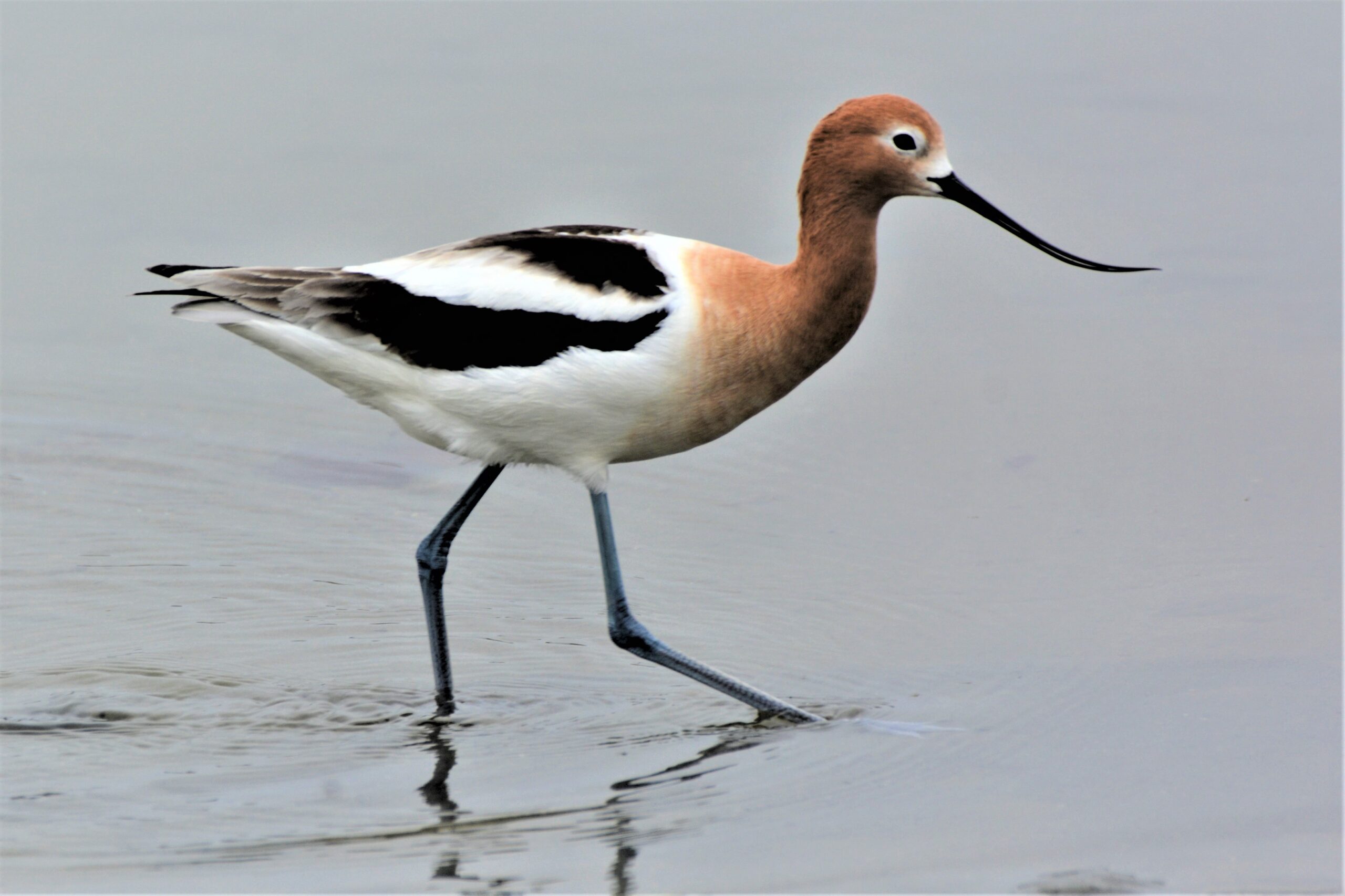 Everyone knows the story of Leavenworth and its makeover as a Bavarian Village, which takes advantage of the spectacular setting on the Wenatchee River, hard against the towering Cascade Mountains. The effort to revitalize the town began in the 1960s when a theme was adopted with new buildings designed to fit the stereotypical image of Bavarian settlements. Having spent time in the other Bavaria, I’d say that the town did a good job, and the setting alone is worth the trip.

Most tourists who visit Leavenworth are not necessarily there to see birds, but just up the road on Icicle Creek is one of my favorite places to relax in the company of a few good birds. In fact, one of the best places in the state to see white-headed woodpeckers is on the grounds of the Sleeping Lady Resort. Founded by Harriet Stimson Bullitt, this 67-acre resort has been recognized by the American Institute of Architects as one of the top 10 green projects in the country. Very few resorts that I’ve experienced can match this one for peace and tranquility in a spectacular setting. Despite Bullitt’s passing in April, it will remain in operation due to legacy funding.

As I headed west over Stevens Pass, I could see that it was still winter, given the amount of snow and mostly filled parking lots. Where Snoqualmie Pass is wider with fast-moving traffic, Stevens is narrower and provides an opportunity to slow down and enjoy the closeness of the mountains. My destination as I eased back into civilization was the Everett waterfront, and specifically the number of great blue herons nesting on old pilings on the north end. The great thing about this heronry is that all the nests are at eye level, albeit from a distance that requires a good scope or telephoto lens.

Wending my way northward, I made a planned lunch stop at Wylie Slough on Fir Island, west of Conway. I saw only remnants of the thousands of snow geese that winter in this part of Skagit County. Despite the expected low numbers of snow geese and the total absence of wintering swans, the wildlife area around Wylie Slough was a treat with numerous shorebirds, swallows, and nesting black phoebes.

My campground for the last night on the road was at Bayview State Park, as was the wonderful hot shower. This all worked into my plan to greet the last day with more snow geese at sunrise on the Samish Flats. The snow geese were there and their music went well with my last cup of camp stove coffee for a while. In all, it was a great four-day getaway with fewer birds than I expected, but nature provided all the variety I needed. I was reminded that the Pacific Northwest weather doesn’t always conform to what we want. Always take appropriate layers to suit the day.