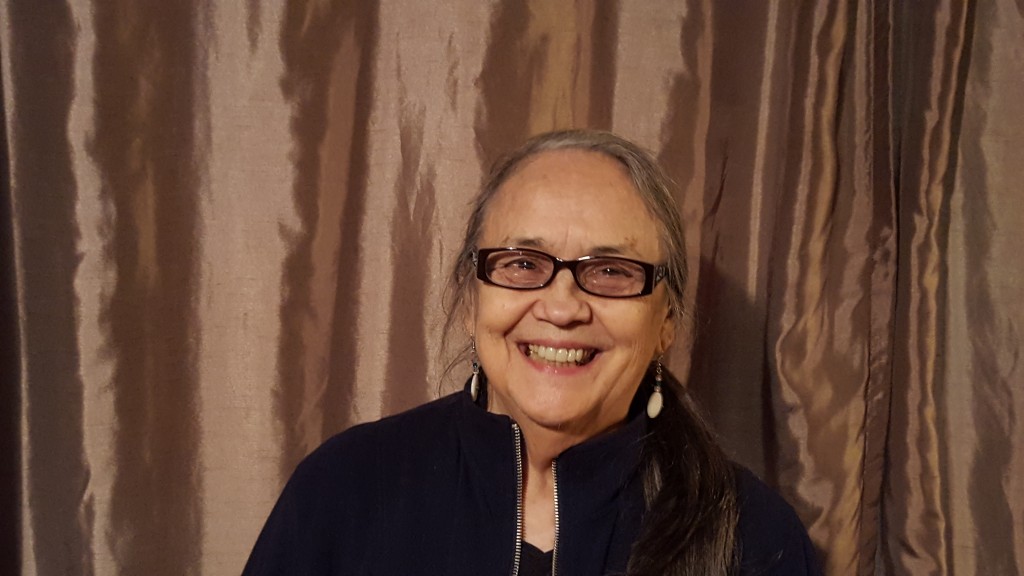 Juanita Jefferson is a retired 80-year­old Lummi Tribal Elder who has been an activist most of her adult life, working unceasingly for the well-being of her community. She has raised four sons and has 53 grandchildren. She has been guest speaker and co-taught with Beth Brownfield at the Martin Luther King Conferences at Whatcom Community College.

Kathryn Fentress: Please tell me about where you grew up.

Juanita Jefferson: I was born in Bellingham. My father was full blood Lummi and my mother was nonnative. My father’s mother had a place at Lummi so we lived there until I was five, and my folks had two more girls and a boy. Then my father got a job at Boeing and we moved to Seattle. I was raised in public schools and after graduating high school, I also went to work at Boeing for the next twelve years.

When did you reconnect with your Native culture?

While I was at Boeing, I wanted to learn more about my native heritage and started going to the Seattle Indian Center. This was an important time in my development. I learned beading, Indian dancing and story-telling, and I volunteered. I said “yes” to whatever they asked me to do, and they taught me how to do what­ever it was. The program was a mixed tribal project and the policy was that no matter what tribe a person was from, everyone was equal. These elder women taught me to be a leader. Eventually, I was elected secretary and then president of the American Indian Service League.

When did you return to the Reserva­tion at Lummi?

In my personal life, I met my husband David when I worked at Swinomish in the late 1960s. He had three sons already. We decided that our firstborn should grow up at Lummi and we have been there ever since. I have always worked for the tribe both in salaried posi­tions and as a volunteer. I feel I have a mission to help my people however I can.

Kathryn: What are some of the volunteer projects you’ve done in the past?

I was the first personnel director at Lummi. Tribal leaders decided I was good at organizing and work­ing with committees and boards. Over these past 46 years I have served on at least 40 of them. I served as chairperson on the tribal council a couple of times. I was singled out for leadership train­ing at Western. I still continue to serve on a number of boards. One of the underlying principles we hold dear at Lummi is that all ages need to be represented on important matters.

I have always taken a special interest in the youth of the tribe. One of my favorite roles was as advisor to the Cedar Project. Our mission was to create an adult and youth partnership tasked with finding ways to make the community safer and to develop more options for young people on the reservation. The work was very personal and fulfilling for me. Some of the young people who came through that program have gone on to become leaders in the tribe.

Another issue that has been a longstanding concern is child­hood sexual abuse. Years ago, I brought the issue out into the open and was met with silence. This was in the 1970s and no one was really focusing on those issues back then. I pulled back and worked on a more grassroots level. I believe grassroots movements are necessary for substantive change. I would look for people who were concerned. I would listen and re­cruit them to help out. Ten years later we finally got a social service director at Lummi. I met with the new director and explained we needed to tackle the issue. The director was responsive and arranged from WCSAP (Washing­ton Coalition for Sexual Assault Programs) to provide training for some of our staff. The tribal council has finally acknowledged the importance of these issues.

Issues unfortunately do not stay in style and fluctuate as leadership changes. At one point money was set aside for the victims and the perpetrators and their families! This is what is needed. There has been progress. Currently we now have mental health services on the Reservation and a contract with some native healers in Canada to present on this topic. We also have Lummi Victims of Crime which provides advocacy and counseling for victims of sexual assault.

What volunteer projects are you involved in now?

I am currently on several task force committees for the council. I want to see and hear things myself. Currently the tribe is experiencing a financial crisis. For many of the last ten years, money has been readily available. The tribe bor­rowed a large loan to build new homes and a new administration building. Then the Canadian dollars that supported our casino and other businesses in our area dropped in value and volume. So, suddenly we are short of money for our operating expenses. Un­fortunately, we have had to do some cutbacks on employees and program expenditures. I am also working with my niece Danita Washington and Irene Morgan and Joy Gilifilen on a Restorative Justice project. Once again it seems a grassroots effort is needed to pave the way.

Sounds like it has been a difficult journey for you, and often a lonely one. How do you keep your spirits up?

I grew up in an alcoholic family and experienced deprivation so I learned to try harder. I knew early on that I would always work for my people but that was all I knew in the beginning. I also just tack­led whatever was put before me but did not see that as strength in me. Now I have started to think I do have some skills. I have cu­riosity and a desire to know, so I research and find out. I can ana­lyze situations and help groups in problem-solving and finding new ways to approach things.

I was angry for many years that progress was so slow or blocked entirely. Now I have more pa­tience. Now I have people who are willing to sit with me and not lecture me but listen to what is important, and we laugh and share. I have done this with a number of young people: this work is done privately rather than in committee meetings. All the little interactions with each young person often made a difference. I see them sometimes and they tell me that it was what I said years before that made them go on with their lives in some inspired way. Hearing these things touches my heart and keeps me hopeful. I have also been going back to church on a regular basis and spending lots of fun time with my grandchildren.

Kathryn: Thank you, Juanita, for your commitment to your community and your unwav­ering perseverance. May you continue to find joy with your grandchildren and peace in your heart.