Do Convention Centers Live up to Their Touted Benefits?

Editor’s Note: In October 1994, the Bellingham City Council created the 17 member Convention Center Task Force. In December 1995, the task force recommended a 22-story complex be built in downtown Bellingham. The plan called for a 13,485 square foot conference/convention center, 160 room hotel with the top floor containing six exclusive residential units, six floors for offices, and four levels of basement parking for 605 vehicles. In July of 1996, the task force announced it was regrouping after all the negative critism. It died a quiet death.

[This article is edited and reprinted, with permission, from the April 1994 issue of The Atlantic Monthly.] 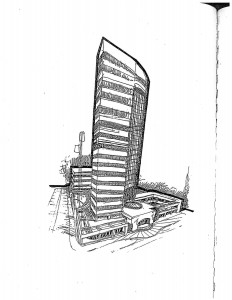 The towers of Kansas City’s new convention center rise like the masts of a world-class suspension bridge, spanning Interstate 70. When it is completed this fall, the massive exhibition hall will join a number of other new facilities around the country which are vying for major conventions. These multimillion-dollar convention centers are built in the expectation that hordes of free-spending conventioneers will bolster local economies and revitalize downtowns.
[…]

Like other convention-center backers throughout the country, Kansas City officials saw their project primarily as a catalyst for downtown revitalization .… To city officials, the beautiful architectural sketches were like a full banquet set before the starving.
[…]

Like other new convention centers, Kansas City’s will never cover its operation costs and debt expenses with rental revenues — not in the buyer’s market created by dozens of competing centers …. [T]ravelers and tourists are the primary candidates to cover costs. Kansas City, like many municipalities, has raised the hotel-motel tax to help cover convention-center costs, to the tune of some $7 million a year. But the biggest new source of income is a citywide 1.75 percent food and beverage tax, which generates more than $9 million a year.

In the end, convention centers have a dangerous allure. The convention trade is widely seen as a civic windfall, with thousands of expense-account-laden visitors dropping millions of dollars into the local economy without demanding that the city educate their children or guard their houses …. A more universal economic benefit is outlined in the feasibility studies that cities invariably commission, for $50,000 or more, to provide a basis for their decisions. These reports … are clearly designed to impress the public officials who order them. What they don’t do is withstand any sort of intensive scrutiny…. In the key Kansas City study … each dollar spent by conventioneers was considered to multiply to $3.30 for the county and to $4.50 for the state of Missouri, with plenty left over for neighboring Kansas. A report prepared after the city council’s decision … reduced the multiplier to a more realistic $1.80.

Finally, convention-center feasibility studies admit that they make no claim to study comparative merit. Could the same $100 to $200 million bring in new industries with high-paying jobs? What could this money do to rejuvenate neighborhoods, repair streets, improve schools or reduce infant mortality? Not only will you not find the answers in these studies; you can’t even find the questions.

Once the investment is made, a city has little choice but to remain in the bidding wars to attract major conventions. For a few days a year the hospitality industry in cities like Kansas City … will glory in the convention business as [conventioneers] fill hotels and restaurants. But all this activity will not correct the basic flaws in the convention-center logic — flaws that mean unending tax support will be needed and urban development will be consistently disappointing.

We will be paying the price for many years to come. Just check the surcharge on your next hotel bill.