At the February 2020 City Club meeting, Whatcom County Executive Satpal Sidhu asked us to offer five solutions to the problems we think are most significant for the county. Here are my suggestions to deal with our water-supply problems.

Background
The problems that motivate these suggested solutions are: poor status of salmon and other fish, failure to meet the Washington State Dept. of Ecology’s Instream Flow Rule, and the almost certain worsening of the supply/demand imbalance because of climate change. (1) As the figure shows, summer temperatures are expected to increase substantially over the next few decades and summer precipitation is expected to decline, leading to greater use of water for irrigation. And, streamflows are expected to drop substantially during this period. 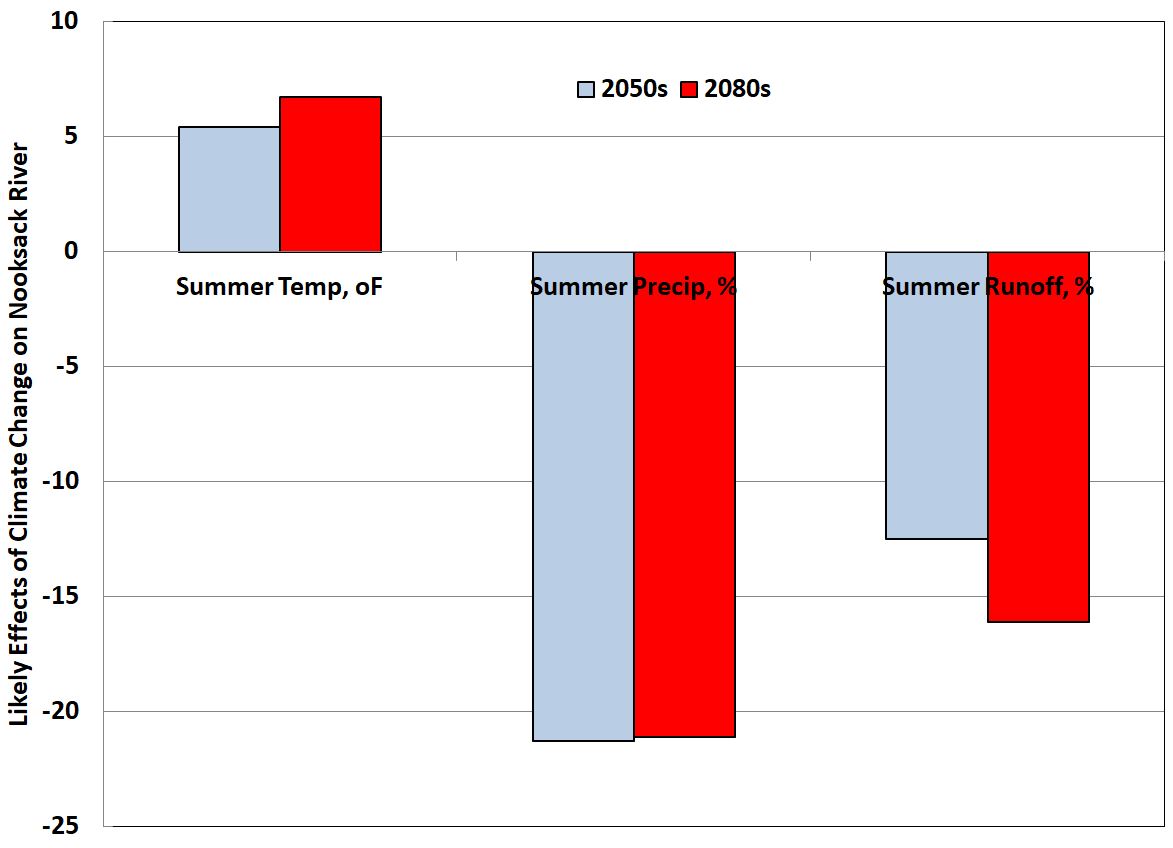 Likely effects of climate change in the 2050s and 2080s on summer conditions in the Nooksack River: temperature (degrees Fahrenheit), precipitation (rainfall), and glacier runoff.

Suggestions
1. Work with the Lummi Nation, Nooksack Indian Tribe, and Washington State Dept. of Fish and Wildlife to quantify instream flow requirements for healthy salmon and other wildlife. These cubic-feet-per-second (cfs) values should be specified for various reaches of the three forks, lower Nooksack tributaries and the mainstem Nooksack River. Establishing minimum instream flows to support wildlife will then allow us to determine how much water is available for human out-of-stream uses.

2. Work with the six Watershed Improvement Districts (WIDs), Whatcom Family Farmers, and Whatcom Conservation District to meter water use for a representative sample of farms that irrigate grass, corn, blueberries, and raspberries, the major crops in Whatcom County. Without a better understanding of who uses water, where and when for this most important water use, (2) we cannot determine how serious the current and likely futures imbalances between water supply and demand will be.

3. Work with the Whatcom Water Alliance, Watershed Improvement Districts, Whatcom Family Farmers, and Whatcom Conservation District to encourage greater efforts on water-use efficiency. For the past few decades, our efforts to deal with water quantity have focused on increasing supplies. Examples of these efforts include stream augmentation, farmers shifting their water source from streams to groundwater wells, the Birch Bay deep well project, and managed aquifer recharge. During this period, almost nobody has seriously investigated the potential benefits and costs of water-use efficiency. (3) The benefits of water-use efficiency are likely greatest for irrigation.

4. Work with Ecology, Watershed Improvement Districts, and Whatcom Family Farmers (as well as the two tribes) to resolve issues related to unpermitted water use. These are problems that have been with us for at least three decades. They are also vitally important because roughly 40 percent of the water used for agricultural irrigation lacks authorization from the Department of Ecology. (4) Fortunately, the farmers in each of the six Watershed Improvement Districts hold enough water rights to cover both permitted and unpermitted water use. While a solution to this major problem is technically feasible, we lack the will and political courage to make it happen.

5. Appoint someone in county government at a high level to coordinate and catalyze local efforts to resolve water-supply problems. I believe current planning efforts are stalled because we have too many groups holding too many meetings, with nobody accountable and nobody in charge. With respect to watershed planning, we have the Planning Unit, staff team, management team, and Watershed Management Board. Do we really need that many organizations holding so many meetings, most of which deal more with process than substance? A strong leader willing to knock heads might break the longstanding logjams that prevent us from developing — and implementing — a plan and set of projects to resolve water supply issues.

(2) Agricultural irrigation accounts for almost 70 percent of summer water use in Whatcom County. These are exactly the times when streamflows are the lowest and water temperatures are the highest, with consequent adverse effects on salmon and other fish.