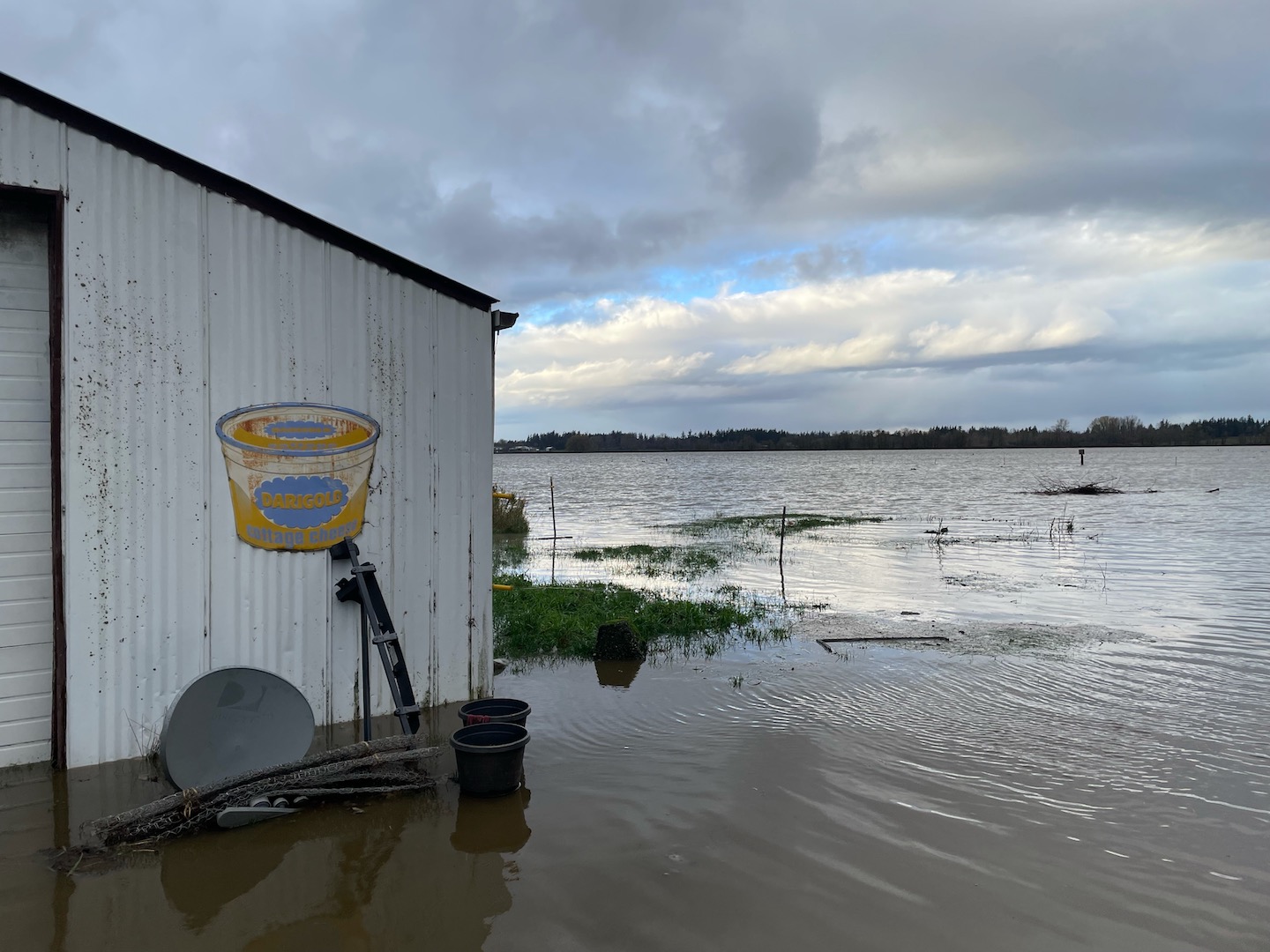 Steensma Dairy and Creamery west of Lynden had to rescue over 40 heifers from the November 2021 floods.
Photo by Katherine Steensma

Is Whatcom’s Harsh Weather Due to Climate Change?

As we move on from 2021, we won’t soon forget what its weather did to us. In June, we had record high temperatures everywhere, reaching 99 degrees Fahrenheit in Bellingham and 108 degrees in Sumas, and the mercury briefly reached 100 degrees again a few weeks later. Then, in November, the atmospheric rivers hit, dropping over 5 inches of rain in 48 hours after the ground was already saturated.

Both the South Fork and the mainstream Nooksack overtopped levees and the river broke through them near Everson. Whatcom Creek shut down Iowa Street in central Bellingham, while Squalicum Creek overflowed near its mouth north of downtown. Sumas, Everson, and Ferndale were all mostly underwater. Estimates of damage run at least $50 million, and USGS weather records tell us these were the worst floods since 1995, or maybe since 1951, or, who knows, maybe ever. Then, we had a Christmas that many people wished might have been just a little less white.

Whatever the severity of individual floods, it appears that floods, like heat waves, are happening more frequently. Whether these were 50-year events or 100-year or even 500-year events, we have been seeing more of them, and they were severe enough that President Biden declared Whatcom, Skagit, and Clallam counties a federal disaster area. The frequency, as much or more than the severity, poses the question — can we blame climate change for the heat and the floods, or are they within the normal range of variation? Are they simply acts of nature, or have people created conditions where they are more likely to happen? How do we decide, and what do we do about it?

The Blame Game
Those who don’t like the term “climate change” prefer to speak of “extreme weather events,” and often blame them either on a capricious nature (or even a vengeful Creator), or on other people. Rural people blame urban growth, since it creates impervious surfaces that allow water to run off as well as heat islands due to the lack of trees in cities. Environmentalists blame farmers for constraining the waterways to narrow channels in order to create more agricultural land, or they fault loggers for cutting down the forests that absorb water and shade the land and the streams. First peoples blame settlers for all of the above.

To an extent, we are all to blame. Building a levee or paving a road or logging a forest makes the local ecosystem less resilient — less able to absorb shocks or disturbances like atmospheric rivers or heat domes and keep functioning the way they ought — protecting fish, fields, and forest, and protecting people from the effects of the rainstorms and heat waves.

At the same time, not farmers, not real estate developers, not loggers have caused the weather events. Weather attribution studies have shown that the heat dome of last June would have been “virtually impossible” without the warming of the earth’s atmosphere generally. We have had heat waves before, but never have we broken previous all-time records by 3 degrees Fahrenheit (as in Bellingham) to 8 degrees (as in Lynden and Sumas); this summer’s heat would have had less than a one-in-a-thousand chance of happening had the earth’s climate stayed what it was in the 1950s.

This is where climate change comes in. Climate science tells us that global warming doesn’t just warm the air so that hot spots are hotter than before and hot days are likely to happen more often. Also, as air warms, it can hold more moisture, so storms are more severe and there are more of them — they drench us with more water. We can’t necessarily say that our November storms would never have happened in last century’s climate, but we can say pretty certainly that storms of that intensity will happen more frequently in the near future.

Whatcom’s Part in Climate Change
Climate change is a global thing, of course, but that doesn’t get us off the hook here in Whatcom. We contribute to climate change along with everyone else, and we need to do our part to try to slow and eventually stop it, mainly by electrifying our buildings and transportation and generating electricity from clean sources, as our County’s Climate Action Plan stresses. But more importantly, we have reconstructed our local ecosystem to be less resilient to the climate changes that are going to happen even if we go “all green” by some arbitrary date in the near future.

Sumas was built in a basin that is liable to flooding — and thus more likely to be flooded as storms get more severe. Same with Ferndale, built near the mouth of the Nooksack River. Semiahmoo Resort is connected to the mainland by a spit that can be overtopped in a king tide. Whatever the original reasons for building in those places — economic and transportation convenience, proximity to fertile farmland, scenic beauty — these communities are now vulnerable to storms and flooding, and more dependent on flood control infrastructure. High levees along the Nooksack protect adjacent farmland, but those who now farm close to the river increasingly depend on the levees to keep their lands from flooding as the weather is changing and storms are becoming more frequent and more severe.

So we’ve trapped ourselves, not only by burning fossil fuels that warm the planet, but also by building artificial environments that make us more vulnerable to the effects of the climate as it changes. How do we deal with this? The ideal thing would be to go back to the sustainable ways our Nooksack and Lummi first peoples pursued for thousands of years before settlers came. But since that is impossible with 220,000 people here and more arriving yearly, we are faced with hard decisions. How do we make our physical environment resilient to the extreme weather events that are going to happen no matter what we do?

Building more and heavier infrastructure is ultimately a vicious circle; we put all our energy into maintaining the artificial environment that we have created. It’s better to have rivers that don’t rise than to have levees to try to contain the rivers when they do, but meanwhile, since we can’t bring back the natural floodplains immediately without severe losses, we will have to repair levees and maintain floodgates for the time being. Some form of water storage to fix the problems of drier summers might help in the short run, but we have to be careful to assure that it will work and won’t require further “fixes to fix the fix.” Planting trees is good, but we have to make sure we plant the right kinds of trees in the right places.

Now is the time to discuss specific measures, many of them recommended in the county’s 2021 Climate Action Plan. But the first step is to acknowledge that both climate change and unthinking development have led us to this predicament. Recognizing this, we can make plans to deal with it.

Stevan Harrell retired in 2017 after 43 years at the University of Washington, teaching anthropology, environmental studies, and Chinese studies. He and his wife Barbara moved to Bellingham and are now happy ‘Hamsters. Steve writes frequently about climate and environment issues, and is a member of Whatcom County’s Climate Impacts Advisory Committee.