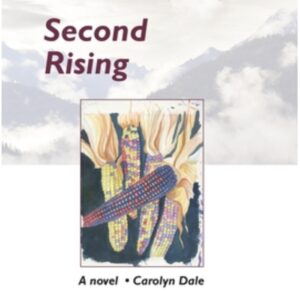 “Second Rising,” a novel by Carolyn Dale, Bellingham resident and emeritus Western Washington University journalism associate professor, is the perfect reading choice in these waning days of what Hopi elders describe as the 4th World.

It is a book written for today’s moment — and, whatever else, is definitely a candidate for any of Book of the Year awards.

Dale has created a story with a recipe for shaping human community for the 5th World, the one yet to come.

When Lauren Baker buys Lavender’s, a small farm-to-table café in tiny Quicksilver, a fictional town much like Glacier, on the slopes of Mt. Baker, she finds this bucolic corner of the Pacific Northwest is ridden with hidden dangers.

For one, it is at nature’s mercy, a town existing in the shadow of a dormant volcano in an earthquake zone, awaiting a big one, eruption or quake, or, more certainly, the effects of climate change. But, there are other more mundane dangers in Quicksilver.

Lauren discovers that her and her friends’ aspirations are threatened by the secret project of a billionaire baron and that even her own romantic interest is inextricably linked to that more expansive storyline — one into which Dale weaves threads of much of what is troubling the United States in this century: incipient racism, economic and gender inequality, unrestrained development, GMOs, private property rights, public land use, eminent domain, universal surveillance, grand juries, encroachment of outsiders, reckless mining, and locals locked in their old paradigms.

It is the story being played out today in real time, resistance of an enlightened few to the careless plunder of the natural world for personal gain.

The author lights a path forward for those who understand Mother Earth as a living entity and prescribes what they must learn, some say “re-learn,” if they are to align themselves with Nature and treat her with the respect she deserves.

This is not a call to new religion; it is a call to a new way of being that finds inspiration in the ancient ways, native ways, mythic ways, and in unorthodox communal ways. In other hands, the weight of this load might have overwhelmed the novel; in Dale’s, they are mere details, colors in the tapestry, strands woven into design carrying her narrative.

Cleverest of all is her tasteful use of food as metaphor, from planting and harvest to the plate –- the author’s personal mandala; her refashioning of myth as a gateway to a new consciousness; her revelation of the roles women take as actors in community, e.g., café and shop owners, farmers and, not least, the extraordinary Grandmothers Book Club; as well as her delightful band of wandering Tibetan monks — all pointing to a way forward.

Dale’s adoption of the yeast’s “work” in the preparation of daily bread, as the novel’s title suggests, asserts there is hope that this world, too, can recover from being flattened.

GlenLarum,anAustin,Texas-based novelist and poet, former newspaper editor and native of the Pacific Northwest, is author of “Waltz Against the Sky,” a Kirkus Best Indie Debut Novel for 2019. Walking 3 Bar T Publishing printed the award- winning novel and also Larum’s memoir, “A Longtime Gone” and his volume of collected poems, “Leaving Montana.”