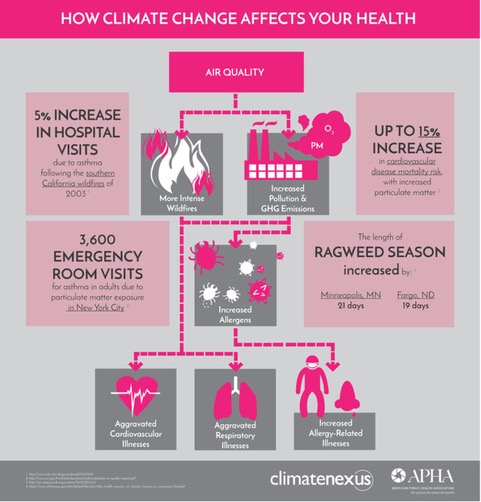 Our world now faces two interrelated and simultaneous public health crises: the coronavirus pandemic and climate change. With the global death toll from Covid-19 already over 350,000 in less than six months, and so many essential workers risking their lives every day to keep the rest of us safe, it is easy to forget about the second public health threat looming in the background. Yet, climate change and burning fossil fuels, which is the largest contributor to climate change, are also claiming lives every single day. (1)

Less than a year ago, the American Public Health Association and over 70 other public health and medical associations, including the American Medical Association, declared climate change “a public health emergency.” (2) Their “Call to Action” highlights that — without decisive action — climate change will continue to threaten global health long after the coronavirus pandemic is a distant memory. So, what can we do to reduce the risks of climate instability that will also help reduce the damage from the next viral pandemic?

First, let us consider how climate change is already affecting human health. On a global scale, the warming of the planet, rising sea levels, rising carbon dioxide levels, and more extreme weather events are creating conditions that threaten public health and cause loss of life. Over the past 20 years, our changing climate has caused at least 150,000 deaths annually, with deaths heavily concentrated in poorer countries. (3)

The build up of carbon dioxide, methane, and other greenhouse gases in the atmosphere contributes to deadly heat exposure, catastrophic floods, more intense hurricanes, and extended drought. (4) Changes in climate worsen cardiovascular disease, asthma, mental health problems, and diseases such as malaria and diarrheal disease. In addition, drought and other environmental degradation are causing forced migration, further compromising vulnerable populations. 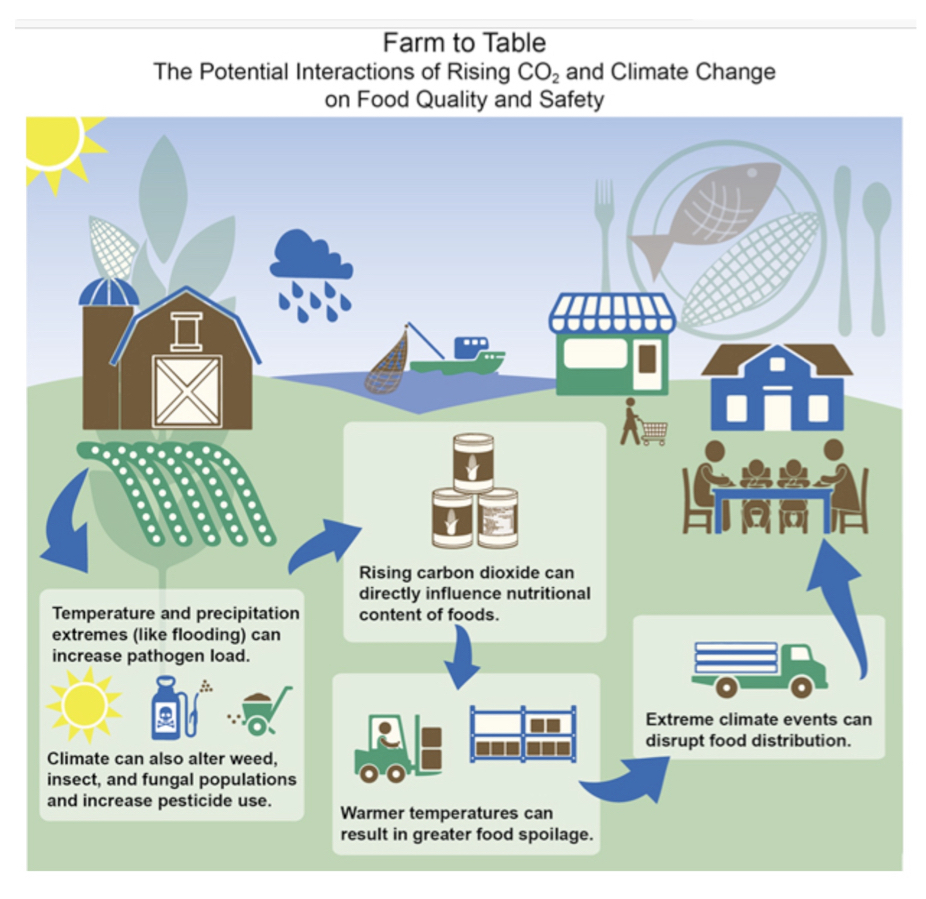 The food system involves a network of interactions with our physical and biological environments as food moves from production to consumption, or from “farm to table.” Rising CO2 and climate change will affect the quality and distribution of food, with subsequent effects on food safety and nutrition.
Source: U.S. Global Change Research Program

The World Health Organization expects climate change to cause approximately 250,000 additional deaths per year between 2030 and 2050, due largely to impacts on childhood nutrition. (5) According to the World Bank, undernourishment affects two billion people worldwide and climate change will make this condition “significantly worse.” (6) Studies show that rising CO2 levels in the atmosphere reduce the nutritional value of crops, including wheat, rice, barley and potatoes, by reducing their protein and mineral content. (7) Rising temperatures, drought, and flooding are expected to reduce the production of staple foods in many low-income countries. (8) Not incidentally, those are the countries, for the most part, contributing the least to climate change.

U.S. Climate Impacts
In the United States, the situation is somewhat different. Here, extreme weather events are taking a significant toll relative to other climate impacts. (9) According to a 2018 assessment by the Trump Administration, “The impacts and costs of climate change are already being felt in the United States, and changes in the likelihood or severity of some recent extreme weather events can now be attributed with increasingly higher confidence to human-caused warming.” (10) The report goes on to state, “Impacts associated with human health, such as premature deaths due to extreme temperatures and poor air quality, are some of the most substantial.” Air pollution is worsened by climate warming and by the burning of fossil fuels, which is a key driver of the warming trend. (11)

Two of the primary ways climate change is directly contributing to poor air quality in this country is by increasing the intensity of wildfires and lengthening the pollen season. These factors are aggravating cardiovascular disease, respiratory illness, and allergies, according to the American Public Health Association (see How Climate Change Affects Your Health at the top of this page).

Climate change is also increasing disease carried by nonhuman species such as mosquitos and ticks in the United States. Changes in precipitation, increased flooding, longer warm seasons, and changes in temperature have contributed to an increase in cases of Lyme disease and West Nile virus. Lyme disease cases doubled from 1991 to 2014 and climate change is partly responsible for increasing the range of ticks that carry the disease. (12) The mosquito that is largely responsible for Zika virus and dengue fever — diseases that are more typical in tropical countries — is also extending its range in this country. (13)

As the 2018 National Climate Assessment points out, climate change in the United States is disproportionately affecting older adults, children, communities of color, and low-income communities. For example, African American children are twice as likely as Caucasian children to have asthma and they are 10 times more likely to die of complications from asthma. (14) Many factors other than climate change are contributing to the disease, but African Americans are at higher risk in part because they are more likely to be forced by economic circumstances to live closer to sources of fossil fuel combustion, such as highways and industrial facilities.

Here in Whatcom County
In Whatcom County, climate change is impacting our health in a variety of ways. The increased frequency and intensity of fires in the Western United States and Canada has led to dangerous air quality episodes. Although air quality had been improving for many years due to restrictions on outdoor burning and cleaner-burning woodstoves, the major West Coast wildfires in the summers of 2017 and 2018 resulted in high levels of short-term particulate pollution. (15) Rising temperatures are increasing pollen counts, contributing to respiratory problems. (16) Warmer summers are making the elderly and outdoor workers more vulnerable to heat stress. (17)

Even if policymakers take bold action, Whatcom County will have more climate impacts in the coming decades. Climate scientists predict that, by mid-century, Whatcom County will have at least one extreme heat day per year versus none historically. (18) Summers will be both hotter and drier, making our region more hospitable to vector-borne disease, such as Lyme disease and West Nile virus, and more dangerous for vulnerable populations.

The Path Ahead
Journalists, public health officials, and policymakers are drawing parallels between the invisible threat of the coronavirus and the invisible threat of rising levels of heat-trapping gases in our atmosphere. In this time of global suffering, what can we learn to help reduce the damage to our health from both of these threats?

Benjamin Franklin said, “An ounce of prevention is worth a pound of cure.” South Korea invested heavily in preventing the spread of disease with a massive testing capacity, put in place when the virus was first identified in that country. It has paid off and meant that the country did not need to shut down much of its economy to avoid overwhelming its healthcare system. Regardless of the causes of climate change, it makes sense to rapidly transition away from burning fossil fuels.

Burning fewer fossil fuels can improve our health, making us more able to survive extreme weather events and viral infections. We can walk or bicycle more and drive less, reducing our risk of diabetes and heart disease. (19) We can accelerate the transition to renewable energy, combined with electrifying heating and transportation. Together, these actions can lessen climate change, reduce air pollution, and strengthen our immune systems. (20)

To help Whatcom County recover from a painful shutdown, while making us more resilient in the face of climate change and the next pandemic, our federal government could do two things: make substantial investments in renewable energy, and help ensure that workers in the fossil fuel industry are not harmed in the transition to a new economy.

The pandemic and climate change both highlight that we are all in this together, regardless of what kind of work we do. If healthcare workers get sick from lack of personal protective equipment, we are less likely to have someone to take care of us when we fall ill from the coronavirus or exposure to air pollution. If refinery workers aren’t helped to transition to other jobs as the world reduces its use of fossil fuels, our community will pay a price.

The pandemic and climate change are each high-probability, high-impact events. Michele Wucker, author of “The Gray Rhino: How to Recognize and Act on the Obvious Dangers We Ignore,” calls them “the 2-ton thing that’s coming at you, and most of the time we downplay it or neglect it. We kind of miss the obvious.” (21)

Thankfully, health care providers are bravely responding to the coronavirus pandemic and are also calling for more decisive measures to protect public health from climate change. Let us take heed of their call to action, as we work to recover from this pandemic and prepare for the next one.

4. For a concise explanation of how human activities are heating up the planet and disrupting ecosystems, see: https://climate.nasa.gov/causes/.

6. “Climate change and nutrition must be tackled together,” by Meera Shekar, World Bank Blogs, January 27, 2019: https://blogs.worldbank.org/health/climate-change-and-malnutrition-must-be-tackled-together.

7. “Vanishing Nutrients: It is a hazard of climate change you probably haven’t heard of,” by Elena Suglia. Scientific American, December 10, 2018: https://blogs.scientificamerican.com/observations/vanishing-nutrients/.

15. For the three-year period 2016-2018, Whatcom County received a failing grade for short-term particle pollution in the American Lung Association 2019 “State of the Air” rankings. See: http://www.stateoftheair.org.

16. “How climate change threatens our health in the Pacific Northwest,” by Ryan Blethen. The Seattle Times, September 19, 2019: https://www.seattletimes.com/seattle-news/environment/how-climate-change-threatens-our-health-in-the-pacific-northwest/.

17. The annual average temperature in Bellingham increased 2.8 degrees F in the past century. Data from: https://climate.washington.edu/climate-data/trendanalysisapp/.

David Kershner is a member of the Whatcom County Climate Impact Advisory Committee. He has done research for the Institute for Energy and Environmental Research in Maryland and Sightline Institute in Seattle. This is his first article for Whatcom Watch.