Let’s begin as a devil’s advocate.

What is it with the alarmists? The world is warming, but so what? The Earth has always warmed and cooled.

Why keep global warming under 2.0 degrees C.? For example, between 15 and 25 million years ago, long after the Paleocene/Eocene thermal maximum (PETM), it was still 2.5 to 3.0 degrees C. warmer. So, Antarctica and Greenland were ice-free, and yet mammals still roamed the Earth. We’re smarter. Can’t we just adjust and adapt? (See graph 1) 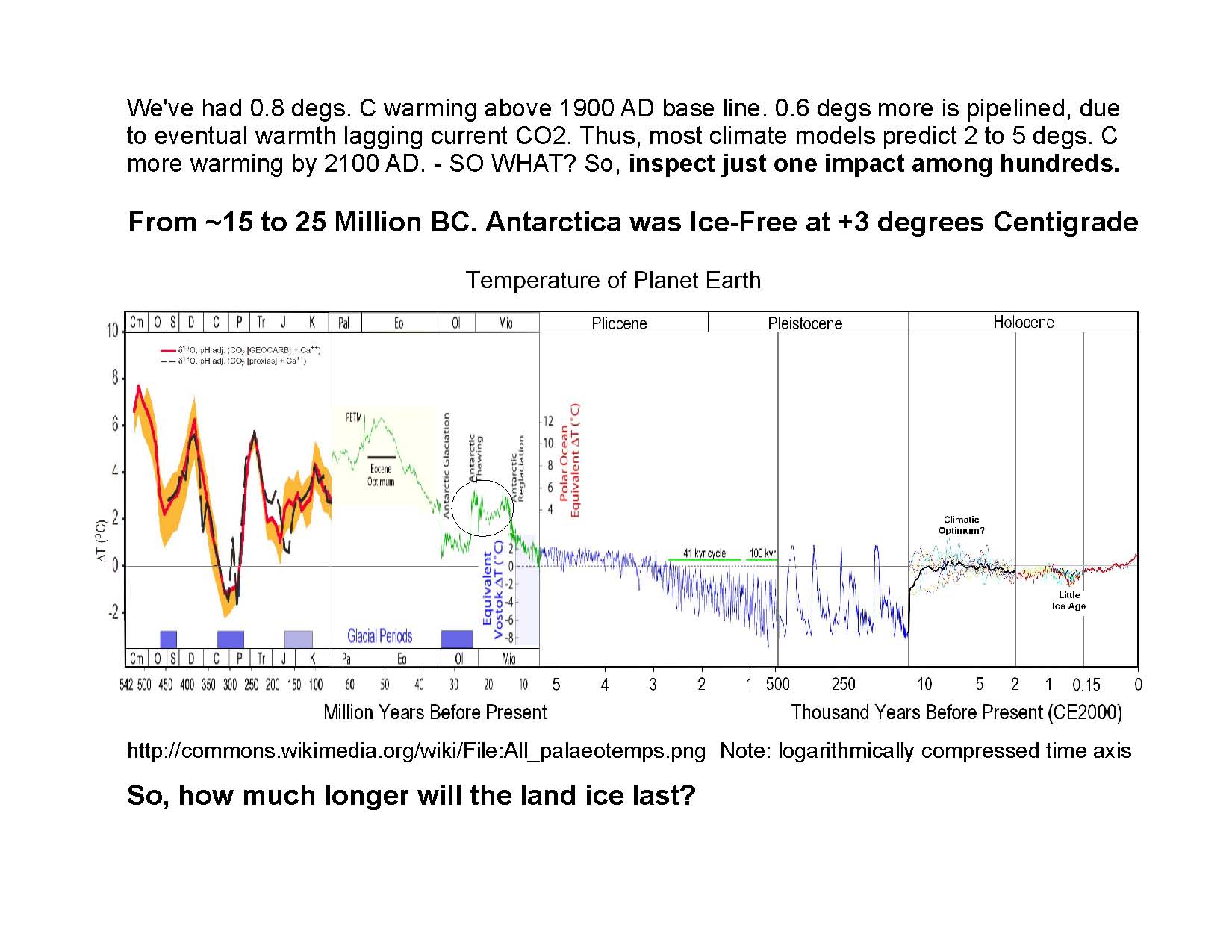 The last time we were over 2.0 degs C., Antarctica was ice-free.

Maybe. Then again, the PETM peaked at +5 degrees C. (10 degrees F.) warmer than it is now, and our current warming rate is 50 times faster than during the PETM. At that rate, can we still adapt? 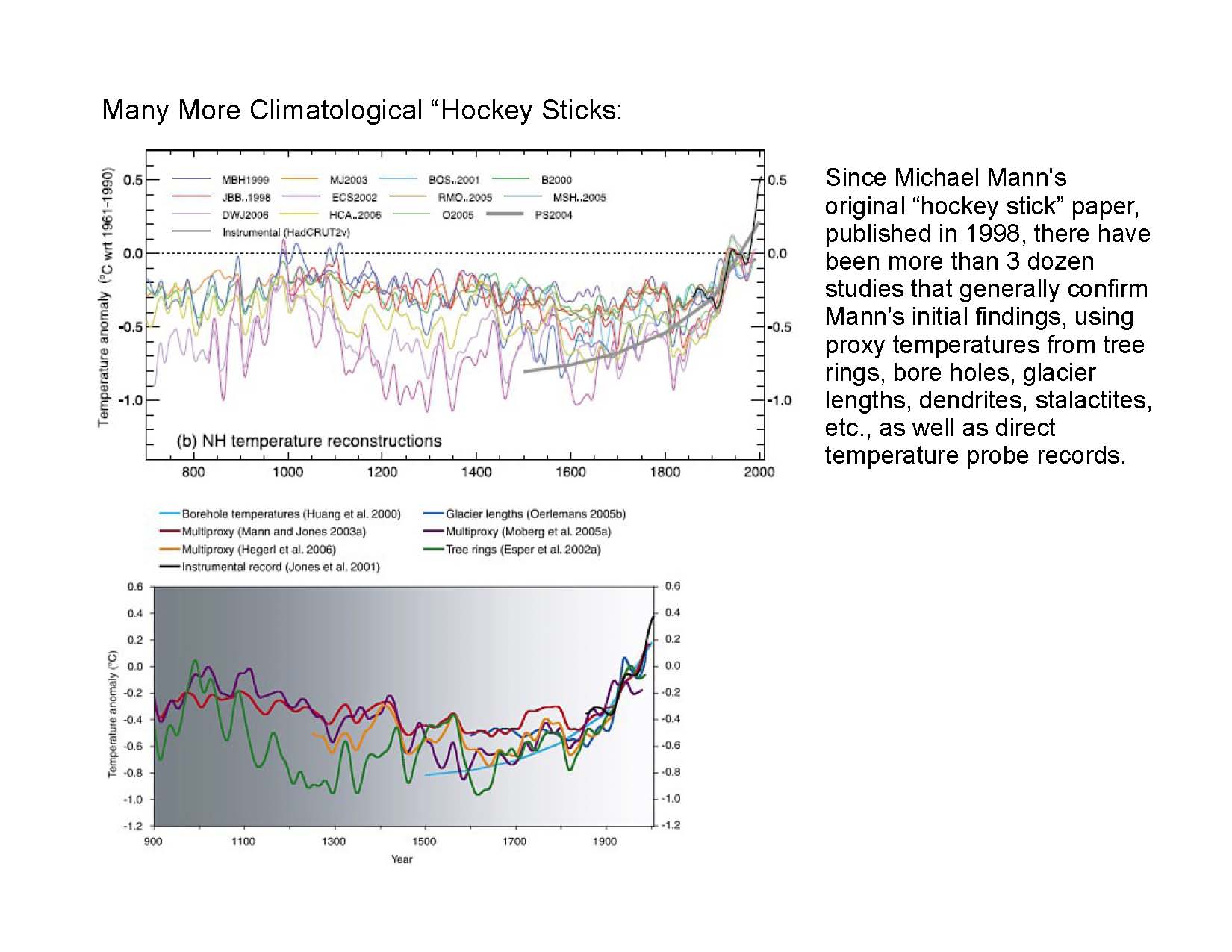 Meanwhile, our scientists’ best simulations, consistent with past warming episodes and based on steadily increasing CO2 and other greenhouse gases (GHGs), project continued global warming — that the Greenland and Antarctic ice sheets will eventually melt again, raising sea levels 230 feet — scary. But again, if our seas are now rising about 1/8th inch a year, complete melting would take 22,000 years, right? So, why panic?

The answer is: That calculation assumes wrongly that the pace is and will remain linear. Instead, 145 years of recorded sea level data shows that the rise rate has doubled almost five times, yielding a doubling period of perhaps 30 years. So, the rise, though still quite small, has been exponential, not linear. Extrapolated, this suggests that our local towns, along with Houston, Florida, the Mississippi basin, and the entire Eastern Seaboard, will all be submerged in less than 350 years. Locally, we might adapt. But 70 percent of Earth’s population lives within 100 miles of a coastline. Can we move nearly all of our coastal towns and cities 20 to 200 miles inland within 300 years? 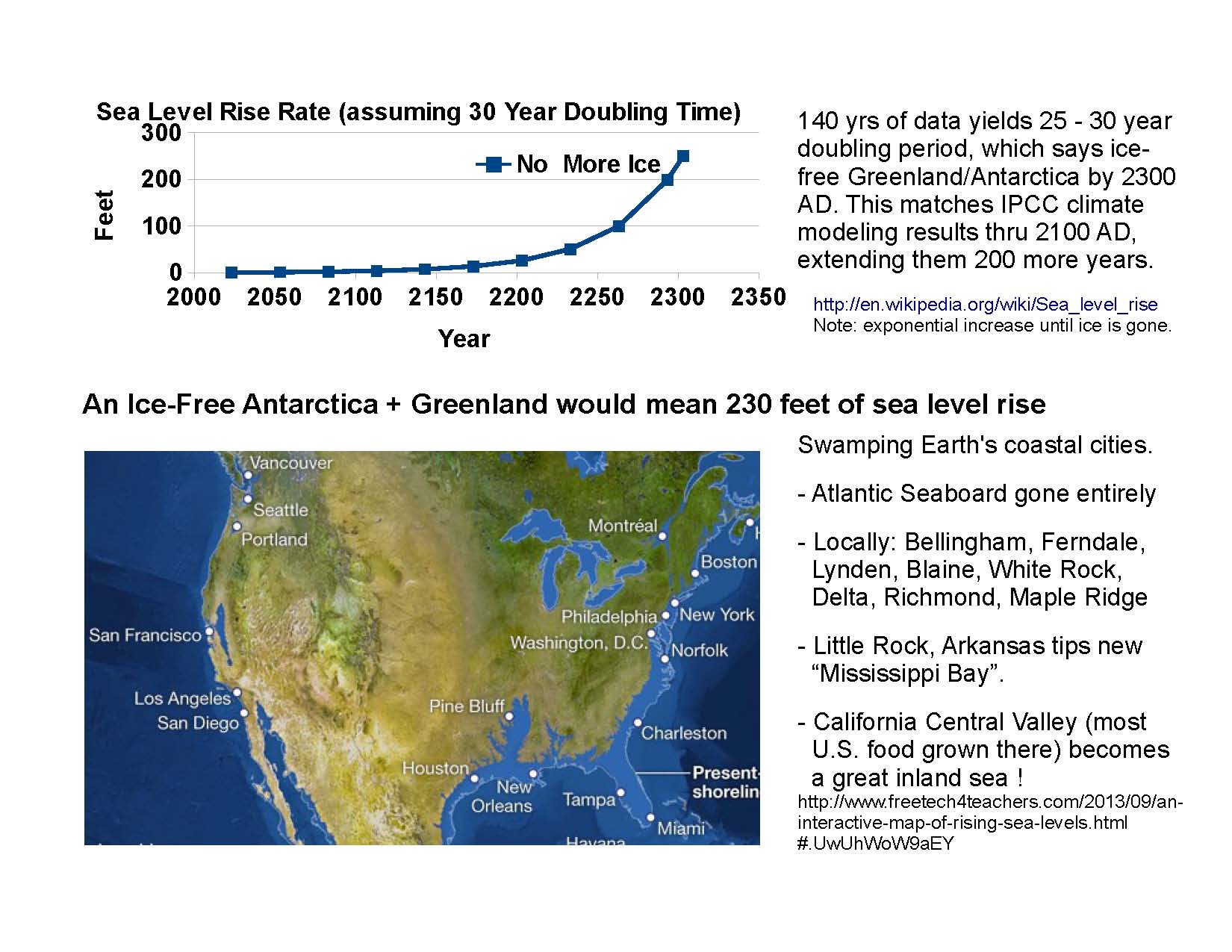 On the flip side, and again because the process is exponential, most of the sea rise won’t happen until the last 50 years or so, and it’s entirely possible that Palm Springs and Little Rock, Ark., could emerge as thriving seaports. Then again, storm surges will render most coastal towns uninhabitable long before they’re awash and asea. And terrain maps show that even 20 feet of sea rise, equivalent to the melting of Greenland’s ice sheet, would leave much of Fairhaven an island and swamp the Skagit Valley from Anacortes to I-5.

This brings up another often-ignored factor, “hysteresis,” defined as the lag between input and output. For example, we’ve had almost 0.9 degrees C. of warming above an A.D.1900 baseline. Yet, there’s another 0.6 degrees already baked in, because full warming lags current greenhouse gas levels. So, we’re really fooling with just a half degree margin before we hit the dreaded +2.0 degrees that some simulations suggest could happen within 20 years. No wonder climate scientists are alarmed. And they still project another 2 to 5 degrees C. warming, depending on how we humans respond over the next 100 years. Hysteresis enters again because, once warmed, further melting is also locked in. So, events like the Delaware-sized iceberg that broke off the Antarctic coast last July will occur more often, and there’s no way to stop it.

This article is way too short to address them all, but rising seas are just one of the many consequences of global warming. Climate modeling forecasts fiercer storms and storm surges, continued ocean acidification, fisheries depletion, drought, heat and agricultural crop stress, enhanced forest fires, arctic methane releases (another potent greenhouse gas), invasive species, and species migration/extinction, along with attendant projections for increased terrorism, mass human migration, plagues, and even nuclear war due to extreme geopolitical instability. Whole science conferences are devoted to each of these impacts, some annually.

These impacts are complex and often synergistic. For example, would the recent accidental release of 300,000 farmed Atlantic salmon into the San Juan channel have occurred if ocean waters hadn’t been increasingly acidified by excess, man-made CO2 that may have helped deplete Pacific salmon populations and boosted the market need for and profitability of artificial fish farming? Again, scientists in August 2017 proved for the first time that soot from Canadian wildfires floated almost 3,000 miles and darkened Greenland’s ice sheets, causing greater sunlight absorption, which increases melting and hastens sea level rise.

Is It Warming?
If so, is it due to Man-Made GHGs (greenhouse gases)?

It’s quite true that a lot of head-butting and ego-thrashing goes on at science’s bleeding edge. So, what starts as a plausible hypothesis grows into a credible scientific theory only after multiple scientists gather multiple sources and lines of evidence that support the same conclusion. That’s how science works.

The Japan Meteorological Agency, United Kingdom Meteorological Office and the U.S. National Oceanic and Atmospheric Agency (NOAA) and National Aeronautics and Space Administration (NASA) have tracked global surface temperatures for far more than a century, with satellites adding more data for about the past 40 years. Wrinkles like changes in sensor location, time of day of data collection, the change from ships’ intake ports to ambient bucket collection, and urban heat island effects have all been ironed out repeatedly. Yet, these independent data sets agree quite well, showing the same bumps and depressions, along with a general rise of about 0.15 degrees C. per decade. (see interactive graphics at http://www.woodfortrees.org/ .)

Then, in 2011 the Koch brothers helped fund Richard Muller, a Berkeley physics professor, to lead another comprehensive, critical review. Muller was openly skeptical of global warming and all prior temperature studies. The result? Muller testified to the Congressional House Science and Technology Committee: “We see a global warming trend that is very similar to that previously reported by the other groups. Global warming is real.”

A different line of evidence, satellite data, coupled with deep buoy studies, show that roughly 400 terawatts more energy (as radiation, the only significant form through deep space) enters the Earth’s atmosphere than leaves it. (A terawatt equals 1 trillion watts and is equivalent to 10 billion 100-watt light bulbs. In 2016, world energy use equaled 17.7 terawatts). They also show that our oceans absorb about 90 percent of the excess incoming energy. And the energy budget for the remaining 10 percent absorbed by land and atmosphere agrees roughly with the global warming measured by satellite and surface temperature sensors. It’s still rather noisy, yet every study thus far reports net positive incoming energy. The Earth is warming.

Are Greenhouse Gases Really Responsible?
It’s also true that a credible theory becomes robust, i.e., accepted as fact, only if it’s the last one standing after all others have failed to explain the available evidence.

In that regard, we also know that the sun isn’t causing global warming, because incoming solar radiation has fallen slightly, while outgoing thermal radiation has fallen faster. Also, the stratosphere has cooled while near-surface air has warmed. That’s a greenhouse gas signature, not a solar one.

It can’t be volcanoes, because man-made CO2 emissions exceed total volcanic CO2 (including undersea emissions) by more than a factor of 100. In fact, major volcanic eruptions tend to cool the Earth, because they spray dust into the stratosphere that partly blocks sunlight. The global temperature record shows quite significant cooling from about 1902 to 1915 following a series of five major volcanic eruptions.

It can’t be cosmic rays, because they’ve been steady for more than 30 years while the Earth has gotten hotter. And natural variation is highly unlikely, since all attempts to show large temperature changes due to natural cycles longer than the El Nino/La Nina cycle have failed. And no other plausible hypotheses, let alone credible theories, have emerged.

The Physical Basis of Global Warming
Physical objects emit thermal radiation. Anyone near a heated stove can see that the hotter it gets, the more thermal radiation it emits and at shorter wavelengths, from dull reddish brown, to cherry, to white hot.

We also know that CO2 and other atmospheric GHGs absorb and re-emit thermal radiation, thus partly blocking its escape to space. So, GHGs act as insulation that already keeps us about 33 degrees C. warmer than we would be otherwise. Here’s how the greenhouse gas effect really works.

However, the main GHGs have different kinds of atoms, in CO2’s case, carbon and oxygen. So, they’re polar (non-symmetric electron charge distribution). So, they absorb and re-emit thermal radiation. As GHG concentrations rise, thermal radiation from the Earth’s surface gets diverted more often, via multiple absorption and re-emission, before it can escape to space. Thus, the average height at which thermal radiation leaks to space rises. But the atmosphere is colder higher up and thermal emissions are weaker at colder temperatures. So, less energy escapes to space.

Besides credible theory, we also know from 40 years of satellite data that GHGs are driving global warming, which shows that the decreased outgoing thermal radiation has, not just the proper magnitude, but also a spectral signature that matches that based on our distribution of atmospheric GHGs.

Is the Increase in Greenhouse Gases Man-made?
Of the three carbon isotopes: 12, 13, and 14, most plants absorb carbon12 preferentially. And digging up and burning fossil fuels (dead plants) releases extra carbon12 that’s been isolated from the biosphere’s carbon cycle for millions of years. Precise monitoring has revealed falling global atmospheric carbon13/carbon12 ratios and falling oxygen levels, which together show that rising CO2 levels are mostly due to fossil fuel combustion.

Moreover, for the 10,000 years prior to 1850, atmospheric CO2 ranged from 260 to 282 parts per million by volume (ppmv), which showed that natural CO2 emissions from plant and animal decay, fires, biological respiration, and geological weathering were being absorbed by natural processes including photosynthesis, shellfish shell formation, and burial. But when we began burning fossil fuels, CO2 levels rose to 400+ ppmv, now rising about 2.3 ppmv per year. We also know, based on global carbon inventories, that we emit about 4.5 ppmv (36 gigatons) of CO2 per year, twice the current rise rate.

This says Earth still absorbs not just all natural CO2 emissions but also about half the excess, man-made CO2. The historically recorded rise in CO2 is, therefore, conclusively wholly man-made.

Wait! Water vapor is the main GHG and it isn’t mainly man-made.

Our final bullet point: It’s true, compared to CO2’s 400 ppmv or 0.04 percent, that water vapor at ~1 percent of sea level atmosphere is far more plentiful and thus a stronger GHG than CO2. But water vapor can’t induce any global warming by itself because it’s been shown that global water vapor levels can rise and fall rapidly, but only with temperature. So, it takes other rising GHGs, mainly CO2, to drive a modest temperature increase, which in turn evaporates more water from surface waters, which then raises global temperatures a lot more.

How We Know It’s Warming and Man-made
As theories go, climate change via man-made global warming is now regarded as credible, robust and an accepted fact among 97-98 percent of climate scientists, with supporting statements from all 160 national and international science academies and organizations. There is one lone equivocator: the American Association of Petroleum Geologists. That strong consensus extends to the U.S. Dept. of Defense, all major oil companies — except for Arabian-American Oil Co. — and the major insurance carriers.

Ray Kamada, received a Ph.D. in Atmospheric Science, from the U. California, Davis, in 1985. He has been a peer reviewer for Solar Energy Journal, 1981-1986; was a National Research Council Postdoc, 1986-87; Adjunct Assistant Professor and Environmental Physics Group Leader, U.S. Naval Postgraduate School, 1988-1993; and a private consultant for the U.S. Dept. of Defense, 1993-2008, specializing in air pollution theory, atmospheric mesoscale modeling and field research. He was a visiting scientist at the RISOE National Laboratory of Denmark/Danish Technical University, 1986- 2014; editor/peer reviewer for the Journal of Renewable and Sustainable Energy, 2010-2015, and for Kamada Science & Design, 1993-2017. Also, manager/cellist for the Protea String Quartet, 2010-2017.