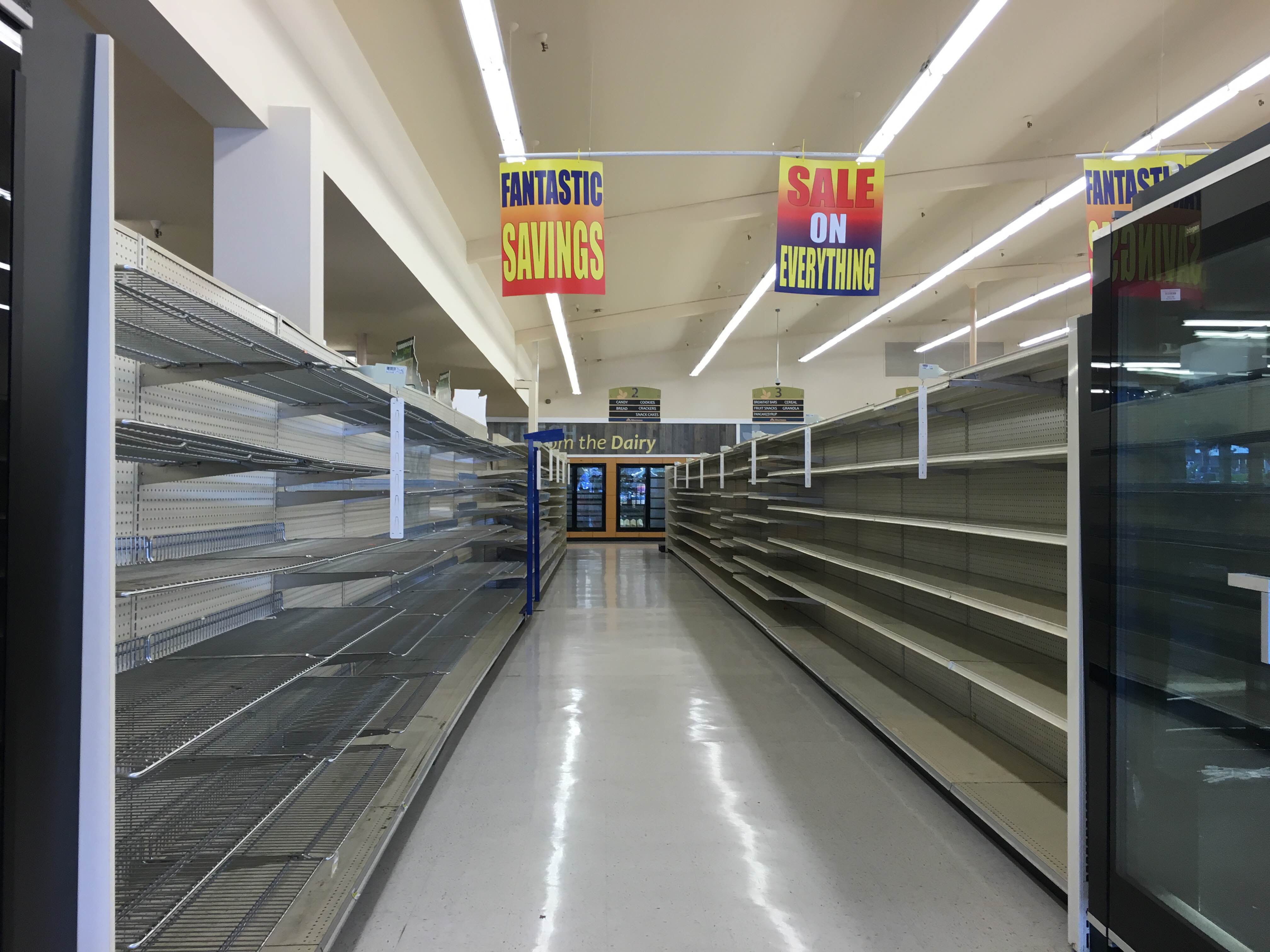 Walking inside a corner store on a recent day, browning bananas are two for $1. No burger meat but plenty of beef jerky and soda. No produce. The little store has microwavable burritos and an assortment of candy. Not the makings for a healthy meal, but it’s what’s available now in the Birchwood and Alderwood neighborhoods.

Since the nearby Albertsons closed May 7, 2016, residents have been stripped of access to fresh vegetables, meat and most dairy. By official designation, these neighborhoods now constitute a “food desert.”

Urban residents, with limited access to transportation and typically low-income, living more than one mile away from a grocery store, qualifies the area as a food desert, according to the U.S. Department of Agriculture. The definition also extends to rural areas for those who live more than 10 miles from a grocery store.

What this means for many of the neighborhoods’ lower-income families and individuals with limited access to cars is that they will now have to find some way to get to another grocery store. For some, it might mean fewer trips and less nutritious food. For children, food insecurity can lead to asthma, birth defects, aggression, anxiety and oral health problems.

Food insecurity for adults has been linked to mental health problems, diabetes and hypertension, according to the study, “The Prevalence, Depth, and Severity of Food Insecurity in the United States from 2001 to 2013.”

For some, like Birchwood resident Susan Edwards, grocery shopping has now become inconvenient. “Albertsons was the store people walked to. With it now gone, I am making longer trips around the city,” she said. “Families with limited paychecks are the people who will be most affected. In a community who wants to be green and neighborhood-centric, Albertsons’ moving is a big blow, because people will have to travel farther to get groceries.”

This food desert is the largest in Bellingham and is bounded by Squalicum Parkway to the south, west of Meridian Street, and stretches to West Smith Road up north. The Alderwood and Birchwood neighborhoods are at the center.

Albertsons’ closure has left a few locations still selling some food in the area, such as 7-Eleven, Big Lots and Rite Aid. The closest grocery store, Fred Meyer on Bakerview Road, is 1.8 miles away. Convenience stores carry snack foods and a few perishables, such as milk and eggs, but have limited supplies of fresh produce and meats.

Not everyone needing easier food access is able bodied, Bellingham Mayor Kelli Linville said. “Walking or riding a bike are not convenient ways to get food. If the [USDA] is saying if you’re within a mile, you’re okay — those people are not okay. I don’t care what they say.”

The Closure of Albertsons
Albertsons opened in the Birchwood Neighborhood in 1960. In 1982, the company created a no-compete clause for its location in the Small Shops of Parkwood Manor that states no other supermarket can open there until 2042, said Parkwood manager Rogan Jones.
Since Albertsons owns the building, the clause allows them to deny a grocery store access to purchasing the space, he said.

Melissa Morin, Community Health Specialist for Whatcom County Health Department, said square footage defines a supermarket or grocery store. If a neighborhood has a convenience store or farmer’s market, but no supermarkets, it remains a food desert, according to the USDA’s definition.

“Albertsons is killing this neighborhood in order to dominate the grocery business in Bellingham. They will not allow a grocery store to open in this space in order to reduce competition,” Jones said. “They are creating a food desert.”

Albertsons purchased Haggen in the past year, and owns Safeway stores as well.
Letters have been written back and forth between Albertsons and Jones. They told him the closure was for competitive reasons, Jones said.

“Any decision to close a store is only made after long and careful deliberation. Albertsons evaluated this store extensively and examined numerous options to improve its performance,” said Albertsons’ Seattle Division media contact, Sara Osbourne, in an email. “Ultimately, our business analysis indicated that there was no alternative other than to cease operations in Birchwood.”

Jones said he was shocked when he learned about the closure of Albertsons and hopes the city will work to change the agreement.

“The property was meant to be a grocery store,” Jones said. “[Albertsons] could modify the clause, [or] they could sell or lease the store to another grocer, but they denied it.”

The City’s involvement
Mayor Linville is aware of hunger problems affecting lower-income residents, she said. The recent closure of Albertsons and its no-compete clause has the city struggling with ideas to bring in another grocery store, Linville said.

“This incident with Albertsons is different because it affects so many people all at one time,” Linville said. The city can’t force Albertsons to allow a grocery store to go in, Linville said.

A meals-on-wheels program exists, bringing food to those who can’t travel to the grocery store, but it’s mainly for the elderly, Linville said. “It’s difficult when you know you’re the mayor, and you can’t come up with all the solutions because the problem is not simple, and there are not unlimited funds,” Linville said.

The problem is the number of people living below the average-mean wage, which has risen because of the availability of family-wage jobs and the lack of affordable housing, Linville said.

“When you look at what people need in our community, food is not at the top of the list — health care, dental, mental health, drug and alcohol treatment and housing — we have other things that are harder to come by than food, [and] in some ways that makes me feel better,” Linville said. The city contributes about $8 million per year to organizations providing services such as food and housing, Linville said.

Schools in the Neighborhood
Schools within the food desert, such as Birchwood Elementary, Shuksan Middle School and Alderwood Elementary, have the highest percentages of children with free or reduced lunch.

The Alderwood Elementary free and reduced lunch program is used by 80 percent of students, the highest percentage in the city, compared to the Bellingham School District average 37.3 percent.

Both the Alderwood and Birchwood schools have seen rises in families needing food assistance over the years, said Mike Cohen, executive director of the Bellingham Food Bank.

In the Birchwood neighborhood, about 1,200 children up to the age of 17 live a mile or more away from a grocery store, according to the Food Access Research Atlas created by the USDA.

The population of Birchwood is roughly 10,000, of which about 8,400 are more than one-half a mile from a grocery store. About 3,000 people are considered low-income with limited transportation and funds, leaving them vulnerable given the newly increased distance from food suppliers.

Transportation issues
Lack of transportation is a barrier in food access, according to Whatcom County’s Health Impact Review for 2014. The report states lower income households are more likely to have fewer vehicles. Households on tight food budgets face tough choices: food or rent.
Rick Nicholson, director of service development for the Whatcom Transit Authority, said the bus stop outside of Albertsons has an average of 618 people boarding and getting off every day.

The Bellingham Food Bank started the Alderwood Mobile Food Bank in 2015. The truck supplies food for 60-70 families every Thursday, Cohen said. “Even with the food bank right there, people have no way to bring 50 pounds of food back with them, either on the bus or walking,” Barker said. “A lot of those services go untapped or unused.”

The WTA does not have a policy on bringing groceries on board, Nicholson said. However, larger items do cause safety concerns when they take up the bus aisle. If Birchwood residents use the bus to go to Fred Meyer, about 1.8 miles from Birchwood’s center, the route 232 runs once an hour, Nicholson said.

The nearest bus stop to Fred Meyer is down the road from the store, leaving riders with a quarter-mile walk after they get off the bus. And a quarter-mile back carrying their bags of groceries. “People are starting to notice how it’s impacting them. They didn’t realize how many times they just went [to Albertsons] to grab just one thing,” Barker said. “They don’t want to drive all the way to Haggen, and these are people with cars.”

Addressing Hunger Within the Community
A community garden in the Birchwood neighborhood is gated next to Faith Lutheran Church. Food like bok choy and carrots are being grown in preparation to be served to the community. The church began the garden in 2011 as a way to bring a farm-to-table approach to the neighborhood; where a lot of residents have no land or access to space to grow their own food.

“The idea of the community garden was something that many people were interested in here,” Twigg-Harris said. “Originally when we built it, we did research on the neighborhood. We began to talk and figure out how to use the piece of land so the community could use it.”

The community garden has changed in her time on staff, Twigg-Harris said. “Hunger is the scariest thing and isn’t something you could just put off until next month,” Twigg-Harris said. “We often talk about the term food security here, and I think the term is important because it is about high-anxiety, and you are worrying about your children being malnourished.”

Twigg-Harris thinks Albertsons’ closure affecting the meal program should not be ruled out, she said. She expects to see more families because of the scarcity of food in the area.
“It’s probable this is the only meal people are eating today, and we try to make it a big, nourishing meal with five to six dishes,” Twigg-Harris said. “They aren’t going home to eat a bunch. This is their food for the day.”

Each week, about 1,200 Bellingham residents visit the Bellingham Food Bank, Executive Director Cohen said. Most people visiting the food bank make around $1,000 a month, leaving no room to buy food after paying rent, he said. The numbers doubled in the past year, he said.

In the summer season, produce is provided by local farmers. During the winter, the food bank receives shipments from Food Lifeline, the regional program of Feed America saving food to distribute to food banks and hot meal programs.

Arnold Smith, a 62-year-old homeless man, uses Maple Alley Inn’s meal program.
Smith spends his days using the bus to get to his next meal, he said. Because many hot meal programs don’t operate on weekends, Smith travels as far as Lynden.
“I’ve had two strokes, so eating poorly is not good for me,” Smith said.

One in five Washington residents relies on their local food bank, according to Northwest Harvest. If you are an individual dealing with hunger, contact Food Lifeline at https://foodlifeline.org/need-food to use its local food services map.

Christian Conahan is a journalism and cultural anthropology double major at Western Washington University. He grew up in Edmonds, Washington, and plans on pursuing careers in children’s book writing, anthropological studies and documentary making after graduating in August 2016.

Janae Easlon is a journalism major focusing on gender studies and minoring in international studies at Western Washington University. She grew up in Vernonia, Oregon, and plans on pursuing a career as an international correspondent after she
graduates June 2017.

Elizabeth Kayser is a journalism major focusing on sociology and minoring communication studies at Western Washington University. She grew up in Lynden and plans on pursuing a career in investigative journalism and documentary making
after graduating in December 2016.