Beautiful Scale Mosses and Their Kin 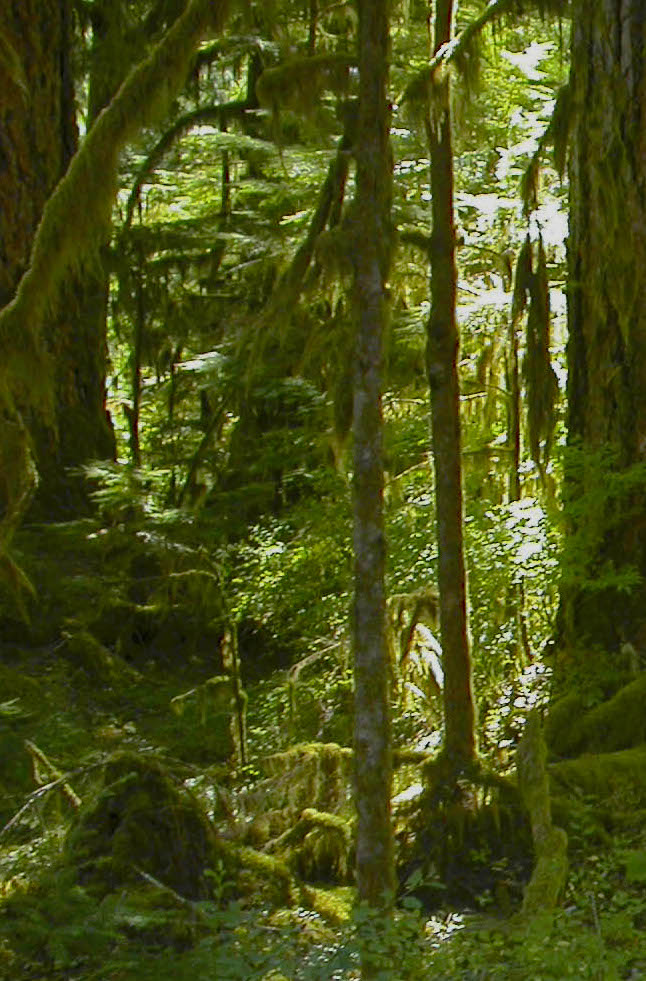 One group of cryptogamic plants which deserves closer attention is the group of bryophytes known as liverworts. They live all around us, usually unrecognized. Like the other bryophytes (mosses and hornworts), liverworts are true plants but they lack the vascular tissues (piping systems for food and water) found in ferns, conifers, and flowering plants. Like all bryophytes, liverworts can’t pull up minerals through roots, but subsist solely on what falls on them, along with the food they make by photosynthesis.

Like the mosses, liverworts love dank forests and areas that are wet, at least part of the year. I discussed the life cycle of a common local moss in my piece, “It Takes Two to Tango” in the August 2020 Whatcom Watch and you might review some of the terminology there. Liverworts have the same life cycles where the plants alternate phases between gametophytes (wet-loving, sex-cell producing plants) and sporophytes (dry-loving, spore producing plants).

Liverwort sporophytes are much simpler than those of mosses and, if you can find them, this phase will allow you to easily tell the difference. Unfortunately, they have quite short lives in comparison to the moss sporophytes. The sporophyte consists of a round sack (sporangium) at the end of a simple, stem-like seta. Some, like those of Porella, are constantly appearing, maturing, and releasing spores so you can find them through much of the year if you look. Others, like the sporophytes of Lophocolea and Marchantia, don’t appear often and, when they do, are ephemeral.

If you have ever been introduced to liverworts, it was probably to a common, thallose liverwort, Marchantia. Thallose liverworts, like lichens and seaweeds, have “thalli.” A thallus is a plant-like body without roots, stems, or leaves. I’ll discuss Marchantia at the end of this piece. An even more common group of liverworts have leaves and stems and are known as leafy liverworts or scale mosses. These are exquisitely beautiful (with a hand lens) and are quite common but, as one of the common names suggests, if they are seen at all, they are thought to be mosses.

Leafy Liverworts (Scale Mosses)
Some folks look forward to seeing the first Trillium or other early spring flowers as beautiful reminders that the days are longer and warmer. I look forward to seeing another harbinger of spring, the early sporophytes of Lophocolea cuspidata, aka cusped crestwort. The leafy gametophytes are always around us and very distinctive when looked at closely with a hand lens (Figure 1). Their leaves are delicately sculpted and arranged like little flags along the stems. 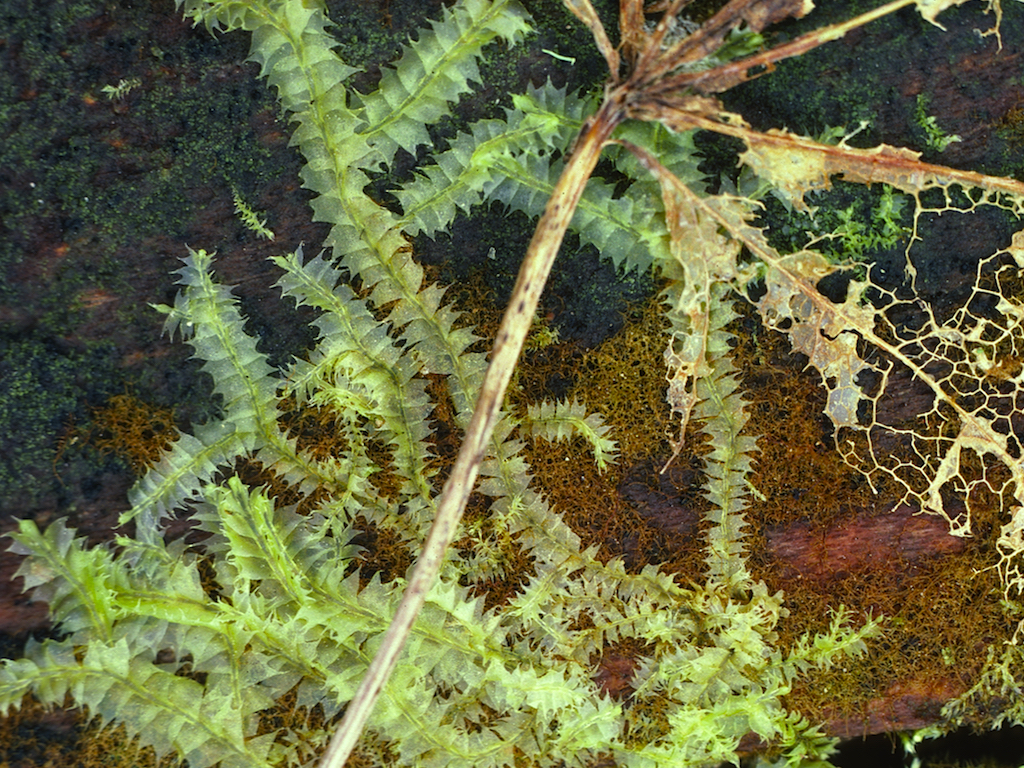 Two features separate scale moss gametophytes from moss gametophytes. Firstly, in scale mosses, two ranks of leaves are arranged on opposite sides of the stems so the plants overall are quite flat. If a third rank is present, the leaves in it are much smaller and usually lie underneath the stem. The larger leaves often give the plants a very reptilian, scaly appearance. Except for just a few, relatively uncommon species, all mosses have leaves spirally inserted onto their branches. The leaves might look two-ranked, but, close examination of their bases with a hand lens will show you that their bases are not. Secondly, when examined with a hand lens, scale moss leaves never have thickened midribs — these commonly occur in the leaves of mosses. 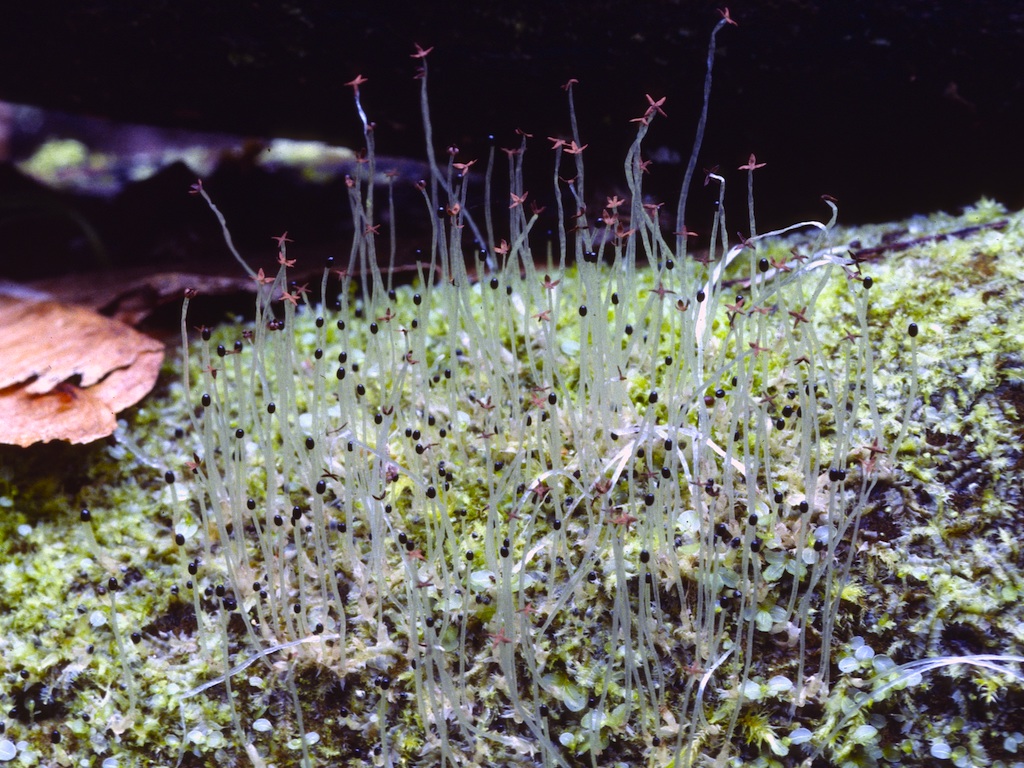 In late winter or early spring on warming days after a rain, the sporophytes appear, literally overnight, shed their spores, and then they are gone. The setas of the sporophytes appear as tiny, rice-noodle-like hairs on the tops of logs and stumps (Figure 2) and most people seeing these likely think it is some sort of fungus growing there. The sporangia develop slowly in late winter as dark spheres nestled down among the gametophytes. When the conditions are right, the setas elongate quickly and the capsules open. Take a closer look at these and you will see all stages of sporophyte development and the beautiful gametophytes.

Tree Ruffle Liverwort
Now let’s look at another local species, Porella navicularis, aka tree ruffle. This is extremely common in the lowland hardwood forests of western Whatcom County. It is nearly always present as part of the assemblage of bryophytes on the branches understory trees like vine maple (Figure 3) and lower trunks of older trees. 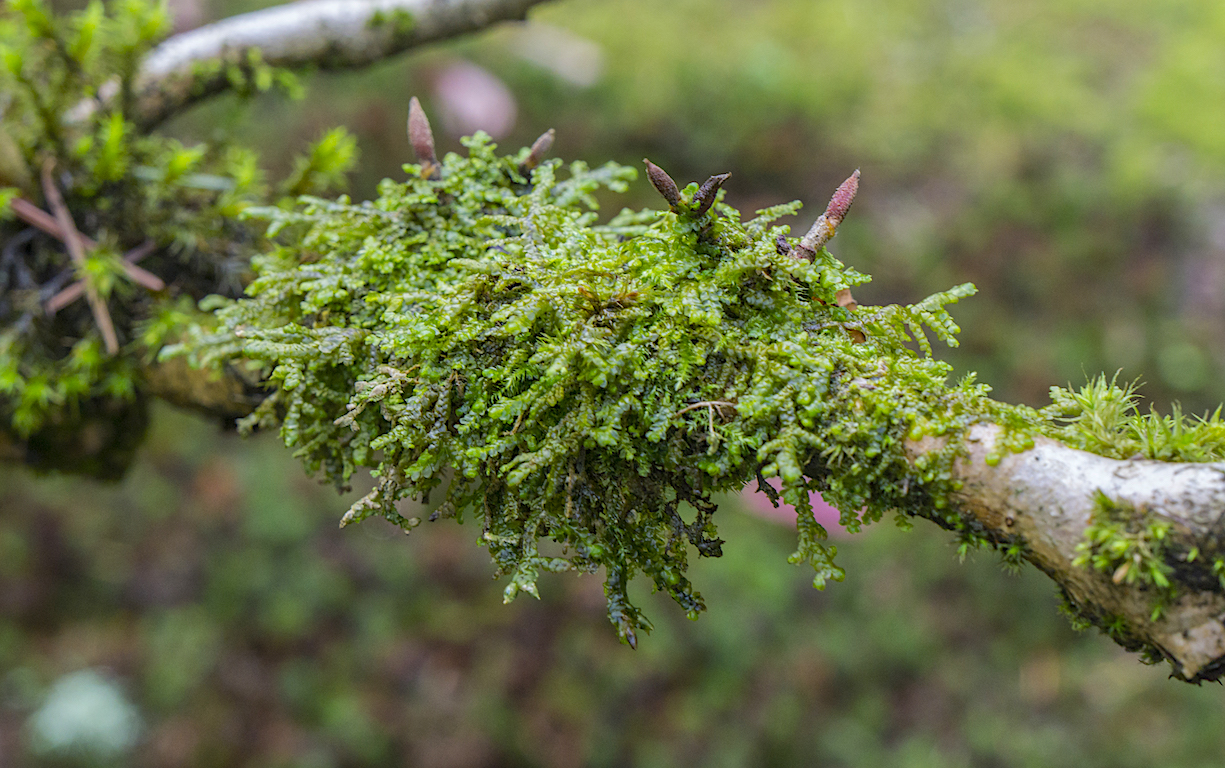 Like Rhizomnium glabrescens, the moss discussed in the August 2020 column, Porella gametophytes come in male and female versions. The male gametophytes (Figure 4) have short side branches that look like little rattlesnake tails. Within these are the organs that produce sperm. 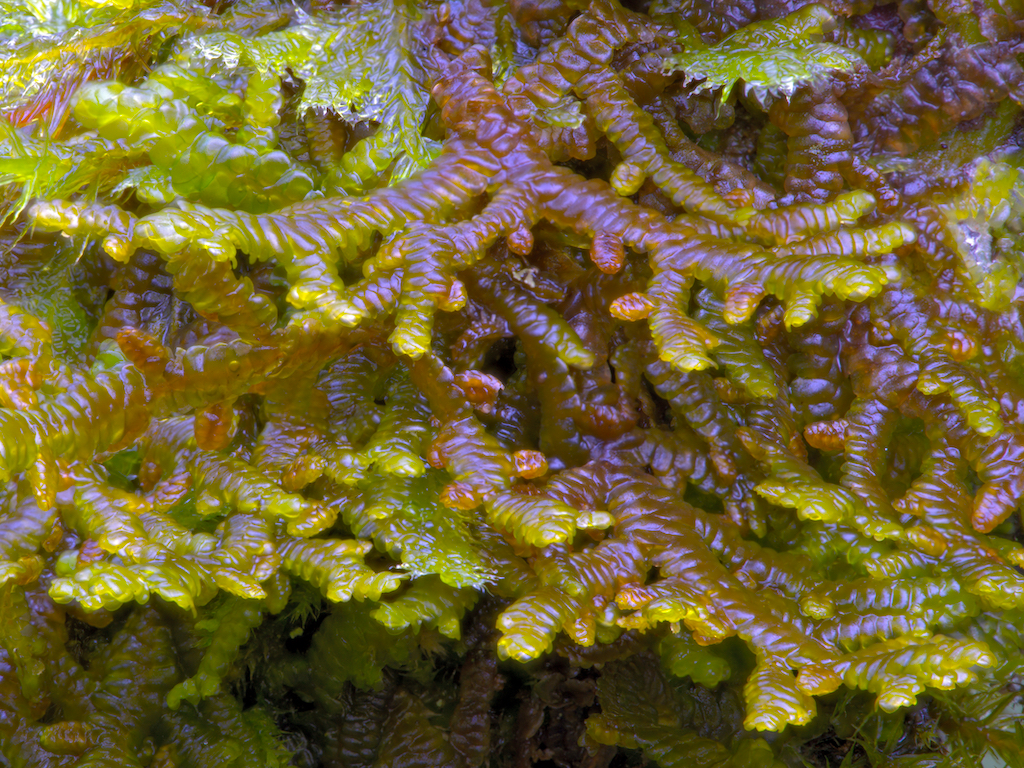 The female gametophytes (Figure 5) look much the same as the males, but they lack the short side branches. Instead, you will find occasional swelled leaves out of which the sporophytes appear. 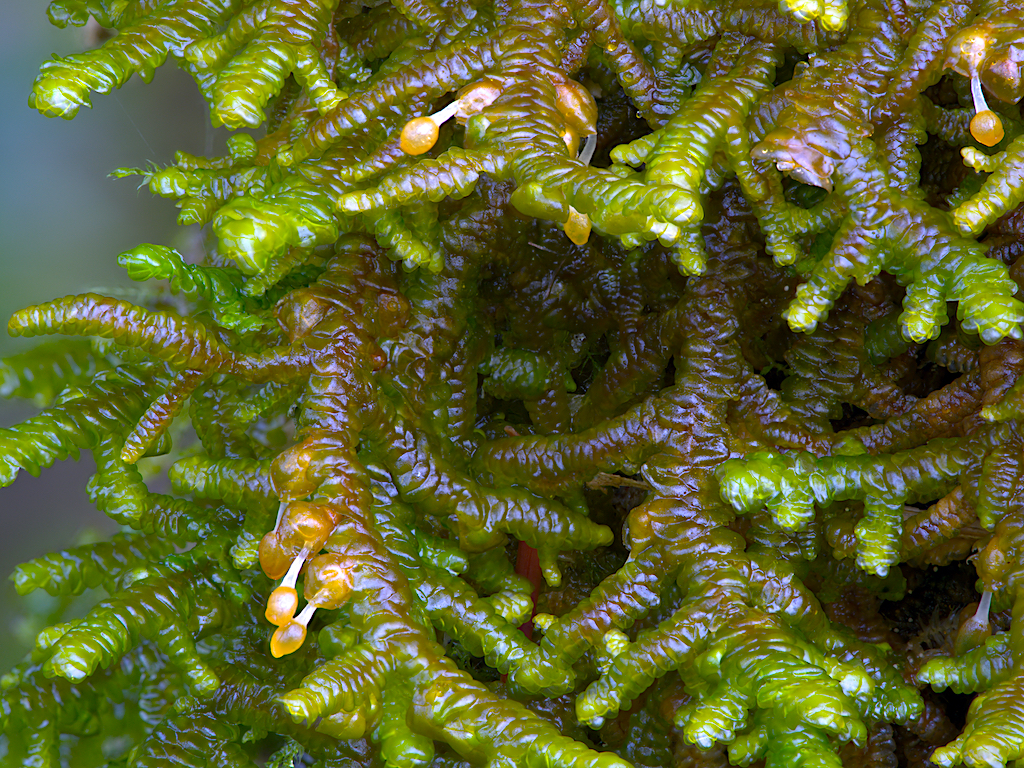 The sporophytes of Porella begin to be seen as dark balls buried in their protective leaves. Once the spores are mature, the seta (sporophyte stem) extends just slightly, and the terminal sporangium spits open into four lobes. Sporophytes in different stages of development are often seen on the same female gametophyte. Inside the spore sack, spores are produced along with special, spirally thickened, elongate cells called elaters. As the elaters dry out, they move around and loosen the spore mass, so spores are shed individually (Figure 6). 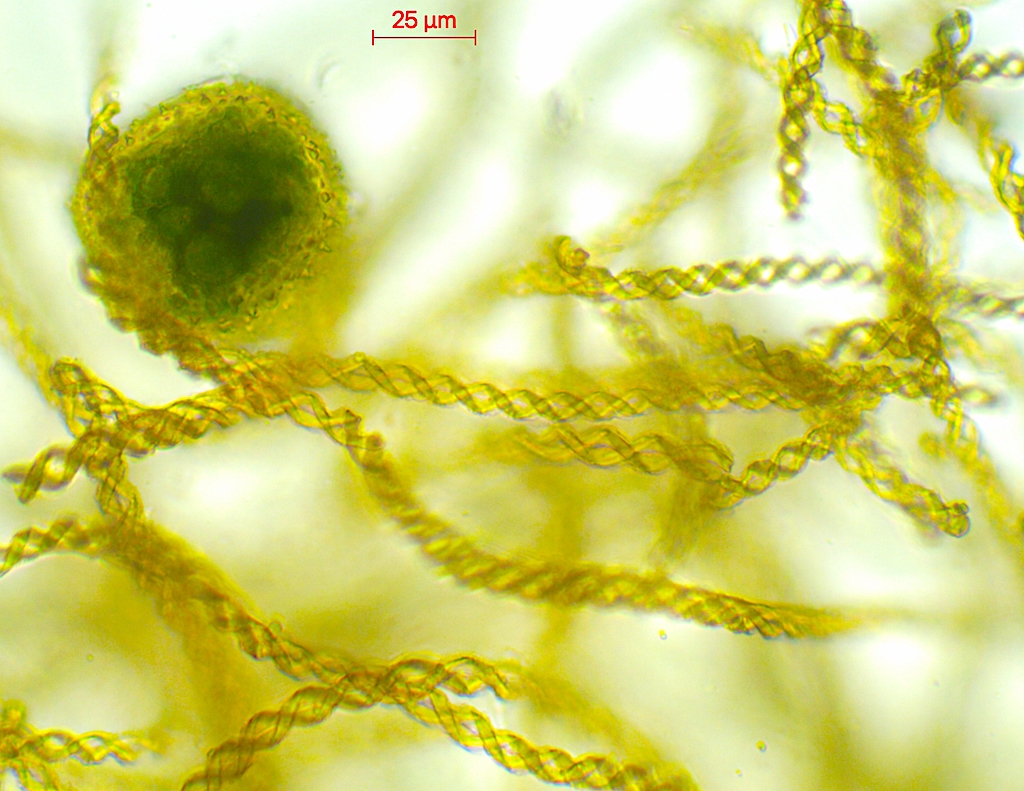 Lophocolea and Porella are just two of a great many other scale mosses which you can find in Whatcom County habitats. They vary considerably in the exact sculpturing of their leaves and their appearances from a distance. Examine what you think are mosses carefully with a hand lens and you may find some interesting scale mosses.

A Thallose Liverwort
Finally, let’s talk about the thallose liverworts. One of the most common is Marchantia polymorpha, aka lung liverwort. This is a common garden plant that creeps along fresh soil and, in a couple of months, can cover a garden bed. It also occurs in wild habitats here, usually where the soil has been disturbed. In a garden it can become weedy, but I always like to see it as it is so cleverly built to accomplish the bryophyte life cycle.

Marchantia has several structural adaptations that make it particularly successful. Marchantia gametophytes are thalli; that is essentially, they are all leaf (Figure 7). They are attached to the soil by hair-like rhizoids, but these function only as anchors, not actively absorptive roots. If you look closely at the photo, you will see that the upper surface of the thallus is minutely spotted. These are the entry pores into air pockets within the thallus. The air pockets are an adaptation allowing Marchantia to remain moist while continuing to photosynthesize more efficiently. 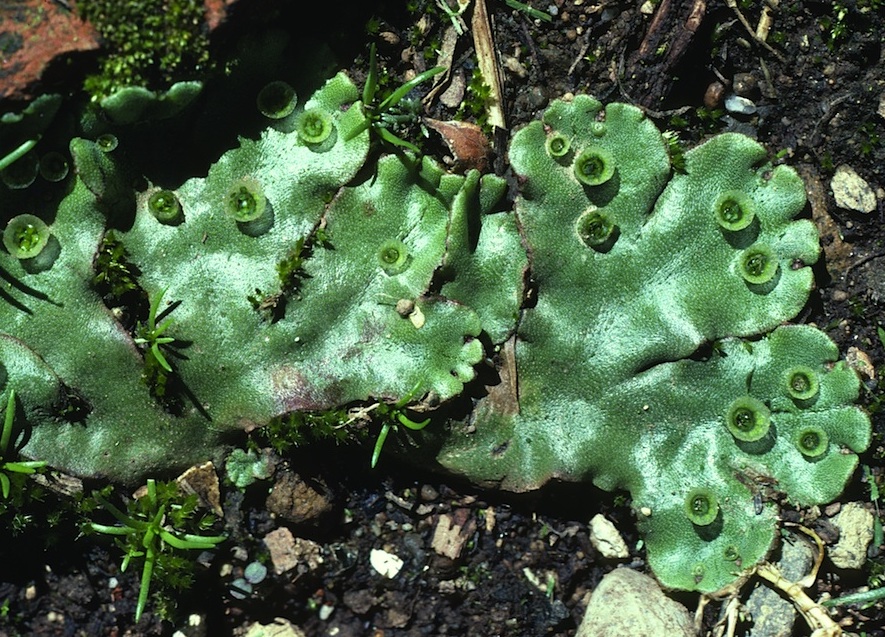 Early in the growth of the gametophyte, the plant produces little structures known as gemmae cups that function in asexual (cloning) reproduction. Within each cup are scaly pieces of gametophyte (gemmae) which easily break off and are splashed out of the cup by raindrops. A splash could easily take a gemma a foot or more away from the thallus, where it will rapidly grow into a clone of the parent, thus rapidly spreading gametophytes to fresh soil.

Later when the gametophytes are older, they begin to form sex cells. Like Porella, there are male and female gametophytes, and each goes about its business in its own way. Male plants produce little inverted-umbrella-shaped structures (Figure 8). The sperm-producing organs are embedded in the tops of these. 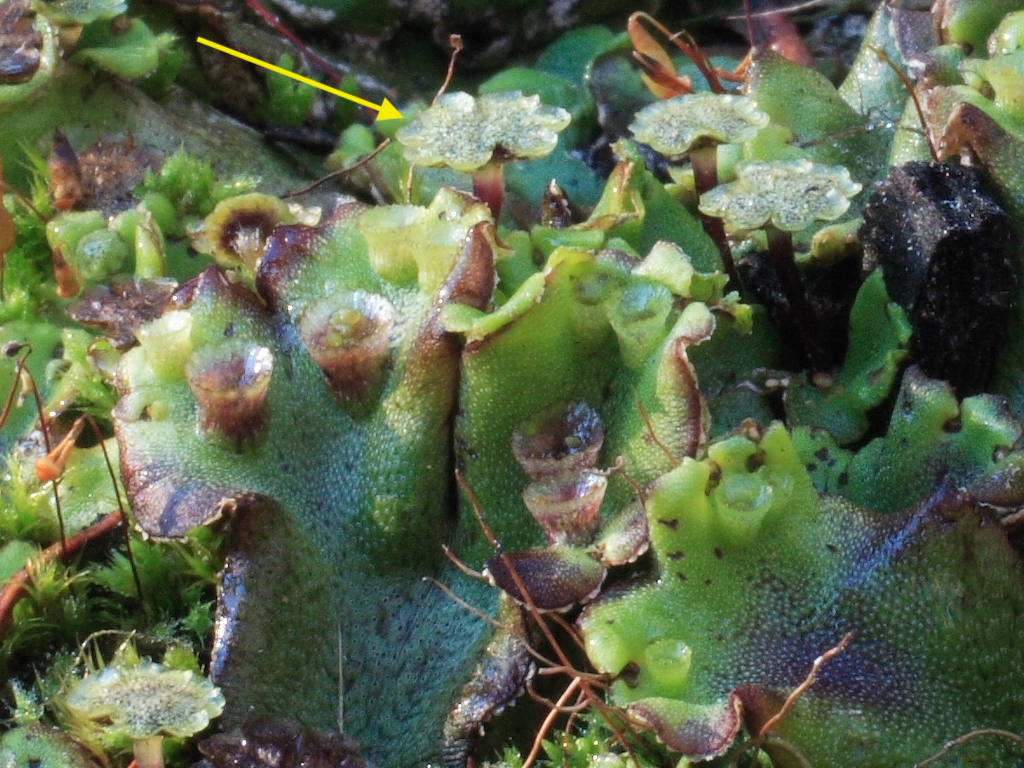 On nearby female plants, different structures are constructed. Little palm-tree growths appear, and it is under the “branches” of these structures that the egg-producing organs are found (Figure 9). 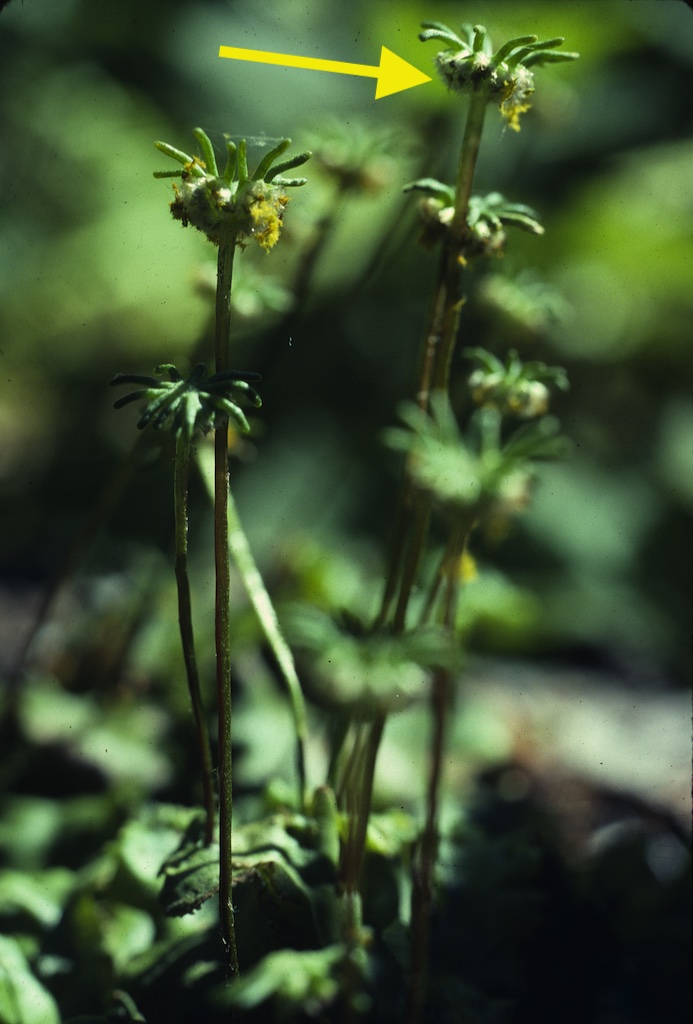 Rain hitting a male structure is diverted to the side in every direction, carrying the sperm cells to the trapping arms of the palm trees. The regular activities of the bryophyte life cycle take place: sperm are delivered to eggs and the resulting zygotes (fertilized eggs) develop into sporophytes. In the case of Marchantia, sporophytes have very short setas and basically depend on the female gametophyte, palm-tree-like structures to raise the sporophytes up to where they can release their spores into the air when mature. All these activities take place in late summer here in our gardens and out in the wild where you can also find Marchantia polymorpha.