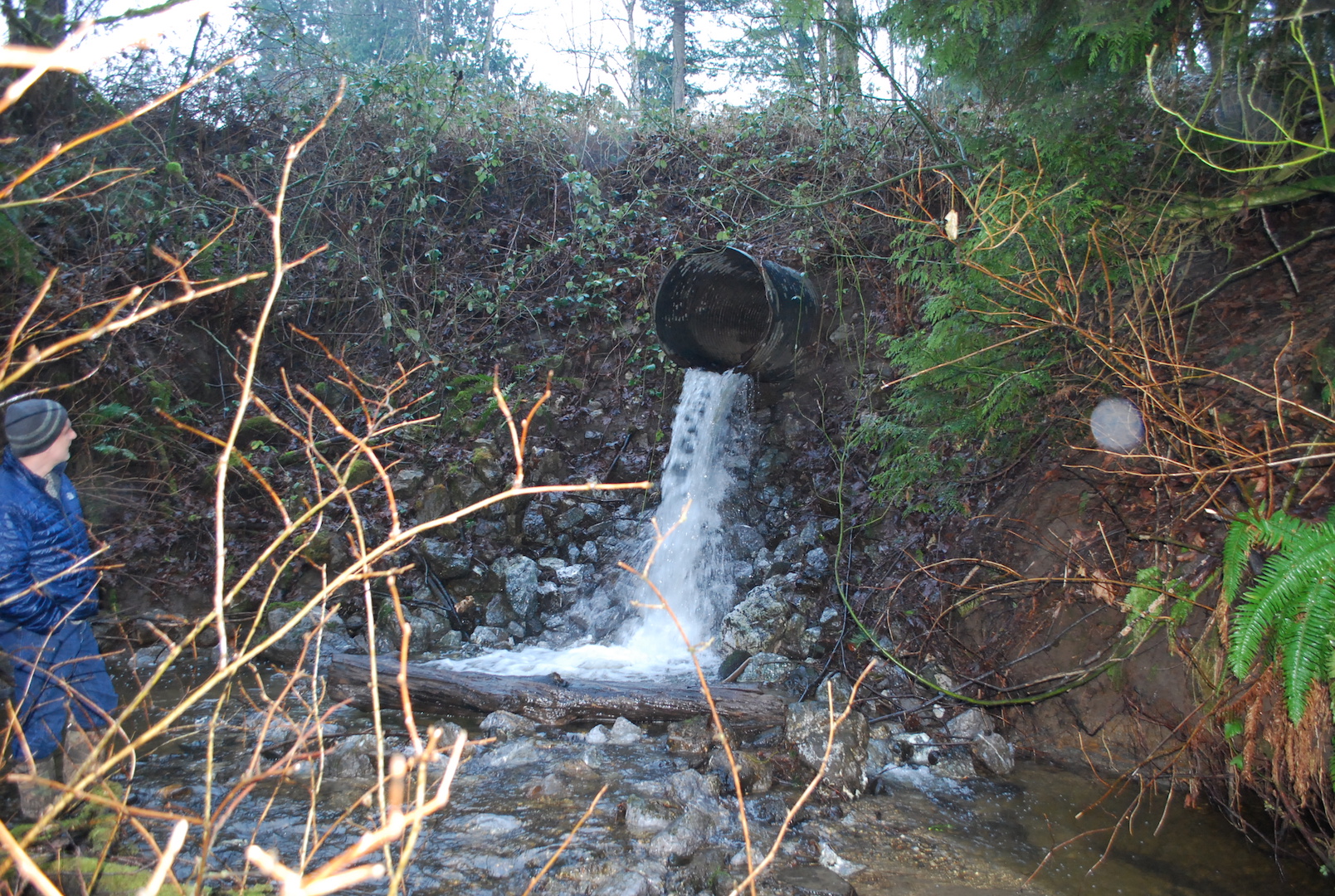 Coho salmon rely on streams and side channels for spawning and juvenile rearing before their migration to salt water to feed, grow and mature. They typically spawn between the ages of three and four in their natal streams. Coho and other salmon are vulnerable to many stressors including blocked access to spawning grounds and habitat degradation caused by dams, culverts and past land use practices. (1)

One successful approach to restoring historic native coho and other salmon populations throughout the Pacific Northwest has included the removal of barriers to fish passage in conjunction with instream and riparian buffer habitat restoration. 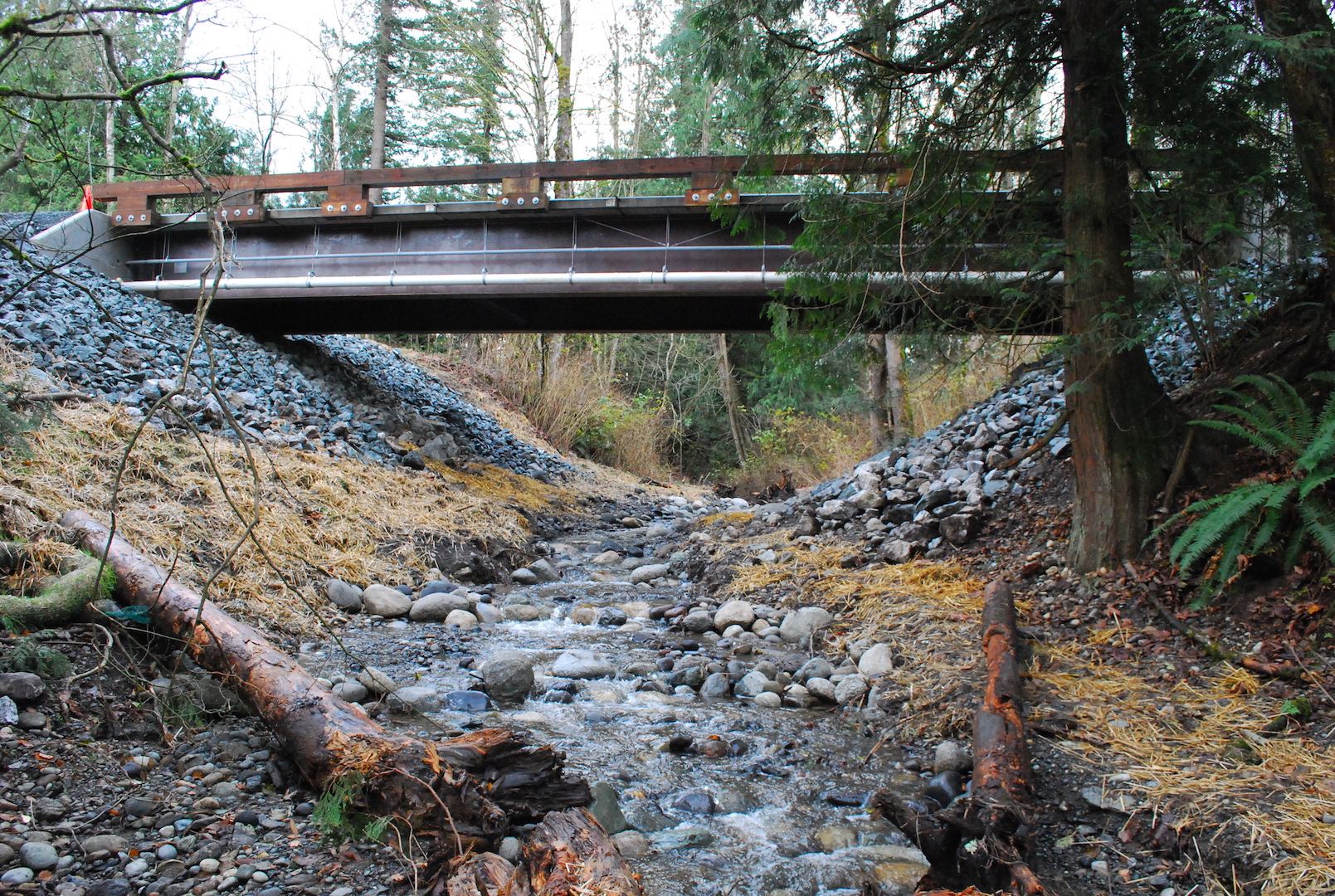 By the fall of 2017, the culvert had been removed and replaced with this footbridge. NSEA also regraded the streambed, and eventually planted many native trees and shrubs to prevent erosion and provide shade to keep the water temperature cool for salmon fry.
courtesy photos: Nooksack Salmon Enhancement Association

One of 14 Regional Fisheries Enhancement Groups in Washington state, the nonprofit Nooksack Salmon Enhancement Association (NSEA) in Bellingham, has successfully completed over 450 projects on salmon-bearing creeks in Whatcom County over its 30-year history. (2) One of those is a channel modification and barrier removal project on a tributary of Goodwin Creek in the Sumas River watershed. Thanks to partnerships with three landowners and several state and federal agencies, a mile-long section of habitat has been reconnected with the native Pacific coho populations for the first time in over 30 years.

If You Rebuild It, They Will Come
Planning first began in 2015 to remove three fish passage barriers on private properties. “One of the great aspects about working on streams is the opportunity to get to know a diverse variety of landowners,” explains NSEA Project Manager Darrell Gray. “A project begins with a conversation about salmon, and grows over time to a variety of topics. Throughout the years, I have had the great pleasure of getting to know some amazing landowners. These three were particularly great to work with.”

Each of the three landowners came to the project with differing backgrounds, interests and needs. One 30-acre small business farm raises horses and cows. The second is an 80-acre farm and the third, owned by Rose Anne Featherston, is a 5-acre farm with a horse.

“It was around 2014 that I contacted the Whatcom Conservation District (3) about participating in their CREP program,” remembers Featherston of the stream that runs just meters behind her home. The CREP, or Conservation Reserve Enhancement Program, is a county-based voluntary program that pays landowners to establish native tree and shrub buffers along fish-bearing streams and rivers. CREP removed about an acre of invasive blackberries and planted native plants. Native plant buffers protect water quality, develop root systems that stabilize stream banks, reduce erosion, create shade that lowers water temperature and leaf litter attracts macroinvertebrates that young salmon eat.

“When we discovered that my culvert was almost blocked, CREP connected me with NSEA.” Both Featherston and her neighbors had culverts that were too small. One culvert had a drop of more than six feet that prevented coho passage for more than three decades. But, coho spotted north of the culvert were evidence that a restoration effort could be successful if done well.

The Restoration Approach
“After surveying the stream to develop project designs, it became apparent that all of the barriers should be removed at the same time to allow stored sediments behind each to move downstream, establishing a new stream gradient,” remembers Gray. 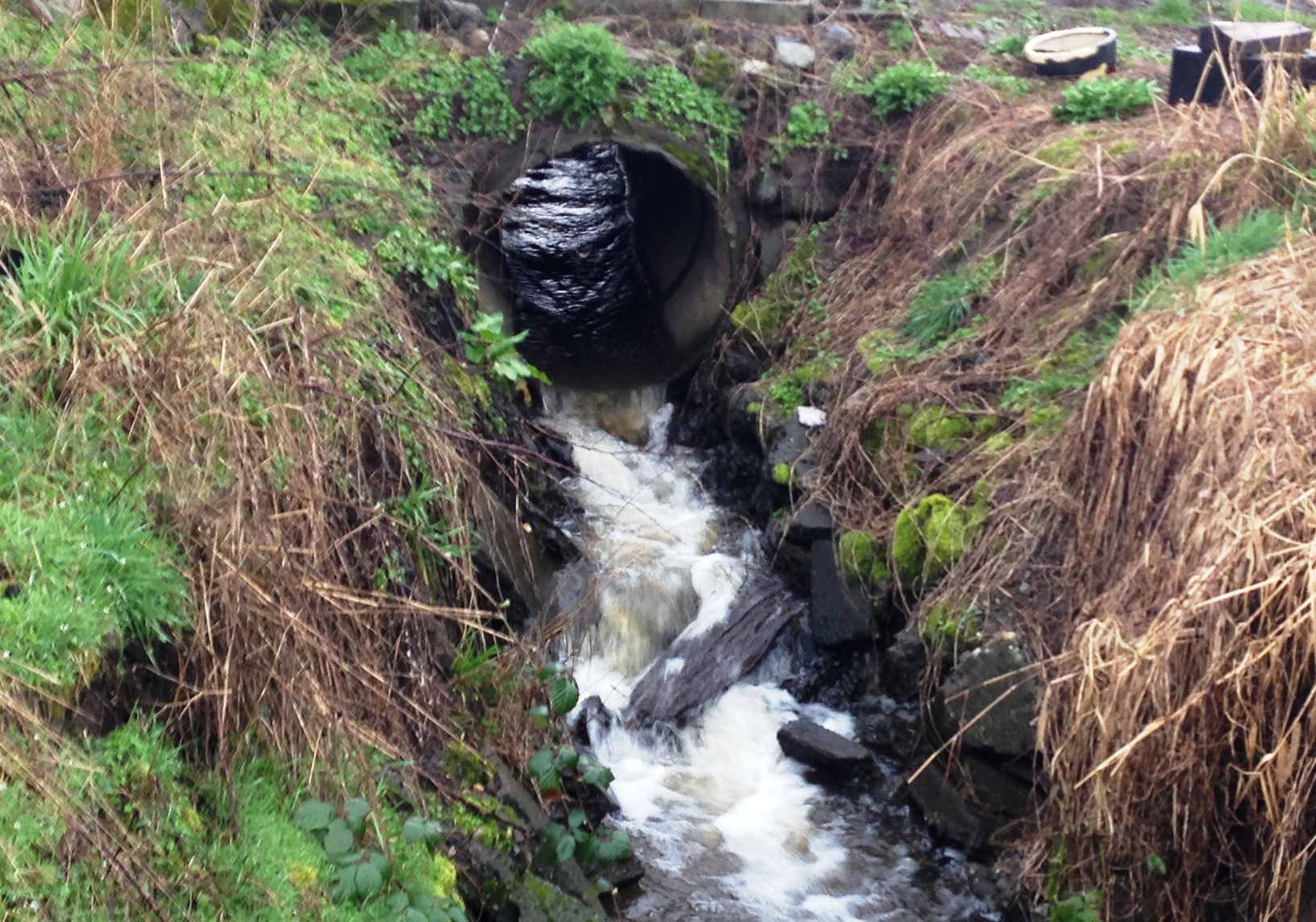 In 2016, this small culvert concentrated stream flow and allowed no rest- ing areas for salmon, causing the fish to have to work much harder to pass through than they would in a natural stream system.

Construction began in early September 2016 just in time for the fall rains and lasted more than three weeks. As the properties were all neighboring, NSEA was able to move equipment from one site to the next with the removal of a few fences. “This also allowed us to regrade the channel between sites to the anticipated new stream gradient,” explains Gray. “Large cobbles were added to the stream bed to maintain the new gradient and provide areas of slower moving water where salmon can rest.” 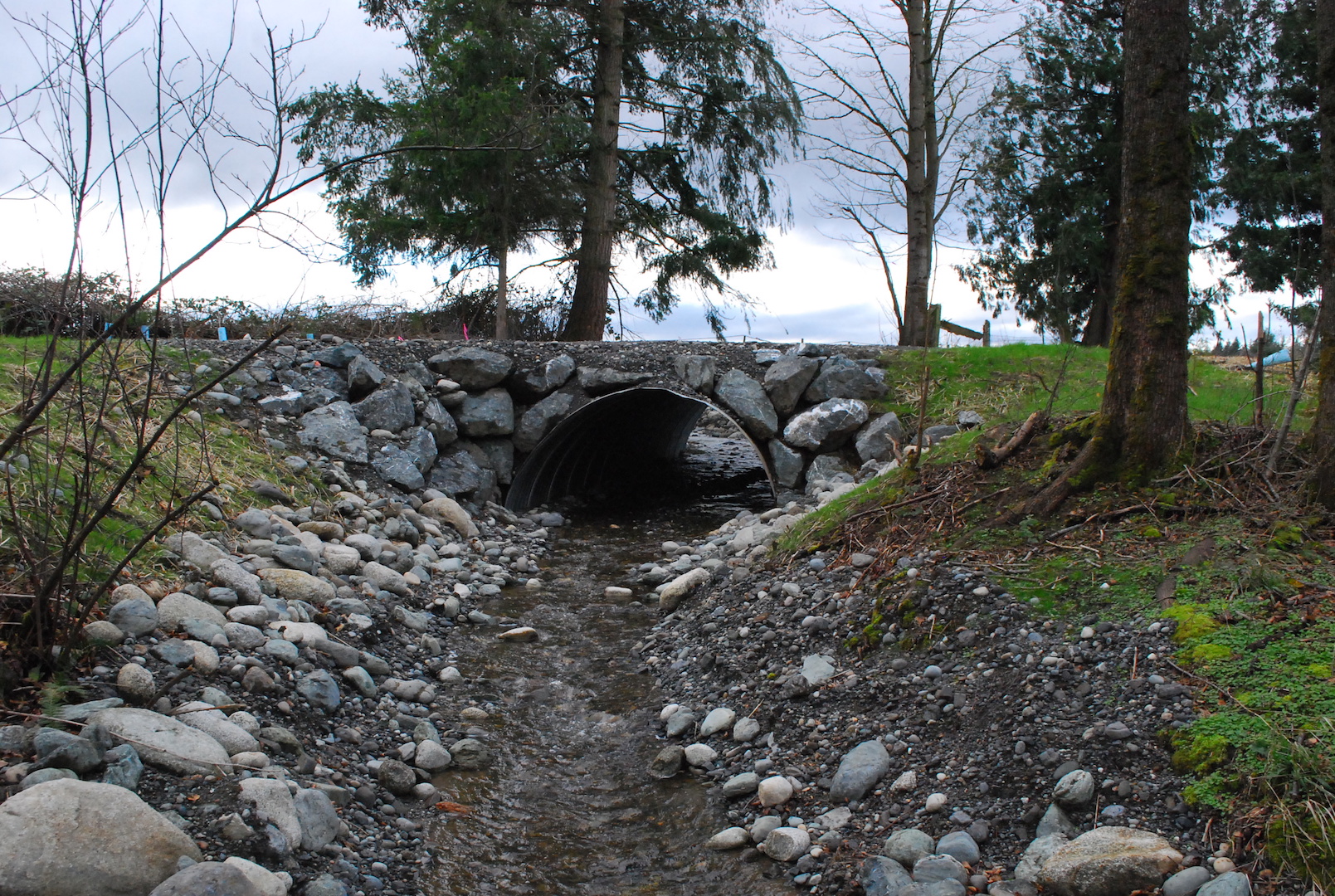 NSEA is required by permit to revegetate areas disturbed during instream projects. Work was completed by the NSEA team and native replantings were accomplished with help from six members of the Washington Conservation Corps (WCC), an AmeriCorps program administered by the Washington State Department of Ecology. (4) They planted over 760 young native trees and shrubs across the three properties, including western red cedar, Douglas fir, Pacific nine bark and black twinberry, all grown from bare-root stock in NSEA’s nursery.

Immediate Impact
“Within a few weeks of project completion, through my window I heard the first splashes of the salmon returning. It was amazing,” remembers Featherston who has since joined the NSEA Board of Directors to provide landowner perspective. “This year I’ve already seen opossum, eagles and coyotes feasting on salmon carcasses.” More than 40 species of vertebrates, including salmon, birds and mammals directly benefit from salmon runs by feasting on salmon, their eggs, carcasses or their young. (5) 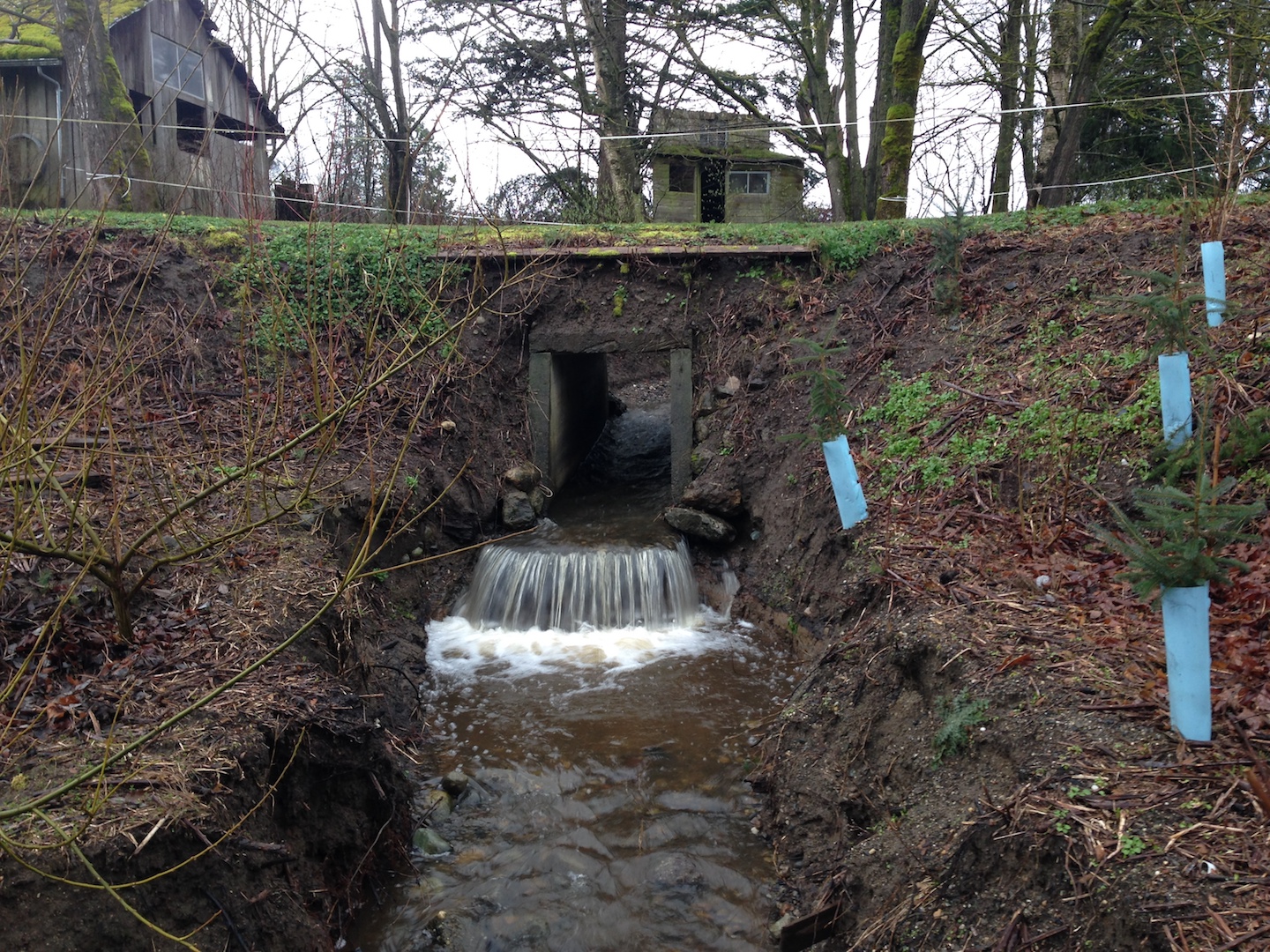 Lot 3 Before: In 2016, this small culvert concentrated stream flow and
allowed no resting areas for salmon, causing the fish to have to work
much harder to pass through than they would in a natural stream system. 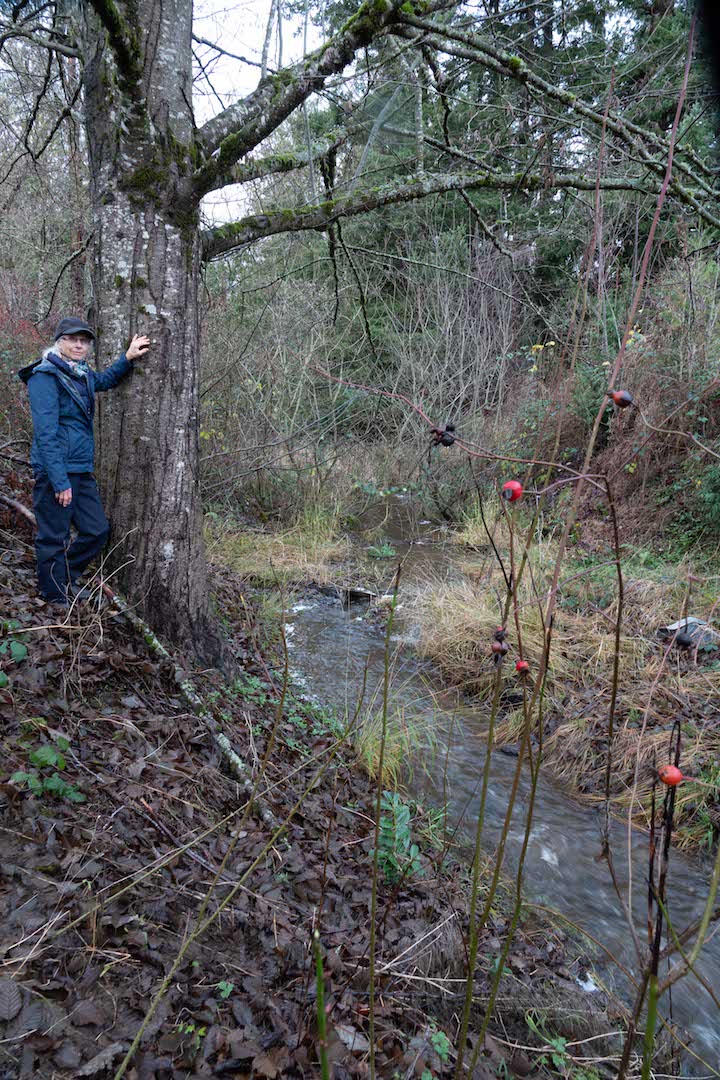 Lot 3 After: By fall 2017, NSEA replaced the culvert with a much larger culvert allowing broader stream flow characteristics. The stream bed was also regraded to provide more gradual flow conditions. Eventually many native trees and shrubs were planted.

NSEA monitors their project sites — through spawner and vegetation surveys — for three to five years after completion to evaluate restoration efforts. In addition to counting live fish, NSEA counts dead fish and new and old redds (spawning nests), and records stream flow and visibility. Having been monitored 19 times since 2017, NSEA has now documented more than 230 adult salmon migrating upstream, many of which spawned within the project reach.

What Swims Ahead
This project demonstrates that removing barriers to fish passage, such as culverts and steep elevation changes, while improving native plant buffers along streams, can restore historic coho salmon runs in Pacific Northwest tributaries in just a few years.

“The great thing about NSEA is that they listen to landowners,” notes Featherston. “I’m impressed by how Darrell and NSEA never push landowners. They come up with creative solutions that meet the needs of diverse landowners and are gifted at striking that balance.”

This summer, NSEA will continue their instream and riparian restoration work farther upstream to give these coho access to additional habitat further to the south.

“We have great appreciation for landowners like these who [sic] are curious, patient and accommodating participants,” adds Gray. “We hope this kind of work will help restore historic salmon populations and that these neighbors will enjoy the returning salmon for years to come.”

Celebrating 30 Years
“Seeing the coho and spring Chinook return to spawn in areas that we’ve cared for is just one of the things that makes all of this hard work feel more like a reward than an effort,” explains NSEA Executive Director Rachel Vasak. “It’s such a joy looking up at a tree we planted — once just a tiny seedling, but now over 50-feet tall — or hearing community members describe the wonder they experienced as a child when they learned about salmon and habitat from NSEA over 20 years ago. Over our 30 years, we’ve completed over 450 restoration projects, educated more than 25,000 students about salmon, and planted well over 100,000 trees in Whatcom County.”

NSEA is poised to continue this important work in the decades to come. In 2021 alone, NSEA will remove 13 fish passage barriers, improving access to over 20 miles of upstream habitat, as well as install 17 large woody debris structures and over 21,000 native plants along 7,900 feet of stream channel.

Head to www.n-sea.org to make a donation in support of this work and to learn more about upcoming work parties and 30th anniversary celebration events or call 360-715-0283. (2)

Darrell Gray, NSEA project manager, has been with NSEA for more than 25 years.

Amy Johnson is NSEA’s advancement manager in charge of communications and development.