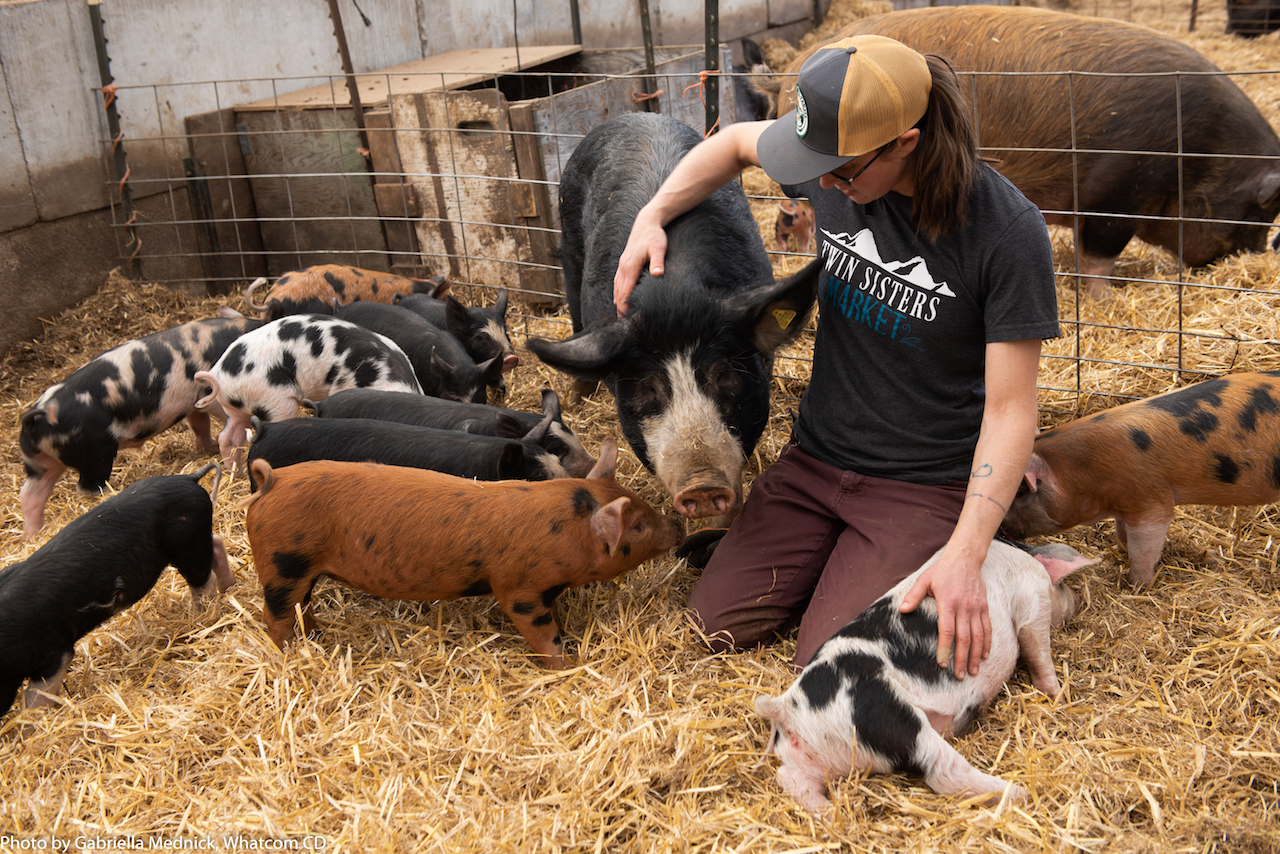 A hundred pigs create a lot of waste. Whatcom Conservation District assisted Al- luvial Farms with the development of a Comprehensive Nutrient Management Plan that helped them receive funding for a now complete 2,500-square-foot aerated composting facility. The compost is reused on site to grow half the grain needed each year to feed the pigs.
photo: Gabriella Mednick/Whatcom Conservation District

by Lorraine Wilde and Aneka Sweeney

It takes a village to build a farm and keep it viable long term. With 32 years of combined farming experience, Katie Pencke and Matthew McDermott founded Alluvial Farms in 2016. (1) “We spent 2014 and 2015 studying pastured pork production and quickly went hog wild with the idea of creating a system where the hog could be honored for its service to humanity with a seven- to nine-month-long life that was a full expression of pig-ness,” remembers Pencke. But for the next two years the couple from Seattle and Michigan searched for and bid without success on land in hopes of realizing their dream to raise pastured pork and grow organic peas and barley to feed the hogs.

Their persistence eventually paid off. In February 2018, with help from several agencies working together — Whatcom Land Trust, the U. S. Department of Agriculture (USDA) Farm Service Agency (FSA) (3) and Whatcom Conservation District (WCD) (4) — the pair became proud family farmers and owners of 48 well-drained acres on Goodwin Road southeast of Everson, Washington. But that might have never been possible if it weren’t for the salmon-bearing stream — Dale Creek — that runs along the property’s northern border.

Collaborative Partnerships
Even the name Alluvial Farms is rooted in the land. According to their website, “Alluvial fans are fan-shaped deposits of soil at the base of topographical features, such as the Western slope of the North Cascade Mountains. Alluvial soils tend to be rich agricultural mediums and, like most things, dynamic in their ever-shifting nature. We farm in the broad alluvial fans of the Frasier and Nooksack River deltas, and appreciate the metaphor.”

Primarily coho salmon, but also Chinook, char, steelhead and cutthroat, use the portion of Dale Creek that runs along the creek as their spawning and rearing grounds. The young fry that survive grow fat and strong from their feast of stream macroinvertebrates until the 12- to 18-month-old smolts migrate to the ocean in the spring. Because this delicate life cycle occurs so close to the farm, Penke and McDermott are doing all they can to ensure their livelihood doesn’t impact the salmon populations that have been using the creek for millennia.

The presence of salmon meant that the land that would become Alluvial Farms was eligible to enroll in the Conservation Reserve Enhancement Program (CREP), a voluntary restoration program administered by the Whatcom Conservation District and the USDA’s Farm Service Agency. CREP pays land owners an annual rental rate and the costs of planting and maintaining native trees and shrubs, in exchange for removing environmentally-sensitive land from farm production and establishing a protective buffer along fish-bearing creeks. The contract period typically lasts either 10 or 15 years. For Alluvial Farms, enrollment in the program and the protection of this valuable resource were the crux that enabled the rest of the farm purchase move forward.

Pencke and McDermott had been turned away by several banks. So many that they were able to win loan approval from USDA FSA acting as a bank of “last resort.” Before purchasing the land, WCD helped the pair by conducting a pre-purchase property assessment that looked at soils, critical areas and historical photos. WCD also developed a proposal for the CREP project, which would eventually plant native trees and shrubs across about 10 acres along Dale Creek.

Conservation Loan
Whatcom Land Trust then stepped up by providing Alluvial Farms with a three-year conservation loan to buy the land, with options to either pay back the loan in three years with 3 percent interest or record a conservation easement on the 10-acre riparian habitat area along Dale Creek that CREP was helping to restore. This conservation easement will keep the restored riparian buffer permanent, even after the CREP contract expires.

Alluvial Farms was given the equivalent of a bridge loan because of a $1.3 million grant of the Whatcom County Working Lands Conserving Watersheds Project. This program is aimed at preserving a long-term, viable agriculture industry — and the accompanying food security for this community — by providing landowners financial incentives to keep their farms in production while also protecting the watershed.

“This is part of our Farming for Food & Wildlife program that seeks to balance farmland protection and habitat protection, which we believe are compatible and not mutually exclusive,” explains Whatcom Land Trust Executive Director Gabe Epperson.

The Whatcom Conservation District also helped Alluvial Farms develop a farm plan as part of the requirements for their conservation easement with Whatcom Land Trust.

Once the purchase was complete, Alluvial Farms hit the ground running. They established a 20-acre organic grain field that provides half the quantity needed to feed their pigs. More than a hundred Berkshire-cross pigs are now raised annually outdoors on 10 acres of organic pasture rotation and a heavy use area for winter rooting.

In 2020, they achieved Animal Welfare Approved (5) status with help from A Greener World (6) and have had their crops certified organic with Oregon Tilth (7). The pair also grows wine grapes and hemp for CBD (cannabidiol) self-care products.

A hundred pigs create a lot of waste, however. To ensure their waste was properly managed, the Whatcom Conservation District  assisted the pair with additional soil testing and the development of a Comprehensive Nutrient Management Plan that helped them receive funding for a now complete 2,500-square-foot aerated composting facility.

Land Not Flooded
In spring 2020, thanks to WCD, the CREP program planted almost 5,000 native tree and shrub seedlings throughout 10.4 acres to create a forested habitat buffer along 3,237 feet of Dale Creek. Thankfully, that effort was not harmed during the recent flooding. “Our farm is high and dry so we were not impacted by flooding. Dale Creek did jump its banks directly below our farm, and flooded Mack Road and all the parcels between us and the Sumas River, however,” explains Pencke.

It’s possible that the recent flooding may have helped a few adult salmon reach areas not previously accessible to them. “My son saw a full-sized spawning salmon in the creek this year in the days following the historic flooding,” adds Pencke. “Since we have been watching the creek here starting February 2018, we have never seen large adult spawning salmon in this part of the creek, though we have seen lots of small fish in the summer.”

Penke and McDermott plan to support and encourage additional conservation and restoration efforts on a parcel across the creek from them, and seek additional help for a section just downstream from them where flooding and substantial property damage occurred this year.

“Just below our parcel, Dale Creek has been engineered to pass through a culvert under Mack Road, take a hard left turn to travel through a roadside ditch, and then actually passes through a bermed area which is above grade before passing through a forested wetland and joining the Sumas River,” explains Penke of the conservation work still to be done. “We had assumed it was all these interventions that had been the reason we no longer saw spawning salmon in this creek. Even now we are not sure how salmon could have accessed our portion of the creek.”

“When you look across the whole landscape of the county and broader, preservation adds up and will ensure the next generation and thereafter have natural spaces that hold wildlife diversity,” says McDermott. “I hope this ends up being a model for other people.”

Alluvial Farms continues to grow their business and improve the functionality of the property. “2021 was our sixth season in business and included another round of organic grain production — more than 36 tons of barley from our own organic grain field — plus harvest of 120 hogs, construction of a home and retail space, a 2,500-square-foot aerated composting facility and a greenhouse,” explains Pencke. “This year we also launched our self-care line of products based on organic CBD distillate from our plants, and lard from our pigs. And, we planted our first of five acres of grapes and began helping our contractor with CREP maintenance.”

“Whatcom Land Trust is excited and honored to work with farmers like Alluvial Farms, who value land and wildlife conservation while also feeding our community and ensuring our collective long-term food security for decades to come,” adds Epperson.

If you’re interested in local, pasture-raised pork, Alluvial Farms is currently taking deposits for quarter, half and whole pork shares to be delivered in the first quarter of 2022. You can find their pork at multiple locations (8) in the community and their CBD wellness products (9) can be purchased online at Alluvialfarms.com (1). Consider making your donation today in support the Farming for Food & Wildlife program at whatcomlandtrust.org (10).

Lorraine Wilde, owner of the public relations company Wilde World Communications, and has lived in Whatcom County for almost 30 years. She earned her M.S. in environmental science from Western Washington University and cares deeply about this place she calls home.

Aneka Sweeney joined the Whatcom Conservation District in 2014 to strengthen the community outreach and sustainable education programs. She earned a B.S. in biology with a minor in environmental restoration from Colorado Mesa University and a Masters of Education in environmental studies from Western Washington University