There are certain times of the year that are particularly notable, especially those times that relate to seasonal changes. The change from spring into summer is often so subtle that we hardly notice the shift. Summer eases into fall and the initial response is one of relief from the hot and dry weather of July and August. Fall is mostly nostalgic and family-oriented, with a string of holidays that makes us think of home and fam­ily, as well as other times in our lives. Winter is a time to batten our respective hatches and add a few layers. This time of year, in early March, offers a feeling of renewal along with a subtle reminder that we made it through another winter. This is the time of year I affectionately refer to as winterspring.

If you’ve read this column be­fore, you probably know of my tendency to acknowledge not only the four seasons but also the transitional period when two seasons overlap. As well as the human element, seasonal changes affect the movement of birds into and out of our local area in the form of massive migrations. It’s always difficult to pinpoint pre­cisely when birds move, but we certainly notice when they do. With the ongoing conversation about climate change and its ef­fect on birds in general and their primary food sources, seasonal overlaps are becoming more er­ratic than ever. With this in mind, let’s see what this time of year has to offer.

Winterspring is an exciting time of the year for birdwatchers. As we move into March, the birds that have wintered here become noticeably restless as instinctual urges occupy most of their wak­ing hours. Activity increases as the birds prepare for the long flights to their traditional nesting grounds. An excellent example is the Pacific black brant. In one of the more sensational migrations in the bird world, brant leave their Arctic nesting grounds in the fall and most of them fly as far south as Baja, Mexico. Some brant have been known to fly non-stop for as long as fifty hours to reach their wintering grounds.

Throughout the winter months these same flocks meander north­ward, stopping at tra­ditional foraging and resting areas along the way. When winter-spring rolls around Brant. thousands of these birds congregate in the nutrient rich waters of the estuaries and embayments of northwest Wash­ington and Vancouver Island. The birds that you see here in March and April will be feeding constantly to build their fat re­serves for the long flight back to the Arctic where they will begin a new generation. 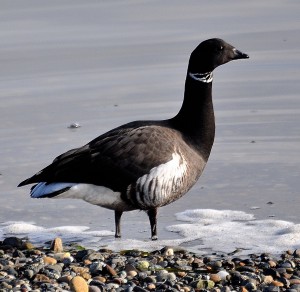 This pattern is typical of many species and creates a special time of year for birdwatchers in What­com County. These spectacular seasonal gatherings of birds along county shorelines are so impressive that several of the more accessible sites have been designated either as Important Bird Areas or integral stops on the Great Washington State BirdingTrail’s Cascade Loop. The numbers tell the tale as large flocks of waterfowl and shorebirds stop for refueling on the way north. Many of the birds that we see are just passing through but several species, like the magnifi­cent Caspian terns, stop at suitable nesting sites in the area.

The traditional and once boun­tiful runs of herring guaranteed rafts of as many as 30–40,000 birds of numerous species. The south end of Birch Bay was often covered with diving birds ac­companied by large flocks of at least four species of gulls. With the decline in the herring stock, many of these birds have shifted their focus to Vancouver Island. However, other species of food fish still provide a healthy stock of prey to attract large numbers of birds to local waters.

With the weather moderating, winterspring is a great time to get out and enjoy our local birds and the amazing scenery that we have as a backdrop for long days in the field. Other parts of the country might boast of more bird species but no other place that I’ve visited can offer the views that we have of the North Cascades and the British Columbia Coast Range. Add to that the absence of biting insects and snakes and this is truly a birdwatcher’s paradise.