Winter Is for Waterfowl 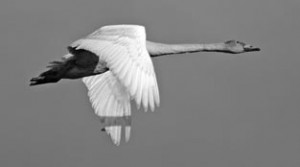 The typical sights and sounds of late October and early November evoked an avalanche of emotions from the past. When I was growing up in southwest Louisiana, the change from hot and humid summer weather gave way to crisp and clear fall days. There was great anticipation when the temperatures moderated and the rice harvest began. Not long after the harvest and the ensuing celebration of yet another successful season, the vast fields were silent until wintering waterfowl began to arrive from exotic faraway places like …. Canada! With hundreds of thousands of birds spending the winter close to home, the seeds of a future birdwatcher were sown.

From late fall into spring, the presence of immense flocks of waterfowl was noticeable every day as it seems they were constantly on the move to and from different foraging and resting sites. My hometown was surrounded by rice fields and the harvest always left ample forage, primarily for geese …. the noisy ones. If you’ve spent any time observing large flocks of snow geese, for instance, you know what I mean. They’re a gregarious lot and are hardly ever quiet. Considering my exposure to the outside world at an early age, this was music to my ears. It seems that the first arrivals always came in at night and that just added to the mystique for me.

When I lived in a couple of Rocky Mountain states, waterfowl were not a significant part of the bird watching landscape. After moving to Bellingham, however, I felt like I was home. Whatcom County hosts some of the largest concentrations of wintering waterfowl on the West Coast, much to the delight of winter bird watchers. Our moderate climate usually provides ice-free and food-rich habitats for feeding and resting waterfowl. The deep water supports large numbers of diving species while the shallow estuaries and tidal flats are ideal for the dabblers.

Cooperative Birds
One of the great appeals of waterfowl to birdwatchers is the fact that they’re usually out in the open and easy to see. This makes them ideal subjects for learning field identification and studying the behavioral characteristics of individual species. You could even say at times that waterfowl are cooperative. Some species, but certainly not all, will come close enough for the handouts that some humans feel compelled to offer. However, feeding wild animals in general is not encouraged. 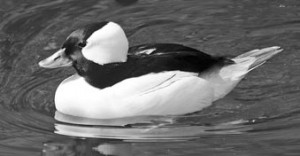 No matter how often I might wax upon favorite groups of birds, I always come around to waterfowl. Species size ranges from the magnificent trumpeter swans to diminutive buffleheads. For my own enjoyment, I like to broaden the field to include loons and grebes since they often occupy the same habitats. Most species find their own private places during the nesting season, but they congregate in large flocks come wintertime. While winter birding is not for everyone, dedicated birdwatchers see it as a time for jubilation, tempered by all the appropriate layers of clothing. Comfort is the key to an enjoyable day in the field, regardless of the season.

The October arrival of snow geese in the area only served to rekindle my love for winter birding and specifically for waterfowl. Most of the breeders from southern climes have already headed back to their wintering territories. Now, the days are filled with the great northern flocks that spend the colder months entertaining us. Whatcom County shorelines, as well as the numerous freshwater lakes and ponds are the best places to spend time with waterfowl.

Whatever your focus, there is no better place to observe numerous species and hone your field identification skills than right here in our own backyard. One of the single best places to see the most birds is also one of the most accessible and user-friendly places I’ve ever been. Properly known, that place is Semiahmoo Bay/Drayton Harbor. I affectionately refer to it as BlaMoo, since it includes the entire Blaine waterfront and the tributaries of Dakota and California Creeks. I lead a number of Washington Ornithological Society field trips to this location every year and it ranks as one of the top hotspots in the country for winter birding. It’s one of the premiere locations on Washington’s Important Bird Areas program and anchors the Cascade Loop of the Great Washington State Birding Trail.

Follow the Sun
A good rule of thumb for winter birding is to make a plan for maximum coverage, given the shorter daylight hours. You might consider the route that I always use on field trips to the area. To start at the top, travel north on Interstate 5 to the last Blaine exit, #276. Negotiate two roundabouts to go under the freeway and cross the railroad tracks and begin the day at Blaine’s Marine Park. In winter, the first view of waterfowl resting just offshore can be mind-boggling. Thousands of birds are often resting in this protected corner of Semiahmoo Bay.

One of the main pieces of equipment for your day in the field is a good scope, with accompanying tripod, of course. From the first overlook at Marine Park, scan the large flocks of American wigeons for the odd Eurasian wigeon that might be mixed in with the regulars. The Eurasians are always considered a special sighting since they’re far less common than their American counterparts. No matter the tide, closer in to the waterline will also be dabbling green-winged teal, along with more mallards than you care to count.

For the best viewing, if you’re able, leave your car behind, walk the shoreline of the park, and continue to the public pier at the end of Marine Drive. This pier has undergone recent changes making it more desirable than ever for birdwatchers. No cars are allowed on the pier and it’s only a short walk from the parking area to the overlook. From this vantage point, you can see everything that flies, swims, and dives in the channel that separates Semiahmoo from the Blaine waterfront. Diving sea ducks are the main attractions here, along with three species of loons, both goldeneye species, and as many as five species of grebes. On a good day, you will be hard pressed to pull yourself away from this one spot.

Pintails, Mallards and Geese Oh My!
After a thorough walking tour of the Blaine waterfront, the birds of Semiahmoo beckon. As you drive the perimeter of Drayton Harbor northern pintails often crowd the shoreline by the thousands. More pintails will greet you as you drive onto the Semiahmoo Spit. From the narrow neck of the spit, you can see birds on both sides of this natural formation. On the deep-water side you can add three species of scoters to your list for the day, while the lee side hosts even more pintails, mallards, and the gregarious Canada geese. This is also a great place to see Pacific black brant between November and April.

I always park at the end of the spit to take a lunch break and prepare for the best part of the day. From the vantage point of the last remaining Alaska Packers Association buildings and the public shore trail, the view alone is worth the trip. Throw in every imaginable diving bird you can think of and this is the perfect way to complete your day. Throughout the winter months and into spring the overall number of birds increases at this prime location. The public pier behind the resort is one of the best places for close-up views of long-tailed ducks, loons, and grebes. Large rafts of birds stretch across the bay to White Rock, BC.

Although it’s tempting to stay in one place for extended periods of time, an easy walk along both sides of the spit will add further to your day of discovery. Along with the waterfowl you will see throughout the day, this area is also noted for good numbers of wintering raptors like peregrine falcons and bald eagles, several species of gulls, and large flocks of shorebirds. If you plan ahead for a good day of winter birding, BlaMoo will deliver.