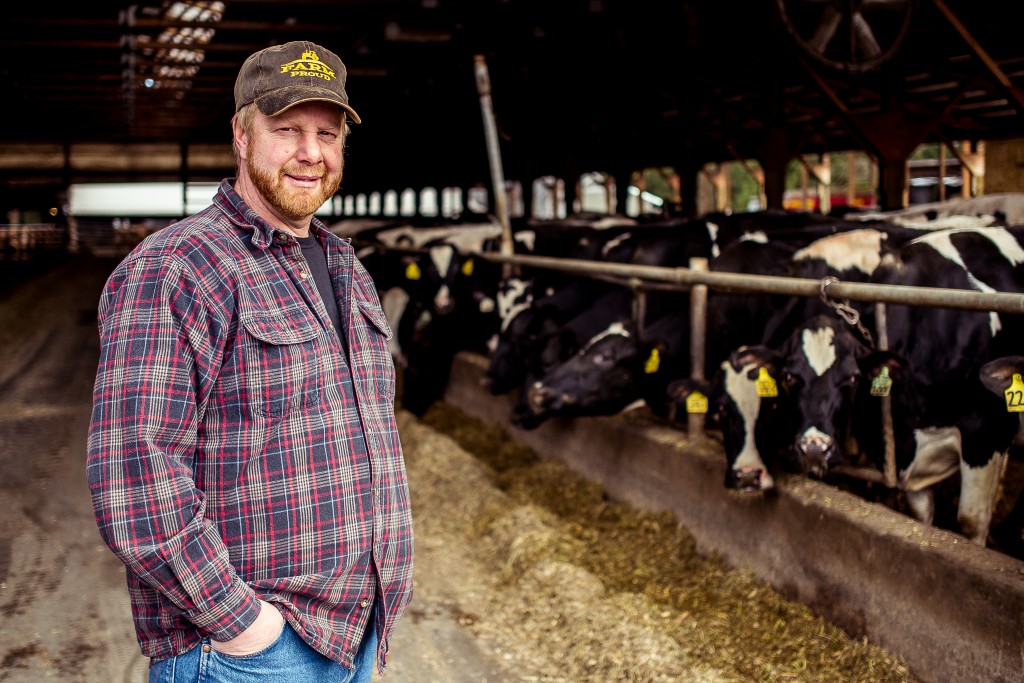 Whatcom dairy farmer Rich Appel says the more consumers and the public learn about today’s farm production, the greater confidence they will have in the safety and wholesomeness of food. Photo: : Jayson Korthuis

We thank Whatcom Watch and local writer Jennifer Moon for an excellent article on farming in Whatcom County (see “Can Whatcom’s Small Farms Help Reconstruct Our Local Food System?” Whatcom Watch, Jan. 2016, by Jennifer Moon). This is very helpful in building understanding about local farming including providing a his­torical perspective and showing just how important farming is to our economy, our community values and our way of living here in this northwest corner.

The writer looks back to 1950s and how farming was done then as a guide to reconstructing our food system. She notes in Whatcom Watch January 2016: “In reac­tion to the industrialization of agriculture nationally, more and more consumers, retailers and restauranteurs have embraced local foods, promoting the concept of ‘farm to table.’ There is a strong and growing desire to know where our food comes from, learn about how it was produced, and meet the people who produced it.”

This is a very healthy and welcome change. Farmers encourage consumers to learn more about farming. It’s important for them to find out where their food comes from, how it is produced and processed. Whatcom Family Farmers is planning on greatly expanding our farm tour and farm education opportunities, which will benefit food consumers as well as food producers. The more consumers and the public learn about today’s farm production, the greater confidence they will have in the safety and wholesomeness of food and in the many ways farmers serve as careful stewards of precious resources and our environment.

The article also touches on some common misconceptions about farming, particularly as it relates to size. In Whatcom County, we are fortunate to have a large number of small farms as well as some fairly large ones. We don’t have corporate farms here as essentially all of our farms are owned and managed by often third-, fourth-and fifth-generation farmers. Having a healthy mix of small farms and bigger farms is necessary and, as the article points out, is helpful for everyone. Listening to some of the comments and criticisms of “factory” or “industrial” farms, one can misunder­stand the realities of today’s farming and why small farms can’t survive without the larger farms.

To understand this better, let’s take a closer look at farm production and the size of farms. Today, we have about 1,700 farms in Whatcom County. The writer states that the “farm economy continues to be dominated by small farms.” However, this is not really accurate. It’s true that there are many more small farms than large farms, but the largest farms contribute by far the most in terms of farm products and economic impact. The top 10 percent of Whatcom County’s 1,700 farms produce almost 93 percent of farm sales. That means that more than 1,500 of our farms produce only about 7 percent of farm products.

Small-farm-only advocates might want to take away the 200 largest farms. But let’s look at what would happen. The total value of farm products would go from $357 million to $25 million. We can’t make up that loss by adding more small farms and here’s why. Of the 1,700 farms, almost 70 percent (or 1,170) of them, earn less than $10,000 per year. Most earn a lot less. So if you doubled the number of the smaller farms, you would barely increase the farm production at all.

What is “Farm Gate”

Some might say, so what? Why do we need even a small number of big farms? Wouldn’t we be better off with just small farms? That $357 million in what’s called “farm gate” value gets translated into a lot more dollars in our local economy through the multiplier effect. Some estimate that multi­plier as much as ten times the farm value, but let’s be conservative and say three to five times. That means the $357 million translates to $1 billion to $1.5 billion in economic impact. Those are just numbers, unless you work at the hardware store, the car dealership, the insur­ance agency, or grocery store or hair salon supported by that farm gate value. Real people, with real jobs and real lives depend on the highly productive work of a small number of larger farmers.

If you don’t care about that either, think about what the small farmers need to be able to make even the small income off their farm. They need the stores, the supplies, the equipment and shared knowledge that comes with a healthy farm support com­munity. Most of all, they need the customers. For there to be customers even at the Farmer’s Market or at the local restaurant buying local farm produce, there have to be jobs. The larger farmers provide the majority of the sup­port jobs that the smaller farmers depend on.

The article author [Jennifer Moon] did point out this prob­lem as a major hindrance to the diversification that is advocated: “How can farmers pursue di­versified production if there is an inadequate processing and distribution system to get their product to market and to support the value-added production that increases the economic viability of farm businesses? But without the farmers, there is nothing to process or distribute. This is the problem that led to the collapse of local vegetable processing years ago. When processors moved out of the area, farmers stopped grow­ing vegetables. When you’re grow­ing a seasonal product, you only have a seasonal business in the absence of processing capacity.”

We Need Each Other

That is a very real problem. Sup­pose that the environmental law­yers who are vigorously attacking dairy farmers right now succeed in driving many of our family dairies out of business. The infrastructure to support those farmers would also collapse, and that means it would be much more difficult for small, organic dairy farmers to survive. The fact is, we need each other.

The writer also pointed at an­other problem with advocating for small farms only: the cost of food. The author states: “Some might ask: What difference does it make if agriculture is specialized and consolidated? The result, some would argue, is a more efficient market that has enabled more Americans to spend less of their household income on food. As a percent of income, American food expenditures have sharply declined since 1960. While Amer­icans spent 17.5 percent of their income on food in 1960, food represented only 9.9 percent of American household budgets by 2013.”

Actually, that point is beyond argument. Some may not like it but the efficiency and productiv­ity of larger farms has resulted in the safest, most nutritious and lowest cost food in the his­tory of the world. Farmers larger than locavore scale compete in a global marketplace, and the mar­ket forces drive ever-increasing efficiency and productivity. The remarkable productivity of today’s modern farm means that far fewer are employed directly on the farm, even counting the significant number of seasonal workers. But, as we pointed out, many jobs in our community are dependent on those few working on the farm.

We’re not sure what data the author is using to suggest that most farms in 1950 were part time farms, but it certainly is true that at least 80 percent of the 1,700 farms in our county of necessity are part time. In 1800 (the year), about 74 percent of all workers in the United States worked on the farm; by 1900 that was down to 42 percent; by 1950 it was down to 12 percent (1). Now it is around 2 percent (2). While an increasing number of young people would like to make a living as a small farmer, the reality is that unless they are willing to scale up to the level that the small farm ad­vocate doesn’t really like, they will have to find other employment. The options are to be a hobby farmer or to move into the area of efficient farm production. The problem with the hobby farmer is that another job is needed, and jobs in a farm economy are quite dependent on, once again, the larger farmer.

Diversification in size, in types of farm products produced, in production approaches such as organic and traditional, is healthy. It provides the choices that today’s food consumers want. Some choose to pay higher costs in ex­change for their understanding of value in how the farm goods were produced. Most tend to purchase the food they and their family need based on the high quality and low price provided by today’s highly efficient farmers. As farm­ers, we would very much like to see this diversification continue and increase. And we want to strongly encourage everyone in­terested in where their food comes from to take full advantage of the farm tours and educational oppor­tunities Whatcom Family Farmers will be offering later this year.