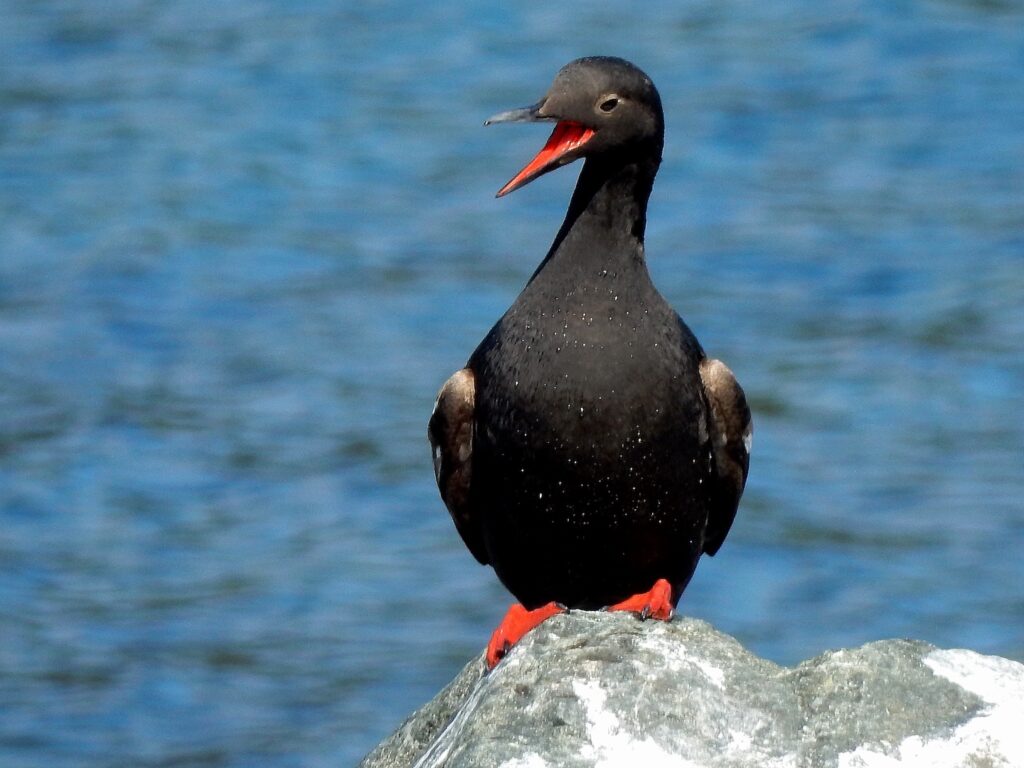 Just a short, relaxing drive from Bellingham is yet another place to check out if you’re interested in seeing birds in similar yet slightly different surroundings. Even if you’re not looking for birds, as some of us always are, there’s much to see and explore in this unique part of the Evergreen State. A mostly rural landscape is punctuated by picturesque small towns with the omnipresent sights and sounds of the Naval Air Station Whidbey Island, located just north of the island’s largest town, Oak Harbor.

Whidbey Island is rich in history related to the first sighting by Spanish explorers and eventually the voyages of Captain George Vancouver. He named the island after Joseph Whidbey, Master of the flagship, HMS Discovery. Whidbey and Peter Puget were the first to circumnavigate and map the island, which is the largest island in Washington state, as well as being the fourth largest and fourth longest in the contiguous United States. The island lies in the rain shadow of the Olympic Mountains and is part of the San Juan Archipelago.

Along with the great potential for birds, the island has a few stereotypical Puget Sound communities. Langley and Coupeville are two of my personal favorites. Many of the towns followed the shoreline when surveyors laid out the original city plats, and their proximity to saltwater gives them a distinctive Pacific Northwest flavor. Early settlements typified the connection to the inland waters of Puget Sound. Shops and eateries abound so non-birders can shop and dine while the birders do what they do. It’s the best of both worlds.

After crossing the bridge at Deception Pass, the entry to Whidbey Island at Deception Pass State Park is defined by the towering forests of the headlands. Drive into the park and continue to the vast parking area at West Beach. Leave your vehicle behind to explore the rocky shorelines and forest habitats at one of the more dynamic stops along your way south. On the beach where the relatively placid waters of the Strait of Juan de Fuca flow into and out of Deception Pass, there are usually black oystercatchers and gulls on the rocks just offshore. During spring and fall migrations Heermann’s gulls share the space while diving birds like loons and grebes frequent the often turbulent channel. The campground at the park is a perfect base to spend a few days, but take earplugs … Navy jets are apt to be on practice runs on an irregular basis.

With all due respect, whenever I leave Deception Pass heading south, my main focus is to get through the area around Oak Harbor. It’s a great place to stop if you need to resupply or have forgotten something at home, etc. It’s basically a heavily commercialized corridor that has little or no appeal to this traveler. Your opinion might vary, but I maintain this focus until I get closer to Penn Cove and Coupeville.

As you crest the hill overlooking Penn Cove, there are pullouts available to check the tide flats at the head of the cove for waterfowl and shorebirds. The Coupeville wharf is one of the best places to look for a Whidbey Island favorite … the pigeon guillemot. Guillemot burrows are frequently within view during the breeding/nesting season. The expansive views of Penn Cove from the wheelchair-accessible wharf offer great perspective with Mt. Baker to the northeast. If you have time, the wharf is a perfect spot for scoping marine birds.

Continuing south, Fort Casey, Keystone, and Crockett Lake offer the best of all worlds when you combine the mixed habitat in this one area. You can prowl the forest around the historic lighthouse and military installation in search of woodland species like great horned owls or stay closer to the rocky shorelines. On either side of State Hwy. 20, the seasonal prevalence of short-eared owls and northern harriers is complemented with bald eagles and red-tailed hawks. The grassland between the highway and Crockett Lake is ideal hunting territory for these raptors. The lake itself is usually crowded with waterfowl and a variety of shorebirds like dunlin, western sandpipers, and both species of yellowlegs. Two dowitchers’ species also frequent the lakeshore during migration.

A quick jog up the road from Fort Casey takes you to the aptly named Hill Road and Fort Ebey State Park and Ebey’s Landing. This unique stop offers second growth forest, thickets, and beachfront habitats for an interesting variety of birds like red crossbills, woodpeckers, nuthatches, and creepers. A parking lot at the bottom of Hill Road is a good place to stop for a picnic or just to explore. As you look across the open water toward Port Townsend, the birding potential is limited only by your optics. Occasionally, you might see one of the Navy’s nuclear submarines being escorted to or from the submarine base at Bangor, on Hood Canal.

The relaxation quotient increases as you motor into south Whidbey Island. The towns of Greenbank, Freeland, Langley, and Clinton offer all the amenities you might need. Langley is on my list of favorite Puget Sound communities and the city beach and marina are usually good for numerous marine species in the waters of Saratoga Passage. These protected inland waters provide a safe haven for loons, grebes, and assorted waterfowl. If you’re still in a birding mood when you leave Langley, be sure to stop by Deer Lagoon and Useless Bay. This is quite possibly one of the richest areas on the island for waterfowl and wading birds. Flocks of American white pelicans frequently stop by during migration. Possession Point State Park and the Possession Beach waterfront area are at the southernmost tip of Whidbey Island, and, with this designation, it’s closest to Seattle.

From my personal experience, I’ve found an ideal way to cap off a Whidbey Island birding tour. If you stay overnight at the Fort Casey State Park campground, have an early breakfast, pack your gear, and park in the lot adjacent to the ferry terminal. Leave your vehicle behind and walk onto the ferry for a round trip to Port Townsend to see numerous seabirds that make their living in the Admiralty Inlet. Marbled murrelets, common murres, Pacific and common loons, and rhinoceros auklets are frequent sightings along with pigeon guillemots and a seasonal variety of gulls and cormorants. Be alert for any number of marine mammals along the way, including harbor seals and minke whales.

Overall, Whidbey Island has a wealth of places to visit, no matter if you’re into birding, kayaking, hiking, or just in the mood for exploring new terrain. Even though you’re on an island, the ease of access to and from Whidbey is perfectly designed. State Hwy. 20 enters from the north while the Washington State Ferry System provides additional connections on both sides of the island. Regular runs from Keystone take you to Port Townsend and the Olympic Peninsula. On the east side, ferries sail from Clinton to the mainland at Mukilteo, a short drive to the Interstate and points north and south. When it comes to Whidbey Island, numerous options are available for planning day trips or extended getaways.
__________________________