Shall the council:
138. Authorize the executive to sign a contract up to $300,000 with the state of Washington? The contract with the state Department of of Health and Human Services (DSHS) will provide an advance of long-term working capital to manage cash for DSHS-funded programs that include those serving individuals with developmental disabilities and those needing long-term care support. It expires on 6/30/2020. (AB2019-369) Approved 6-0, Tyler Byrd absent.

139. Authorize the executive to sign a $3,678,521 contact with the state of Washington? The contact with the Developmental Disabilities Administration of Department of of Health and Human Services will provide state funds for programs that support employment and community inclusion services, early child development services for infants and toddlers, and education and training opportunities for the general public as well as support staff working with individuals with developmental disabilities. The 2019-2021 contact is a $119,306 increase over the 2018-2019 contract. (AB2019-372) Approved 6-0, Tyler Byrd absent.

140. Authorize the executive to sign a contract with the Lummi Nation? (Council acting as the flood control district board of supervisors.) The contract will fund the repair 325 feet of the east bank levee of the Lummi (Red) River between Haxton Way and the seawall containing the Lummi Nation aquaculture pond. The estimated cost of construction is $115,000, with 85 percent of the funding from the Flood Control Zone District and 15 percent from the Lummi Nation. (AB2019-313) Approved 6-0, Tyler Byrd absent.

142. Authorize the public works director to apply to the Brian Abbott Fish Barrier Removal Board seeking funding to remove a fish-passage barrier on Kenney Creek at North Fork Road? The barrier removal board is part of the state Department of Fish and Wildlife. The preliminary engineering phase of the North Fork Road/Kenney Creek fish passage project will include site assessment, alternatives analysis and design, and bid preparation. The preliminary engineering cost is estimated at $523,000. The project is listed as Item No. 31 on the 2019 annual construction program. AB2019-385 (Resolution 2019-032) Approved 6-0, Tyler Byrd absent.

143. Extend the interim moratorium on the acceptance and processing of applications and permits for new or expanded facilities in the Cherry Point UGA, the primary purpose of which would be the shipment of unrefined fossil fuels not to be processed at Cherry Point. (Public hearing held.) This vote extends the moratorium for six months, with options for renewal if the appropriate public hearings are held. The moratorium covers facilities including, but not limited to, piers, wharfs, buildings, tank farms, pipelines, rail loading and offloading facilities, road spurs, or other infrastructure purposed for exporting unrefined fossil fuels, including stabilized or unstabilized crude oil, diluted or raw bitumen, syncrude, coal, methane, propane, butane, and liquid or gaseous natural gas. The council initiated the six-month moratorium at the 8/9/2016 meeting, vote #147; this vote is the seventh time it has been extended. AB2019-339 (Ordinance 2019-049) Adopted 5-1, Barbara Brenner 1 opposed, Tyler Byrd absent.

Shall the council:
146. Authorize the executive to accept a $4,257,257 state grant for housing assistance? The grant supports the priorities outlined in the Whatcom County plan to end homelessness. Grant funding is passed through to partner agencies including Lydia Place, Northwest Youth Services and the Opportunity Council to support housing stability by funding utility and other essential needs. An increase in funding of $997,522 will support an 40 additional households and 10 unsheltered families with children experiencing chronic homelessness. The contract expires on 6/30/2021. (AB2019-386) Approved 7-0

147. Authorize the executive to sign a $729,344 contract (amendment #1) with KPFF Consulting Engineers of Seattle? At the 8/8/2017 meeting, vote #154, council voted to enter into a $322,119 contract with KPFF Consulting Engineers to establish service levels for the Lummi Island ferry system. This amendment will support continued project development, including: a financial plan; grant applications; and conceptual designs for terminal modifications and a replacement vessel. This amendment brings the total contract to $1,051,463; it expires on 12/31/2021. (AB2019-391) Approved 7-0

148. Authorize the executive to sign a $1,429,113 contract (amendment #5) with the Opportunity Council? At the 6/5/2018 meeting, vote #90, the council approved a $1,087,355 contract to deliver housing stability supports that include essential basic needs, rent, and utility assistance and case management services for individuals eligible under Washington State Department of Social and Health Services guidelines for the Housing and Essential Needs (HEN) program. This amendment brings the total contact to $2,629,463; it expires on 6/30/2020. (AB2019-393) Approved 7-0

150. Amend the membership structure of the Homeless Strategies Workgroup? At the 10/24/2017 meeting, vote #205, the council created the 10-member workgroup for the purpose of identifying policy initiatives to address the needs of individuals living unsheltered in Whatcom County. At the 2/27/2018 meeting, vote #32, one representative from the Port of Bellingham was added. This amendment will expand the scope of the group to include: adding capacity to existing shelters and identifying new temporary winter shelters; and developing policies to prevent people from experiencing homelessness. This vote will expand membership to 17. There will be members from the administrations of the city and Port of Bellingham, Whatcom County, tribal nation, and small city administration; two County Council members; two Bellingham City Council members; representatives from the non-profit homeless service providers: the Lighthouse Mission Ministries, Northwest Youth Services, and the Opportunity Council; staff representing emergency medical services, the health department, and law enforcement; and a homeless advocate position. AB2019-402 (Resolution 2019-034) Substitute approved 7-0

151. Grant a franchise to the Northwest Water Association to provide water services? (Public hearing held.) At the 10/5/1993 meeting, the council approved a 25-year franchise. This superseding, non-exclusive 25-year franchise includes the right to access county rights of way in order to support the delivery of water. AB2019-347 (Ordinance 2019-052) Adopted 6-0-1, Barbara Brenner 4 abstained. 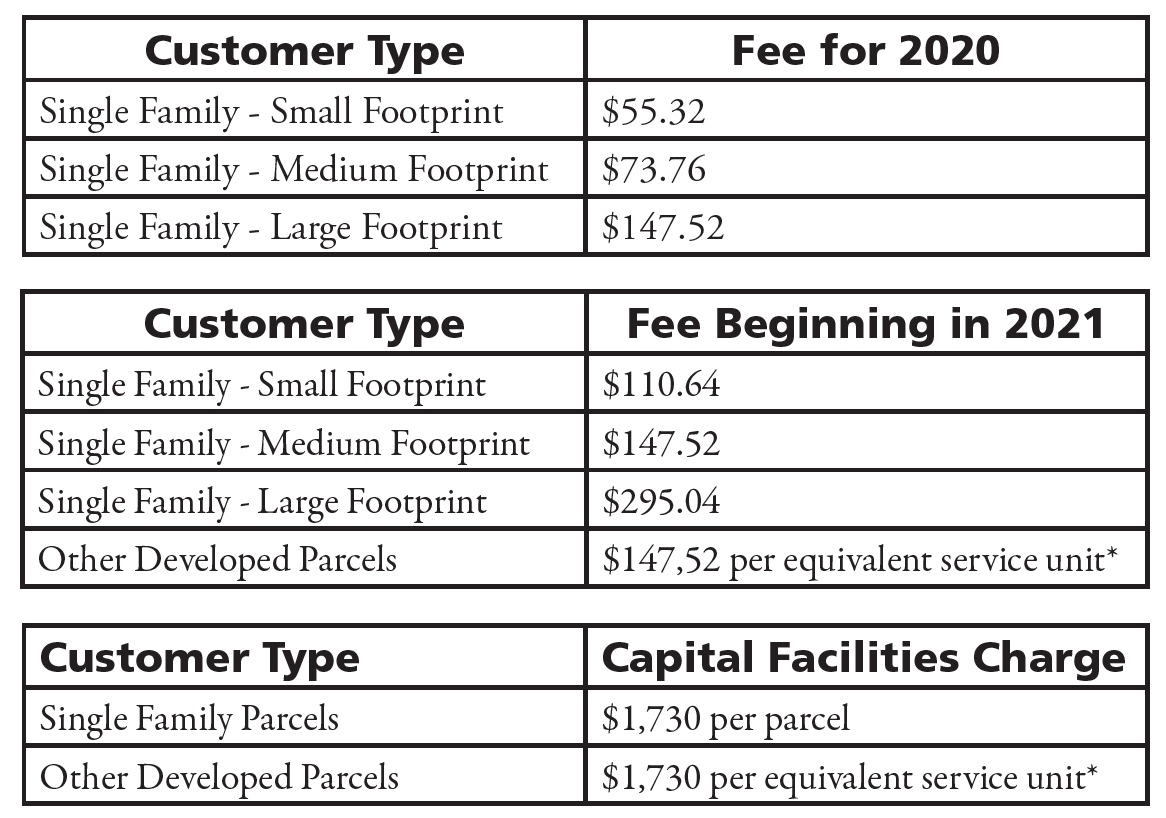 *a configuration of impervious surface estimated to contribute an amount of runoff to the county’s stormwater management system which is approximately equal to that created by the average single-family residential developed parcel in the service area.

153. Add $360,000 in expenditure authority (amendment #3) to the project-based budget of the Agate Heights Estate/Bay Lane storm water improvement project? At the 11/25/2014 meeting, vote #232, the council established the improvement fund and project-based budget, approved amendment #1 at the 11/22/2016 meeting, vote #218, and amendment #2 at the 4/24/2018 meeting, vote #66. The project treats runoff from approximately 90 acres through installation of bio-infiltration swales, construction of cartridge treatment vaults, and channel stabilization. This amendment will continue second phase development of the project, which is listed as item no. 1 on the 2019-2024 six-year water resource program. This amendment brings the total contact to $1,308,219. AB2019-376 (Ordinance 2019-054) Adopted 7-0

155. Amend the scope of the Whatcom County Incarceration Prevention and Reduction Task Force? The task force has 22 permanent members and eight appointed members. At the 6/9/2015 meeting, vote #108, council created the task force to make specific recommendations for safely reducing the number of incarcerated individuals experiencing mental illness and chemical dependency, as well as those pre-trial defendants who can be safely released, and at the 7/11/2017 meeting, vote #129, council entered into a memorandum of agreement with the city of Bellingham to share task force costs. This amendment expands the task force to include identification, analysis, and recommendation of evidence-based incarceration-prevention interventions and policies. AB2019-389 (Ordinance 2019-056) Substitute adopted 7-0

1. From Barbara Brenner: I opposed the Cherry Point interim moratorium on exporting unrefined fossil fuels because it was supposed to only be for unrefined fossil fuel, which I support, but it also included materials that are not unrefined such as propane, butane, and natural gas (an extremely clean fuel). I would like to see more refining done in the United States instead of shipping any unrefined fossil fuel off North America, especially shipments to Asia, including China. For many years I have researched wild salmon. During my research I found wild salmon are being very negatively impacted by processing/refining in Asia (having few regulations), which has caused lots of acidity and other pollution to come our way by the prevailing winds and currents. Although people here don’t see that pollution, it is still a huge problem! Our regulations are much stronger, our refineries are much better, and treatment of their employees is very good. If it isn’t refined here it will be refined somewhere else, especially Asia, and would likely increase the pollution we receive.

2. From Barbara Brenner: I don’t support granting franchises to water associations that don’t appear to treat residents fairly in responding nor in charging them. However, our attorney claims the council doesn’t have the authority to negotiate these issues with an association, which makes no sense to me since we have the authority to grant or not to grant a franchise.

3. From Barbara Brenner: Before we grant franchises to water associations I believe we should negotiate fair treatment for the residents. However, I have never gotten a complaint regarding this association.

4. From Barbara Brenner: I don’t support granting franchises to water associations in general because I don’t believe there are ample protections for residents who can be forced to use services unnecessarily and pay whatever an association wants to charge. But I have not had any complaints about this water association in particular so abstained instead of voting no.

5. From Barbara Brenner: I oppose the fee structure for the stormwater utility district for Lake Whatcom because it provides little incentive for residents to reduce/eliminate runoff from their properties. I would only support a fee that did not charge anyone who is doing a good job of preventing runoff from his/her property.

6. From Barbara Brenner: I abstained from the budget request for the same reason as the the stormwater utility funding.

7. From Barbara Brenner: I abstained because I had questions regarding removal of hazardous trees and there was no staff person at the meeting to answer them.