What Can We Do? Renewable Energy and Energy Efficiency

What a difference a decade makes.

In the summer of 2008, then-congressman Jay Inslee (D-WA) grilled commodity traders and oil execs as to why crude oil had rocketed to $146 a barrel. (1) Gasoline had hit $4.11 a gallon and U.S. citizens were getting gouged, while the oil-rich states siphoned cash from the rest of the developed world at truly alarming rates. (2)

Just months later, a global financial collapse burst that bubble, creating the deepest recession since the 1930s. But as economies recovered by 2012, oil again topped $100 a barrel, re-igniting the enormous wealth transfer. And this time it seemed unstoppable. (3)

However, oil prices depend on a tight balance between supply and demand because oil is consumed fairly quickly and few nations keep large, above-ground oil reserves. This means a 1 percent uptick in supply can dramatically lower oil prices. (4)

By 2012, other dramatic trends in renewable energy had appeared. The levelized cost of electricity (LCOE) over a wind farm’s life cycle had already dropped below that for coal and nuclear. And solar prices were continuing their exponential decline.

Then U.S. Department of Energy Secretary Stephen Chu and colleagues realized that federal investment could hasten both trends to fuel a serious attempt at U.S. energy independence. Chu announced a new ‘all of the above’ energy policy that included renewables. This enraged environmentalists, as ‘all of the above’ also embraced nuclear power and fracking. (5–7)

However, the new policy was also designed to restore economic and geopolitical balance vis-a-vis the oil-rich states. The mainstream media ignored this side, perhaps because it was never publicly declared. Thus, it remains a story largely untold. (8)

Nonetheless, two of Chu’s policy prongs were hugely successful. Oil prices plummeted to as low as $26 a barrel, eventually stabilizing around $55 – $60. And the dramatic price drop had its intended effect. It drained or strained the coffers of those with agendas often opposed to U.S. interests. These included ISIS, Iran, Venezuela, Russia, Saudi Arabia, Nigeria, Exxon, Koch Industries, and even PM Stephen Harper’s Tory/Canadian government. (9-17)

On Renewables
Now the landscape has shifted. Five years ago, battery prices were falling but only modestly, while natural gas was about to replace coal as America’s main electrical power source. However, wholesale prices for U.S. utility-scale renewable energy have also dropped so quickly that unsubsidized wind and solar are now cheaper than coal. And battery storage prices are falling exponentially as well. Thus, recent utility power purchase agreements for wind and/or solar, combined with battery storage, have dropped as low as 4 cents per kwh (kilowatt-hour), below the price of coal power and fully competitive with natural gas. 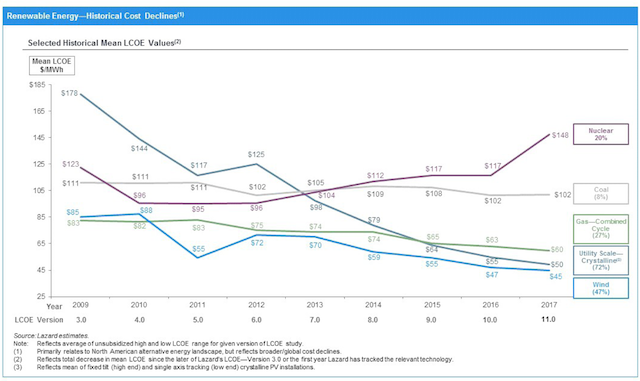 So, it now seems that natural gas will be a transition fuel to tandem eventually with batteries as ‘peakers’ to help span longer gaps in wind and solar power. That’s because gas turbines need tens of minutes to rev up fully, while batteries will fill the shorter gaps with their ability to discharge at full power in milliseconds. (18–26)

Competitive prices also bring competitive jobs. By 2016, there were 100,000 jobs in wind energy versus 50,000 in coal. And solar was growing 17 times faster than the rest of the U.S. economy, adding another 260,000 jobs. Within the electricity sector, there are now five times as many jobs in energy efficiency and renewables as in fossil fuels, (27–28) according to the Solar Foundation.

Beyond land-based, offshore winds are stronger, steadier and grow with increasing hub height — the distance from the base to the rotor — faster than those onshore. So, their energy potential is truly enormous. Studies show that the accessible wind energy offshore is two to four times greater than all U.S. electrical needs. (32–36)

It’s true that offshore wind farms have been roughly twice as expensive per unit of energy delivered as those onshore. Yet, offshore pricing has also dropped like a stone. The Euros, especially Brits, lead the fledgling U.S. offshore wind industry by more than a decade, with giant turbines up to 9.5MW, i.e., two or even three times larger than those onshore. Their latest project features a wholesale power purchase agreement for 3.2 GW of offshore wind energy at 7.5 c/kwh. During a two-year span involving no big breakthrough technology, that’s a 50 percent cost cut — cheaper than nuclear and fully competitive with coal. (37–38) 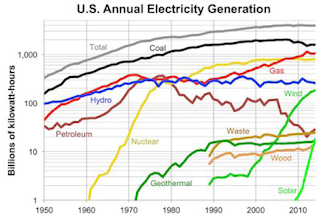 Then again, not all “all of the above” policies have borne fruit. Nuclear has plateaued at 20 percent of U.S. electricity generation, with further development all but missing. Despite promising to usefully reprocess nuclear waste, Chu’s touted Integral Fast Breeder reactors have stalled world-wide due to mounting costs and technical problems. (39–40)

Huge cost overruns have also plagued the conventional U.S. reactor industry for decades. During the 1980s, our state’s own Washington Public Power Supply System (WPPSS, renamed Energy Northwest) suffered a $2.25 billion bond default, with four of five reactors left unfinished and eventually scrapped, a quite typical story. (41–42) Of 253 U.S. reactors ordered from 1953 to 2008, 120 were canceled; construction of 28 ended prematurely, and 35 have experienced at least annual outages. Only 68 of the 133 completed still operate reliably. And this summer’s Westinghouse bankruptcy casts severe doubt on the only two remaining U.S. reactor projects. (43–45)

Even without decommissioning costs, perhaps half of our nuclear plants lose money just on operations. In the aftermath of Three-Mile Island, Chernobyl and Fukushima, and much cheaper natural gas, wind and solar power, nuclear energy has become prohibitively expensive. Per dollar invested, it’s fair to say that U.S. nuclear power has been an unmitigated financial disaster. (46)

Other Energy Hiccups
While conservation is nearly always cheaper than new energy, China has been hell-bent on its own ‘all of the above’ energy policy. However, for years it let corner-cutting developers build hundreds of millions of poorly or wholly uninsulated housing units for its newly urban work force. (47) By comparison, U.S. buildings are much better insulated. Whatcom County’s building code, for example, requires a minimum of R-13 for walls and R-49 for ceilings.

Yet, space heating and cooling still consume about 20 percent of U.S. energy. (48–49) Meanwhile, at 30 percent of the global total, China’s CO2 emissions are now double that of the U.S., even while its uninsulated buildings may stand another 50 years. (50)

Closer to home, 78.3 percent of Washington’s utility scale electricity comes from hydropower. (51) So, cheap hydro is why, at an average 9.67 c/kwh (cents per kilowatt hour), Washington has the second lowest residential rates in the nation (Puget Sound Energy charges us about 10.36 c/kwh). Then again, hydro turbines suffer startup/shut down power lags and attendant mechanical stresses similar to those using natural gas. This may be contributing to a recent three-year lull in building more Washington wind farms. So, we’ll see if the advent of cheap battery storage lifts the lull. (52) That said, as with China, another factor may be that Washington’s wind farms have outstripped the local electrical grid’s current ability to distribute the energy. (53) 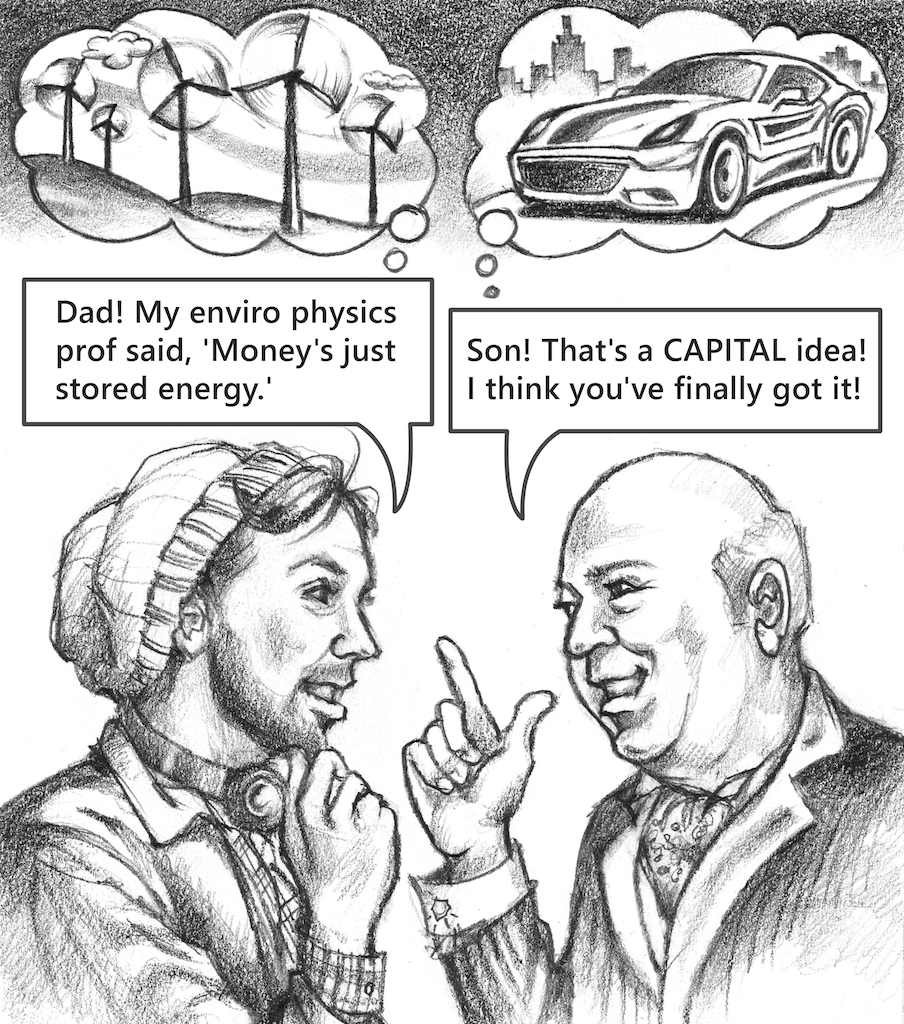 But again, nothing drives energy decisions like money. That is, given this article’s title, “energy efficiency” isn’t limited to conservation; it is really about the efficient use of money, which is really just a consensus proxy for stored (potential) energy — the ability to do work and initiate change. So, don’t miss the forest for the trees. In 2016, renewables garnered 43 percent of all global energy investments and 2/3 of all new electrical capacity. (54–55)

I know what you’re thinking. “Ok, great! But can we curtail global warming fast enough?” I’m guessing maybe not, but still, way better late than never. Here’s why.

CO2 Mitigation
Given a 10-year lag between CO2 level and maximum temperature, (56) we probably have less than 20 years before we’re certain to breach the ominous 2.0-degree C. limit mentioned in Part I of this Whatcom Watch series [October/November 2017]. Again, above that point, global warming’s impacts get pretty ugly and keep getting worse as temperatures rise.

If so, it’s clear that none of the fancy physics projects: tokamak, (57) laser inertial confinement, (58) or polywell fusor-type nuclear fusion, (59) thorium/molten salt reactors, (60) Integral Fast Reactors, (61) or traveling wave fission reactors, (62) etc. (63) will deploy fast enough to keep us below a rise of two degrees C.

The Intergovernmental Panel on Climate Change simulations say we need “negative emissions;” not just mitigation via renewable energy, but direct CO2 removal from our air. Yet, the numbers are daunting. For example, sunlight and photosynthesis are essentially free, but to remove CO2 through reforestation would require a total area larger than India. (64)

Carbon Capture and Storage (CCS)
More mechanistic ways exist to remove atmospheric carbon, but entropy is implacable. That is, it’s very costly, energy and money-wise, to remove CO2 after it gets fully diluted to 0.04 percent. That is, even on-site carbon capture and storage (CCS) at fossil fuel burning plants typically doubles the cost per energy delivered, rendering it unprofitable. And the biomass energy with carbon capture and storage (BECCS) idea, touted lately, is even more expensive than CCS. (65–67)

Stratospheric Aerosol Injections
Part I also mentioned that major volcanic eruptions cool us by injecting large amounts of reflective sulfur aerosols into the stratosphere, thus dimming surface sunlight. Beyond the enormous challenge of global scale deployment, pollution looms large because, to be effective, the aerosol injection would need to be continuous. (68)

Iron Seeding the Seas
Much of natural CO2 removal depends on phytoplankton, which are sparse in some seas due to low iron content. The few legal and illegal iron seeding studies conducted have yielded mixed results. Sometimes it worked for a while. Other times, the area was also low on other nutrients. Overkill in the form of toxic red tides is another hazard. Effective seeding involves more factors than first thought. (69)

A Space Lens
Another idea is to launch a 1,000 km. diameter, millimeters-thin fresnel lens — akin to those in car headlights — to be unfurled at the zero gravity (Lagrange) point between the Earth and Moon. Such a lens would theoretically block enough sunlight to reverse the roughly 400 terawatt imbalance in Earth’s radiation budget. A bigger project than the Hubble Telescope, but it may be technically doable. Then again, talk about a solar sail! No one’s told me how a low mass/huge area device can stay at a Lagrange point despite continuous solar photon pressure. If it fails, undoing it may be a nightmare. But at least the climate modelers would have a field day with simulations. (70)

Given global foot dragging, let alone our current administration’s reality-denying attitude, none of the above fixes seem likely at significant scales any time soon. For the next two decades, I think we’re stuck with the usual suspects — wind, solar, and batteries.
It’s a question of ramp-up time. The U.S. Energy Information Administration forecasts that we won’t make it. Then again, they’ve been consistently wrong, and we’ve suddenly plateaued at 36 gigatons of CO2 emissions for the past three years. So, although our chances seem to be dimming, I think we’re still at maybe. (71–73)