This column will be an occasional one. The plan is to review some of the organisms that fall into the general category of “cryptogam” (Greek for “hidden marriage,” referring to their microscopic reproductive cells). The cryptogams include some plants (ferns and mosses and their allies), lichens, fungi, algae and perhaps some bacteria. Most people haven’t heard much about these, even if they majored in biology in college. But they often are important players in environments; they have fascinating ways of “making a living” and often provide humans with economic or environmental benefit, and, unfortunately, harm.

Each column will cover one organism common in our area and some of the topics that come to mind when I consider the species. I will write about what fascinates me about them but I would like to know if there are any particular species or topics you are particularly interested in. Write to me, care of Whatcom Watch: editor@whatcomwatch.org.

By the way, the name for this column came from Saul Weisberg, executive director of the North Cascades Institute, who suggested it for a field seminar I used to give through NCI.

Usnea quasirigida
Usnea quasirigida (common name: eyed beard) is a lichen that has become quite common in our area. It is the only local Usnea that has the cups (apothecia, middle photo) that produce sexual spores. This species is usually found along trails and on the ground under the trees as litter fallen from above (more about habitat below).

A bit about scientific names, which I use since common names aren’t always available for the cryptogams or in common usage. As for the scientific names of all organisms, the species name is a binomial, Usnea quasirigida. This is a species in the genus, Usnea. You can pronounce this OOS-nia or US-nia, depending on who your teacher was; I say US-nia. 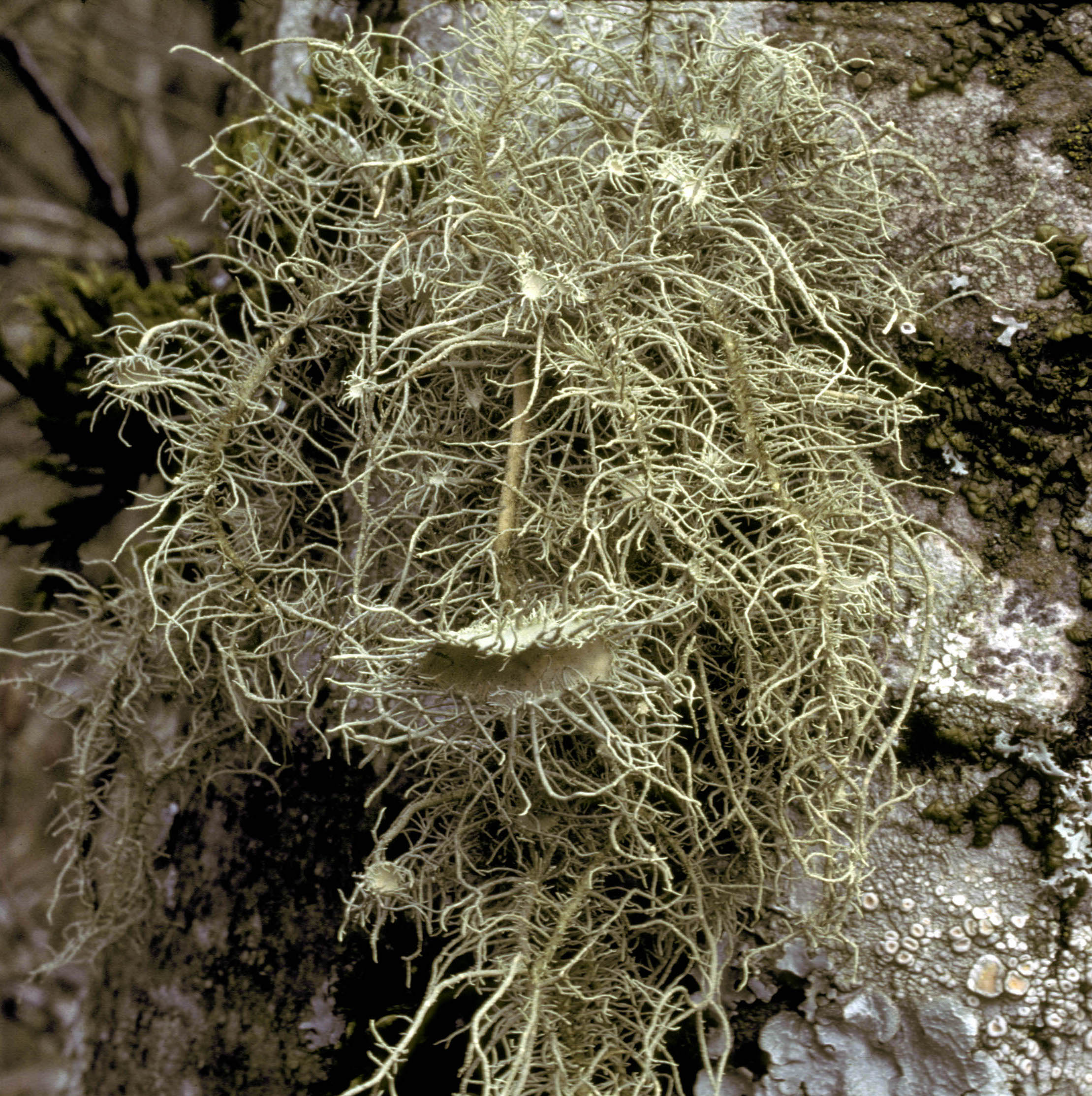 Usneas are lichens that are bushy or dangling, composed of round strands that are yellow-green and have a resistant, stretchy central cord, something like a bungee cord (see photo below). Usnea species are very common and quite diverse, but often difficult to identify to precise species. The species epithet (quasirigida) of our subject refers to the fact that this species isn’t quite the same as Usnea rigida. Why? we’ll get to that below. 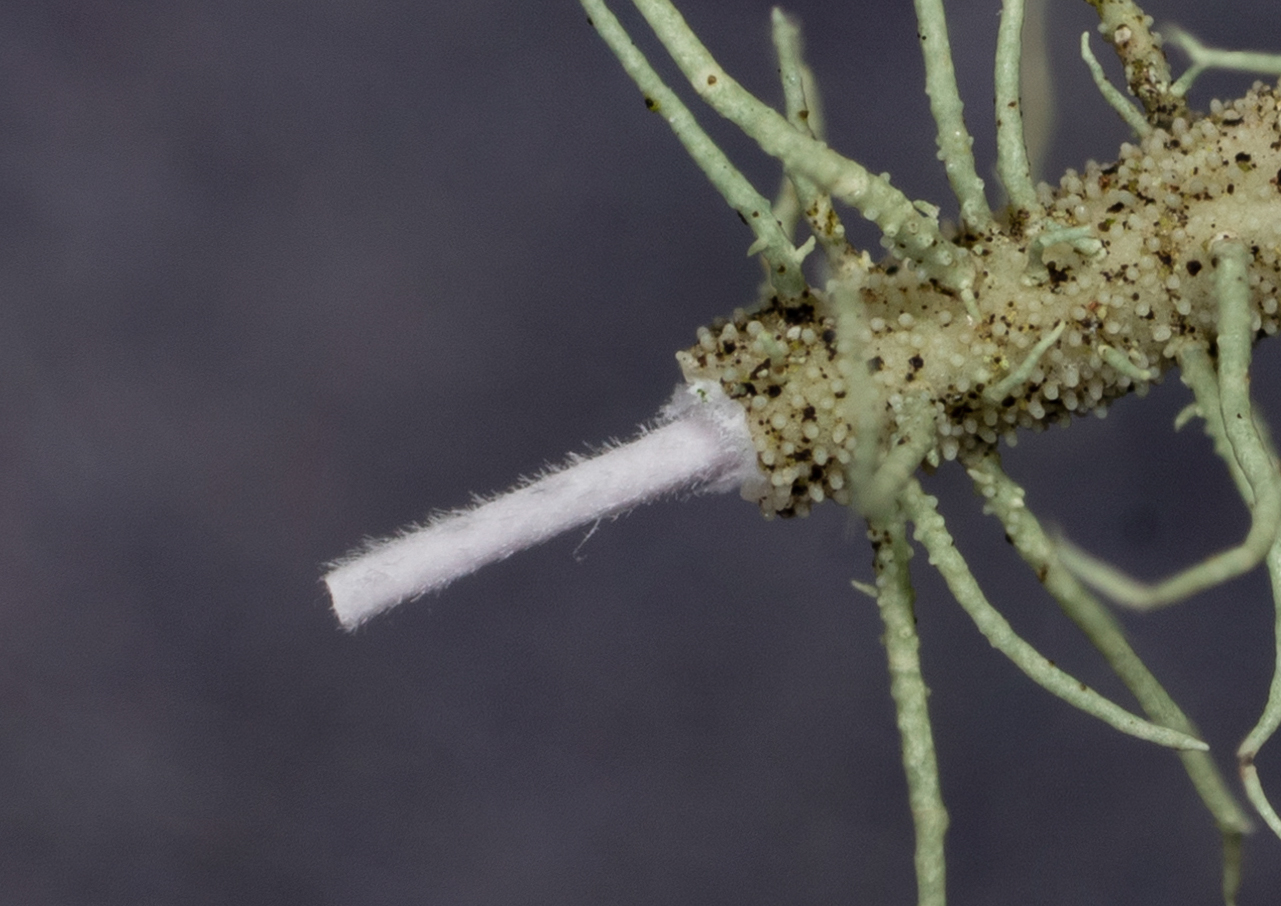 First, a little history. In the 1980s, when I was first teaching at WWU, I took students on a field trip to share the expertise of the University of British Columbia’s world-renown bryologist, Wilf Schofield. We were looking at mosses up in the Fraser River valley (mosses are cryptogamic plants totally unrelated to lichens). We stopped at Bridal Veil Falls Provincial Park on the south side of the valley, not too far from the U.S. border in the mountains there. I was amazed to see a huge number of this species of Usnea on the trees there.

Although other Usnea species are extremely common here, I had never seen Usnea quasirigida in Whatcom County in all my collecting since coming to WWU in 1977. So, I started keeping my eyes open for it. One day a number of years later (in 2000), on another field trip around Lake Padden, I finally spotted a single one growing head-high on the trunk of an alder beside the trail (photo above is the picture I took of it). The students along with me thought I was nuts, but I was excited since I hadn’t been able to find it since the Fraser River trip over 10 years before.

Gradual Sightings
Slowly, the species began showing up more and more frequently. A graduate student found it on Sehome Hill. It appeared on a tree in Washington Park near Anacortes. At first, sightings were rare. However, over the last 20 years, Usnea quasirigida has become extremely common here. A hiker in the Chuckanuts or up Lummi Peak (on Lummi Island) will undoubtedly find it. Reliable reports show the species exists as far south as the Swinomish Reservation on Fidalgo Island.

Other, secondhand reports describe it as occurring near Olympia. It certainly is not common south of Skagit County, yet it appears to be extremely common now in Whatcom County. Why is this? Let’s talk about what lichens are and how they live. That might present some clues.

Lichens appear to be single things, much like a single moss plant, a seaweed or a mushroom. However they are a mixture of several organisms. The overall structure of a lichen is built from fungal elements. Fungi, like animals, need a source of carbon compounds since they cannot make such food with the sun’s energy and photosynthesis. So lichens also contain layers of single-celled green algae or blue-green bacteria (or both). As people study lichens more and more, they are finding more inhabitants in each.

Last year, the lichen-loving world was shaken by the discovery that many (maybe most) lichens include yet another species, another fungus that lives as single cells, growing like yeast among the two (or three) known parts. The roles of these yeast components are unknown, but, since they are there, they likely provide some abilities that the other components don’t have. So lichens end up being miniature ecosystems that function as single organisms.

The combinations are very successful. Lichens live in the harshest environments on earth, deserts and Arctic and Alpine rocks, where sometimes no other groups can survive. They also abound in our local area with its alternating warmer, dry and colder, wet seasons. Worldwide, there are at least 15,000 described species (and many more waiting to be described). In the Pacific Northwest there are over 2,000. 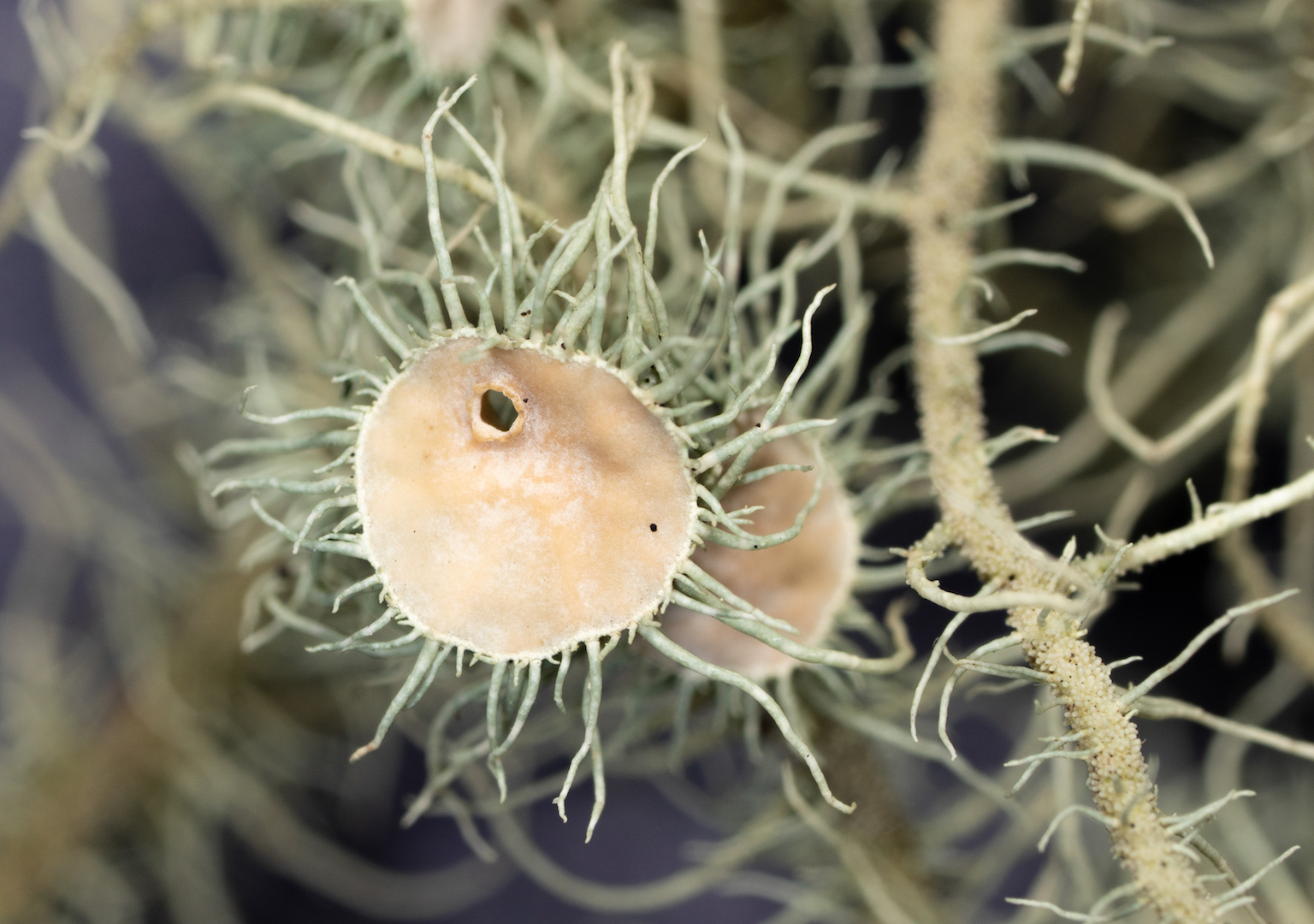 The lichen body is called a thallus, which is just a term that means plant-like without true stems, leaves and roots. Lichens are opportunists that require only a foothold and occasional access to rainwater, which supplies them with all the minerals they need. And the algal residents supply the carbon molecules.

Lichens have no roots, only points of attachment to their substrate, or they may dangle loosely among needles or leaves without attaching firmly to anything. East of the Cascades there are “vagrant” lichens that have no attachment and roll around like tumbleweed. The sponge-like structure of the fungal parts and the food-making algae combine their talents to keep the species alive. By international agreement, the scientific name of a lichen species is the name of the fungal component. However, the fact there may be two fungi in each lichen is going to require some new agreements.

Back to Usnea quasirigida. When I first saw this up in British Columbia, it was being called Usnea rigida, another apotheciate (with cups) species now known only from Europe. In North America, there are several other apotheciate species in the northeast, southeast, California and elsewhere in the southwest. Further study of these and other Usneas showed that the local species is distinct chemically and genetically and deserves its own species name.

Chemistry is an important part of lichen identification. The fungus part produces chemicals that help the lichen maintain itself. These are often complex, but weak acids that may help make the thallus less palatable to would-be consumers and also help bind minerals that are in dilute amounts in the rainwater that falls on them. Among the chemicals is usnic acid, which is found in every species of the genus. It turns out that Usnea quasirigida is both apotheciate and contains unique chemicals in addition to the usnic acid.

Usneas have a long and culturally diverse history of traditional use as medicine. There has been considerable scientific study to back up traditional claims of the use of Usnea as an antibiotic and anti-inflammatory. However, the subject is a tricky one. Because every species of Usnea is different chemically and studies haven’t always distinguished which species are studied, nor how chemicals were obtained from collected material, it is difficult to know exact effects, or potential side effects from unknown chemicals.

Usnic acid is sold as a tincture locally (check the Community Food Co-op) and is just one of the chemicals in Usnea that is likely active medicinally. I refer you to your local naturopathic doctor and to Robert Rogers’ “The Fungal Pharmacy” for further information.

Substrate and Microclimate
So why is Usnea quasirigida becoming so common? No one really knows the answer to this question. Likely, the species is moving the short distance into our area because of changes in substrate availability and/or climate. Each lichen has a preferred habitat which combines both the nature of the substrate and the nature of the microclimate around the substrate. An alternative hypothesis might involve a genetic change in the species that allows it to live farther south than it was before.

The preferred substrate for Usnea quasirigida appears to be the outer, upper branches of hardwood trees like alder and bigleaf maple. There may be a change in the numbers of these trees in our area as successional forests grow up following the logging off of the conifers that dominated our area over 100 years ago. Reproduction (see next column) into these newly common forests of our westernmost areas may lag behind the actual availability of these substrates.

The microclimate is the pattern of changes in sunlight, moisture and temperature surrounding these substrates. We hear a lot about climate change these days, and the gradual changes in regional climate may affect the microclimate that Usnea quasirigida must live in in complex ways that, relatively suddenly, make a given area appropriate for a species when it wasn’t appropriate before.

The ability of the species to produce new young also plays a role in whether or not a species is present in an area. Although this species hasn’t been studied, its reproduction likely involves fragmentation and the spores of the fungus produced in the apothecia.

Fragmentation happens when little bits of the side branches of the thallus break off and are carried by wind or animal feet to another suitable location. Each fragment would have all the necessary partners, so this should work rather efficiently. On the other hand, reproduction by fungal spores requires that a spore find its necessary partner(s) on the new substrate so the group can grow into a new thallus.

Without some detailed study, we can’t really know why there are now more Usnea quasirigida in Whatcom County. The reason probably involves some combination of the factors listed above. In any case, we are the benefactors of this increase, as this lichen is a beautiful one.
_______________________________

Dr. Fred Rhoades grew up in upstate New York and did graduate studies in both mycology and lichenology at Oregon State University and the University of Oregon in the 1970s. For his master’s thesis and Ph.D. dissertation, Fred studied the growth rates and population biology of the important northwest lichen, Lobaria oregana. From 1977 to 2009, Fred was an instructor of biology at Western Washington University where he taught a variety of courses until retiring. He currently lives in Bellingham and continues to give occasional programs and field trips. Otherwise, Fred spends much of his field time photographing cryptogams and the odd animal and higher plant.